The number of core threads in the thread pool. When a task is submitted, a new thread will be created to execute the current task. Know that the number of threads is equal to corePoolSize

It is used to save the queue of tasks waiting to be executed. The task must implement the Runable interface. The JDK provides the following blocking queues

The above four strategies are internal classes of ThreadPoolExecutor. Of course, the RejectedExecutionHandler interface can also be implemented according to the application scenario to customize the saturation strategy, such as logging or persistent storage of tasks that cannot be processed. 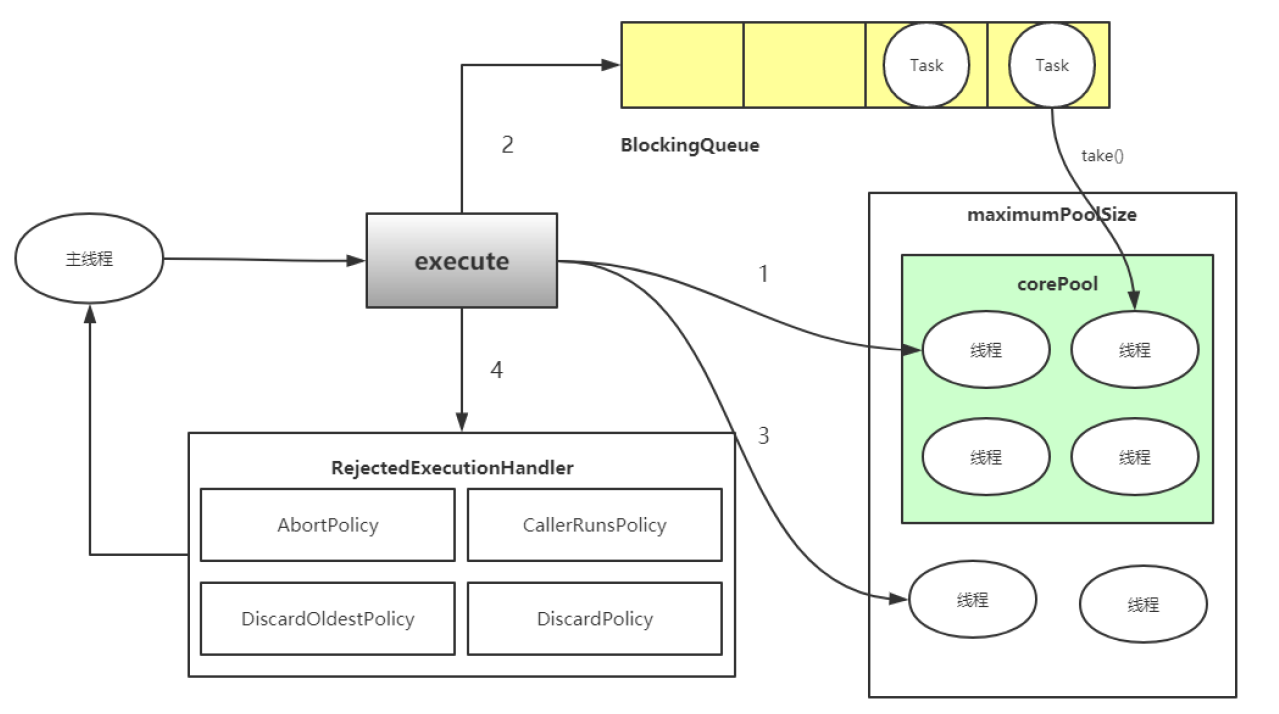 Simply put, when executing the execute() method, if the status is always RUNNING, the execution process is as follows:

Note that addWorker(null, false);, That is, a thread is created, but no task is passed in. Because the task has been added to the workQueue, the worker will directly obtain the task from the workQueue when executing. Therefore, when workerCountOf(recheck) == 0, execute addWorker(null, false); In order to ensure that the thread pool is in the RUNNING state, there must be a thread to execute tasks.
The execution process of execute method is as follows: 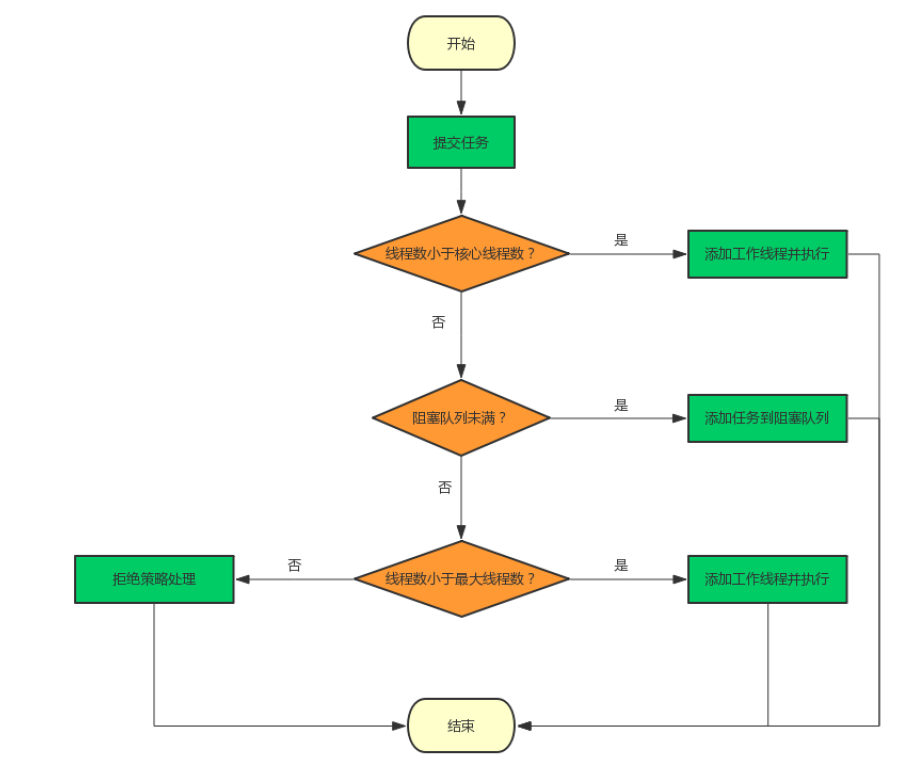 Each thread in the thread pool is encapsulated into a worker object. ThreadPool actually maintains a group of worker objects.
The Worker class inherits AQS and implements the Runnable interface. Note the firstTask and Thread attributes:

When calling the construction method, you need to pass in the task through getthreadfactory() newThread (this) to create a new thread. The parameter passed in the newThread method is this, because the Worker itself inherits the Runnable interface, that is, a thread. Therefore, a Worker object will call the run method in the Worker class when it is started
Worker inherits AQS and uses AQS to realize the function of exclusive lock. Why not use reentrantlock? You can see that the tryAcquire method does not allow reentry, while reentrantlock allows reentry:

Therefore, Worker inherits from AQS and is used to determine whether a thread is idle and can be interrupted.

In addition, setState(-1) is executed in the constructor;, Set the state variable to - 1. Why?
This is because the default state in AQS is 0. If a Worker object has just been created and the task has not been executed, then
It should not be interrupted. Take a look at the tryAquire method:

The tryAcquire method determines whether the state is 0. Therefore, setState(-1); The state is set to - 1 to prevent the thread from being interrupted before executing the task. Because of this, in the runWorker method, the unlock method of the Worker object will be called first to set the state to 0

The run method in the worker class calls the runWorker method to execute the task. The code of the runWoker method is as follows:

The beforeExecute method and afterExecute method here are empty in the ThreadPoolExecutor class and are left to be implemented by subclasses
The completedAbruptly variable indicates whether an exception occurs during task execution. The value of this variable will be judged in the processWorkerExit method

The getTask method is used to get the task from the blocking queue. The code is as follows

The important part here is the second if judgment, which aims to control the effective number of threads in the thread pool. As can be seen from the above analysis, when executing the execute method, if the number of threads in the current thread pool exceeds corePoolSize and is less than maximumPoolSize, and the workQueue is full, you can increase the number of working threads. However, if no task is obtained during timeout, that is, when timedOut is true, it indicates that the workQueue is empty, This means that there are not so many threads in the current thread pool to perform tasks. You can destroy more threads than corePoolSize and keep the number of threads in corePoolSize.
When will it be destroyed? Of course, after the runWorker method is executed, that is, after the run method in the Worker is executed, it is automatically recycled by the JVM. When the getTask method returns null, the while loop will jump out of the runWorker method, and then the processWorkerExit method will be executed 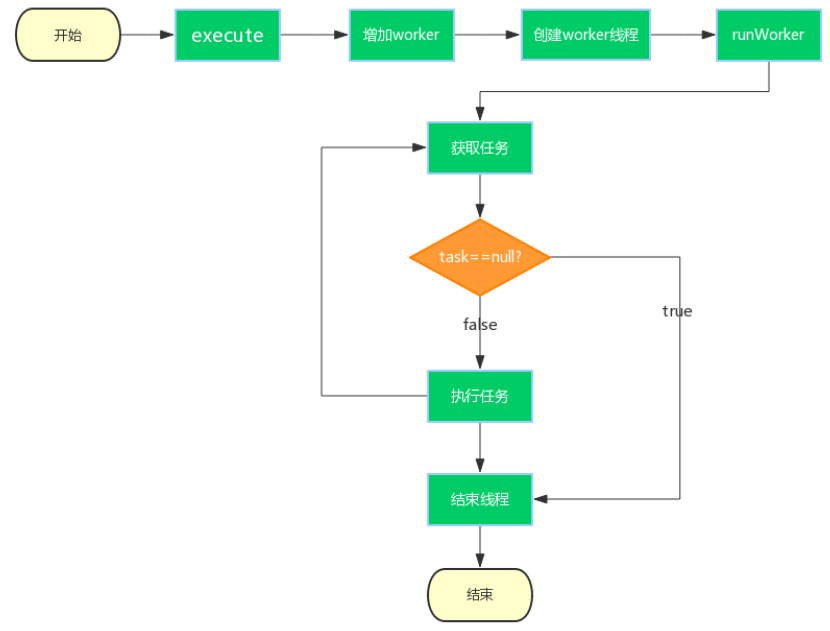