CAP principle and BASE theorem

CAP is the acronym combination of Consistency, Availability and Partition tolerance. It is a priority for designers of all distributed systems before design. 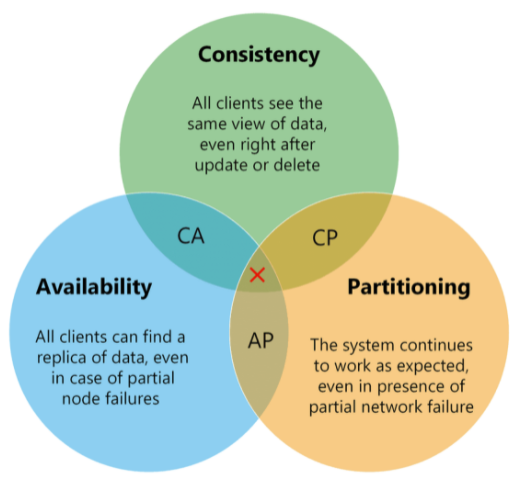 It is illustrated by an actual case. Take order system and inventory system as an example

In the actual business, the creation of orders will be accompanied by the reduction of inventory. In the original single architecture, these are two modules in one application. However, with the development of business, the pressure on the inventory module increases, the architect splits it into a new inventory system, and the inventory data is also stored in a separate database. The two systems communicate through the network, Naturally, the architecture pattern has also changed to distributed. But at the same time, the system failure probability is also increasing after adding network communication. Architects must consider the fault tolerance after applying "partition", which is the meaning of P partition fault tolerance in CAP. Partition fault tolerance is a factor that must be included in any distributed system.

So how to deal with it? There are two options:

CAP itself is mutually exclusive, and only two of them can be selected. Ca, AP and CP have their own application scenarios, which should be selected in combination with the actual situation. For example, because CA does not consider partition tolerance, So all its operations need to be completed in the same process (that is, what we often call single application); because AP gives up data consistency, it is suitable for projects that do not require high data but emphasize user experience, such as blogs, news information, etc.; on the contrary, CP gives up availability and is suitable for trading systems with high data requirements, such as bank transactions and e-commerce order transactions. Even if users wait for a long time, they should ensure the integrity and reliability of data .

The above is the application of CAP principle in practical projects. For Internet applications, it is not advisable to completely give up data consistency for user experience. After all, data is fundamental. How to solve it? This leads to a new theory: BASE theorem.

The BASE theorem is basically available, Soft State and Eventually Consistent (final consistency) is the abbreviation of three phrases. BASE is the choice after weighing the consistency and availability in CAP. It comes from the conclusion of distributed practice of large-scale Internet system. It is gradually evolved based on CAP theorem. Its core idea is that even if consistency cannot be achieved, each application can adopt appropriate methods according to its own business characteristics The system achieves final consistency.

BASE allows the existence of soft state. The so-called soft state is the intermediate state when the order increases but the inventory does not decrease in the above case. In the subsequent remedial measures, the task thread compensates the inventory. At this time, the data is finally consistent, and the state at this time is the final consistency state. BASE theorem only requires to ensure that the data is ultimately consistent, so there is an intermediate soft state.

There are many measures to ensure the final consistency, such as TCC, task timing check, MQ message queue buffer, ETL day-end proofreading and even manual supplementary recording. Among these strategies, TCC is a consistency implementation scheme commonly used by architecture teachers. Let's first understand what TCC is.

TCC is the acronym of three letters Try, Confirm and Cancel. TCC does not refer to a certain technology, but a data consistency scheme. It divides the distributed processing process into two stages:

When all resources of the two systems are locked, enter the second stage to execute the confirm operation. Confirm is used to submit data. The process of submitting data is very simple. Move the pre increased amount in the order table to the order amount, the order status changes to completed, and the commodity inventory decreases accordingly.

The above is the implementation process of TCC in the actual project. You can find that TCC works on the data source and ensures the data consistency by adding additional locked resource fields on the control table. What are the precautions in the TCC scheme?

First, we should complete most of the business logic in the Try phase and do as many things as possible in the Try phase. At the beginning of TCC design, it is considered that Confirm or Cancel must be successful. Therefore, do not include any business code or remote communication in phase II, and release frozen resources only through the simplest code. Like this case, Confirm or Cancel only executes the update statement on the table to release the frozen resources. The success rate of this operation is 99.9999%. You can think that the second stage is reliable.

Secondly, if an error occurs during the execution of Confirm or Cancel, the specific TCC framework will continue to retry the execution operation to try to ensure successful execution. In this process, the update statement may be executed many times, so pay attention to the idempotency of the code.

TIPS: idempotency means that the results of one operation and multiple operations are consistent, such as the following example.

#SQL without idempotency, because num will increase by + 10 every time it is executed in the retry process

#For idempotent SQL, no matter how many times you retry, the update result num is 1760

Finally, under the minimum probability, if Confim or Cancel fails after multiple retries, the final data inconsistency will occur, which requires developing additional data integrity verification programs to remedy or manually supplement.

Speaking of this, you must have an intuitive understanding of the TCC scheme, but the TCC scheme is a theoretical design after all, which needs the support of the manufacturer's corresponding framework. Famous TCC frameworks in the open source field of Java include ByteTCC, Hmily, TCC transaction and Seata. Yes, the distributed transaction middleware Seata we learned earlier also supports the TCC mode. Let's introduce the TCC mode of Seata.

For the TCC mode of Seata, it is highly similar to the AT mode. It can be understood that TCC is the "manual version" of AT mode. All operations during commit and rollback should be handled by writing code, rather than automatically executing reverse SQL to complete commit and rollback like AT. 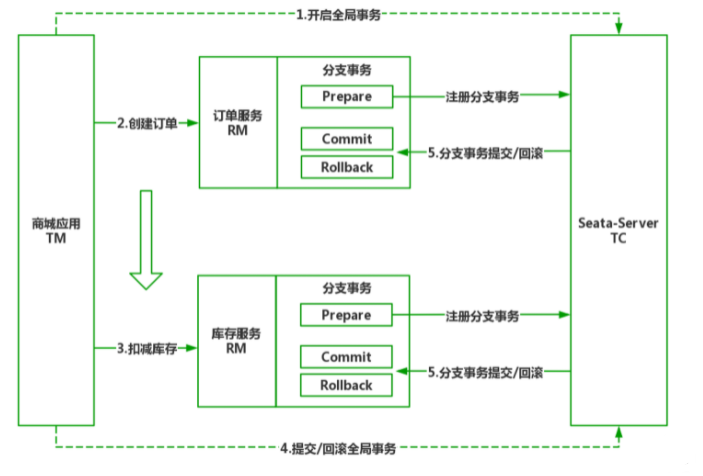 The execution steps and pseudo code are combined to explain the execution of Seata TCC mode.

Accordingly, if the sale method of TM fails to execute, the global transaction will be rolled back, and the rollback methods of OrderActionImpl and StorageActionImpl will be executed automatically to realize the rollback operation.

During the execution process, if the commit or rollback fails, Seata will try again and again to ensure the success of the operation as much as possible. Therefore, idempotency check should be done well.

How to choose between Seata AT and TCC

Since Seata already has AT mode, why introduce TCC to ensure transaction consistency? In the distributed transaction {Seata AT mode, have you ever considered that in complex enterprise applications, it is impossible to completely require the underlying database to use MySQL uniformly, or even ensure that all data sources support transactions.

Similar problems have been encountered before. After the user uploads the file, the system is abnormal and needs to be rolled back globally. When rolling back, the file needs to be deleted. At this time, reverse SQL based on Seata AT mode is powerless. TCC can solve such problems well, because all logic in the TCC process is controlled by programmers through code, which can well solve such non transactional data processing scenarios.

How should Seata AT and TCC choose? This depends on the specific business scenario. If transactional relational databases such as MySQL and Oracle are used AT the bottom of all services involved, and the business is direct operation on the database, the AT mode can achieve distributed data consistency as soon as possible. However, if the operation of non transactional resources is involved, the AT mode can do nothing, TCC must be used to implement the details of preparation, submission and rollback, but this undoubtedly puts forward higher requirements for the ability of programmers. Therefore, try to arrange these tasks to the core engineers with good technology in the team.