The embedded environment is generally low configuration, partial to hardware, the bottom layer, tight resources, the code is mainly C language and assembly, and the code application logic is simple. But with the advent of the AIOT era, the situation has changed. The performance resources of the chip are gradually improved, and the business logic is gradually becoming more and more complex. Compared with the efficiency of the code, the requirements of code reuse and portability are higher and higher, so as to obtain shorter project cycle and higher maintainability. The following is a common software framework for embedded devices in the AIOT era. 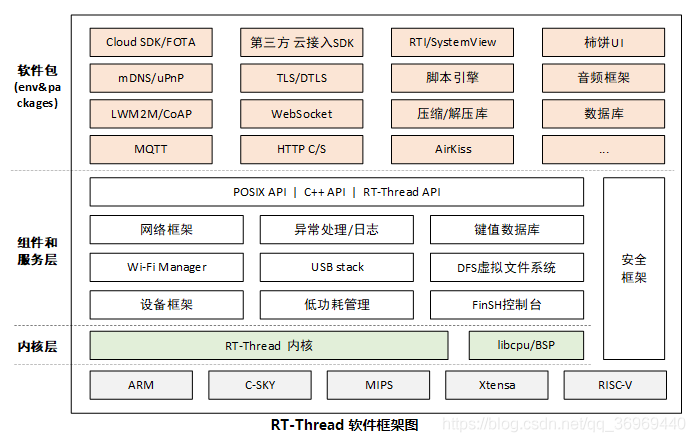 Design pattern: high-level language, high-end, architecture, etc. In the AIOT era, what kind of spark can design patterns and embedded make? The design pattern can be described as: for a kind of similar problems, after the continuous attempts of predecessors, the recognized and effective solutions to such problems are summarized.

Pattern trap: design pattern is an effective solution to some specific problems. Not all problems can match the corresponding design pattern. Therefore, we can't blindly pursue design patterns. Sometimes simple and direct treatment is more effective. For some problems, there is no appropriate mode, and some design principles can be met as much as possible, such as the opening and closing principle (open to expansion and closed to modification)

1. Observer mode: define a one to many dependency between objects. When the state of an object changes, all dependent objects will be notified automatically.

When the subject status changes, all observers will be notified. The observer can also set conditions to choose whether to receive the notification

When a timing event of the system arrives, the system is actively awakened to deal with the event

The system is asleep and awakened by external events. For example, the serial port receives a packet of data, the sensor detects the change and notifies the chip through the pin

Conditions under which the system allows sleep

There is no data being sent or received by the peripheral

Cache no data to process

Application layer state is idle (no events need to be handled)

Implementation of PM framework based on observer mode

PM power management can form a separate module. When the power consumption of peripherals increases, just implement the interface and register

By defining the segment export operation, the registration logic of the application layer or peripherals can be more simplified

Through the division of condition fields, it should be possible to realize partial sleep of the system

In real life, it is a common scene that an event (task) needs to be processed by multiple objects. For example, in the reimbursement process, the company's employees should first sort out the reimbursement form and check the reimbursement amount. If there is any error, continue to check and sort until there is no error. Submit the reimbursement form to the finance department for verification. After checking, judge the amount and quantity. If it is less than a certain amount, the finance department can directly approve it. If the amount exceeds the range, the reimbursement form will be circulated to the general manager, The whole task is not over until it is approved. There are many similar scenarios. For example, a WIFI module is configured. In order to connect the module to WIFI correctly through AT instructions, the configuration instructions need to be sent in a certain order, such as setting the setting mode, setting the WIFI name and password to be connected. Each configuration instruction is sent, the module will return the configuration result, and the sender needs to judge the correctness of the result, Then select whether to send the next instruction or retransmit.

To sum up, a series of tasks need to be processed in strict accordance with the sequential logic of the timeline, as shown in the figure below.

When there is a system, such logic can be easily realized by blocking delay, as follows:

In the case of bare metal, in order to ensure the real-time performance of the system, blocking delay cannot be used. Generally, timed events and state machine are used to realize:

/*Reply callback of task*/
void task_ans_cb(void* param)
{
if(task==task2)
{
task_state = task3;
process_task();
}
}
Compared with the system implementation, the implementation of bare metal is more complex. In order to avoid blocking, the logic of sequential delay can only be realized through status and timer. It can be seen that the implementation process is quite decentralized, and the processing of a single task is scattered into three functions. The consequences are inconvenient modification and transplantation. In practical applications, there are quite a lot of similar logic. If implemented according to the above method, it will lead to strong coupling of applications.

It can be found that the above scenario has the following characteristics:

Tasks are executed in sequence. The next task can be executed only after the current task has been executed (with conclusion, success or failure)

Tasks have some characteristics, such as timeout, delay time, and number of retries

From the above information, we can abstract such a model: tasks are nodes, and each task node has its attributes, such as timeout, delay, Retry, parameters, processing methods and execution results. When it is necessary to execute a series of tasks in sequence, string the task nodes into a chain in sequence and start the chain operation, then run from the first node of the task chain, and the operation results can be OK, BUSY and ERROR. If ok, it indicates that the node has been processed and deleted from the task chain. ERROR indicates that there is a running ERROR. The task chain will stop running and carry out ERROR callback. A user can decide whether to continue running. BUSY indicates that the task chain is waiting for response or waiting for delay. When all the nodes in the whole task chain have been executed, a successful callback is performed.

Necessity of using memory pool: in fact, AT the same time, the number of responsibility chains and the number of nodes in a single chain are relatively limited, but there are quite a lot of types. For example, a module that supports AT instructions may support dozens of AT instructions, but only 3-5 instructions may be used when performing a configuration operation. If all nodes are statically defined, it will consume a lot of memory resources. Therefore, dynamic allocation is necessary.

Define and initialize the responsibility chain

Define the run function and call it in the main loop.

The test node adds and starts the trigger function

It greatly simplifies the implementation of the application. Users only need to implement the response processing function and call the interface to add, which can be executed according to the time requirements