When it comes to data mining machine learning, the myth about beer diapers has long been heard in my impression. This problem often appears in articles related to data warehouses, which shows how far and deep the beer diaper problem has impacted the field of data mining.Look first at the cause: The story of beer and diapers originated in Wal-Mart supermarkets in the United States in the 1990s. Wal-Mart supermarket managers analyzed sales data and found an incomprehensible phenomenon: in some specific cases, beer and diaper were two seemingly unrelated goods.This unique sales phenomenon, often found in the same shopping basket, attracts the attention of managers who, according to follow-up surveys, find it in young fathers who often take a bottle of beer home with them while buying diapers.
While enjoying this issue, not everyone will be concerned about its implementation details.The beer diaper problem belongs to association analysis, where hidden relationships between items are found from a set of data sets and is a typical unsupervised learning.The itemset of association rules can be isomorphic such as beer->diaper or isomeric such as summer->air conditioning stock.

Below are descriptions of the Apriori algorithm that are collected by individuals to aid in memory. If misleading, please correct.

Frequent itemsets are those that meet the minimum support criteria, and all subsets of them must be frequent, understood as a group of goods that often appear together in the same basket.

Support formula: support = P(A and B), since the total number of training set transactions is relatively fixed, it can be simplified to the frequency of A and B (denominator same can be ignored).

The two K itemsets (frequent sets) need to be joined to generate a super itemset (candidate set) if both have the same K-1 item or if K is the initial frequent set.

Association rules are represented as A->B, where A and B are subsets of I, and the intersection of A and B is empty. Rule correlation is unidirectional, so it can be interpreted as a cause-and-effect relationship.

The association rule deduced from the calculated set of K terms should satisfy the confidence level condition and be interpreted as larger than the set probability value.

From the description above, we can see that the concept of candidate set, frequent set and subset appears many times in this algorithm. How to construct and manipulate the set is the key of Apriori algorithm, and the language that is best at set operation is SQL.Also based on this series, Thinking in SQL, see how to use SQL to reproduce the classic beer diaper sales myth.

Unlike the exhaustion method, according to the nature of frequent sets, the Aprior algorithm uses a layer-by-layer search method, which consists of the following five steps:

1. First, the candidate set (K-1) is initialized according to set D, and then the K-1 frequent set is obtained according to the minimum support condition.

4. Recursive step 2, 3, the algorithm terminates with the following condition: if the frequency set from the connection is no longer frequent, take the last frequent set as the result.

Now that I have a better understanding of this algorithm, I need to start to implement it, and give a brief explanation of my ideas:

4. Create a function that builds a very large frequent set (recursively generates a frequent set, and pruning depends on the support function of step 3)

5. The principal queries the SQL, uses the functions created in step 4 to build association rules, and prunes the output based on the minimum confidence level

The steps are as follows (personal environment ORACLE XE 11.2): 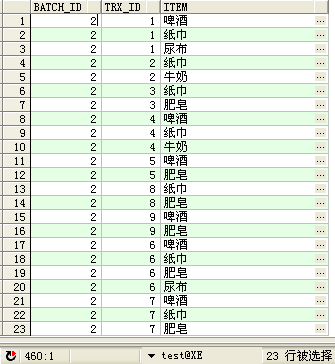 2. Create collection types so that SQL can interact with PLSQL.Each itemset may have a different number of items belonging to an itemset ID.

4. Create a recursive function to construct a superset of K-item frequent sets, recursively construct a very frequent set of items according to the specified parameters, and here you can specify the maximum K value of P_MAXLVL to limit the recursive level (default is unlimited). Focus on the SQL implementation of frequent set connections to construct candidate supersets, which is the core part of the algorithm.G in SQL, block ROW BY ROW loop processing ideas, note that you might get lost if you don't have collection-oriented thinking.

Once the function is created, you can make a few simple queries to help understand:

A. When you query the results of a calculation of a very large and frequent itemset, you can see that there are two or three itemsets of the result 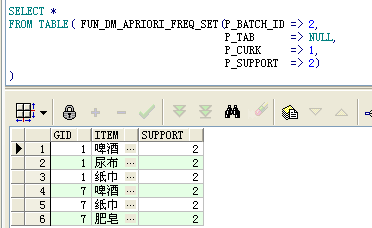 b. Query the initial itemset, specifying a maximum search level of 1, resulting in 6 1 itemsets 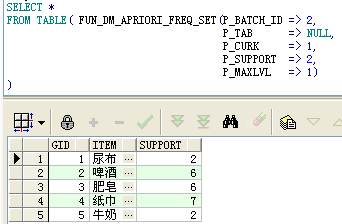 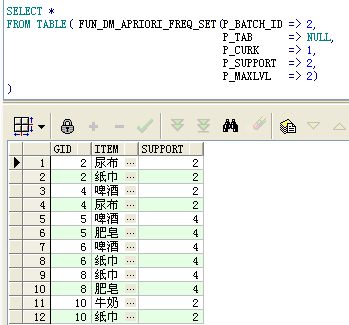 d. Query the support level corresponding to the two frequent itemsets, note the use of CAST and MULTISET, do not explain 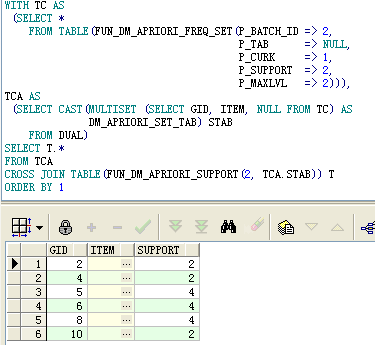 5. The main body queries the SQL, uses the functions created in steps 3 and 4 to build association rules, prunes the output results according to the minimum confidence level, and uses the parameter set PARAMS (support level 2, confidence level 60%) to drive the whole disk, Thinking in SQL, all at once, as follows:

After execution, look at the results of machine learning, the story turned into something like beer diapers and paper towels, and then look at the 0.25 seconds (11 years of PC service):

Classic algorithms like beer diapers allow us to expand our thinking, not just in the vertical direction (specializing in technology, limited self-esteem), otherwise we will fall into the trap of "too academic".Instead of focusing solely on basket analysis, brainstorming your lateral thinking extensions can reveal many scenarios.For example, as a DBA developer, you often analyze questions such as which tables are frequently queried simultaneously by associations, which columns appear in predicates at the same time, and how to create composite indexes, redundant acceleration columns, and redundant acceleration tables can have a strategic impact on overall system performance.The training set can be formed by mining and analyzing the SQL of production library regularly. The related itemsets between tables, the related itemsets of predicate columns and the related rules can be found by manipulating the frequent set. The support weight can also be given by combining Euler's theorem.This will provide effective decision-making basis for efficient database design and operation.Of course, real-world development can't make people think too much about strategic technical elements, and performance requirements are just a temporary pleasure.So while many of the ideas that you've worked for N years are only partially grounded.Agile + result-oriented will inevitably lead to guerrilla warfare mentality (rules of association derived personally) that many people will agree with.