(2) The binary search method is only suitable for searching from an ordered sequence of numbers (such as numbers and letters), sorting the sequence and then searching

Requirements: the array {1,3,8,10,11,67100} is programmed to realize binary search, which is required to be completed by non recursive method

Introduction to divide and conquer algorithm

(2) Divide and conquer algorithm can solve some classical problems

Divide and conquer has three steps on each layer of recursion:

(2) Solution: if the subproblem is small and easy to be solved, solve it directly, otherwise solve each subproblem recursively

The divide and conquer algorithm design mode is as follows:

>Legend of the tower of Hanoi
Hanoi Tower: the problem of Hanoi Tower (also known as Hanoi Tower) is an educational toy derived from an ancient Indian legend. When Brahma created the world, he made three diamond pillars. On one pillar, 64 gold discs were stacked in order of size from bottom to top. Brahma ordered Brahman to rearrange the disk on another column in order of size from below. It is also stipulated that the disc cannot be enlarged on the small disc, and only one disc can be moved between the three columns at a time.
If every second, how long does it take? It takes more than 584.554 billion years to remove these gold pieces, and the life expectancy of the solar system is said to be tens of billions of years. After 584.554 billion years, all life on earth, including Vatican pagodas and temples, has long been extinguished.

Backpack problem. There is a backpack with a capacity of 4 pounds. There are the following items

(2) The items required to be loaded cannot be repeated

Train of thought analysis and illustration

(3) Knapsack problem only refers to a given capacity knapsack, several items with certain value and weight, how to select items to put into the knapsack, and how to use the items with the greatest value It is divided into 01 backpack and complete backpack (complete backpack means that there are unlimited items available for each item)

(4) The problem here belongs to 01 knapsack, that is, each item can be placed at most, and infinite knapsack can be transformed into 01 knapsack

(5) The main idea of the algorithm is solved by dynamic programming. The ith item traversed each time is calculated according to w[i] and v[i]
Determine whether the item needs to be put into the backpack. That is, for a given n items, let v [], w[i] be the value and weight of the ith item respectively, and c be the capacity of the backpack. Let v[i][i] represent the maximum value that can be loaded into the backpack with capacity j in the first I items. Then we have the following results:

If we use the idea of violent matching and assume that str1 is now matched to position i and substring str2 is matched to position j, there are:+
(1) If the current character matches successfully (i.e. str1[i]== str2[li]), I + +, j + +, and continue to match the next character
(2) If mismatch (i.e. str1[i]! = str2[li]), let i=i-(j- 1), j=0. It is equivalent to I backtracking and J being set to 0 every time a match fails.
(3) If violence is used to solve the problem, there will be a lot of backtracking. Only move one bit at a time. If it doesn't match, move to the next bit and judge. It wastes a lot of time. (not feasible!)
(4) Violent matching algorithm implementation

(1) KMP is a classical algorithm to solve whether the pattern string has appeared in the text string, and if so, the earliest position
(2) Knuth Morris Pratt string search algorithm, referred to as "KMP algorithm" for short, is often used to find the occurrence position of a pattern string P in a text string S. This algorithm was jointly published by dopad Knuth, Vaughan Pratt and James H. Morris in 1977, so the algorithm was named after the surnames of these three people
(3) The KMP algorithm uses the previously judged information to save the length of the longest common subsequence in the pattern string through a next array. During each backtracking, the previous matching position is found through the next array, saving a lot of calculation time
(4) References: https://www.cnblogs.com/ZuoAndFutureGirl/p/9028287.html

>String matching problem:
(1) There is a string STR1 = "BBC abcdab abcdabde", and a substring str2="ABCDABD"
(2) Now it is necessary to determine whether str1 contains str2. If it exists, it returns the position where it first appears. If not, it returns - 1
(3) Requirements: KMP algorithm is used to complete judgment, and simple violent matching algorithm cannot be used

Train of thought analysis:
>Greedy algorithm with high efficiency:
At present, there is no algorithm that can quickly calculate the prepared value. Using greedy algorithm, we can get a very close solution with high efficiency. In terms of policy, the minimum set covering all regions is required:
(1) Traverse all radio stations and find a station that covers the most uncovered areas (this station may contain some covered areas, but it doesn't matter)
(2) Add the radio station to a collection (such as ArrayList) and try to remove the areas covered by the radio station in the next comparison.
(3) Repeat step 1 until all areas are covered 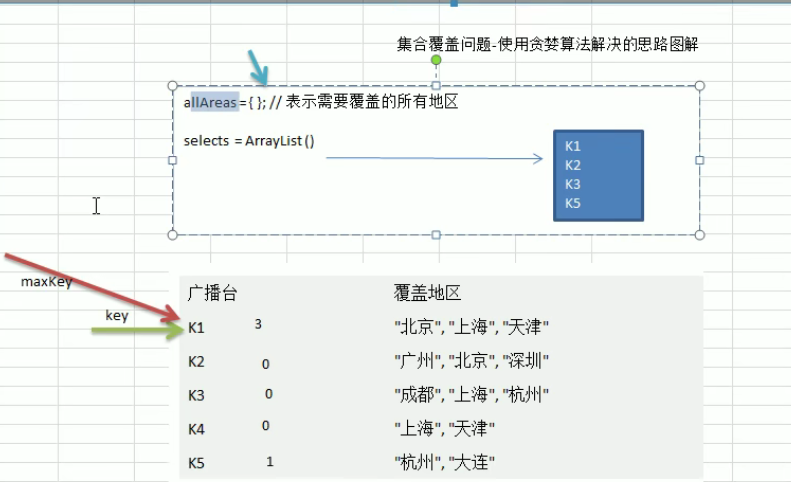 (1) The results obtained by greedy algorithm are not necessarily the optimal results (sometimes the optimal solution), but they are relatively approximate (close) to the optimal solution
(2) For example, the algorithm in the above question selects K1, K2, K3 and K5, which covers all regions
(3) However, we found that K2, K3, K4 and K5 can also cover all regions. If the use cost of K2 is lower than K1, then
Well, K1,K2,K3,K5 in our last question satisfy the condition, but they are not optimal