Literal quantity is data / value, for example: 1234, true, "abc", in ‟, 3.14. In real life, you will be exposed to data every day. For example, your weight today is 86Kg. You spent ， 500 yuan and bought a watermelon. The weight is ， 8.6Kg. It's sunny outside, but you say it's stormy and rainstorm. What you say is false. You clearly like her, but you say you don't like it and lie. Software is actually to solve the problems in real life. Solving the problems in life is actually to process the data in life. A programming language must be able to represent the data before it can process the data. Therefore, Java programs express the data by literal quantity. In programming languages, data is generally classified, so each data has a data type, and different data types will allocate different sizes of memory space to store it. Basic data types are divided into integer type, floating point type, character type, boolean type, string type, etc.

Constant: the amount whose value cannot be changed during program operation. Its classification is generally as follows

Variable overview: variable is the most basic unit for storing data in memory. Put the data (literal) into memory and give this memory space a name, which is variable. Therefore, a variable is a space in memory. This space has name, type and value, which are also the three elements that a variable must have. 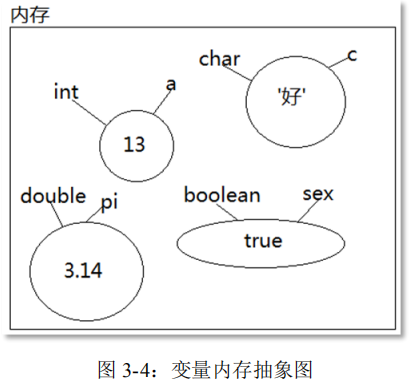 In the figure above, each abstract ellipse represents a variable, where ‟ a, c, pi and sex ‟ are the names of ‟ 4 variables (variable names can only be legal identifiers), 13, ‟ good ‟, 3.14 and true ‟ are the data (literal) stored in ‟ 4 variables respectively, int, char, double boolean ￠ is the data type corresponding to the four ￠ variables (int, char, double, boolean, etc. are all keywords of Java ￠ and are used to specify the data type of the variable when declaring the variable). Data type is very important in any programming language, because the program will allocate different sizes of space to data through different data types. Some data types take up less space, but some data types take up a lot of space. This is also in line with reality. In real life, some data are larger and some data are smaller. The variable requires that the "data type of the variable" and the "data (literal quantity)" stored in the variable must be the same type. In other words, the refrigerator is used to store small food, that is, the refrigerator can only store small food, and the elephant can't put it in the refrigerator. The reason is that it can't be put, and the space is inappropriate. For example, int ， type can only store integers of ， 4 ， bytes in size, which can't be longer. For example, integers of long ， type occupy ， 8 ， bytes. Such data can't be put into variables of ， int ， type. Variable: variable quantity. It means that the data stored in the variable is not invariable, but can be changed. Assuming that the data previously stored in the variable i ＾ is ＾ 10, we can change ＾ 10 ＾ into ＾ 100. That's what the variable means. You need to know that a variable is composed of three elements: data type, variable name and stored value. The stored value is the literal value of. Java requires that a variable can only save one data at a time, and the data type to be saved must be specified. When a variable name is output in a java program, the value saved in the variable will be automatically output.

The above is the syntax format of declaring variables, in which the data type will be explained in detail later. At present, we take the data type "int" as an example to learn, and int ， represents the integer type. As long as the variable name complies with the identifier naming rules, of course, see the meaning of the name. The naming specification also requires that the first letter of the variable name is lowercase and the first letter of each word after it is uppercase. See the following code to declare a variable age of type int # to store age data:

java is a strongly typed language. To declare variables, you must specify the data type. The declaration of a variable is just a declaration and will not open up space in memory. When assigning a value to a variable name, a space will be opened up in memory, where the value assigned to the variable name will be saved. We can also assign values to variables while declaring them. The format is as follows:

There is a very important principle in java: the proximity principle. (not only in java, but also in other programming languages.) Visit whichever is close to me.

Variables can be divided into: 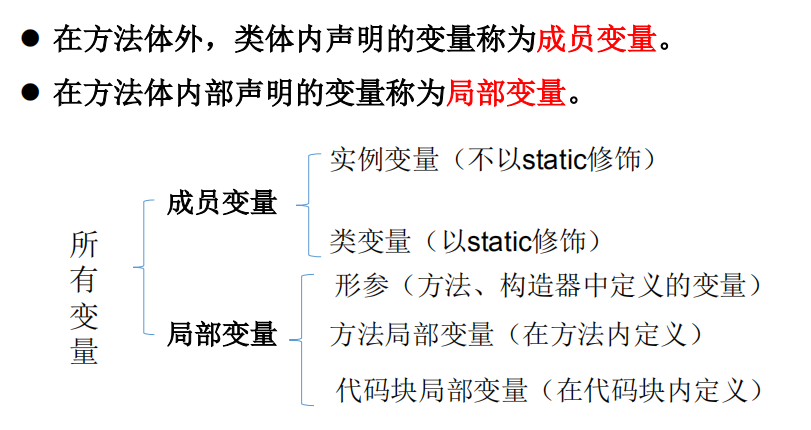 Define variables of all basic data types. The codes are as follows

Java language is a strongly typed language. It gives clear data types for each kind of data. Different data types have different space allocated in memory. Therefore, the data size they represent is also different. 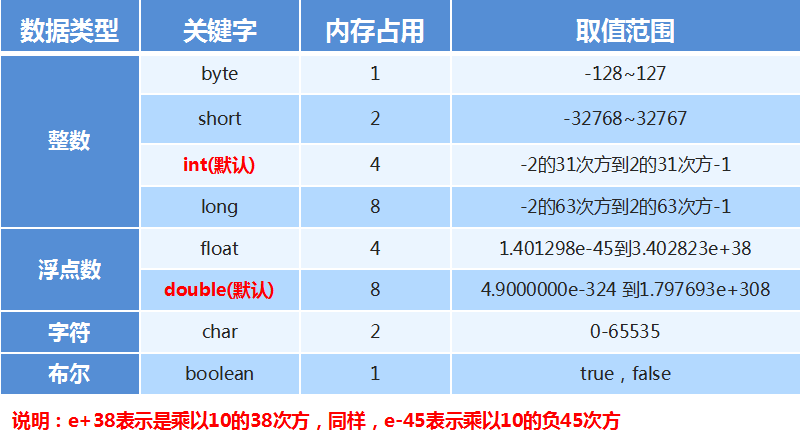 The other is the reference data type, which is divided into class, interface and array. We will learn it later. Let's learn the basic data types in detail

Float: single precision, mantissa can be accurate to 7 significant digits. In many cases, the accuracy is difficult to meet the requirements. Double: double precision. The precision is twice that of float. This type is usually used. However, for the financial system, when it comes to money, the accuracy of double is far from enough. Later, the BigDecimal class in the java basic library can be used to represent ultra-high-precision data. It is more suitable for the development of financial system. However, BigDecimal does not belong to the category of basic data types. The floating-point constant of Java # is double by default. When declaring a floating-point constant, it must be followed by 'f' or 'f'.

There are three forms of character variables:

For the above eight basic data types, seven types of byte, short, int, long, float, double and Boolean are easy to represent by computer, because the bottom layer of these seven types is directly numbers, and there are fixed conversion rules between decimal numbers and binary, so the computer can represent and process them directly. But don't forget that in addition to the above seven data types, there is another type called character char, which is not so easy for computers to express, because characters are words in the real world after all, and words are different in each country. How do computers express words? We need computers to support characters in the real world. Some standard setting associations have formulated character codes (character sets). Character codes are actually a comparison table, which describes the corresponding relationship between a character and binary.

In the 1960s, the United States formulated a set of character codes, which made unified provisions on the relationship between English characters and binary bits. This is called ASCII code. ASCII code specifies a total of 128 characters. For example, the SPACE "SPACE" is 32 (binary 00100000), and the uppercase letter A is 65 (binary 01000001). These 128 symbols (including 32 control symbols that cannot be printed) only occupy the last 7 bits of a byte, and the first 1 bit is uniformly specified as 0.

Existence and causes of garbled code

There are fixed conversion rules between basic data types. Now we summarize the following six rules. No matter which program, apply these six} rules to solve the problem: