Deep understanding of C# covariance and inversion
msdn is explained as follows:

"Covariant" refers to the ability to use a type that is more derived than the originally specified derived type.

"Inversion" means that less derived types can be used.

The explanation is very correct. It's roughly like this, but it's not straightforward enough.

The above is my personal understanding of covariance and inversion. I think it's easier to remember words such as derivation, type, original assignment, larger and smaller.

Here is a joke:

Every day of the week should read as follows:

To demonstrate covariance and inversion and the difference between them, please create a console program CAStudy and manually add two classes:

Because it is a demonstration, it is an empty class,

Therefore, if Dog becomes Animal, it is a harmonious change (covariance), and if Animal becomes Dog, it is an abnormal change (inversion)

In the Main function, enter:

Because Dog inherits from Animal, Animal aAnimal = aDog; aDog will be implicitly transformed into Animal

If you want to convert, you should use the following code:

You can see how complex it is to turn an lstDogs into lstAnimal.

Because of this, Microsoft has added two keywords: out and in. Here is their msdn explanation:

Why did Microsoft choose "Out" and "In" as features instead of them? 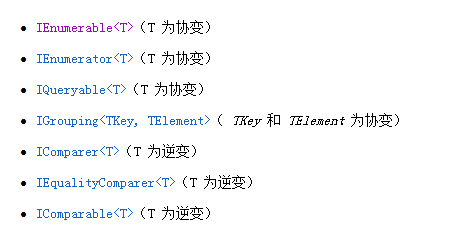 First look at the first IEnumerable

As mentioned at the beginning, T is marked with out, so T represents output, that is, it can only be returned as a result.

Because T can only return results, T will not be modified. The compiler can infer that the following statement is legal, so

You can check the compiler and decompile the code as follows:

Although I passed the C# comp il er check, I didn't know about covariance and inversion, so I had to cast obediently.

Here I see this sentence:

To answer this question, you need to look back at the chapter of Clr via C# on generics and interfaces. I won't explain it,

The answer is No.

In order to demonstrate inversion, you need to find an in marked interface or delegate. The simplest is:

Add to the Main function:

Obviously, actionAnimal makes animals call, because Dog is Animal, so since all animals can call, Dog must also call.

Demonstrate the Out keyword again:

Because of the out keyword, the following code can be compiled

Modify the above two classes to:

Because T is modified by out, T can only be used as a parameter.

Use the in keyword this time.

Because it is marked with the in keyword, T can only be used and cannot be used as a return value.

The last modified code is:

The compilation was successful because in represents the inversion, so