stay WebRTC In the video processing pipeline of, the receiver buffer JitterBuffer is a key component: it is responsible for the out of order rearrangement and framing of RTP packets, RTP packet loss retransmission, requesting retransmission of key frames, estimating buffer delay and other functions. The buffer delay JitterDelay has an important impact on the one-way delay of video stream, which largely determines the real-time performance of the application. This paper does not intend to comprehensively analyze the implementation details of the receiver buffer, but only the calculation of buffer delay JitterDelay</ br>

The buffer delay consists of two parts: the delay caused by bit rate burst caused by transmitting large-size video frames and the delay caused by network noise. WebRTC uses Kalman Filter to estimate the network transmission rate and network queuing delay, and then determines the buffer delay. Based on the theoretical study of Kalman Filter, combined with WebRTC source code, this paper deeply analyzes the calculation and update process of buffer delay in detail</ br>

</br>
This section mainly refers to references [1] [2] [3], which is used as an introductory material to learn the basic principle of Kalman filter. In short, Kalman filter is an optimized autoregressive data processing algorithm. Literature [2] summarizes the basic idea of Kalman filter:</br>

"Essentially, filtering is a signal processing and transformation (removing or weakening unwanted components and enhancing required components) The process of. Kalman filter belongs to a software filtering method. Its basic idea is to take the minimum mean square error as the best estimation criterion, adopt the state space model of signal and noise, update the estimation of state variables by using the estimated value of the previous time and the observed value of the current time, and obtain the estimated value of the current time. The algorithm estimates the signal to be processed to meet the minimum mean square error according to the established system equation and observation equation. "</ br>

Plus the measured value of the system:</br>

In the above two equations, X(k) is the system state at time k, and U(k) is the control quantity of the system at time K.
A and B are system parameters. For multi model systems, they are matrices.
Z(k) is the measured value at time k, H is the parameter of the measurement system, and for multi measurement system, H is the matrix.
W(k) and V(k) represent process noise and measurement noise respectively They are assumed to be Gaussian white noise, and their covariances are Q and R, respectively</ br>

In equation (2.2.1), X(k|k-1) is the result predicted by the previous state, X(k-1|k-1) is the optimal result of the previous state, and U(k) is the control quantity of the current state.
So far, our system results have been updated. However, the error covariance corresponding to X(k|k-1) has not been updated. We use P to represent the error covariance:</br>

Where Kg is Kalman gain:</br>

So far, we have obtained the optimal estimate X(k|k) in K state. However, in order to keep the Kalman filter running until the end of the system process, we also need to update the error covariance of X(k|k) in K state:</br>
notes: covariance, see: Mr. Ma explained how to explain the concepts of "covariance" and "correlation coefficient" in a straightforward way- Know

Where I is the identity matrix. When the system enters the k+1 state, P(k|k) is P(k-1|k-1) of equation (2). In this way, the algorithm can continue the autoregressive operation</ br>

3 calculation process of JitterDelay in webrtc

</br>
Before the decoding thread obtains a frame of video data from the buffer for decoding, it will update the local state of the buffer according to the size, timestamp and current local time of the current frame, including the maximum frame size, average frame size, average noise value, channel transmission rate, network queuing delay and other parameters. The update process is shown in Figure 1:</br> 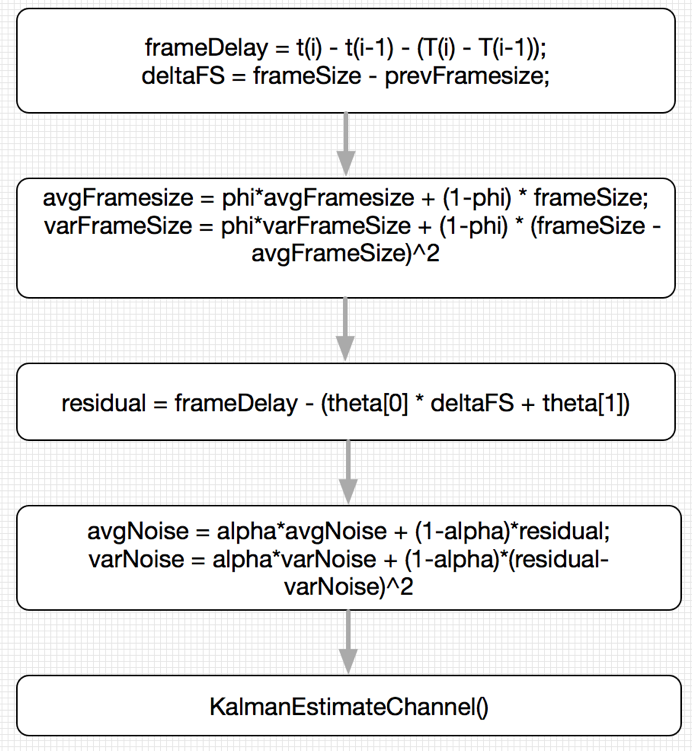 Then calculate the average and variance of the frame size:</br>

Next, the delay residual (reflecting the size of network noise) is calculated, and the noise mean and variance are calculated accordingly:</br>

Finally, the Kalman filter dynamically adjusts the channel transmission rate theta[0] and network queuing delay theta[1] according to the current inter frame delay and inter frame size difference. The specific process is discussed in detail in the next section</ br>

The meaning of the above formula is to estimate the time consumption at this time with the estimated value of the previous time:</br>

The above formula represents the state iteration relationship between time i and time i-1: the state at time i-1 plus the product of the residual z(i) at time i and the Kalman filter at time i, where the kalman gain at time i is calculated as follows:</br>

Where I is the 2 * 2 unit matrix and E(i) is the error covariance (which is the key parameter of Kalman filter iteration).
var_noise is noise variance, var_v_hat is the filtered average value of noise standard deviation index, which is the measured noise covariance R of frame i,
It has a great influence on the final calculated Kalman gain: var_ v_ When hat (I) is large, the Kalman gain is small, which means that the noise in this measurement is large, and the final estimated value is closer to the last estimated value and less affected by this residual error

The following pseudo code is a concise summary of vcmjitterestimator:: Kalman estimatechannel function in WebRTC, and describes the code implementation of Kalman filter</ br>

So far, one iteration of Kalman filter to estimate channel transmission rate and network queuing delay is completed</ br>

Based on the theoretical study of the basic principle of Kalman filter, combined with WebRTC source code, this paper deeply analyzes the calculation method and update process of buffer delay at WebRTC video receiver. Through this article, further deepen the learning and understanding of WebRTC.