Design and implementation of port scanning tool based on C language

The scanning host attempts (using three handshakes) to establish a formal connection with a port of the target host. The connection starts with the system call connect(). If the port is open, the connection will be established successfully. Otherwise, return - 1, indicating that the port is closed. The flow chart of full scanning is as follows:

[the external link image transfer fails. The source station may have an anti-theft chain mechanism. It is recommended to save the image and upload it directly (img-BMZ32BlH-1645250441735)(img/007S8ZIlgy1geb1onsvvuj30np0ra74n.jpg)]

In this technology, the scanning host sends SYN data segment to the selected port of the target host:

Since the full connection has not been established during SYN scanning, this technology is usually called "half connection" scanning, which has the following advantages and disadvantages:

TCP FIN scanning is also called secret scanning. Its advantages and disadvantages are as follows:

When scanning a UDP port, send a UDP message to a port. If the port is open, there is no response. If it is closed, the other party will recover an ICMP port unreachable message.

The discrimination methods of the above four scanning modes are summarized as follows:

We use C and Go languages to implement the port scanning tool, which is completed by two team members respectively. Each language implements four scanning modes: TCP connect, SYN, FIN and UDP.

In order to improve the scanning speed, we use the features of two languages:

We adopt Go's Ctrip + producer consumer model, which allows multiple producers to send messages and multiple consumers to monitor the return at the same time. If the corresponding return is received, it indicates that the port is open. On the one hand, such a model can realize parallelism to speed up the scanning speed. On the other hand, using asynchronous model can effectively reduce the waiting time for Socket IO.

We use multithreading. Multithreading to achieve parallelism, so as to speed up the scanning speed. When multiple socket IOS are polled and one of them responds, it indicates that the scanning message of the port has been returned, which can effectively reduce the waiting time of socket io.

As mentioned above, the producer function is the producer and the consumer function is the consumer. Jobs is a channel, which is a channel used for inter process communication in go language. The realization of the whole producer consumer model is mainly realized through go collaborative process, and concurrent scanning is also carried out through multiple go Ctrip. By inputting the task structure of scanJob into jobs, consumers can scan the production tasks. A consumer is a consumer who takes out a job from the jobs channel and scans the response according to the scanway. j. Stop is a stop flag. When j.Stop is received in the channel, it will send a true to enter stopchannel to stop scanning.

go producer generates a producer collaboration generation task, and then polls the results channel to obtain the results.

The implementation of TCP scanning is the simplest. You only need to call the Dial function to establish a socket connection in the TCP layer and shake hands three times. Success means that the port is open. In order to speed up, the timeout of handshake is set here.

It can be seen that synscan constructs tcp packets directly and works in the ip layer. The essence of syn scanning is the syn package constructed by hand, so here we focus on the makePkg function.

[the external chain image transfer fails. The source station may have an anti-theft chain mechanism. It is recommended to save the image and upload it directly (img-sN6o7O7Q-1645250441738)(img/007S8ZIlgy1geafta994hj30ru0igabc.jpg)]

TCPHeader starts with the source port and destination port, followed by the serial number, and flags are the values after each flag position 01. It can be seen here that the difference between FIN and SYN scanning is the last two digits, one is 10 and the other is 01. 10 represents SYN set to 1, 01 represents FIN position 1, representing SYN packet and FIN packet respectively.

Next, after calculating the checksum of the whole header, set the checksum into the tcp packet, and then convert it into a byte stream.

SYN and FIN scans determine whether the port is open by returning packets. Therefore, how to accept returned packets is also the top priority here.

The core code is as above. recvSynAck listens on the ip layer. When the return packet is received, read the byte stream into the buffer slice through ReadFrom, and then judge the 13th byte. If it is 0x12, that is, 10010, it means that the syn and ack bits are 1, that is, the port is open. The implementation of recvRst is similar.

Since UDP ports are not common, and the current common UDP scanning method is relatively slow, here are some improvements to UDP scanning.
At present, the UDP ports open on the Internet mainly include 53, 123 and 161. Therefore, only customized data is made for common ports temporarily. When sending these data, if there is a return, it means that the port is open. 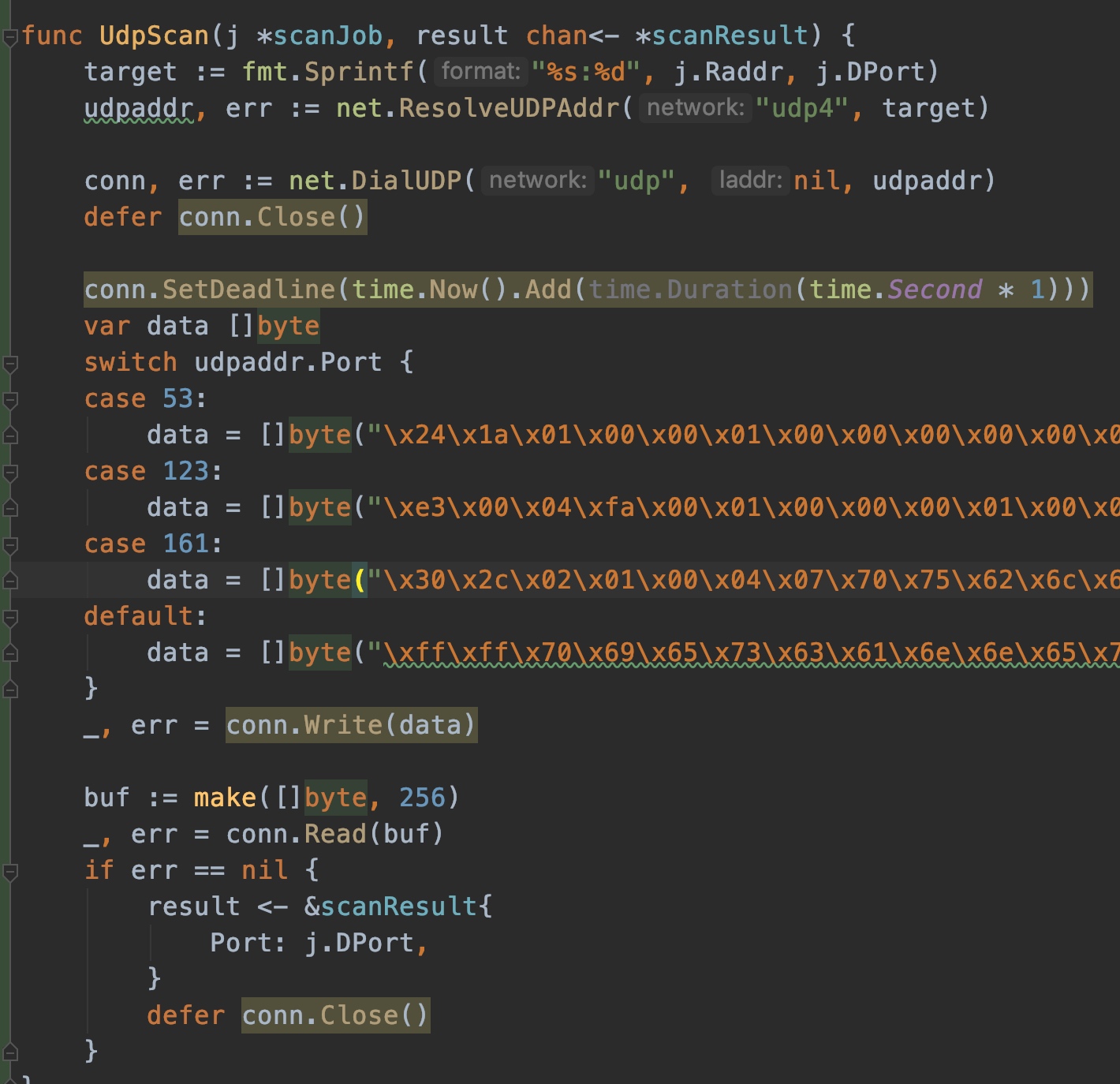 1.5 pits stepped in the process

Each scanning thread (tcpXXXScanPort) will establish a thread pool and create a thread tcpXXXScanEach for each port to be scanned (the thread is configured as the detach attribute). The specific implementation methods are somewhat different.

Since the calling thread can only pass one parameter, I put the information to be passed in a data structure and pass it to the child thread with a pointer. The following are the data structures you define to transfer:

At present, the most widely used port scanning tools are nmap and zmap. Nmap has powerful functions and accurate scanning results. The main advantage of zmap is its fast scanning speed, which is known as scanning the whole Internet in 44 minutes. However, zmap does not support multi port batch scanning. Therefore, we compared the two port scanners we wrote with nmap, a well-known product in the industry.

It can be seen that for SYN mode, the scanning result of go scanner is basically no different from that of nmap, and the speed is much faster. The main reason for the speed here should be that nmap confirms the service fingerprint, so the speed is a little slow.

There are many filter ports in nmap. The nmap document indicates that the filter port is actually not open, so here we can see that we are still faster and the result is correct. 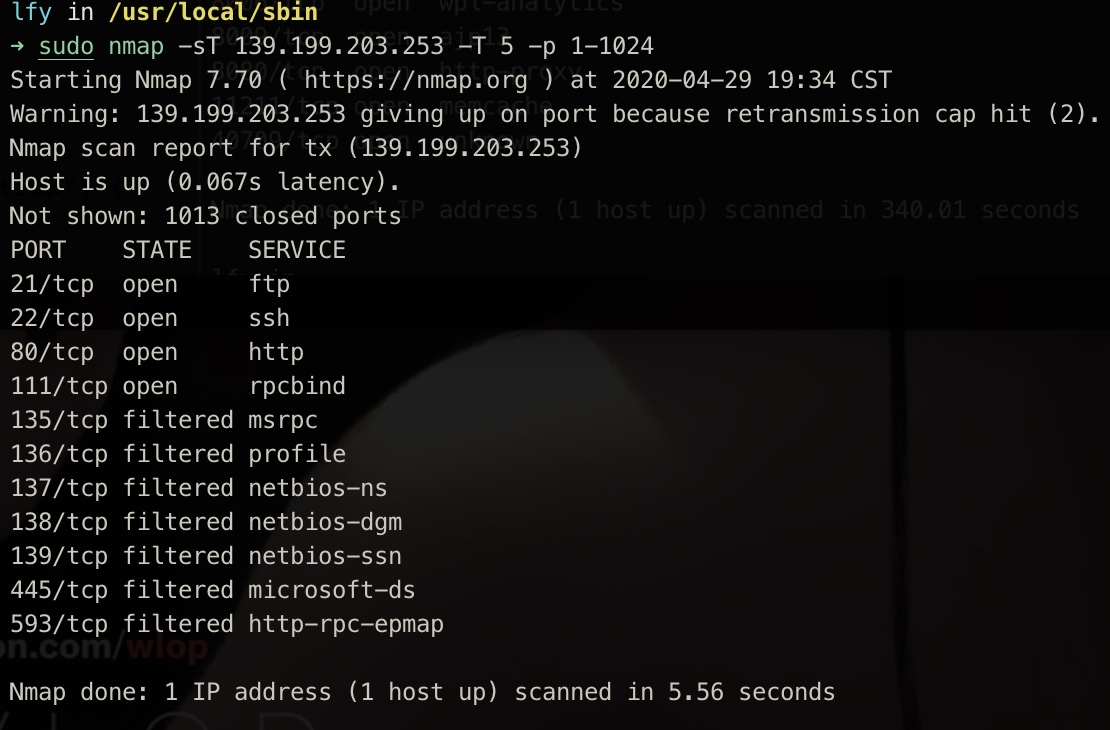 As you can see here, UDP scanning is extremely slow. For the accuracy of scanning, nmap is too slow to bear. Through our improvement, although it is a little troublesome, the speed has been improved a lot.

For the connect mode, the scanning speed is still relatively slow, but it is still much faster due to multithreading acceleration 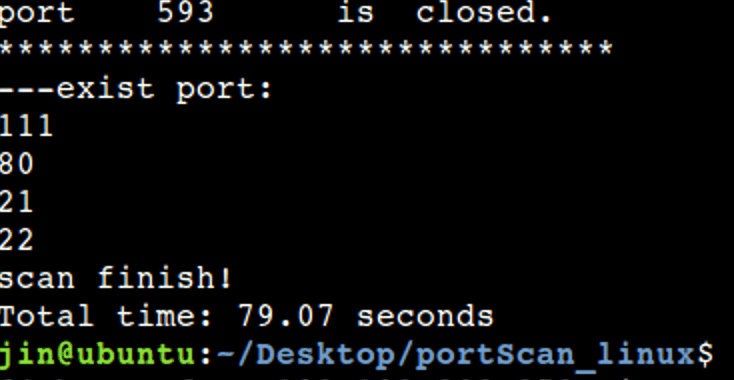 Compared with full scanning, the speed of half scanning is greatly accelerated, and the accuracy is also guaranteed

Theoretically, the speed of FIN scanning should be the fastest, but this is not the case here. It is because FIN scanning is unreliable. If no data packet is received, it is uncertain whether the packet is lost or the port is open. Therefore, it will send data packets to those unresponsive ports for confirmation many times to reduce the errors caused by packet loss, so the scanning takes a long time.

As you can see, UDP scanning is very, very slow 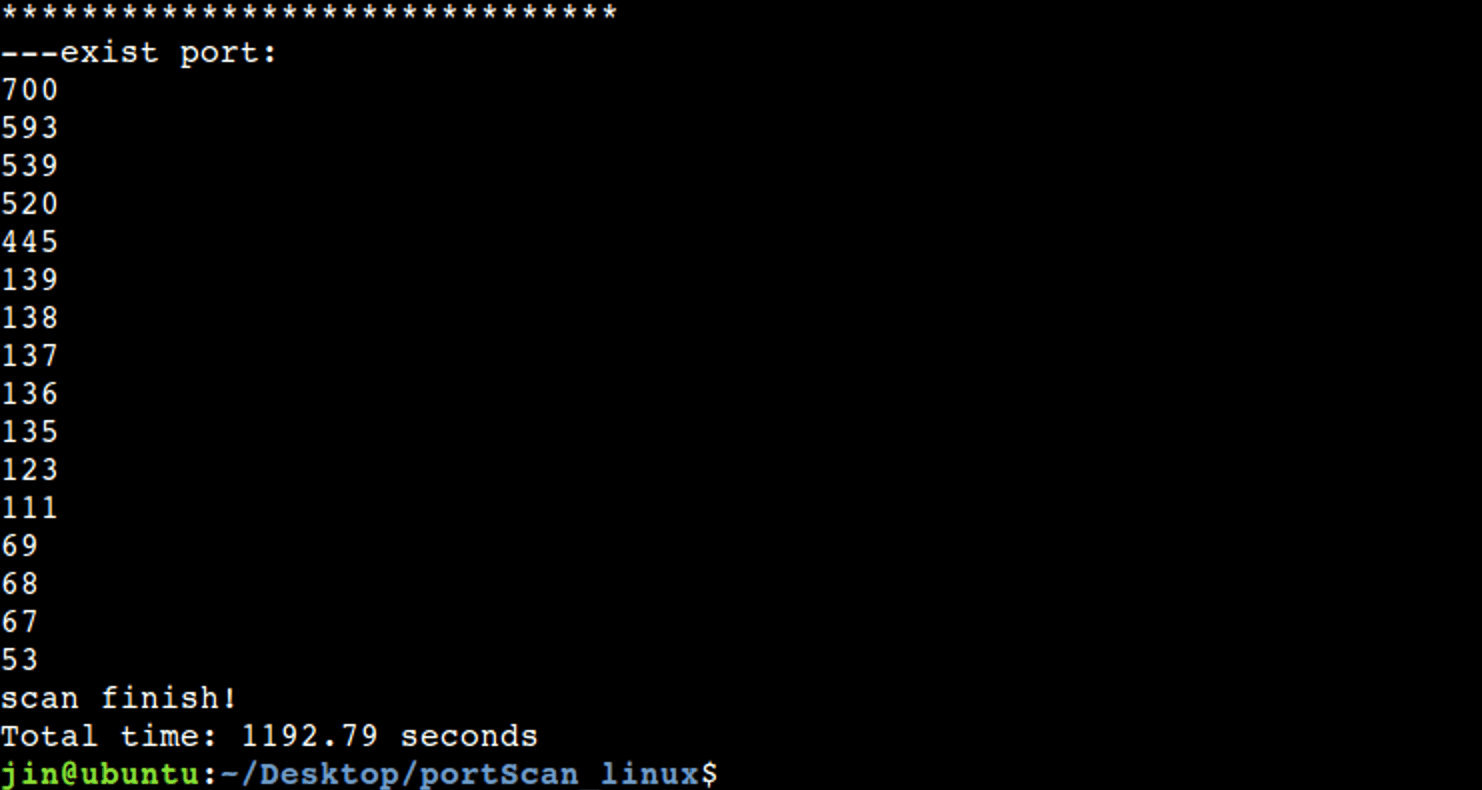 Through this experiment, we have deepened our understanding and application of computer network protocol, learned a lot of knowledge in this process and understood network programming. However, the accuracy and scanning speed of the program we completed are still much different from those of professional port scanning software. I hope we can improve it in future study.