Based on network sniffing, a simple network early warning system is designed and implemented to decode / decode and detect the characteristics of the captured packets.

The following functions are completed by interactive working mode under text interface or graphical interface: 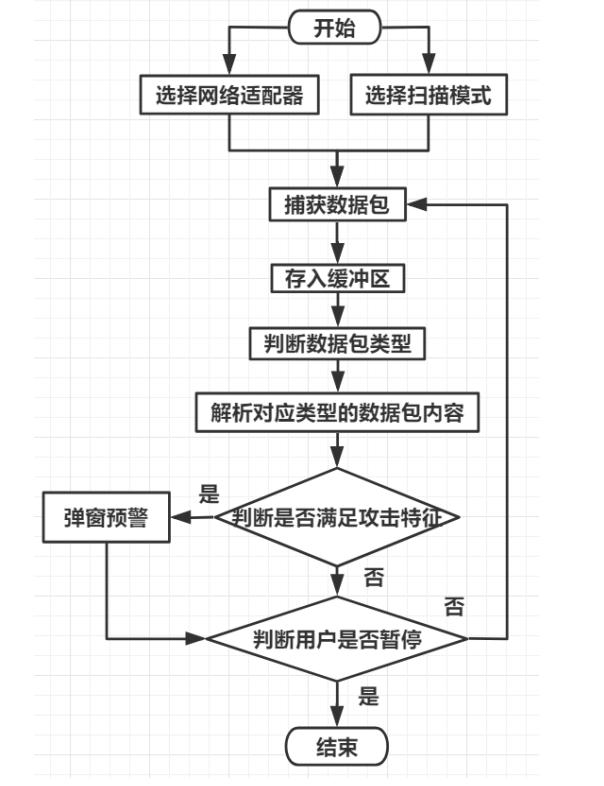 Using the captured transport layer data packet, analyze its corresponding port number. Then judge the protocol type according to the specific port number, and further analyze the field value through the protocol message format of each application layer. Through the encapsulated packet function interface of the library function, the packet content of different application layer protocol types can be analyzed.

Since Packet.Net and SharpPcap do not have HTTPS packet parsing, they can only design their own packet content parsing for TLS or SSL. The default HTTPS port number is 443. Through the analysis of the port, we can know whether the data packet is HTTPS, and the analysis of the data field format, we can analyze the information of HTTPS data packet, such as content type, protocol version, data length and so on

SYN Flood judges whether the Tcp protocol flag bit corresponding to the captured packet is syn and whether the destination address is the local IP, and then whether the proportion in the currently captured datagram buffer array reaches more than 70%.
Secondly, since the packet buffer is read every 50ms, there are certain requirements for the number of packets received within 50ms when measuring the attack in advance, that is, if there are few packets read within 50ms, they will not be identified as an attack.
The flow chart is designed as follows: 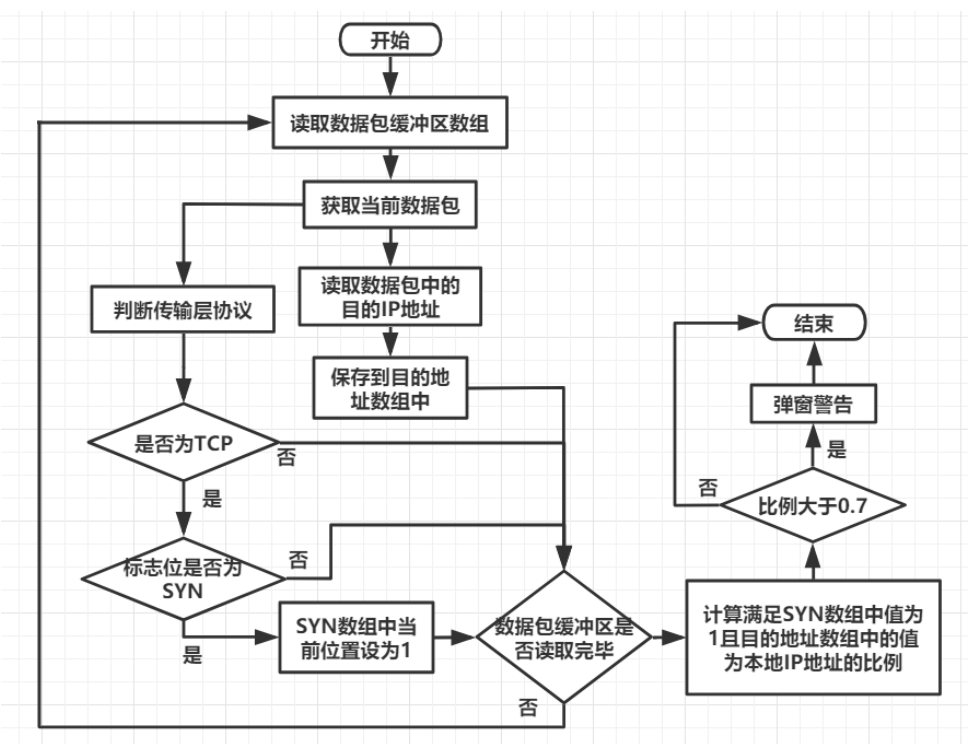 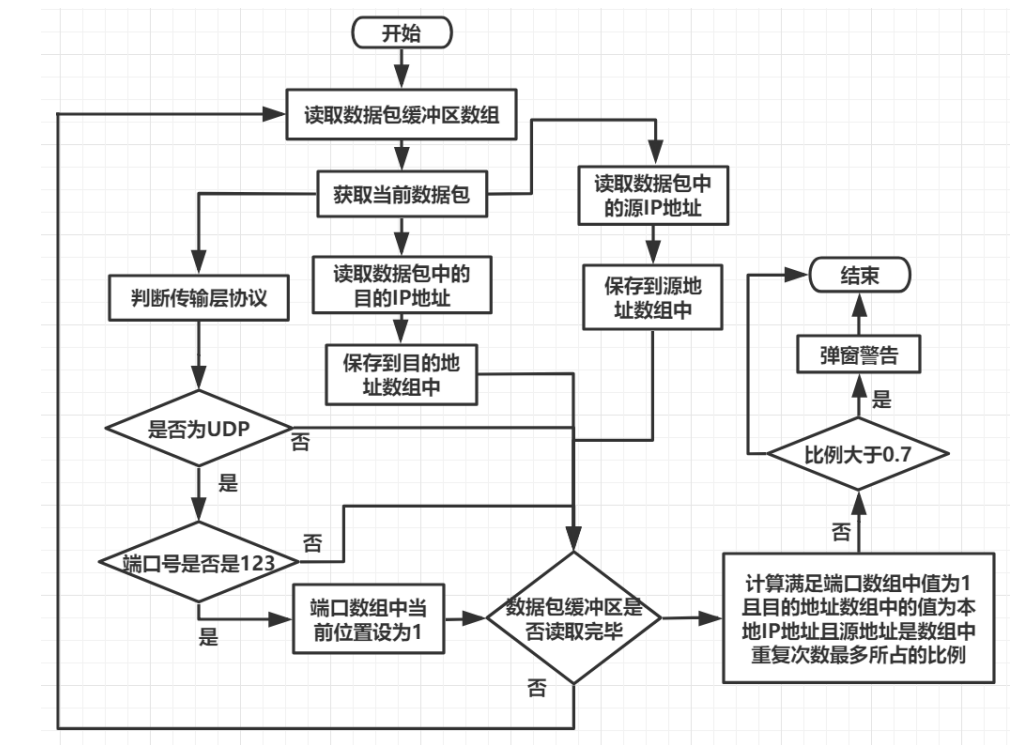 It is realized by calling the multithreaded delegate function of DataGridView window and design update and reading data packets in WinForm. DataGridView is a window control in WinForm that displays data in tabular form and provides a function interface for real-time display. Usually, this function is used in conjunction with threads. In this program, a packet array buffer is designed. The thread reading the data buffer is updated every 50ms. Each time it is read, the protocol content and number of each packet are counted from the current buffer, and the read statistical information is displayed in the DataGrid table in real time through the function interface Invoke provided in WinForm.

The SharpPcap Library of C# provides a CaptureDeviceList class, which is used to get local existing network adapters. After instantiating one of its objects, one of its Instance parameters can be invoked to the network adapter device.
Before capturing a data packet, you need to select the data acquisition mode. device provides Promiscuous and Normal modes. The former is a hybrid mode. It can accept all data streams passing through it. It will accept the data packet regardless of whether the destination address of the data stream is it or not, The latter general mode is to accept only packets whose destination address is it and not network packets with other addresses.
Define a buffer linked list with the type of packet RawPacket. When the listening event is enabled, the captured packets are stored in the packet buffer. Because the operation is asynchronous, when the current thread performs operations on the packet buffer, other threads cannot access it. Release the thread after updating the buffer array, and the update cycle is set to 50ms.
The Packet format stored in each buffer linked list is Packet. Call the Packet object as the parameter of the parsing function and create the object of each network layer protocol. For example, the object of the data link layer is Ethernet, the object of the network layer is Ipv4, and the object of the transport layer is UDP. If the new object of each level created according to the Packet object is not null, it indicates that the captured Packet is the protocol of the corresponding level. Each time the Packet buffer is updated, the link layer of each Packet in the buffer is parsed through the function interface of the link layer provided in the library function, and the source mac address and destination mac address are parsed. Secondly, the protocol, IP address and version information of the network layer are parsed according to the data Packet. Then analyze its transport layer information, including TCP or UDP and port information.
The node tree control is provided in the C#WinForm form form. The captured packet level information is displayed through the node number. Using this control, the effect similar to that of analyzing the content of each level of the packet in Wireshark software can be realized.

Distinguish the application layer protocol from the data packet of the transport layer. First judge the port of the transport layer, for example, the port number of HTTP is 80, the port number of SMTP is 25, and the port number of FTP is 21 or 20. After analyzing which application layer protocol it belongs to, it is parsed according to the byte array content of the captured packet. Through the function provided in the library function, the parameter is the corresponding byte array, and the return value is the node tree node. Finally, the resolved node object is added as a child node to the node parent class in the form for display.

Since the library function in this program does not provide HTTPS parsing function, I simply parse it according to the byte array of the packet. Analyze the value of the port number in the transport layer object of the packet. If it is 443, it is judged that it is HTTPS protocol. Analyze the corresponding content according to the field value at a specific position in the packet byte array. The first byte in the data carrier of HTTPS byte array represents the Content Type, which is the HandShake layer. 20 represents Change Cipher Spec, 21 represents Alert warning protocol, 22 represents HandShake handshake protocol, and 23 represents Application Data protocol. The second and third bytes in the data carrier represent the protocol version information. For example, the 0303 field represents the protocol version as TLSv1.20301 represents TLSv1.0, etc. The fourth byte and the fifth byte in the data carrier represent the length of the data segment. The contents of the following fields are detailed packaging information, including certificates and secret keys.

Define an int array whose length is the length of the current packet buffer and is used to store the number of TCP message contents in the current packet array marked syn. Then define a string array to store the destination address in the buffer packet. If the TCP flag bit in the packet buffer is syn and the proportion of the destination ip address to the local machine reaches more than 70%, it is judged that it is attacked and pop-up prompt is made by using the MessageBox space in WinForm.

Define a delegate function whose parameter type is packet, which is used to display it in DataGridView table in real time. When the thread that updates the packet buffer runs each time, it executes the predefined delegate function for display with the specified packet chain table by owning the basic window handle of the control, and generates the corresponding string according to the packet and index serial number to display in the window list. The DataGridView function of C# provides the interface of ADD function. The parameter of the function is used to display the data array of every row in the form. After parsing the packets, the information is packaged into an array and the ADD function of the DataGridView control is added to the new row.

Select the network adapter, where the wireless network is selected

The SharpPcap library provides functions for filtering rules. Filtering can be realized by entering rules

Click the start button to execute packet capture. The result is shown in the figure below, including information at all levels and packet content 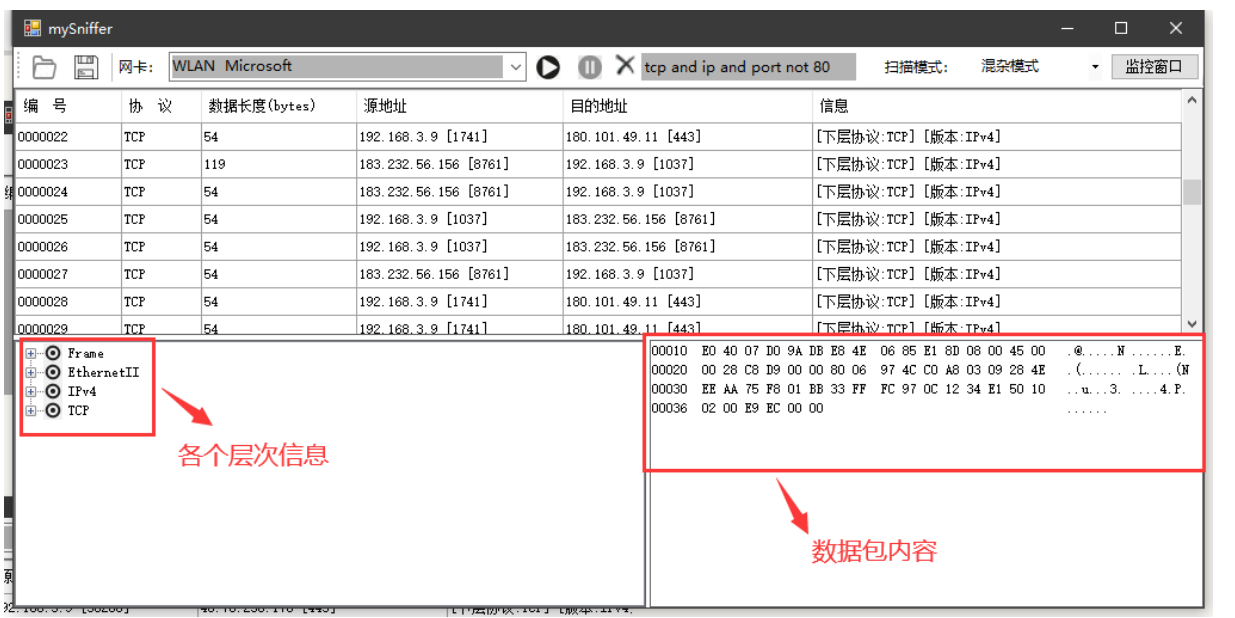 Detailed information of each level can be expanded in the node tree at the lower left corner: 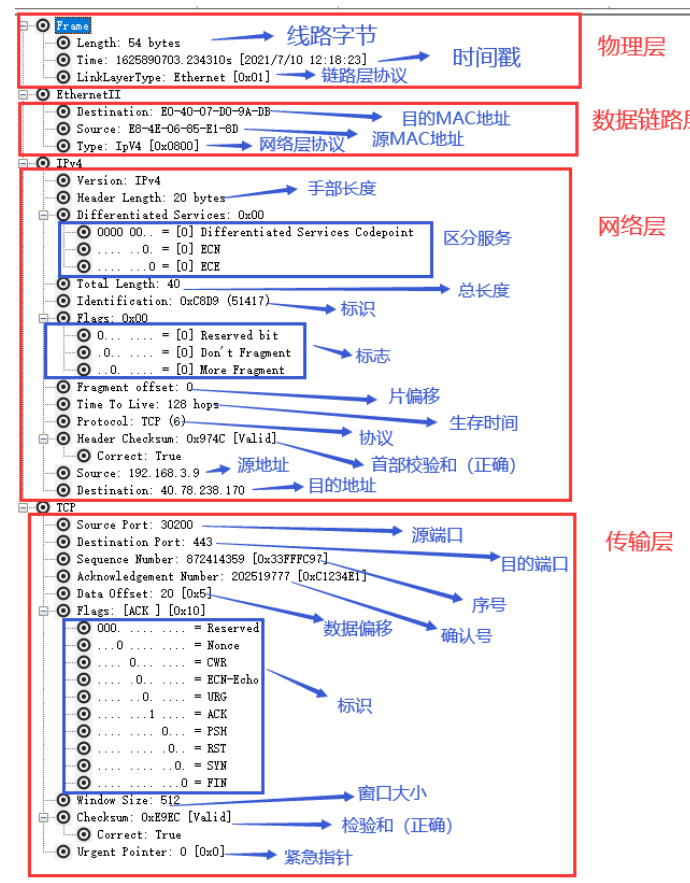 The contents of transport layer UDP are as follows:

The captured FTP packets are as follows

SMTP packets can be captured by entering telnet smtp.qq.com 25 in the CMD console. Because the port number of SMTP is 25, the content displayed after setting the filter rules in the filter is analyzed as follows: 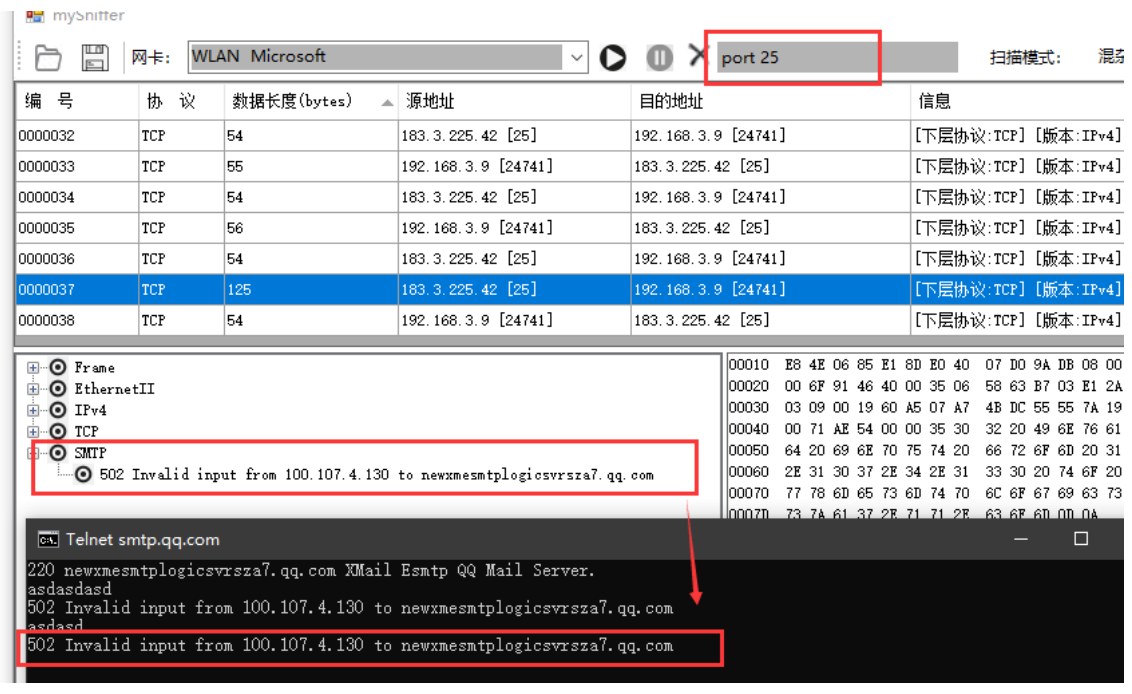 After normal access to the web page, you can capture the Http packet, and its parsing content is as follows 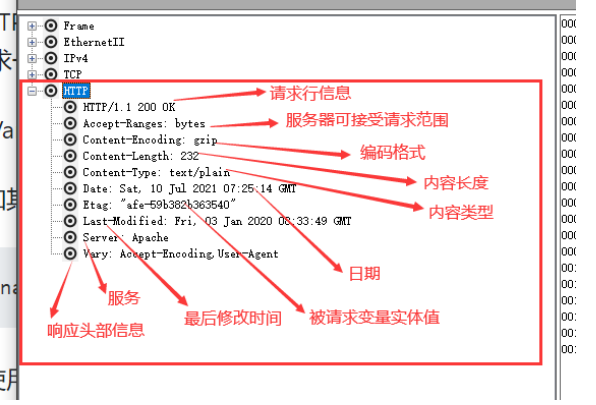 The data packets after SYN Flood attack and pop-up prompt can be captured in the program as follows:

The captured data packets and warning prompts are as follows: 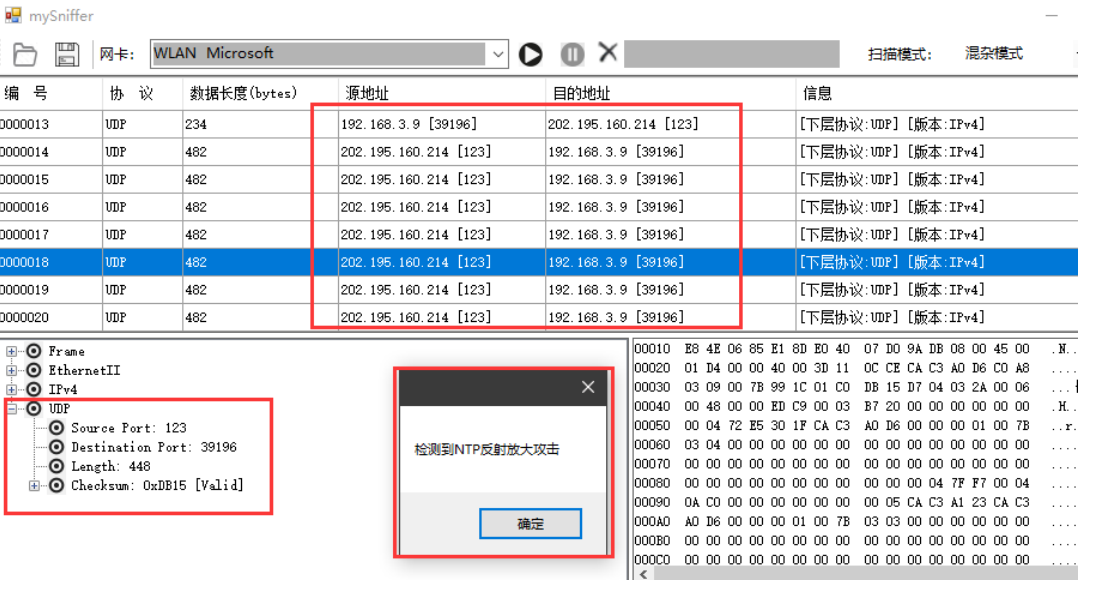 This program implements a monitoring window for real-time statistics of the corresponding number of packet protocol types, as follows: 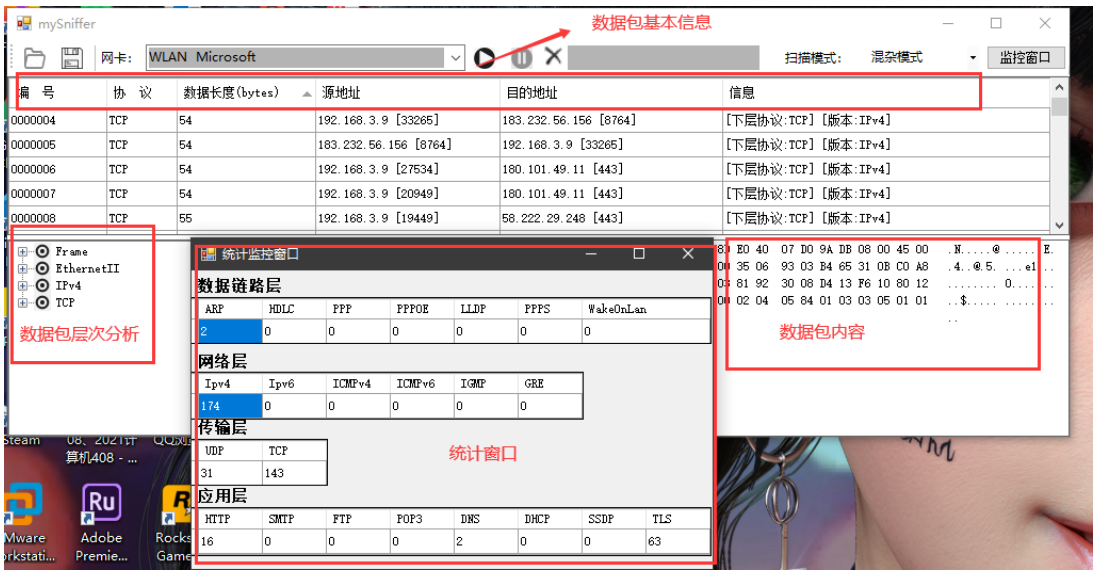 In this experiment, a major difficulty is that in order to realize the real-time display of captured data packets, it is necessary to use the relevant knowledge of multi-threaded calls and delegate functions. Because they are not very skilled in their operation in advance, they spend a lot of time in this place. Finally, they write it themselves after deeply understanding the relevant examples.
Secondly, there is an error in the understanding of the functions to be realized by SSL and TLS. In this experiment, TLS and SSL should analyze their signatures and encrypted contents, while I only realized the analysis of specific field values. In the aspect of early warning function, I did not consider the judgment of analyzing port, flag bit and other information in advance, but only considered the IP address and proportion. As a result, although the early warning system can detect the corresponding attack at the beginning, the false alarm rate is very high, which is reflected in that I will be prompted to receive the attack when I browse the web page normally, After the judgment of port number and flag bit is added later, the false alarm rate is greatly reduced.
In the implementation of the early warning system, only two attacks are considered, and less aspects are considered. After the teacher reminds me, I understand that the source host IP address reflected by NTP can be forged, so the related functions need to be improved. This program only detects the characteristics of SYN Flood and NTP amplification reflection attacks. In addition, the characteristics of other attacks are not considered.