Structural pattern mainly involves how to combine various objects in order to obtain a better and more flexible structure. Although the object-oriented inheritance mechanism provides the most basic function of subclass extending the parent class, the structural pattern not only uses inheritance simply, but also realizes more flexible functions through the dynamic combination of composition and runtime.

The Adapter mode is Adapter, also known as Wrapper. It means that if an interface needs interface B, but the object to be passed in is interface A, what should I do?

Let's take an example. If we go to the United States, the electrical appliances we take with us cannot be used directly. Because the socket standard in the United States is different from that in China, we need an adapter:

We can use adapter to implement it

The steps of writing an Adapter are as follows:

Adapter pattern is widely used in Java standard library. For example, when the data type is String [], but the List interface is required, we can use an adapter:

Notice List < T > arrays Aslist (t []) is equivalent to a converter, which can convert an array into a List.

The Adapter pattern can convert an A interface into A B interface, making the new object conform to the B interface specification.

Writing an Adapter is actually writing A class that implements the B interface and internally holds the A interface:

Only when both A and B interfaces are abstract interfaces can the Adapter pattern be implemented very simply.

Separate the abstract part from its implementation part so that they can change independently.

The definition of bridge mode is very mysterious, and it is not easy to understand it directly, so we still give examples.

Suppose an automobile manufacturer produces three brands of cars: Big, Tiny and Boss. Each brand can choose fuel, pure electric and hybrid. If each final model is represented by traditional inheritance, there are three abstract classes and nine final subclasses: 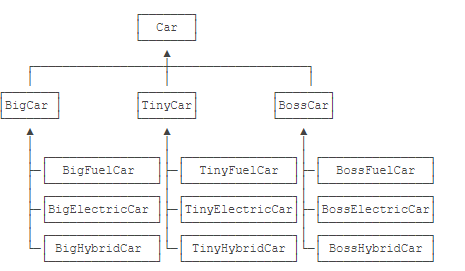 If you want to add a brand or a new engine (such as nuclear power), the number of sub categories will grow faster. Therefore, bridging mode is to avoid subclass explosion caused by direct inheritance.

In the bridging mode, Car is first subclassed by brand. However, what Engine each brand chooses is no longer extended by subclass, but introduced in the form of combination through an abstract "correction" class. Let's take a look at the specific implementation. First, define the abstract class Car, which refers to an Engine:

Engine is defined as follows:

Next, define some additional operations in a "modified" abstract class RefinedCar:

In this way, the final different brands are inherited from RefinedCar, such as boscar:

For each Engine, it is inherited from the Engine, such as HybridEngine:

The client chooses a brand by itself and then cooperates with an engine to get the final Car: 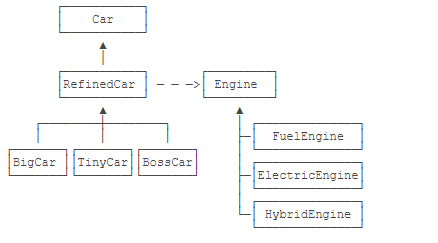 The implementation of bridge mode is complex and its practical application is very few, but the design idea it provides is worth learning from, that is, do not overuse inheritance, but give priority to splitting some components and using combination to expand functions.

The objects are combined into a tree structure to represent the hierarchical structure of "part whole", so that users have consistency in the use of single objects and combined objects.

Composite mode is often used in tree structure. In order to simplify the code, a leaf node and a parent node can be unified by using composite.

Let's take a concrete example. In XML or HTML, starting from the root node, each node may contain any other nodes. These nested nodes form a tree.

To represent XML in a tree structure, we can first abstract the Node type Node:

For example, we define three types of nodes according to this requirement, one is ElementNode, one is TextNode, and one is CommentNode

These three nodes are defined according to the following requirements

The Composite pattern makes leaf objects and container objects consistent, so as to form a unified tree structure and deal with them in a consistent way.

Dynamically add some additional responsibilities to an object. In terms of adding functions, it is more flexible than generating subclasses.

Decorator pattern is a method of dynamically adding functions to an instance of an object at run time. We're in IO Filter mode In fact, the decorator mode has been discussed in the section. In the Java standard library, InputStream is an abstract class, including FileInputStream, ServletInputStream and socket Getinputstream () these inputstreams are the final data sources.

Observe BufferedInputStream and GZIPInputStream. They are actually inherited from FilterInputStream, which is an abstract Decorator. We draw the Decorator pattern as follows:

We also define a TextNode

For core nodes, such as < span >, it needs to inherit directly from TextNode:

Next, in order to implement the Decorator pattern, you need to have an abstract Decorator class:

The core of this NodeDecorator class is to hold a TextNode, which is the TextNode instance to which the function is to be attached. Next, you can write a bold function:

Using Decorator mode, you can add core functions or additional functions independently, and the two do not affect each other;

You can dynamically add any additional functions to the core functions during the run-time.

Provide a consistent interface for a set of interfaces in the subsystem. The Facade pattern defines a high-level interface that makes this subsystem easier to use.

Facade is a relatively simple pattern. Its basic idea is as follows:

The following are the interfaces of the three systems:

If the subsystem is complex and the customer is not familiar with the process, entrust all these processes to the intermediary:

In this way, the client only deals with the Facade and completes all the cumbersome processes of company registration at one time:

Many Web programs have multiple internal subsystems to provide services, and often use a unified Facade entry, such as a RestApiController, so that when external users call, they only care about the interface provided by the Facade, regardless of which internal subsystem handles it.

More complex Web programs will have multiple Web services. At this time, a unified Gateway entrance is often used to automatically forward to different Web services. This Gateway providing a unified entrance is the Gateway. In essence, it is also a Facade, but some additional services such as user authentication and flow and speed limit can be attached.

The Facade mode is to provide a unified entrance for the client and shield the call details of the internal subsystem.

The core idea of Flyweight is very simple: if an object instance is immutable once it is created, it is not necessary to create the same instance repeatedly. Just return a shared instance to the caller directly, which not only saves memory, but also reduces the process of creating objects and improves the running speed.

The meta pattern has many applications in the Java standard library. We know that wrapper types such as Byte and Integer are invariant classes. Therefore, it is not necessary to create the same wrapper type with the same value repeatedly. Take Integer as an example, if we pass Integer Valueof() is a static factory method that creates an Integer instance. When the incoming int range is between - 128 ~ + 127, it will directly return the cached Integer instance:

In practical application, the meta sharing mode is mainly used for caching, that is, if the client repeatedly requests some objects, it does not have to query the database or read files every time, but directly return the cached data in memory. Taking Student as an example, we design a static factory method, which can return cached objects internally:

In practical applications, we often use mature cache libraries, such as Guava of Cache , because it provides practical functions such as maximum cache limit and timed expiration.

The design idea of shared meta pattern is to reuse the created objects as much as possible, which is often used for internal optimization of factory methods.

Provide a proxy for other objects to control access to this object.

The code of Proxy mode is as follows

It looks like the same, but the different place is here a.a();， It seems that we haven't done anything, but we can add permission check function to the code, so we can realize permission check:

Some children's shoes will ask, why not write the permission check function directly into the interior of target instance A?

Because we write code according to the following principles:

Using Proxy to implement this permission check, we can get clearer and more concise code:

If we want to write other types of proxies, we can continue to add similar ALogProxy without modifying the existing A interface and ABusiness class.

In fact, permission checking is only an application of proxy mode. Proxy is also widely used in:

The Remote Proxy is the Remote Proxy. The interface held by the local caller is actually a proxy. This proxy is responsible for converting the method access to the interface into a remote call, and then returning the result. The RMI mechanism built in Java is a complete Remote Proxy mode.

Smart Reference is also a proxy object. If many clients access it, it can be automatically released after the external callers do not use it through the internal counter.

By encapsulating an existing interface and returning the same interface type to the caller, the proxy mode enables the caller to enhance some functions (such as authentication, delayed loading, connection pool reuse, etc.) without changing any code.

Using Proxy mode requires the caller to hold the interface, and the class as Proxy must also implement the same interface type.