When multiple execution units (threads, interrupts) execute a critical zone simultaneously, operating on critical resources can result in races, which can be resolved in a synchronous or mutually exclusive manner.

Threads are mutually exclusive and can be viewed as a special type of thread synchronization.

For bare metal, global flag is generally used to achieve synchronization and mutually exclusive access to critical resources. Usually the CPU always polls to see if the flag meets the occupancy criteria. In RTOS, critical zone resources are generally protected by semaphores, mutexes, event sets, etc. For semaphores, when the semaphore instance resource is empty, the thread enters the blocked state and waits for the semaphore to arrive, but when there is a semaphore resource, the thread is immediately awakened, which reduces CPU resource consumption and provides the fastest real-time response speed.

Semaphore is a lightweight kernel object used to solve the problem of inter-thread synchronization, which can be acquired or released by threads for synchronization or mutually exclusive purposes.
Composition of semaphore objects in RT-Thread:

Usually a semaphore count value (sem->value) is used to indicate the number of resources that can be occupied. It can only be 0 and a positive integer maximum (65535). Successful release of the semaphore will add 1 to the value, and successful acquisition of the semaphore will subtract 1 from the value. A value of 0 indicates that the resource is empty, and threads that want to acquire the semaphore are blocked and suspended in the thread waiting queue.

The semaphore mutex and synchronization are used differently as follows:

Note: Mutual exclusion between interrupts and threads cannot be semaphore-based, but switch-based.

The semaphore control block is a data structure used by the operating system to manage semaphores:

Where sem->value is the resource count value, sem->parent. Suspend_ Threads are threads suspended because they failed to acquire the semaphore, which are inserted into the chain table in either thread priority or FIFO order using a two-way circular chain table store.

Static initialization and detachment (static objects cannot be deleted) objects are functionally identical to the functions described above and are no longer discussed.

RT_ WAITING_ The NO macro value is 0, even if the semaphore is obtained without waiting time.

The serial port print information is as follows: 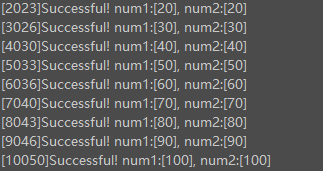 Note: Mutual exclusion can be seen as a special thread synchronization

The serial port print information is as follows: