Detailed explanation and application of merging and sorting

After reading this article, you can not only learn the algorithm routine, but also win the following topics on LeetCode:

315. Calculate the number of elements on the right that are smaller than the current element (difficult)

Many readers have always said that they want me to use it Frame thinking To talk about the basic sorting algorithm, I think we really have to talk about it. After all, learning everything requires a comprehensive understanding. Only by deeply understanding its essence can it be used freely.

This article will first talk about merging and sorting, give a set of code templates, and then talk about its application in algorithm problems. Before reading this article, I hope you have read it Brush the binary tree hand in hand (program part).

I am here Hand brush binary tree (phase I) When talking about binary trees, I mentioned merge sort, saying that merge sort is the post order traversal of binary trees. At that time, many readers left messages saying that they were impressed.

Do you know why many readers feel brain burn when they encounter recursive algorithms? Because it is still in the stage of "looking at mountains is mountains, looking at water is water".

Let's say merge and sort. If I show you the code and ask you to fill in the process of merge and sort, what scene will appear in your mind?

This is an array sorting algorithm, so you can supplement the GIF of an array and exchange elements one by one? If so, the pattern will be low.

But if you have a binary tree in your mind, or even the scene of traversing the binary tree in sequence, the pattern is high, and you probably master what I often emphasize Frame thinking , learning algorithms with this abstract ability saves much effort.

So, merge sort is obviously an array algorithm. What's the relationship with binary tree? Next, I'll talk about it in detail.

Look at the code framework of merging and sorting:

Looking at this framework, we can understand the classic summary: merge sorting is to arrange the left half array first, then the right half array, and then merge the two half arrays.

The above code is very similar to the post order traversal of binary tree:

Further, think about the algorithm code for finding the maximum depth of binary tree:

The process of merging and sorting can be logically abstracted into a binary tree. The value of each node in the tree can be considered as num [Lo.. hi], and the value of leaf node is a single element in the array: 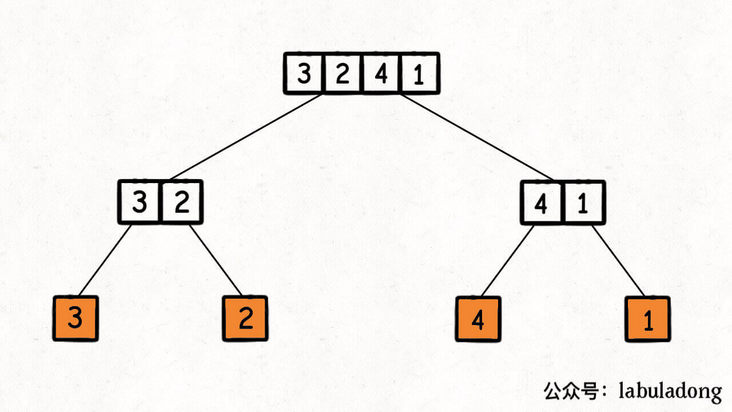 Then, execute the merge function at the post order position of each node (the left and right child nodes have been ordered) to merge the sub arrays on the two child nodes: 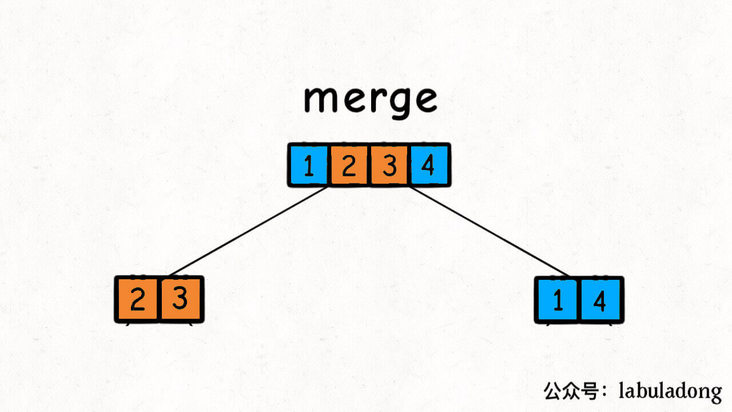 After traversing the binary tree, you should be familiar with it. The traversal sequence is as follows: 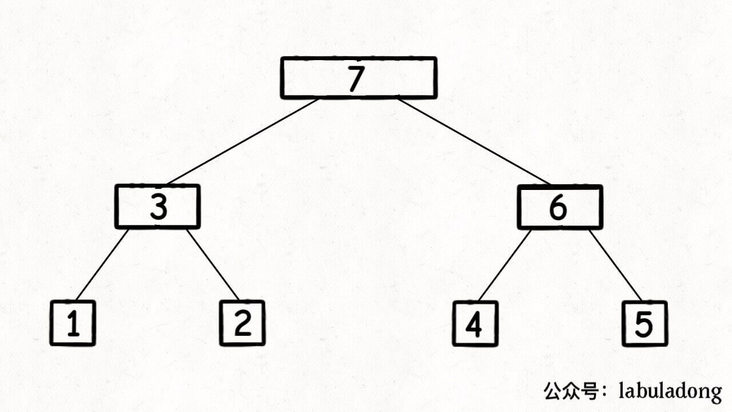 Combined with the above basic analysis, we understand num [Lo.. hi] as a node of a binary tree, and srot function as an ergodic function of a binary tree. The execution process of merging and sorting is described in the following GIF:

In this way, the core idea of merging and sorting is analyzed. Next, just translate the idea into code.

As long as you have the right way of thinking, it is not difficult to understand the idea of the algorithm, but it is also a test of one's programming ability to realize the idea into code.

After all, the time complexity of the algorithm is only a theoretical measure, and the actual operation efficiency of the algorithm needs to consider more factors, such as avoiding the frequent allocation and release of memory, and the code logic should be as concise as possible.

With the previous foreshadowing, we only need to focus on the merge function.

After the sort function recursively sorts nums[lo..mid] and nums[mid+1..hi], we can't merge them in place, so we need to copy them into the temp array, and then Six skills of single linked list The double pointer technique of merging ordered linked lists in combines nums[lo..hi] into an ordered array: 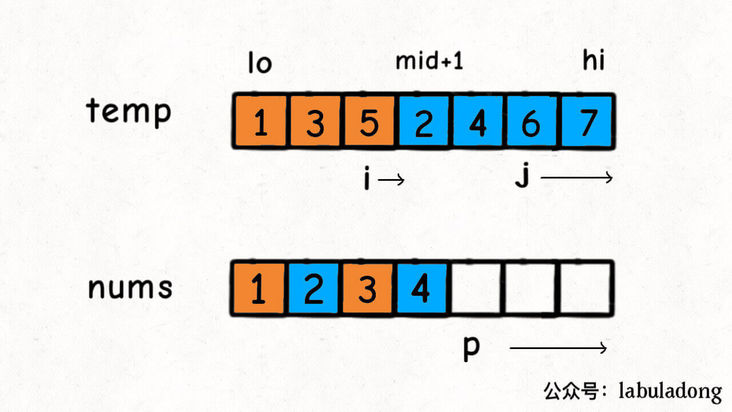 Let's talk about the time complexity of merging and sorting. Although everyone should know that it is O(NlogN), not everyone knows how to calculate this complexity.

Therefore, on the whole, the height of the binary tree is logN, in which the number of elements in each layer is the length N of the original array, so the total time complexity is O(NlogN).

Li Kou's question 912 "sorting arrays" is to let you sort arrays. We can directly apply the merge sorting code template:

In addition to the most basic sorting problem, merge sorting can also be used to solve the 315 question "calculate the number of elements less than the current element on the right": 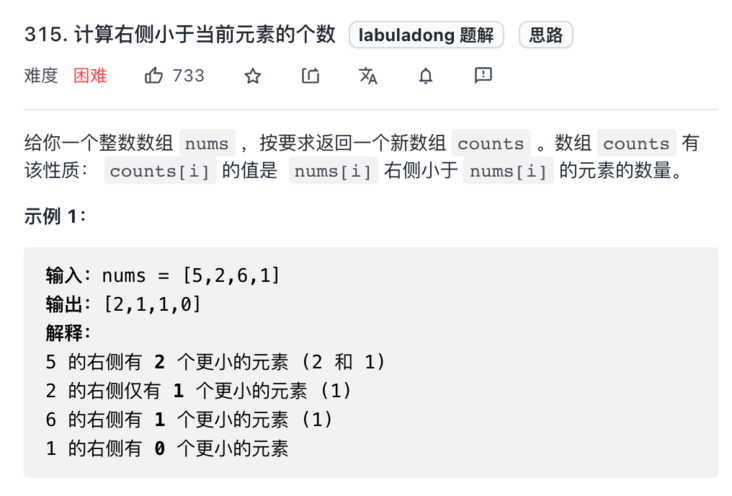 Let's not talk about the violent solution of patting the head. Nested for loops have square level complexity.

What is the relationship between this question and merging and sorting? It is mainly in the merge function. When we merge two ordered arrays, we can actually know how many numbers are smaller than x after a number x.

Specifically, for example, this scenario: 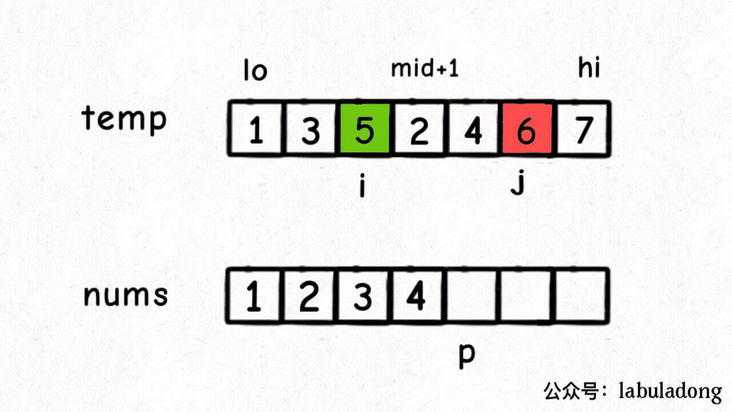 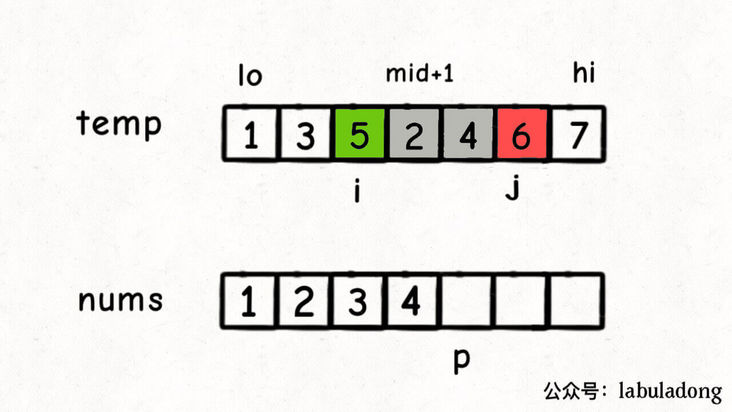 In other words, in the process of merging nuns[lo..hi], whenever num [P] = temp[i] is executed, it can be determined that the number of elements smaller than temp[i] is j - mid - 1.

Of course, Num [Lo.. hi] itself is only a sub array. This sub array will be merged later, and the position of the elements will still change. But this is a problem that other recursive nodes need to consider. We just need to do some tricks in the merge function and superimpose the results recorded during each merge.

After discovering this rule, we can solve this problem by adding two lines of code to the merge. Look at the solution code:

Because the index position of each element will change constantly during sorting, we use a Pair class to encapsulate each element and its index in the original array num, so that the count array records the number of elements less than it after each element.

Now look back and realize what I said at the beginning of this article:

Have you tasted anything?

Let me leave a question for thinking. I will talk about quick sort in the next article. Can you try to understand quick sort from the perspective of binary tree? If you were asked to summarize the logic of quick sort in one sentence, how would you describe it?

Well, the answer will be revealed in the next article.

Click on my avatar See more high-quality algorithm articles, take your brush force buckle with your hand, and strive to explain the algorithm clearly! my Tutorial algorithm 100k star has been obtained. Welcome to like it!