An unexpected event that occurs when a program is running, which prevents the program from executing normally as expected by the programmer. This is an exception. When an exception occurs, do you allow the program to live and die, exit and terminate immediately, or output an error to the user? Or C language style: using function return value as execution state?.

The exception in Java can be caused by the execution of the statement in the function or thrown manually by the programmer through the throw statement. As long as an exception is generated in the Java program, an exception object of the corresponding type will be used to encapsulate the exception, and JRE will try to find an exception handler to handle the exception.

Throwable class is the top-level parent class of Java exception type. Only when an object is an instance of throwable class (directly or indirectly), it is an exception object and can be recognized by the exception handling mechanism. Some common exception classes are built in JDK, and we can also customize exceptions.

Some general exceptions are built in the Java standard pants. These classes take Throwable as the top-level parent class.

Error: the instance of the error class and its subclasses represents the error of the JVM itself. Errors cannot be handled by programmers through code, and errors rarely appear. Therefore, programmers should pay attention to various Exception classes under the branch with Exception as the parent class. 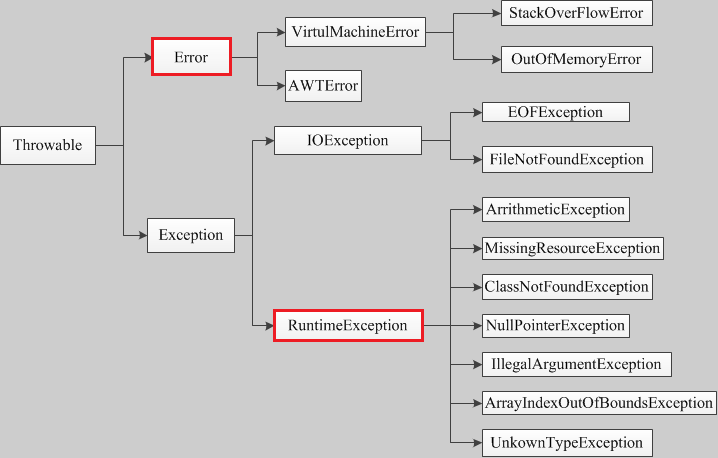 In general, we divide the exception classes into two categories according to the requirements of Javac for exception handling.

Unchecked exception: Error and RuntimeException and their subclasses. java c will not prompt and find such exceptions during compilation, and it is not required to handle these exceptions in the program. So if you like, we can write code to handle such exceptions (using try...catch...finally) or not. For these exceptions, we should modify the code instead of handling them through the exception handler. Most of the reasons for such exceptions are code writing problems. For example, in addition to 0 error ArithmeticException, wrong forced type conversion error ClassCastException, array index out of bounds ArrayIndexOutOfBoundsException, null object NullPointerException, etc.

It should be clear that check and non check are for javac, which is easy to understand and distinguish.

The following code demonstrates two exception types: ArithmeticException and inputmismatch exception. The former is caused by dividing the integer by 0, and the latter is caused by the input data that cannot be converted to int type.

I only heard the voice of the architect from the architect's office: Recalling Gaoyang, people scattered. Who will match the first couplet or the second couplet?

Exceptions are triggered when a function is executed, and the function is called hierarchically, forming a call stack, because as long as an exception occurs to a function, all its caller s will be affected by the exception. When these affected functions are output with exception information, an exception tracking stack is formed.

In the code, I choose to use throws to declare exceptions and let the caller of the function deal with possible exceptions. But why only throw IOException? Because FileNotFoundException is a subclass of IOException, it is within the processing range.

When writing code to handle exceptions, For checking exceptions, there are two different ways to handle them: using try catch... The finally statement block handles it. Alternatively, use the throws declaration in the function signature and give it to the function caller caller to solve it.

2. Each catch block is used to handle an exception. Exception matching is searched from top to bottom according to the order of catch blocks. Only the first matched catch will be executed. When matching, it not only runs exact matching, but also supports parent matching. Therefore, If multiple catch exception types under the same try block have parent-child relationship, you should put the child exception in front and the parent exception in the back, so as to ensure that each catch block has the meaning of existence.

In some programming languages, when the exception is handled, the control flow will return to the exception throwing point and then execute. This strategy is called: resumption model of exception handling

Java restores the execution flow to the catch block that handles the exception and then executes it. This strategy is called: termination model of exception handling

Throws declaration: if the code inside a method will throw checked exception s, and the method itself does not completely handle them, javac ensures that you must use the throws keyword on the method signature to declare these possible exceptions, otherwise the compilation will not pass.

Throws is another way to handle exceptions, which is different from try catch... Finally, throws only declares the possible exceptions in the function to the caller, but does not deal with them in detail.

The reason for this exception handling may be that the method itself does not know how to handle such exceptions, or let the caller handle them better, and the caller needs to be responsible for possible exceptions.

Finally block no matter whether an exception occurs or not, as long as the corresponding try is executed, it must also be executed. There is only one way to make the finally block not execute: system exit(). Therefore, finally blocks are usually used to release resources: close files, close database connections, and so on.

This is normal, but there are exceptions. finally, there are many disgusting, eccentric, strange and difficult problems. At the end of this article, I will uniformly introduce elevator speed - >: finally block and return

Looking at the source code of Throwable class, we can find that there is a Throwable field cause, which saves the root exception parameters passed during construction. This design is the same as the node class design of the linked list, so it is natural to form a chain.

The following is an example to demonstrate the chaining of exceptions: input two ints from the command line, add them, and output. If the input number is not int, it will cause getInputNumbers exception, which will cause the add function exception. You can throw it in the add function

According to international conventions, custom exceptions should always contain the following constructors:

The following is the complete source code of IOException class, which can be used for reference.

As for why? I think maybe the following example can illustrate.

In other words, exceptions in Java are thread independent. The thread problem should be solved by the thread itself, not entrusted to the outside, and will not directly affect the execution of other threads.

First, a fact that is not easy to understand: in the try block, even if there are return, break, continue and other statements that change the execution flow, finally will execute.

When facing this problem, many people are always summarizing the order and law of execution, but I think it is still difficult to understand. I summed up a method myself. Use the following GIF diagram to illustrate.

That is to say: try catch... All returns in finally are executed as long as they can be executed. They jointly write the return value to the same memory address (assuming the address is 0x80). The later executed data will overwrite the data executed first, and the return value taken by the real caller is the last written value. Then, according to this idea, the following example is not difficult to understand.

Return in finally overrides the return value in try or catch.

The above three examples are different from ordinary people's coding thinking, so I suggest: