Here are some inline snippets.

For any data structure, our operations are nothing more than the basic operations of creating, destroying, adding, deleting, modifying and checking. Only by mastering these basic operations can we expand more functions
In fact, a single linked list can be divided into two types: one with a head node and the other without a head node. What is the difference between the two?

For a single linked list, if we want to delete an element at a certain position, it is obvious that the first step is to find the previous position first, and then point the next pointer of the previous element at this position to the part we want to insert, and the next pointer of the part we want to insert points to the element originally at this position
For example, we insert the P node in the third position

Then we find the second position b first. After finding it, we point a - > next to p and p - > next to b

When implemented in code, we encapsulate it into an insert function. Here we should see that we should have three parameters: list * & L, a linked list, int n, the nth position, and the element to be inserted in int e

In fact, the principle of deletion and addition are also very important. The first step is to find the previous P of the position to be deleted, and then let P directly point to p - > next - > next, and then clean up the P in the memory
For example, delete the third c

After writing here, it is estimated that many careful friends have found that our previous string of search for the n-1 position and insertion operation have basically not changed, but only the later logical operation. Therefore, we can use a method to package the previous block for our maintenance

In fact, as long as it can be written for search, modification is just to modify the data item on the basis of search

The establishment of single linked list is divided into two modes, one is head interpolation and the other is tail interpolation
Head insertion

For example, if we want to add a new element p to the linked list, the method of header insertion is to add it to the back of the header node every time

Head node
p
a
b
c

For example, if we want to add a new element p to the linked list, the tail interpolation method is to add it to the back of the last node every time

Therefore, when we add, delete, check and change the two-way linked list, we only need to take into account its precursor pointer every time

Head node
a
b
c
d

Although the double linked list is a little more difficult than the single linked list, in fact, if we understand it, adding and deleting is just an operation on these three nodes, such as initializing init()

In addition to adding operations, there are also search, delete operations and so on. I won't show you the code here. I hope you can realize it in private

As for the following interfaces, such as insert(),remove(), I won't repeat them here, because it's relatively easy to write code as long as you master the basic principles

To store data in a sequence table, you need to apply for a large enough storage space in advance, and then store the data one by one in order. The advantage is that the storage density is high, because it does not need to store pointers like a linked list, but because its length is limited, it is not conducive to dynamic adjustment. However, because the sequence table is directly addressed based on array subscripts, the search speed is faster than the linked list, When deleting and adding at the same time, it is not as simple as the linked list. It is only necessary to operate the two items in the current position 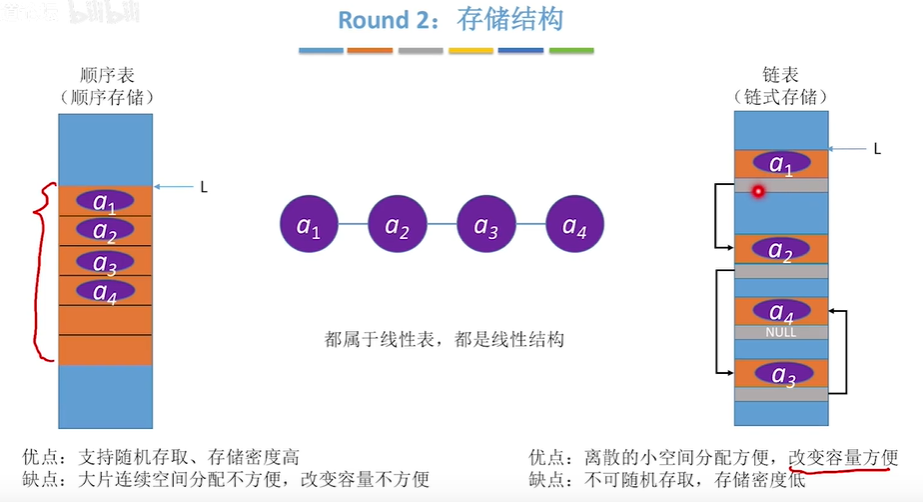 How to select linked list and sequential list?
Storage based considerations:
The storage space of the sequence table is allocated and unchanged. The size of its storage space must be clearly specified before the program is executed, that is, the "maxsize" must be set appropriately in advance, which will cause waste if it is too large and overflow if it is too small. When it is difficult to estimate the length or storage scale of linear table, sequential table should not be used; The linked list does not need to estimate the storage scale in advance.
2. Based on the consideration of operation:
If the frequent operation is to access data elements by serial number, it is obvious that the sequential list is better than the linked list; When inserting and deleting in the sequence table, half of the elements in the table will be moved on average. When the amount of information of data elements is large and the table is long, this should not be ignored; Insert and delete in the linked list. Although the insertion position should also be found, the operation is mainly a comparison operation. From this point of view, it is obvious that the linked list is better than the sequential list.
3. Based on environmental considerations:
The sequential list is easy to implement. There are array types in any high-level language. The operation of the linked list is based on pointers. Relatively speaking, the former is simpler

For learning data structure, linear table is only the most basic. I hope I can make persistent efforts and understand its principle. Finally, I hope you can praise, pay attention and support. Thank you~~~~