Features: self attention layers, end-to-end set predictions, bipartite matching loss
The DETR model has two important parts:
1) A set prediction loss that ensures a unique match between the real value and the predicted value.
2) An architecture that can predict (one-time) target sets and model their relationships.
3) Due to the addition of self attention mechanism, and in the process of learning, the audience's attention training is very good, and everyone's concerns are different, so the segmentation effect is very good and effectively solve the occlusion problem 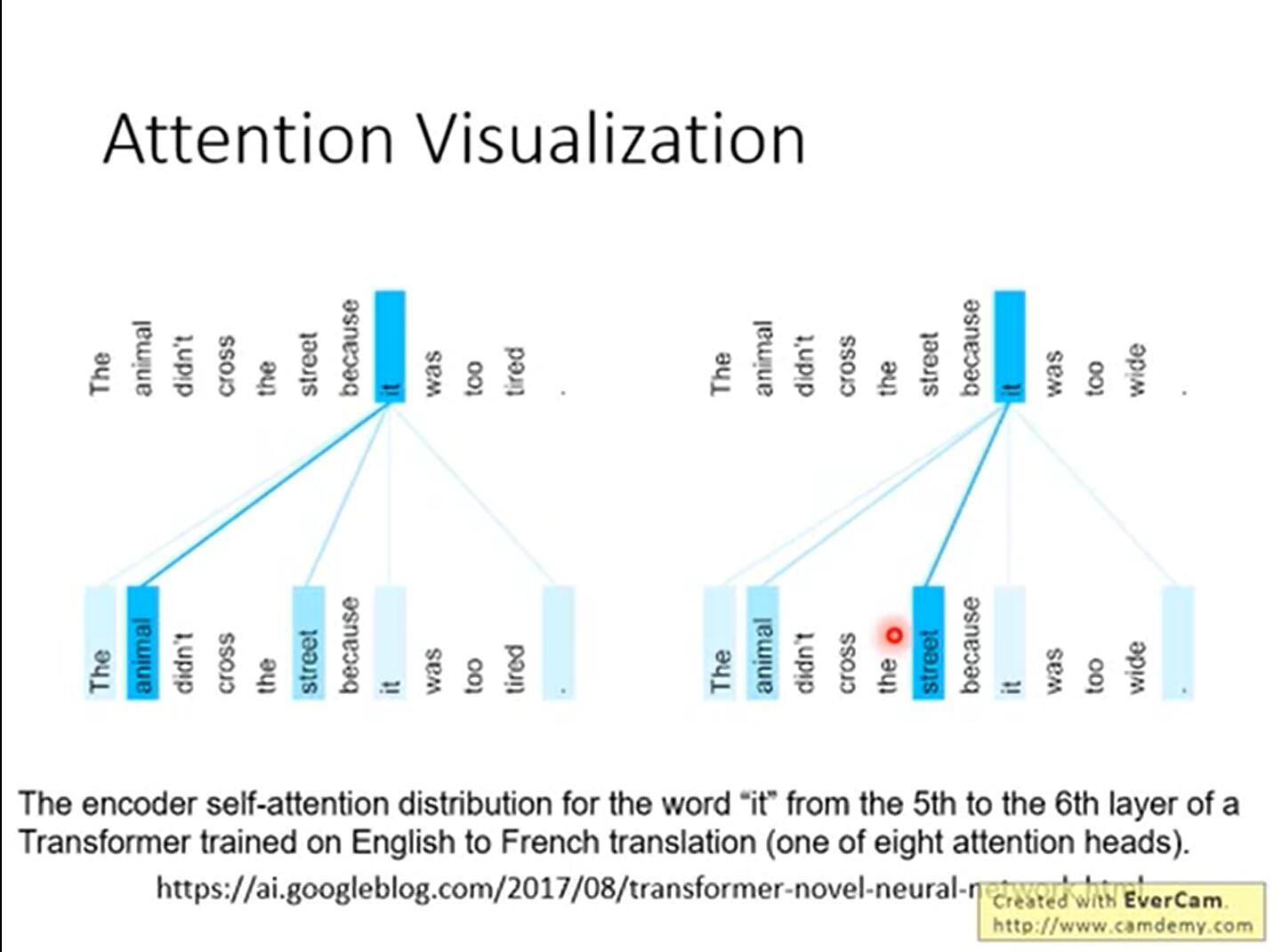 DETR regards the target detection task as an image to set problem, that is, given an image, the prediction result of the model is an unordered set containing all targets.
This task transforms the target detection task into a set prediction task. Using the transformer codec structure and bilateral matching method, the prediction result sequence is directly obtained from the input image It does not generate anchor, but directly generates prediction structure
Disadvantages: it is poor for small target and multi-target scenes

1.1 one hot matrix: it refers to a matrix in which each row has one and only one element is 1 and other elements are 0. For each word in the dictionary, we assign a number. When encoding a sentence, we can convert each word into a one hot matrix with the corresponding position of 1 in the dictionary. For example, we want to express "the cat sat on the mat", which can be expressed by the following matrix. 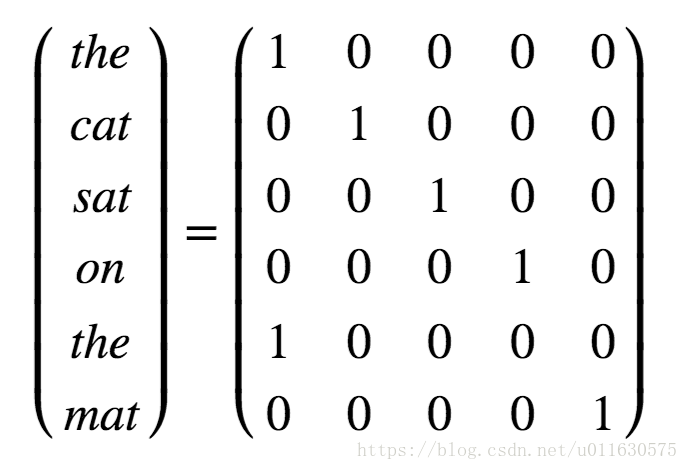 The one hot representation is very intuitive, but it has two disadvantages. First, the length of each dimension of the matrix is the length of the dictionary. For example, if the dictionary contains 10000 words, the one hot vector corresponding to each word is a 1X10000 vector, and only one position of this vector is 1, and the rest are 0, which wastes space and is not conducive to calculation. Second, the one hot matrix is equivalent to simply numbering each word, but the relationship between words can not be reflected at all. For example, the relevance of "cat" and "mouse" is higher than that of "cat" and "cell phone", which is not reflected in the one hot representation.

1.2 Word Embedding vector Word Embedding: solves these two problems. The Word Embedding matrix assigns a fixed length vector representation to each word. This length can be set by itself, such as 300, which is actually much smaller than the dictionary length (such as 10000). And the angle between two word vectors can be used as a measure of their relationship. As follows 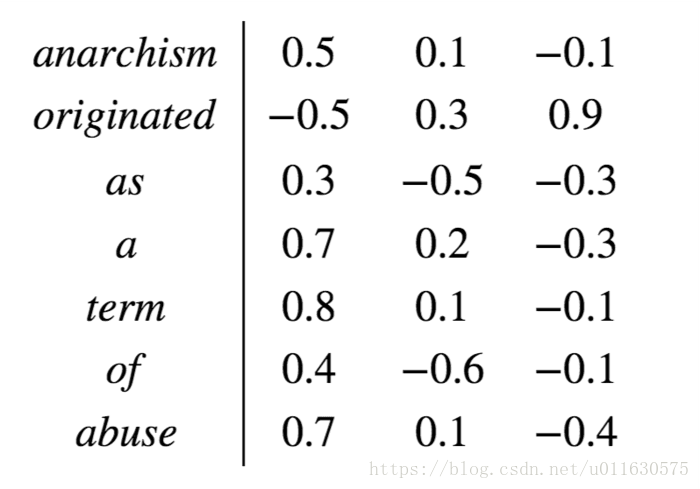 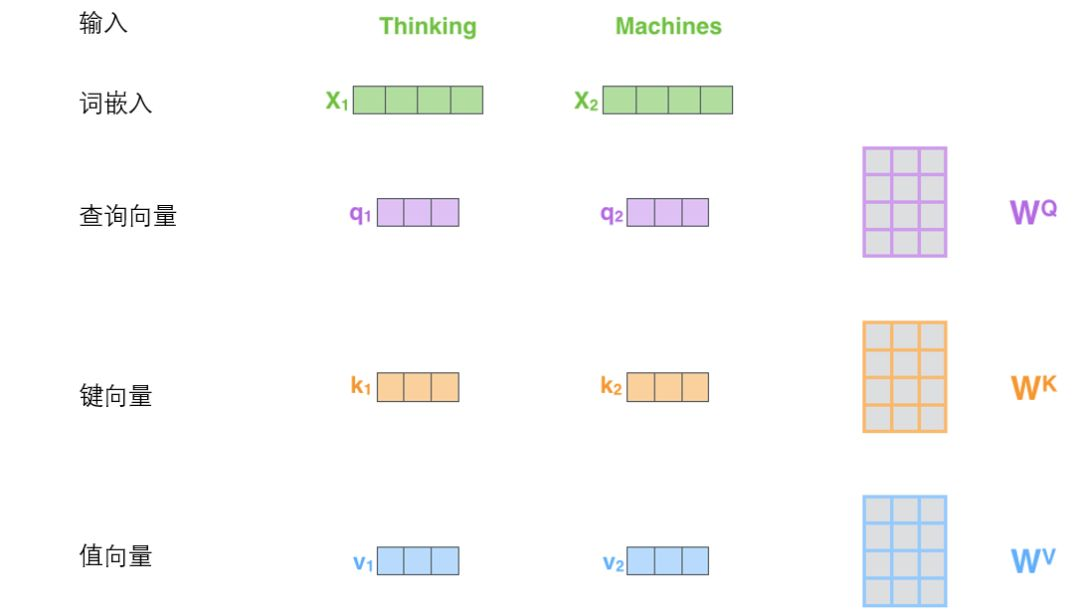 The three w matrices are the matrices to measure qkv weight. The weight matrices are all trained. The first step of self attention is to generate three vectors from the input vector of each encoder (the word vector of each word). That is, for each word, we create a query vector, a key vector and a value vector. These three vectors are created by word embedding and multiplying with three weight matrices.
Query vector: the embedded vector of each word is multiplied by the WQ vector. Used to multiply all key vectors to get scores directly.
Key vector: similarly, each word is embedded into the vector and W K.
Value vector: ditto. Used to weight the score of each word.
1.3 calculation steps of self attention: 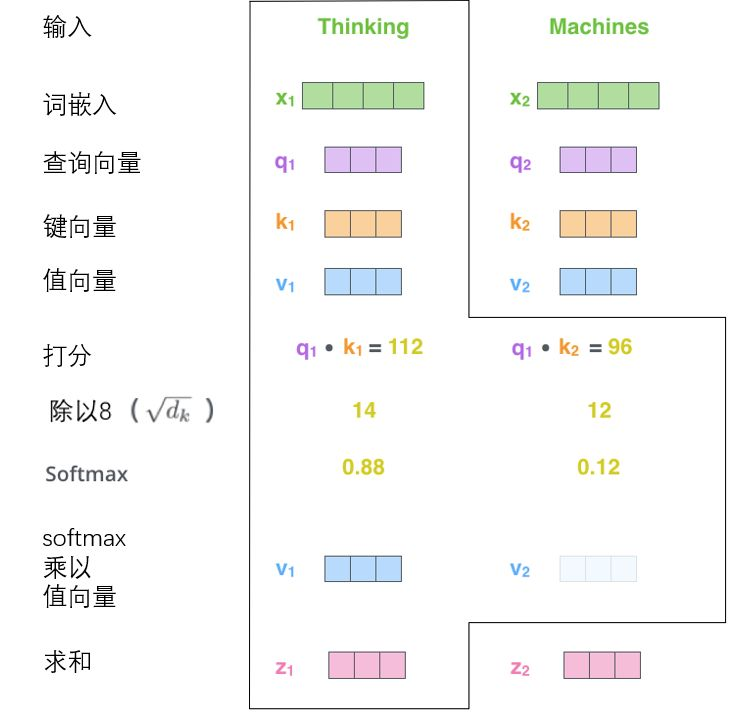 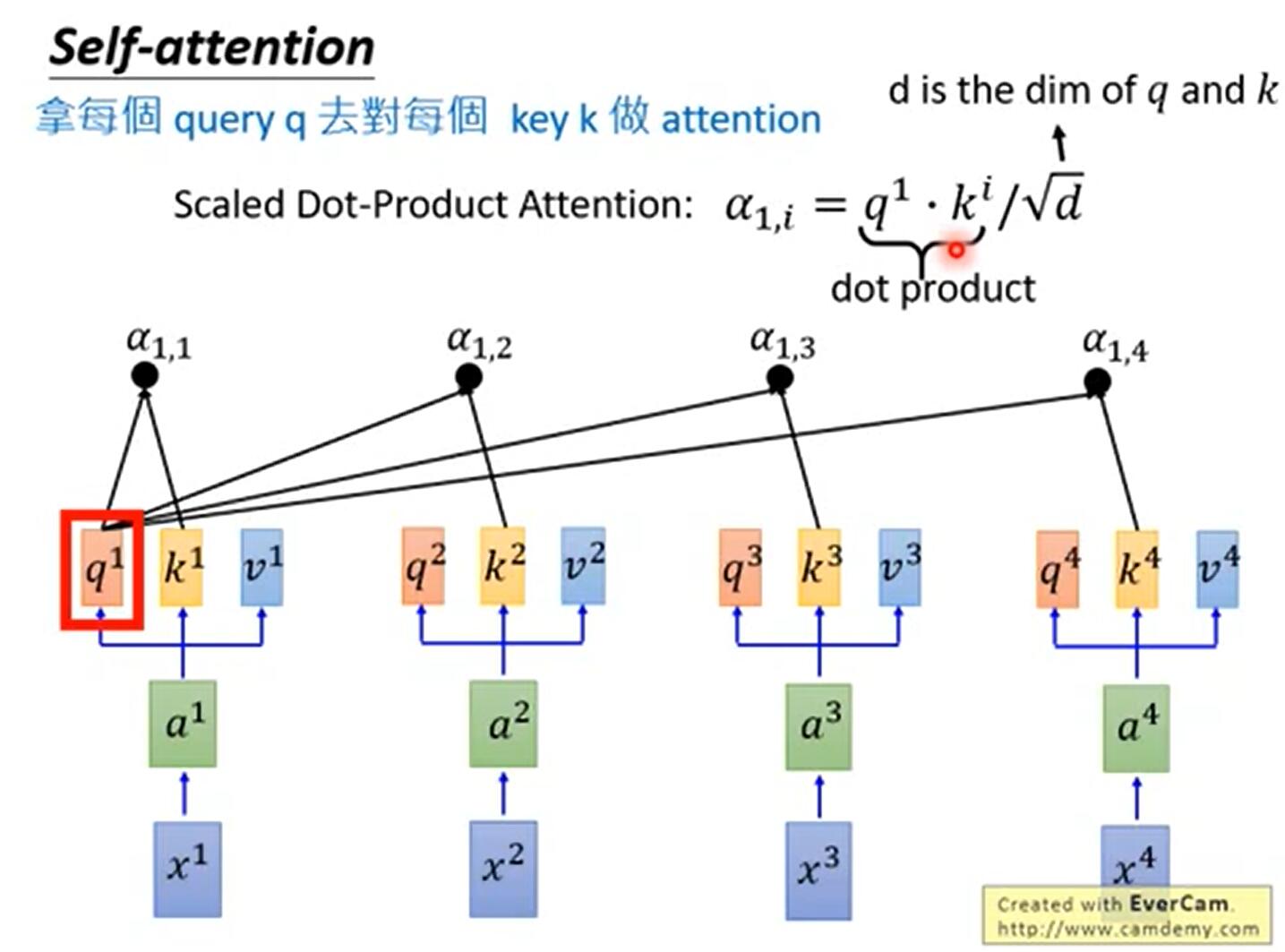 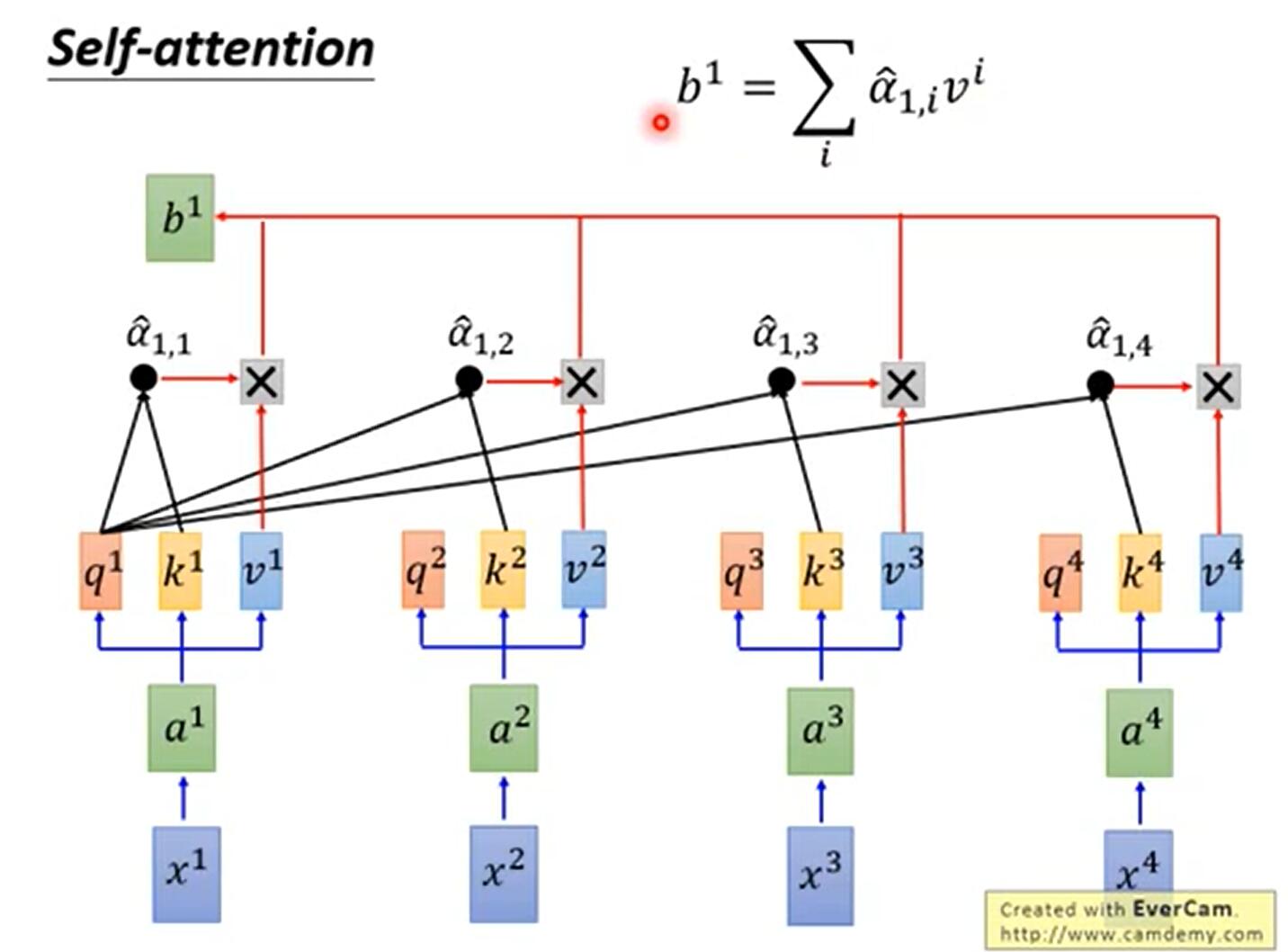 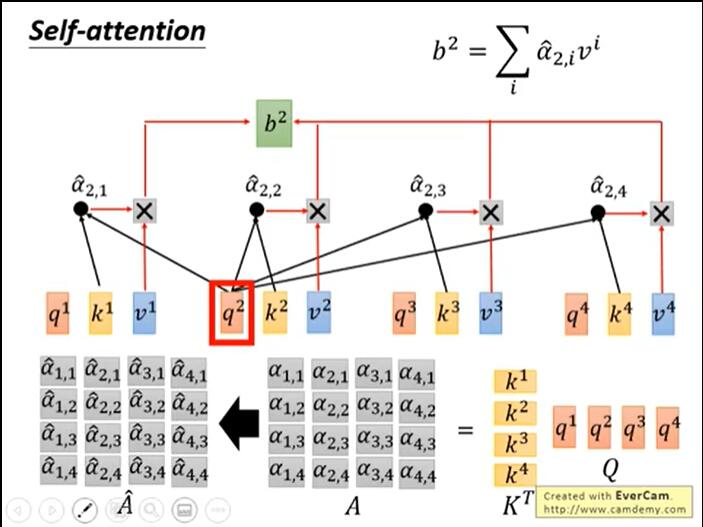 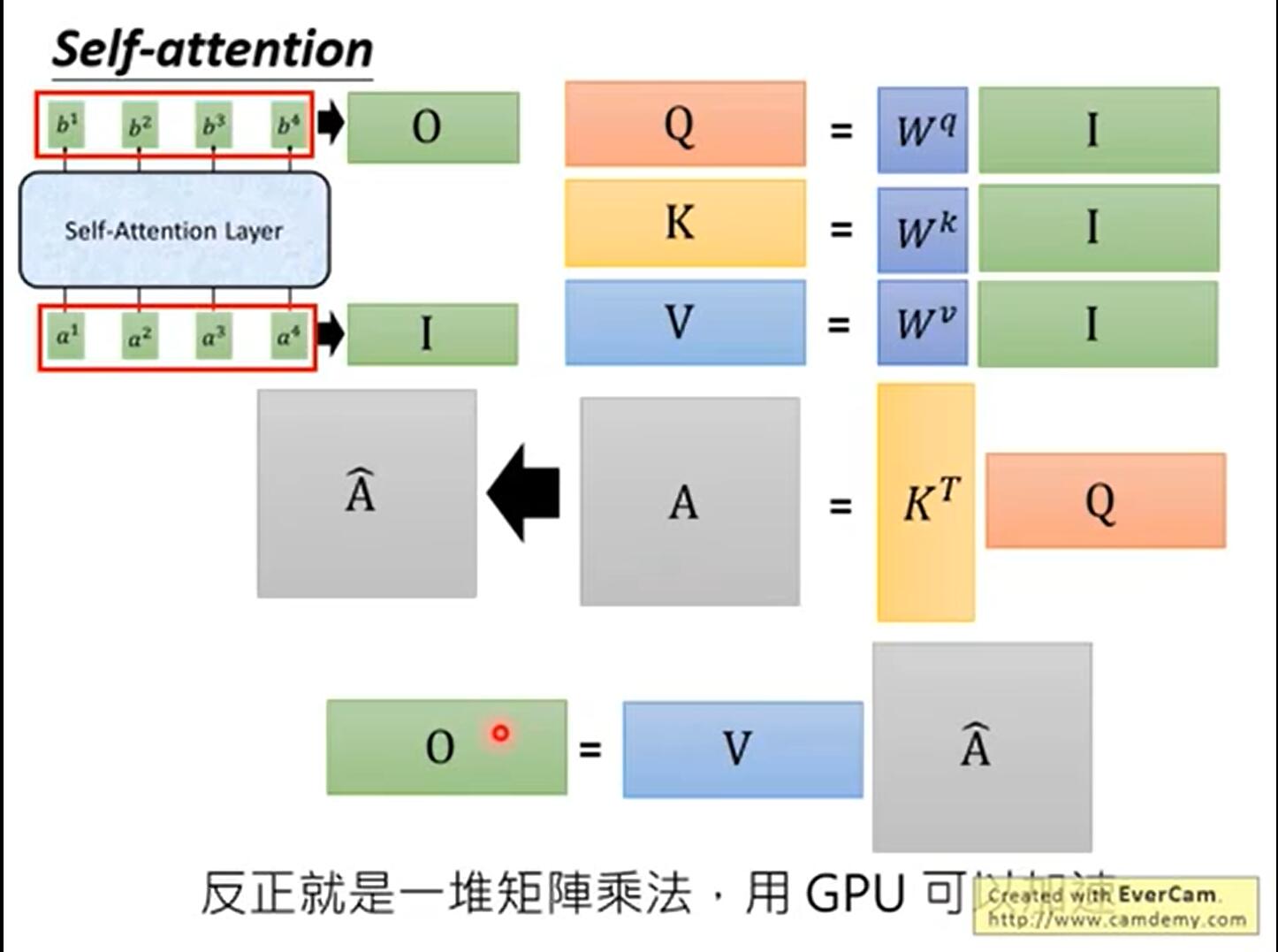 1. Multiply the query vector by each key vector to get a score, such as 112 and 96. This score evaluates the relevance of Thinking and Machines to themselves and other words.

2. Divide the score by the square root of the dimension of the key vector (sqrt{64}=8), and the dimension penalty item, which is conducive to the stability of the gradient.

3. Normalize softmax and get a weight for each word.

4. Weighted sum each value vector according to the weight of each word. Get Z i

1.4 multi head self attention: for the "multi head" attention mechanism, we have multiple query / key / value weight matrix sets (Transformer uses eight attention heads, so we have eight matrix sets for each encoder / decoder). Each of these sets is randomly initialized, and after training, each set is used to project input words embedded (or vectors from lower encoders / decoders) into different representation subspaces 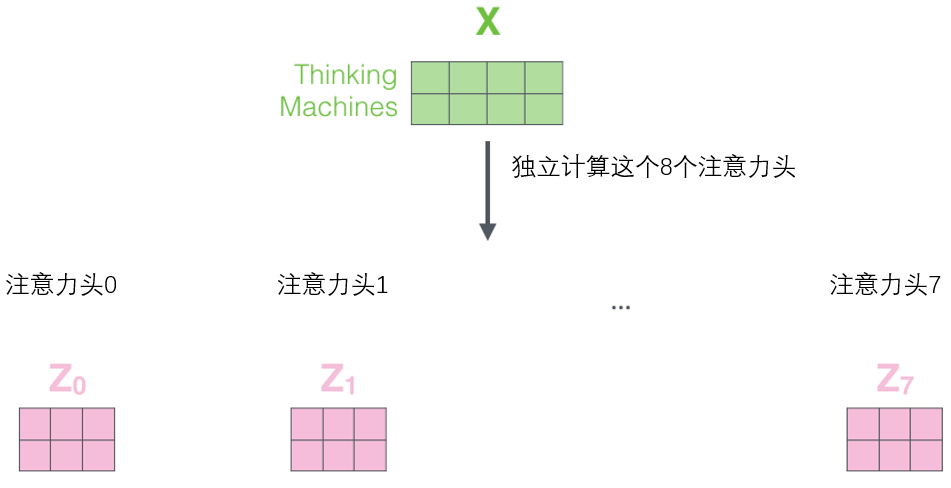 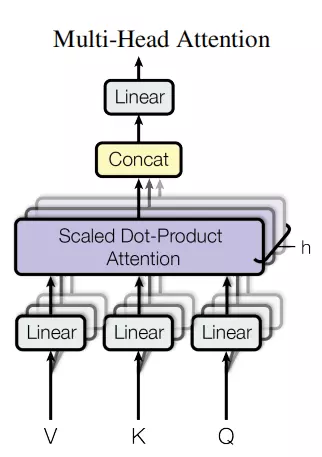 Then give eight matrices to concat, and then a training number matrix w0 to give him fusion attention 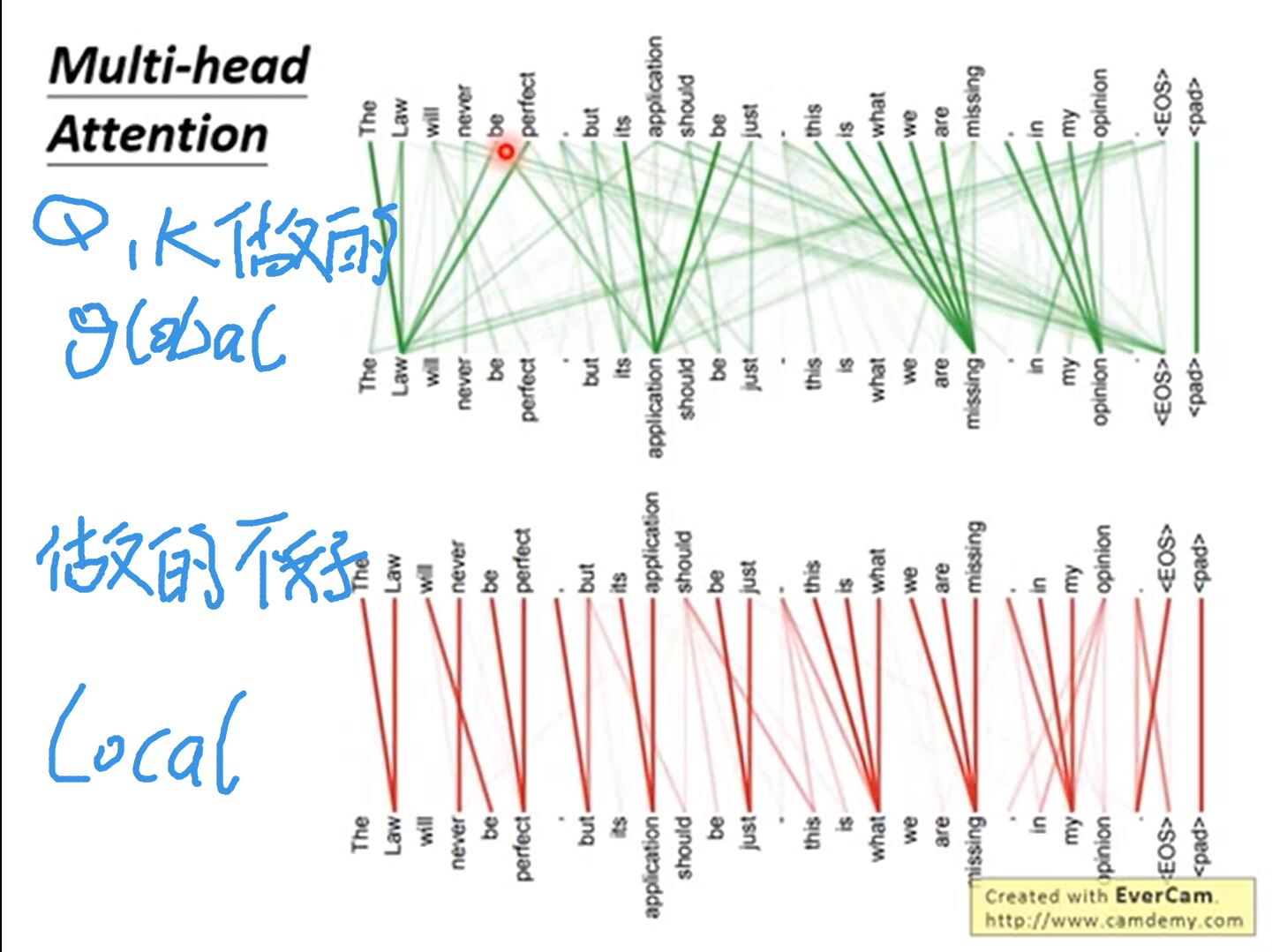 1.5 position encoding:
In NLP, words in sentences also need a location code to establish the distance between words. The encoder adds a vector for each input embedding, which conforms to a specific pattern and can determine the position of each word or the distance between different words in the sequence. For example, if the dimension of input embedding is 4, the actual positive encodings are as follows:

1. The author's own thoughts in the code

A new data type created by the author is used to store features: tensor is the value of our pictures. When the pictures in a batch are different in size, we should deal with them neatly. In short, we should pad the pictures to the maximum size. The way of padding is to fill in zeros. Then each picture in the batch has a mask matrix, A mask matrix is used to indicate which are real data and which are padding, and 1 represents real data; 0 represents padding data.

detr did not propose a new layer, but directly proposed a new framework. First pass through the traditional cnn to extract features, and then conduct positive encoding at the same time. After the encoder and decoder of Transformer, the results are obtained through simple forward propagation network (FNN). 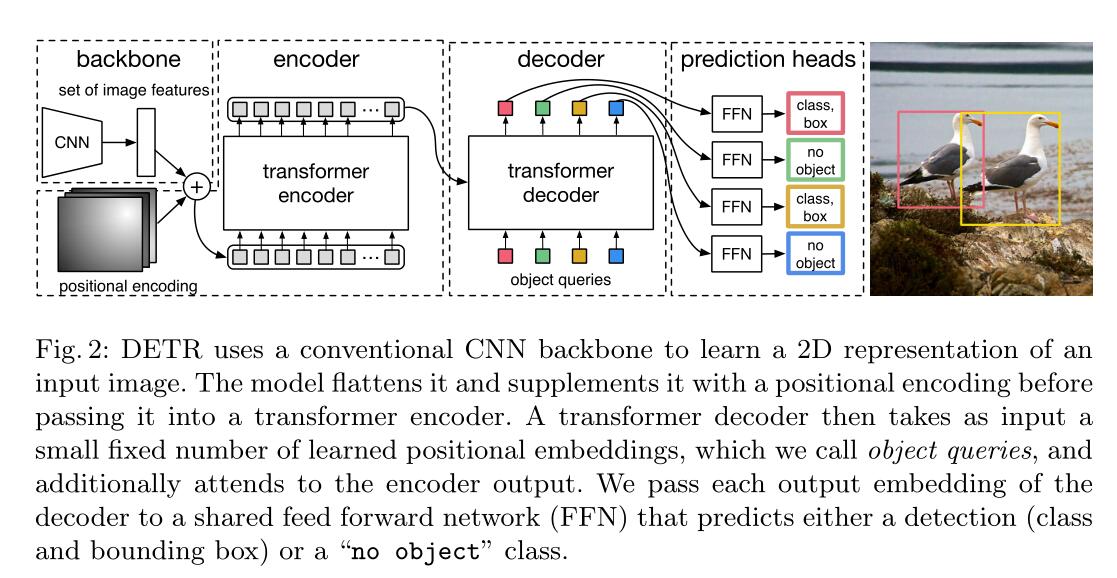 His requirements are relatively simple, as long as they are met
The input is C=3 × H × W. The outputs are C = 2048 and h, W = H / 32, W / 32.
After that, all feature map s are flattened and turned into CxWH scale. At this time, the location information is two-dimensional 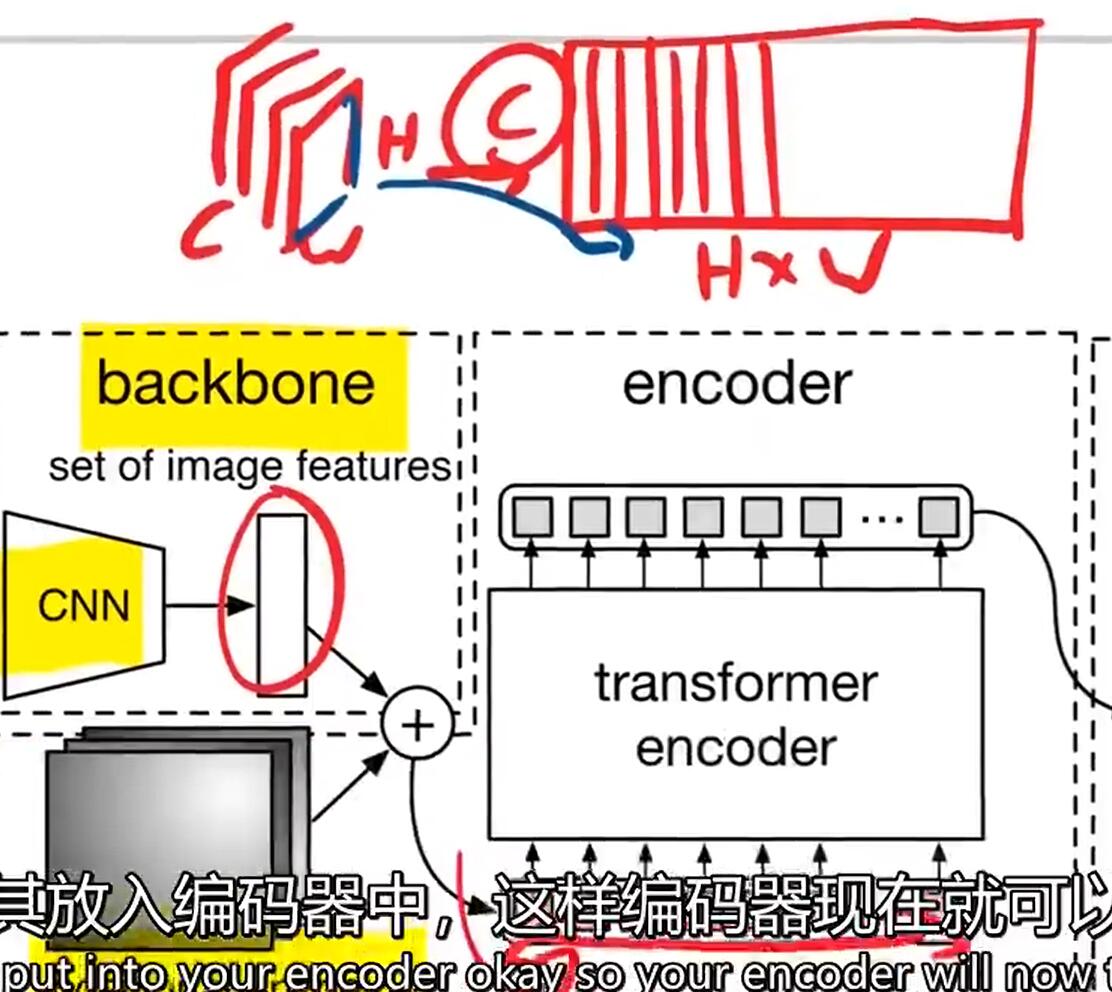 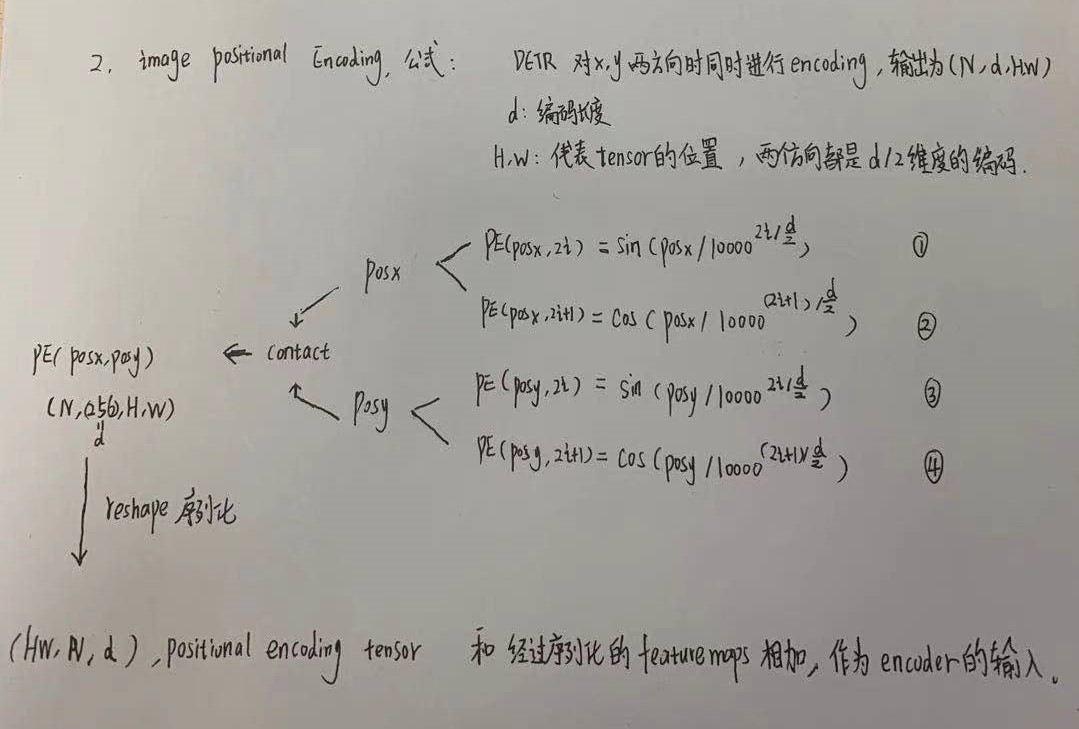 Firstly, 1x1 convolution reduces the channel dimension of higher-order characteristic graph f from C to a smaller dimension D. Since the transformer requires a sequence to be input, each channel of this feature is pulled into a vector to become the size of d X WH. Because this transformer has permutation invariance (the order of input has no effect on the result, so there is no location information directly), it needs to supplement the fixed location code as the input. Each encoder layer is composed of multi head self attention module and FFN. Each input will output a d-dimensional feature vector through the encoder.
Under the "multi head" attention mechanism, we maintain an independent query / key / value weight matrix for each head. We only need eight different weight matrix operations, and we will get eight different Z matrices
The left and right side of the encoder is only to serve the decoder. The input features are self attention weighted mapped. If there is a better backbone network, it can not be encoded at all 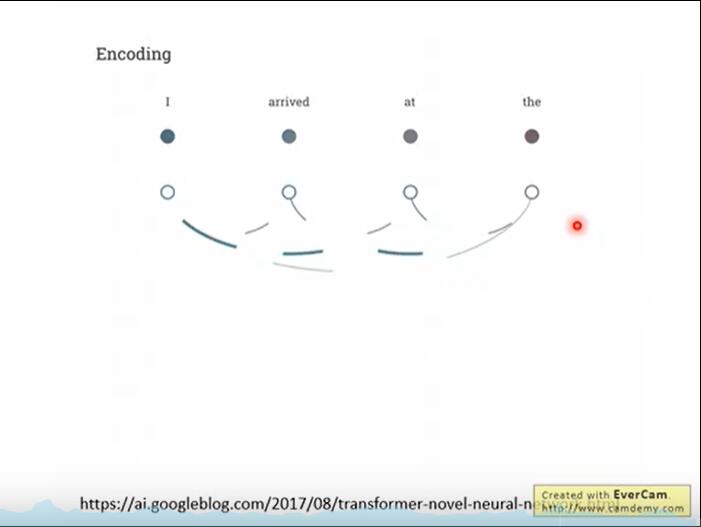 The input of encoder is: src, mask, pos_embed

The output of the first five times is src for the next training. The output of the last time in the group is memory. Yo, about passing to the decoder, the two are the same, but the names are different

Similar to the coding principle, it is to add the attention of coding decoding. Decoding is the key of Transformer. The front pile can be regarded as feature extraction. Decoding is to output the predicted category and regression coordinates.

His input is n object queries. After the self attention mechanism, it is mixed with the decoded output to encode and decode self attention. Then, through the feedforward network, they are independently decoded into frame coordinates and class labels, so as to generate N final predictions. Using self attention and encoding decoding attention to these embedded concerns, the model globally uses the pairwise relationship between all objects, and can use the whole image as context information
Input: memory: This is the output of the encoder. Size = [56,2256]
Mask: it's still the mask above
pos_embed: or the POS above_ embed
query_embed: randomly generated audience attention, size = [100,2256]
tgt: the input of the decoder of each layer. The first layer is equal to 0

This sentence is used to generate audience attention

num_embeddings (python:int) – the size of the dictionary. For example, if there are 5000 words in total, enter 5000. At this time, the index is (0-4999)
embedding_dim (python:int) – the dimension of the embedded vector, that is, how many dimensions are used to represent a symbol.
padding_idx (python:int, optional) – fill in the id, for example, the input length is 100, but the sentence length is different every time. Later, it needs to be filled with a unified number, and this number is specified here. In this way, when the network encounters the filled id, its correlation with other symbols will not be calculated. (initialized to 0)
max_norm (python:float, optional) – the maximum norm. If the norm of the embedded vector exceeds this limit, it must be re normalized.
norm_type (python:float, optional) – specifies what norm is used to calculate and is used to compare max_norm, the default is 2 norm.
scale_grad_by_freq (boolean, optional) – scale the gradient according to the frequency of words in mini batch. The default is False
sparse (bool, optional) – if True, the gradient associated with the weight matrix is transformed into a sparse tensor 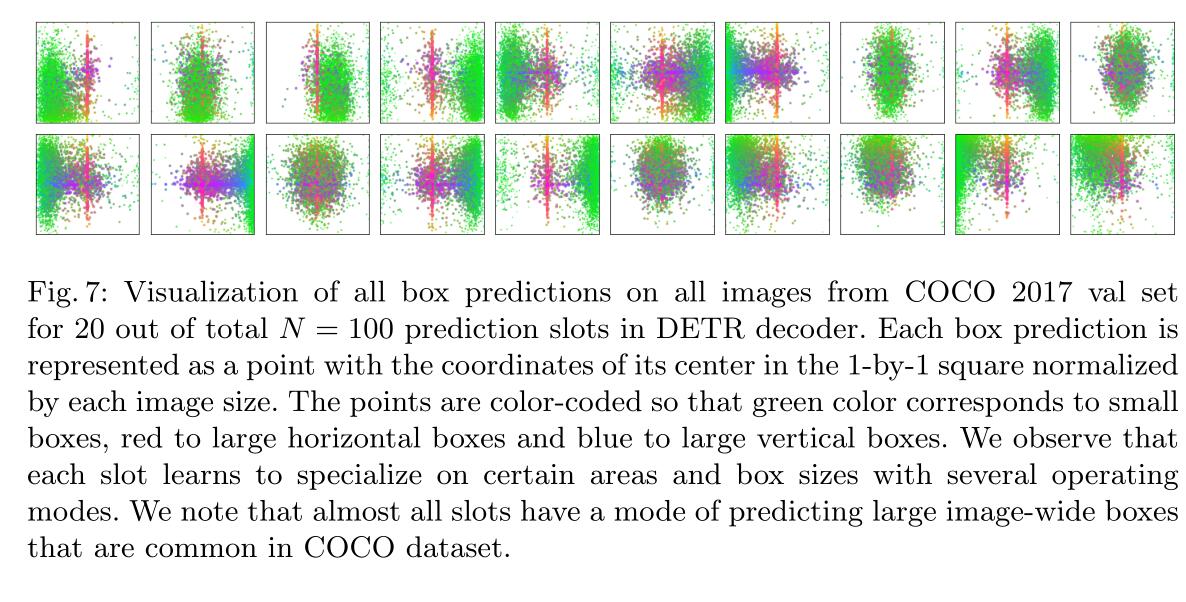 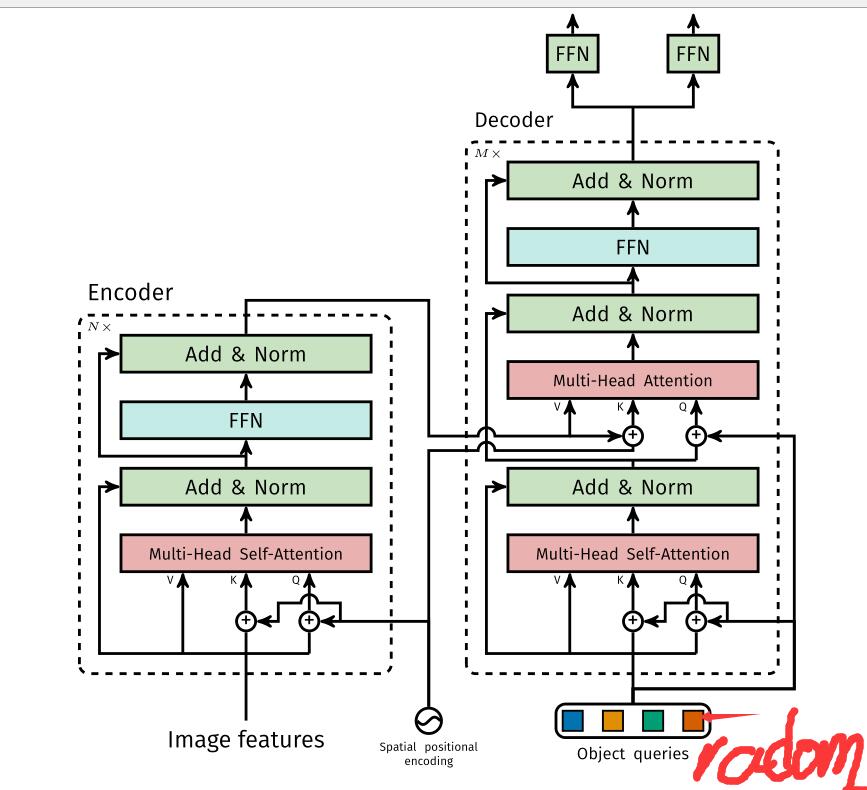 Due to the special structure of DETR, the loss function should be reconstructed. The predicted number of images in den is usually more than the actual number of output images in 100. The main difficulty of prediction is to give a score to the output target (including category, location and size).
Y represents the set of N predictions. Since n is much larger than the number of targets in the figure, y should be used as ∅ pad. In order to find one with the least loss for N Y and N Y, it becomes the maximum matching problem of a bipartite graph, so the weighted Hungarian algorithm (km algorithm) can be used: recursively find a set of pairwise matching order with the least loss, and the key is to find the augmenting path – assuming that there is a matching result and there is a set of unmatched fixed points, The ability to find a path on which matching and unmatched fixed points appear alternately is called augmented path.
ps: the approximate optimal solution can also be obtained by greedy algorithm, and the amount of calculation is relatively small 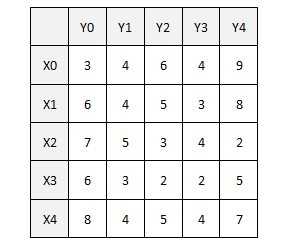 In this way, the iou of gt and region proposal are calculated, and the non maximum suppression is no longer used to reduce the generation of region proposal, and the labor cost is reduced. The meaning of the following formula: find the pair with the smallest loss in the matching of Y and y, and finally find the minimum loss of all global pairs

The loss function is a linear combination of category loss and box loss, with class loss on the left and box loss on the right.
Let's start with the loss: σ Pull out is in the case of optimal matching, p σ Is the probability at this time, and then take it as the index and take 10 as the base to calculate the cross entropy loss of logarithm (c is the real probability and p is the prediction probability). Since the category c in a picture must be less than n (n=100), c may be an empty set. When c is an empty set, reduce the log probability weight by 10 times to solve the imbalance between positive and negative samples.

The later bbox specific loss is the combination of L1 loss and IOU loss. If L1loss is used directly, loss is very sensitive to the size of the target, and the weight blue is not large. It is a super parameter, which should be set manually