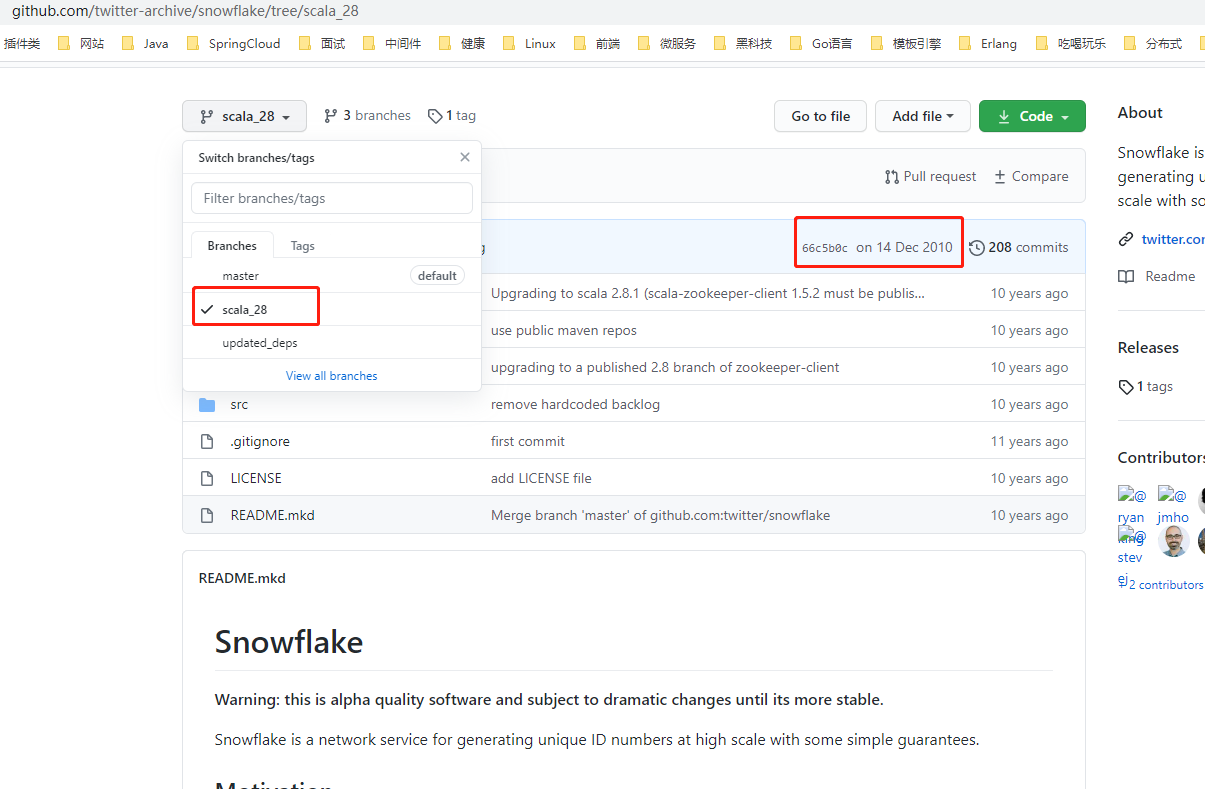 The above figure shows Snowflake's Github warehouse. The REAEMDE file in the master branch indicates that the initial version was released in 2010, based on Apache Thrift, earlier than Finagle (here Finagle is the building module for RPC services on twitter), and Snowflake used internally on Twitter is a completely rewritten program, It relies heavily on the existing infrastructure on Twitter to run.

The source code of the first version of Snowflake released in 2010 is written in Scala and archived in scala_28 branch. In other words, the original or improved version of Snowflake algorithm currently used by everyone is the product of ten years ago (currently 2020). I have to say that this algorithm is really powerful. Scala_ The motivation and requirements of the algorithm are introduced in branch 28. Here is a brief excerpt:

There is no tool for generating sequential IDS in Cassandra. Twitter needs a new way to generate IDS when it changes from using MySQL to using Cassandra (which proves that the architecture is not designed, but iterated based on business scenarios).

The design scheme of Snowflake in the first edition is:

However, in the actual source code implementation, Snowflake divides the 10 bit configurable machine ID into 5-bit Worker ID (which can be understood as the original machine ID) and 5-bit Data Center ID (Data Center ID). See idworker for details scala: 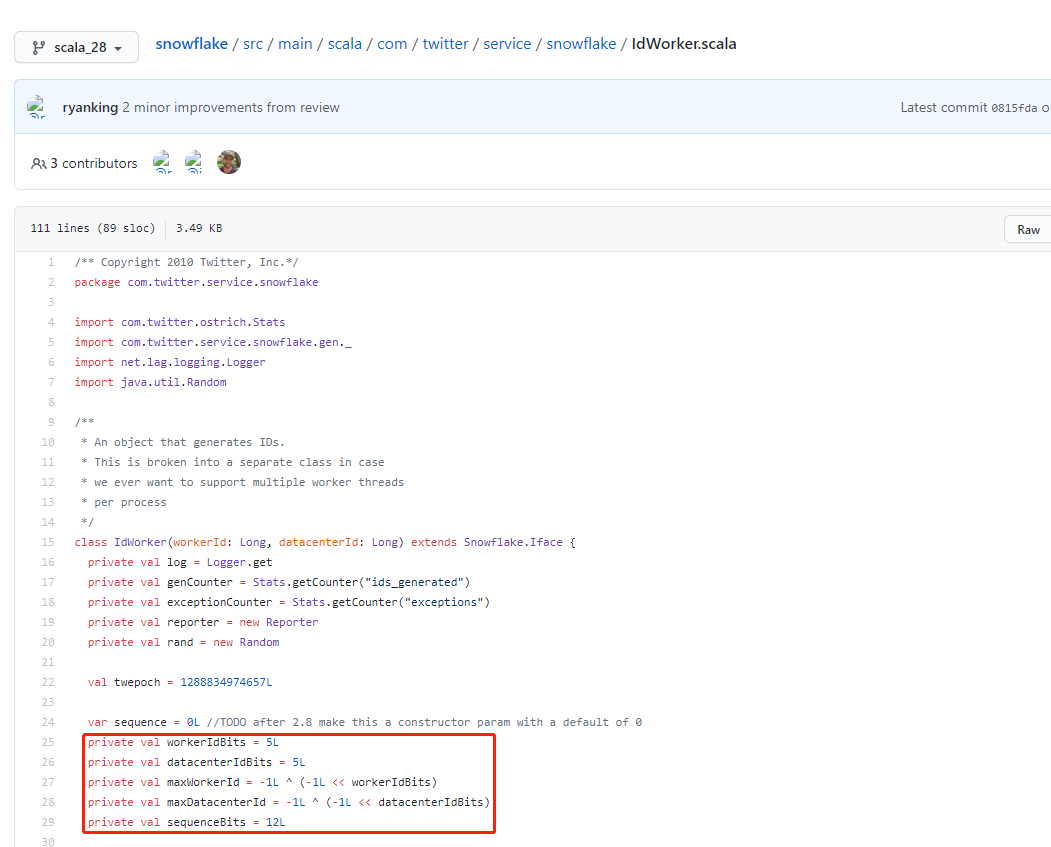 That is, up to 32 machine IDs and up to 32 data center IDS can be configured:

Since the algorithm is written in Scala language and depends on the JVM language, the returned ID value is a Long type, that is, a 64 bit integer. In the original algorithm generation sequence, only the length of 63 bit s is used, and the unsigned number is to be returned. Therefore, add a 0 in the high bit (occupying 1 bit), and the total ID length is 64 bits:

Snowflake algorithm also has an obvious feature: it depends on the system clock. The 41 bit length millisecond level time comes from the system time stamp, so it must be ensured that the system time is progressive and clock callback cannot occur (generally speaking, multiple identical time stamps or past time stamps cannot be generated at the same time). In case of clock callback, snowflake will refuse to generate the next ID.

Snowflake algorithm uses a lot of bit operations. Since the complement of integers is the storage form in the computer, integers in Java or Scala are represented by complement. Here, I will mention the knowledge of original code and complement.

When using the original code and inverse code, the calculation result is not necessarily accurate, but when using the complement code, the calculation result is correct. Just remember this conclusion. There are no ex amp les here. In Snowflake's ID generation scheme, except for the highest bit, the other four parts are unsigned integers. Therefore, the efficiency of bit operation using complement for integers of four parts will be relatively high. Only in this way can we meet the original intention of Snowflake's high-performance design. Several bit operations are used in Snowflake algorithm: XOR (^), bitwise and (&), bitwise OR (|) and signed left shift (< <).

Here's the last one:

The operator with a signed left shift is < <, and the general format is: m < < n. The functions are as follows:

The deduction process is as follows (assuming n = 2):

You can write a main method to verify:

Using the three bit operators mentioned above, we can realize some efficient calculation schemes by combining them with each other.

Calculate the maximum value that n bit s can represent:

There is such code in Snowflake algorithm:

The operator here is - 1L ^ (- 1L < < 5L). Sort out the order of operators, and then deduce using 64 bit binary numbers. The calculation process is as follows:

Use the maximum value of fixed positioning as the Mask to avoid overflow:

There is such code in Snowflake algorithm:

Finally, the operator is actually sequence = (sequence + 1) & 4095. Assuming that the current value of sequence is 4095, the calculation process is deduced as follows:

You can write a main method to verify:

Although Snowflake is written in Scala, its syntax is actually similar to that of Java. Just read it as Java code. When reading the code below, you will skip some logic of logging and measurement statistics. Let's look at idworker Scala attribute value:

Then look at the core code logic of the algorithm:

There are many bit operations in the last paragraph of logic, but if you skillfully use bit operators, the logic is not complex. Here you can draw a diagram to deduce: 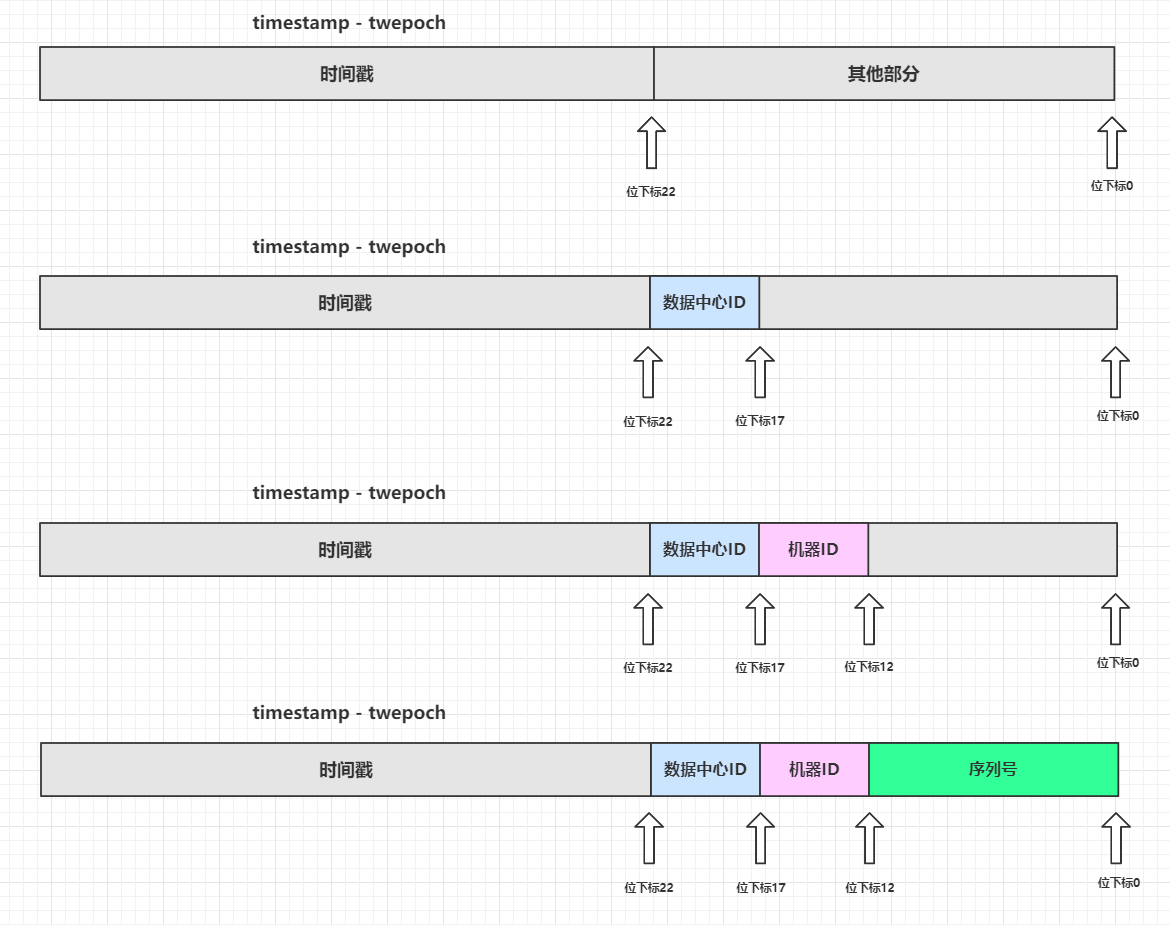 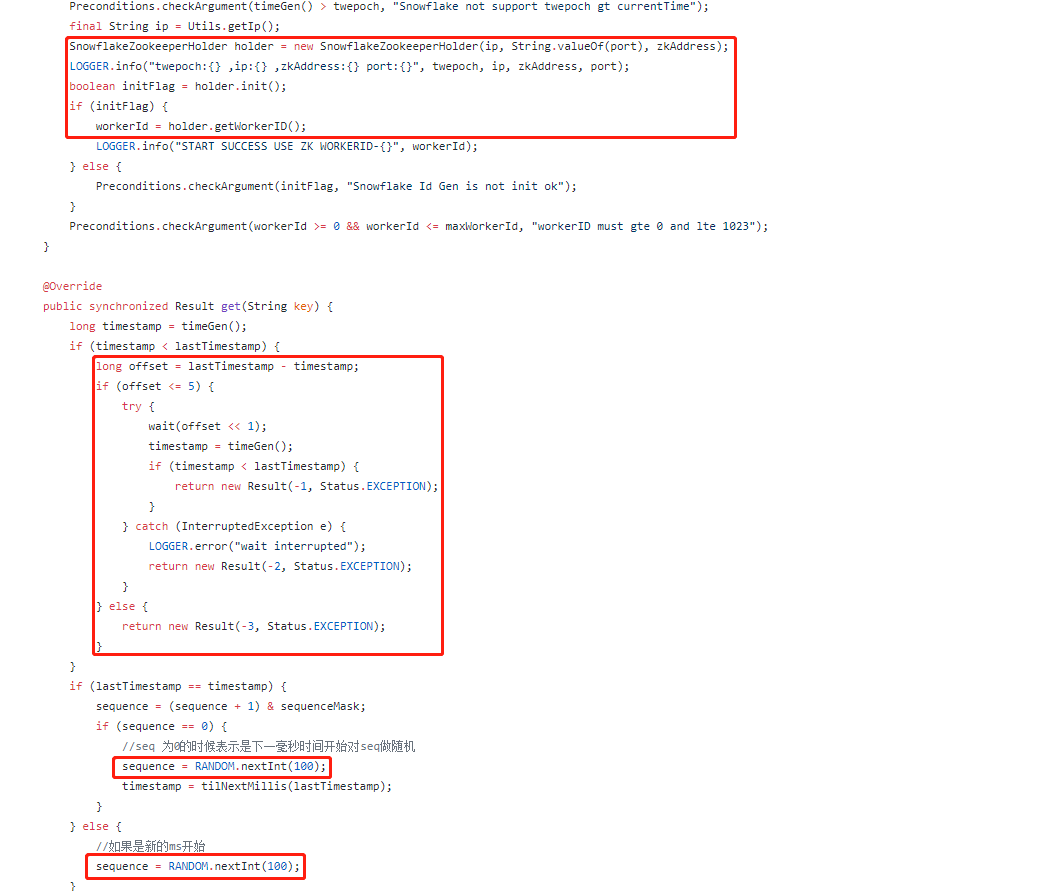 The corresponding solution is (without in-depth source code analysis, you can read the source code of the following Leaf if you are interested): 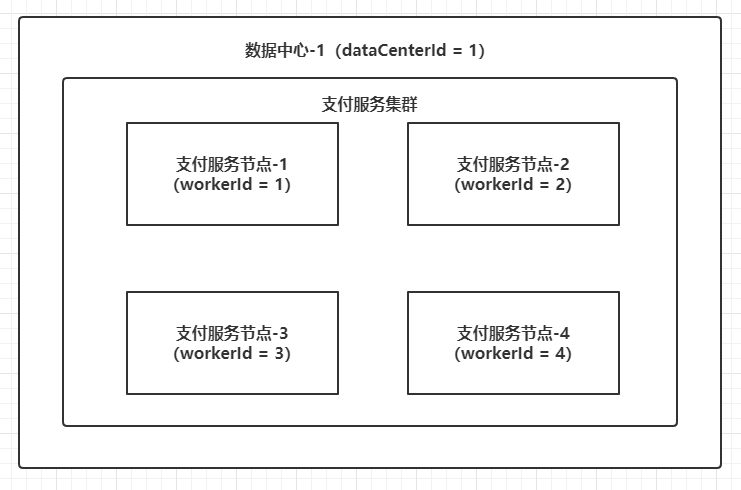 There are many ways to manage these two IDS, or an open source framework such as Leaf introduces distributed cache for management. Another example is that the entrepreneurial team where the author works has few production services. The Woker ID and Data Center ID are directly hard coded in the service startup script, and then the Woker ID and Data Center ID used by all services are uniformly registered in the team's internal knowledge base.

If you don't consider the performance at all, clock callback, serial number generation, etc., you can actually remove all the bit operations and exception handling of Snowflake and use Long Tobinarystring() method combines strings to splice 64 bit binary numbers according to the idea of Snowflake algorithm, and then through Long The parselong() method is converted to a Long type. Write a main method as follows:

Although the writing method of string splicing is inefficient, it will be highly readable. The engineering processed code can directly specify the equivalent of Worker ID and Data Center ID during instantiation. Moreover, this simple Snowflake implementation does not depend on a third-party library, and can be run directly after copying. The above method uses string splicing, which looks low-end. In fact, the bitwise or of the last part can be completely converted into addition:

In this way, it seems that the whole algorithm becomes simple, but it involves exponential operation and addition operation, and the efficiency will be relatively low.

Snowflake algorithm is an algorithm with high performance as the core goal. Based on this purpose, it skillfully uses a large number of bit operations. This article has thoroughly analyzed the bit operations and specific source code implementation applied in snowflake. Finally, based on the official snowflake algorithm source code of Twitter, a Java implementation version is revised, and the improved method mentioned above is applied to fix the problem that only even numbers occur in low concurrency scenarios. It has been applied to the production environment for a period of time. The code warehouse is as follows (the code is not dependent on any third-party library, and can be directly used after being copied):