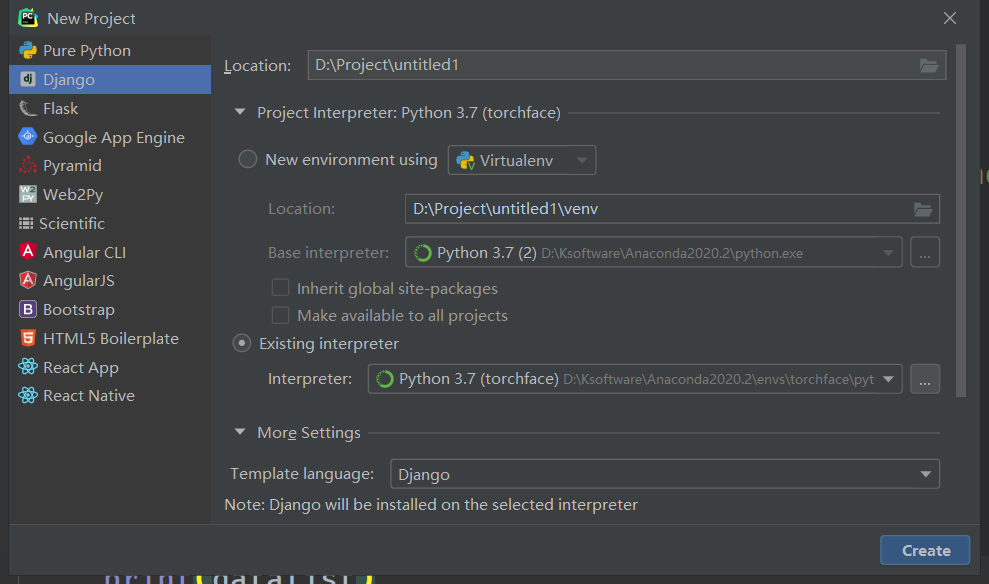 At the end of the Location is the Django project name, and select the virtual environment

In More Setting, you can select the template language and enter the APP name in Application name. If you do not enter the APP name, the new project does not contain APP by default. After the project is completed, you can use the command Python manage py startapp my_app new APP, my_app is the APP name

The following figure shows the directory structure of my new project, where discipline_inspection is the project name of the new project in Figure 1, which contains several files in the figure. Among them, settings are some configurations, url is the routing address, and the remaining two are not used for the time being. 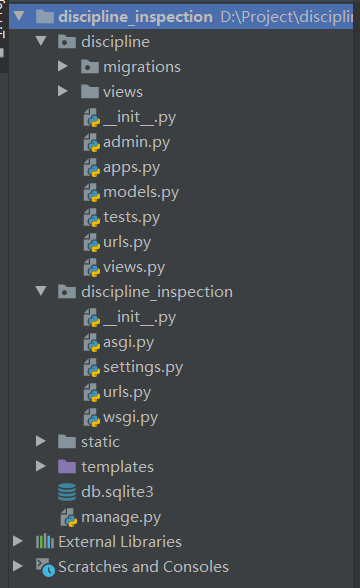 discipline is APP, and some database migration files are stored in migration. Views is a new folder created by me. In order to facilitate post coding classification, don't worry. urls is a new file used to store secondary routes, mainly using models Py and views Py, the former is used to build the database model, and the latter is used to write functional code.
Static and templates are copied from dattable project. In order to use its styles and templates, static stores static resources.

Each class represents a table in the database. The class name is the table name. The above figure is the example code. charfield represents varchar field, integerfield represents int field and foreignkey represents foreign key. For details, you can check some Chinese documents, which will not be repeated here.

Install the database plug-in in pycharm to view the contents of the data table. I forgot what plug-in is. Baidu. As shown in the figure 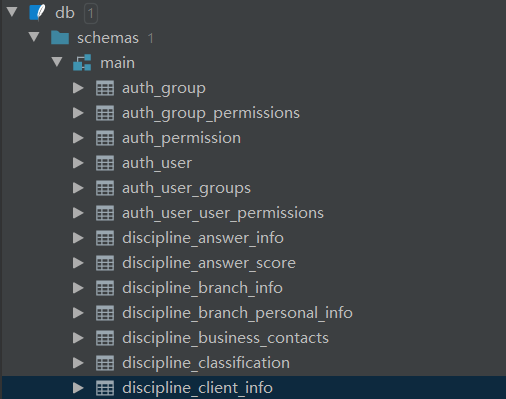 In settings Py requires some configuration, including allowed_hosts is the allowed access address. localhost is filled in by default when testing here
installed_apps include apps. If the APP name is filled in when creating a new APP, it does not need to be registered here (if it is registered, an error will be reported and the APP will be repeated). If there is a later APP, the APP name needs to be added after it. 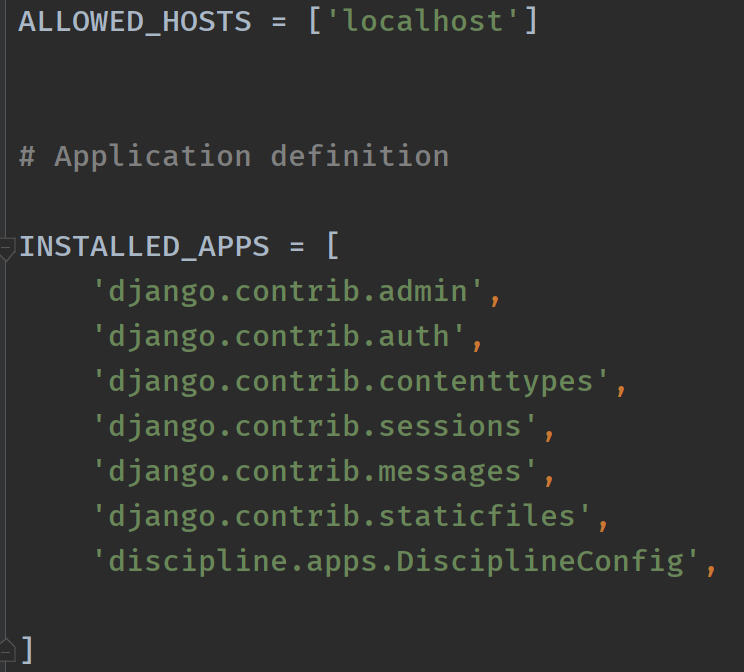 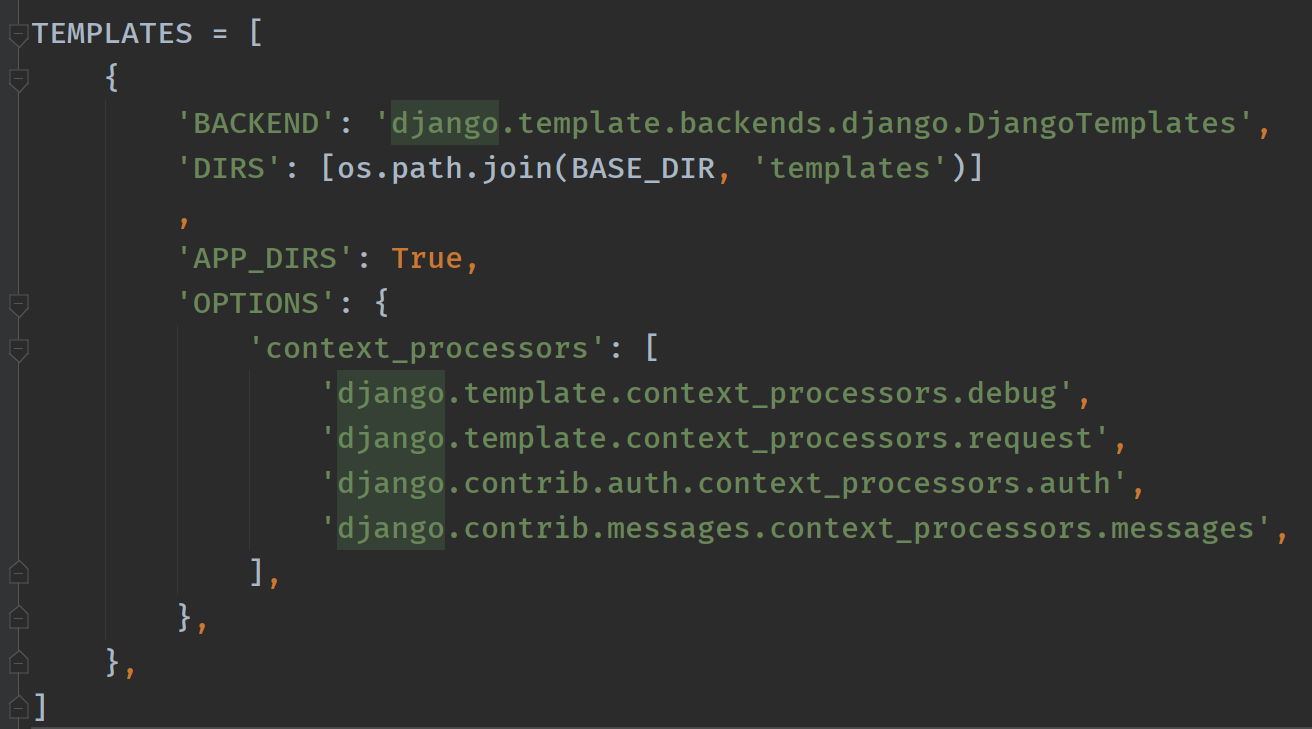 The following figure shows the configuration database. Since Django's default sqlite3 database is used during the test, there is no change here. If you need to replace the MySQL database later, you can directly configure it here. 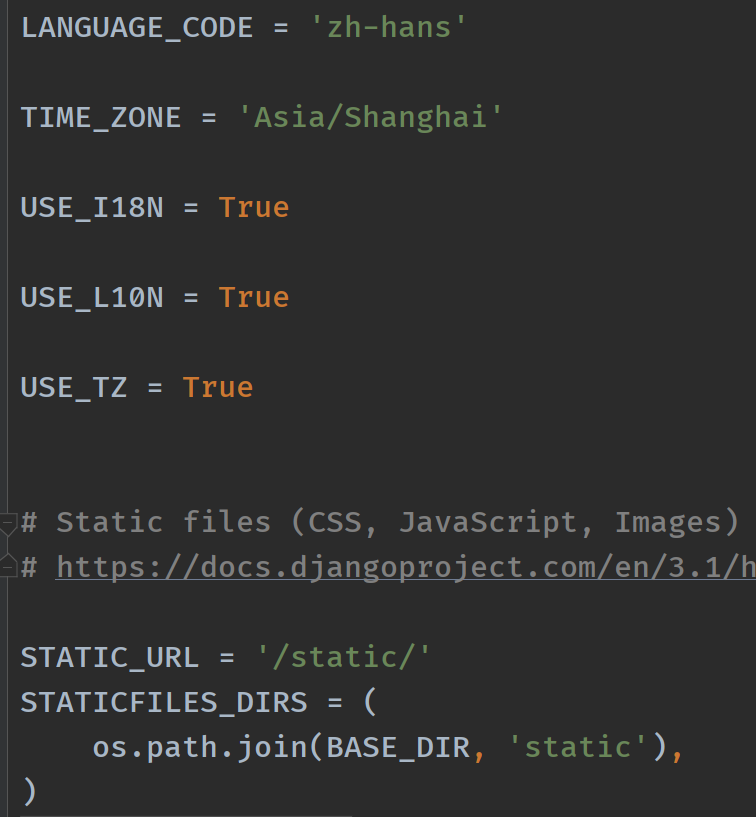 The default urls route configuration is under the project name folder, which is the primary route, and the commented statements are the default statements. In order to facilitate management, the secondary route is generally used here. The configuration in this file is the primary route. If the project contains multiple apps, you only need to use the include method to point to each APP path here.

The following figure shows the configuration of secondary routing. Create URLs under the APP folder Py file, in which code in the following format is written, app_name is the APP name, so that the reverse parsing url can be written in app:urlname format on the template side or during redirection, which will be mentioned later.

Configure paths in urlpatterns, which respectively point to the names of methods in views. The example code is shown in the figure, which contains three parameters,

Take the home page as an example, define the method named index, which corresponds to the second parameter in urls, receive the request sent by the front end, write the function to be realized and the value to be passed in the method, and finally render returns a page and renders the value in the page. The render method returns three parameters, namely (request, url, context) the page whose url is the orientation, and the context is the json string that needs to be passed to the front-end template. This method mainly transfers' datalist 'data to the front end (the writing method of a blogger I refer to here is different from the standard writing method. You can check the specific usage of render function on Baidu.)

The specific database orm operation of Django can be Baidu. Just use it and check it now. Here is a reference link Liu Jiang's Django tutorial I think this one is quite easy to understand.

The figure below shows Datta-Able The templates directory structure of the template. 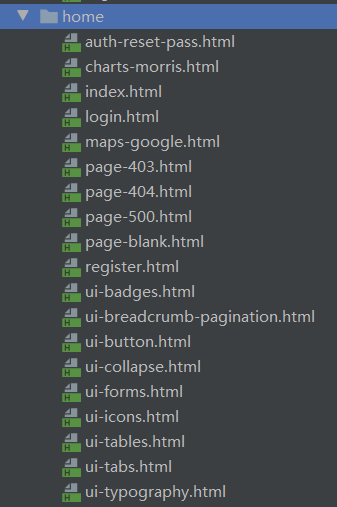 8. Introduction to each page of Datta able template

Datta able is written in some styles of bootstrap 4. The following figure shows the base. In the layouts folder HTML page, which is one of the master pages of the entire template, and other pages can inherit this page.

The following figure shows the contents in the body of the page. You can see that the include in the page includes the sidebar under the includes folder HTML, sidebar is the navigation bar, and the master page embeds it in the page. {% include%} is a Django template language. You can learn some basics from the tutorial. For others, just check them now. 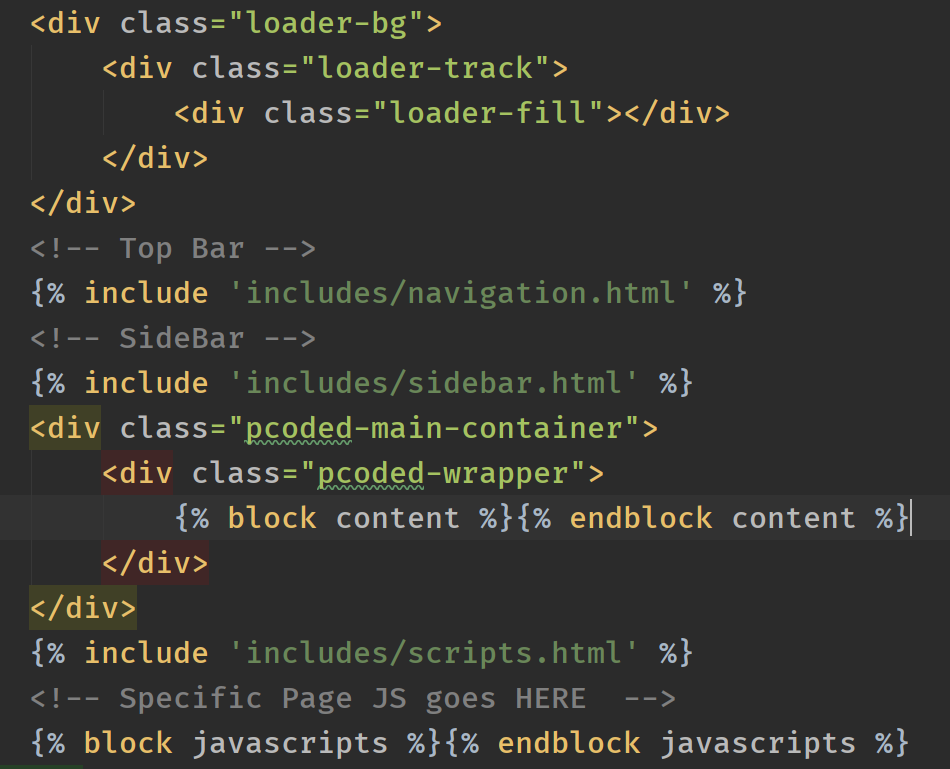 The following figure is my simple modified homepage index HTML, you can see that the page directly inherits from layouts / base html. {% block%} {% endblock%} is a changeable module. In the base home page, the place containing the block tag can be changed. If you want to inherit the navigation bar of the parent page, but want to write some content yourself, you can directly add the content of your own page to the corresponding block content of the parent page. 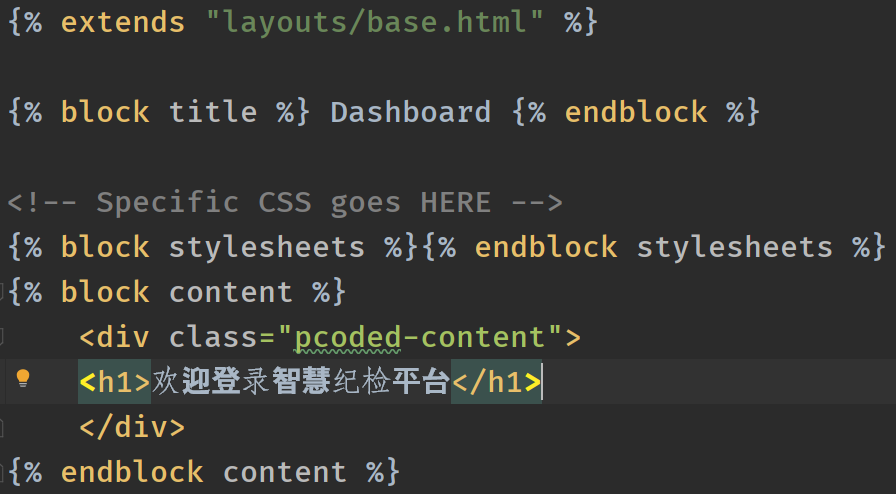 Each time a new page is created, it directly inherits base HTML, just write the content you need in the content block.

The following code is for include / sidebar HTML modification, in order to make the navigation bar meet our needs.

In the login page, you need to submit the login user's form and use the form tab to write the form content. The submission method is POST. {% csrf_token%} this tag is Django's form protection mechanism. You need to add this tag after the < form > tag to run normally, but I don't know why I added it or reported an error here, so I took another solution, adding @ CSRF before the method in views_ Exempt ID. However, the two methods cannot be used at the same time, and an error will be reported.

1. Create a new template page that needs to be written. Here, you can directly use index. Under home HTML page as an example.

Create a new page and write the template content. The following is index HTML sample code. You can see here that it inherits layout / base HTML page, what we need to do is to dynamically render the side navigation bar on the home page, which is embedded in base HTML page, so the reference is in include / sidebar HTML navigation bar page.

2. Write functions in the view layer

You can write function functions in views under APP and pass parameters to the front end. In the index method in 6, query the desired information according to the database operation, assign it to the context, pass the context to the front end through render, and return the html page path.

3. Configure the route in the url, see 5