The website deployed by oneself still has a small sense of achievement. After all, it has stepped on many pits, and its actual combat skills have made some progress. 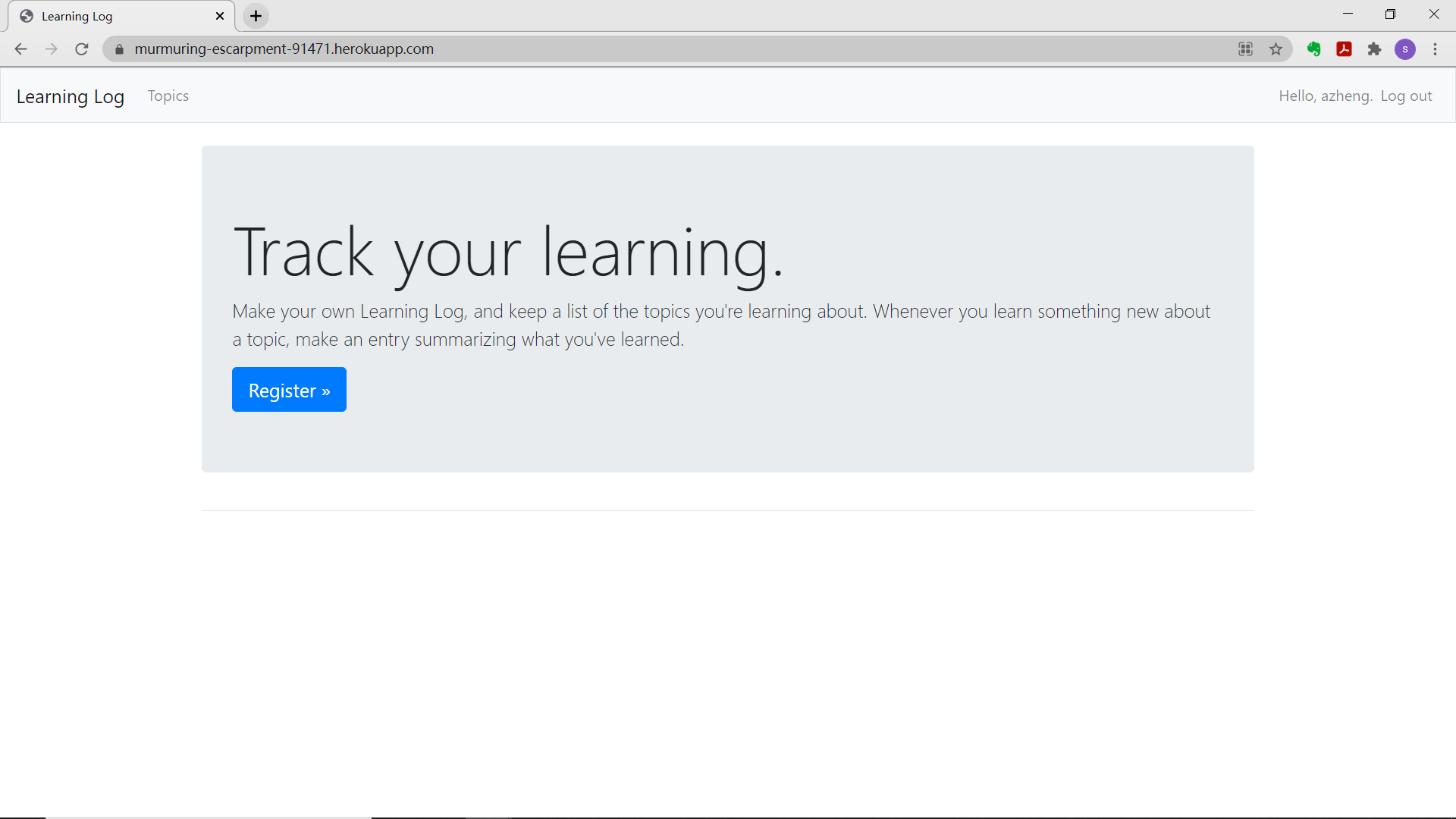 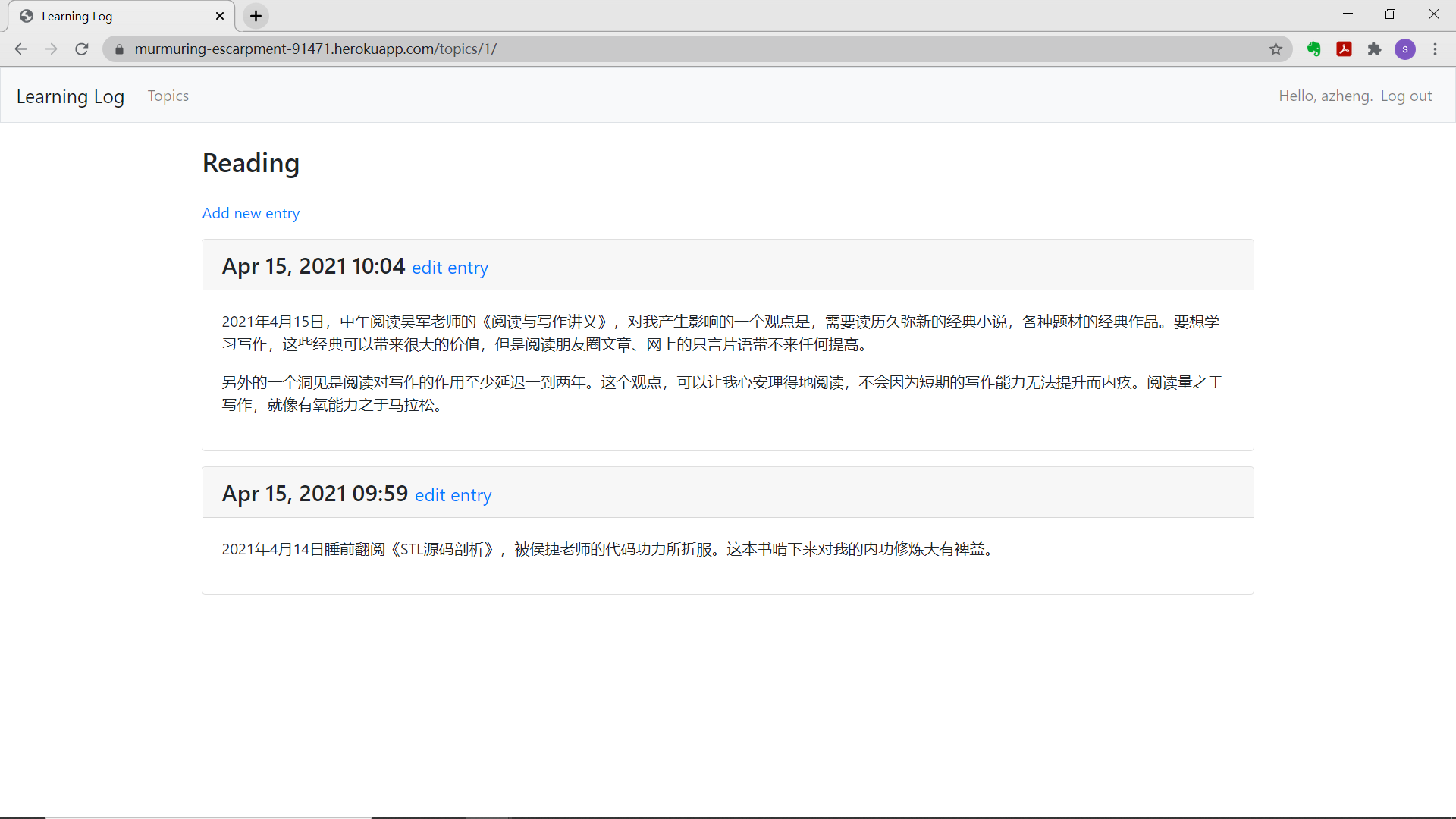 To use Django, you first need to establish a virtual working environment. A virtual environment is a location on the system where packages can be installed and isolated from other Python packages.

Create a new directory for the project and name it learning_log, then switch to this directory in the terminal, and execute the following command to create a virtual environment

Here you run the module venv and use it to create a file called ll_env virtual environment.

If you are using a Windows system, use the command

To stop using the virtual environment, execute the command

After activating the virtual environment, execute the following command to install Django:

Create a new project in Django

When the virtual environment is still active (ll_env contained in parentheses), execute the following command to create a new project

Directory learning_log contains four files, the most important of which is settings py,urls.py and WSGI py.

The Django project consists of a series of applications that work together to make the project a whole.

The model tells Django how to handle the data stored in the application. At the code level, the model is a class, just like each class discussed above, including attributes and methods.

To use these models, you must have Django include the aforementioned application in the project. To do this, open settings Py (which is located in the directory learning_log/learning_log), in which a fragment tells Django which applications have been installed into the project and will work together.

When you need to modify the data managed by "learning notes", you should take the following three steps: modify models Py, yes, learning_logs calls makemigrations and Django migrates the project.

Create page
The process of creating pages using Django is divided into three stages: defining URLs, writing views, and writing templates. The order in which these three phases are completed is irrelevant, but in this project, the URL pattern is always defined first.

To indicate which URLs are currently located Py file, add a document string at the beginning of the file. Next, the function path is imported because you need to use it to map the URL to the view. We also imported the module views, in which the period allows Python to start from the current URLs Import views. From the folder where the PY module is located py. Variable app_name enables Django to convert this URLs Py files are distinguished from files with the same name in other applications within the project. In this module, the variable urlpatterns is a list that can be used in application learning_ Page requested in logs.

The actual URL pattern is a call to the function path(), which accepts three arguments. The first is a string that helps Django route requests correctly. After receiving the requested URL, Django tries to route the request to a view. To do this, it searches all URL patterns and finds the one that matches the current request. Django ignores the underlying URL of the project( http://localhost:8000/ )Therefore, the empty string ('') matches the underlying URL. Other URLs do not match this pattern. If the requested URL does not match any of the existing URL patterns, Django will return an error page.

The second argument to path() specifies to call view Which function in py. When the requested URL matches the above regular expression, Django will call view The function index() in py. The third argument specifies the name of the URL pattern as index, allowing us to refer to it elsewhere in the code. Whenever you need to provide a link to this home page, you will use this name instead of writing a URL.

Some results of Chapter 19 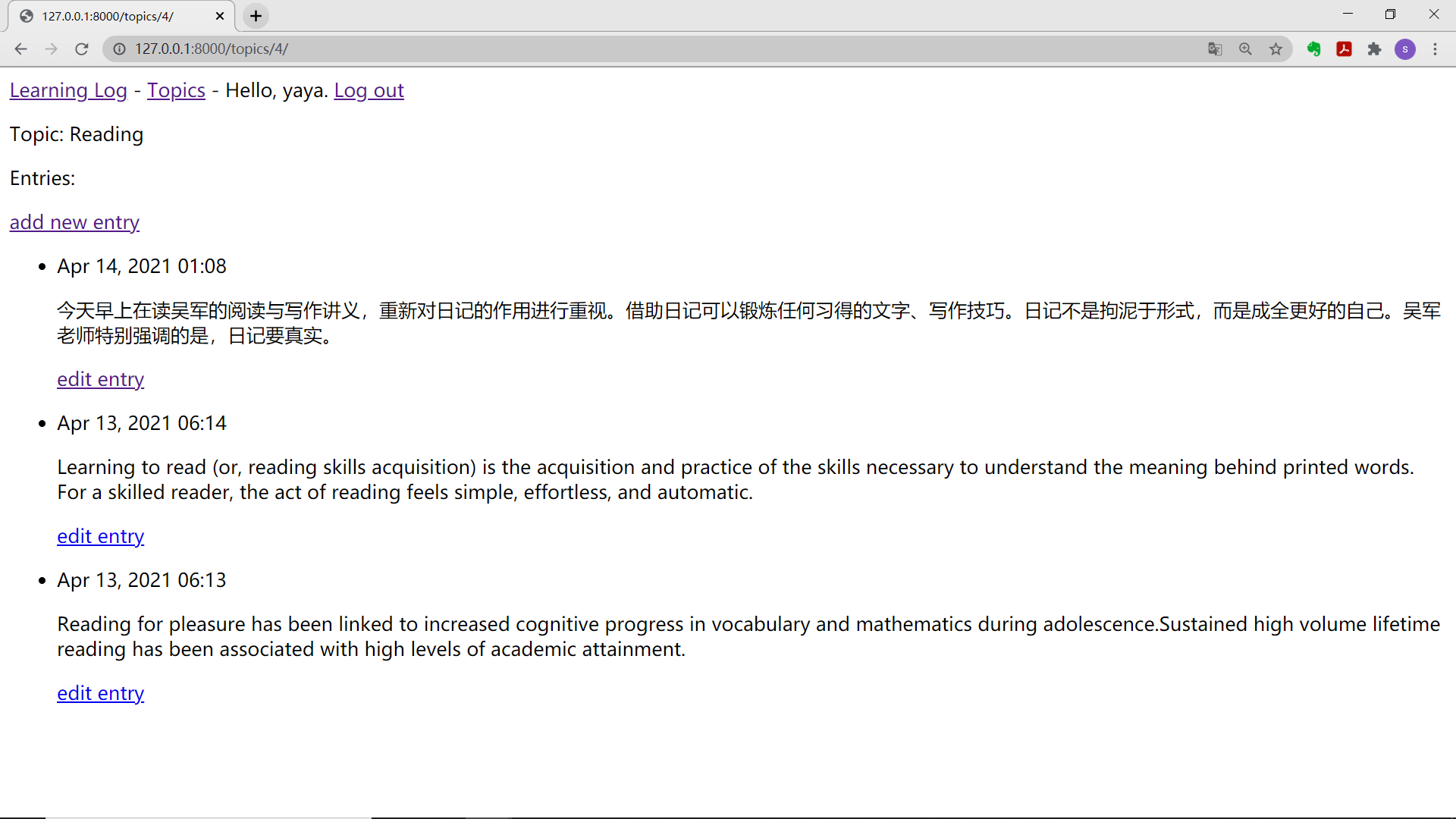 Let users have their own data

Django provides the decorator @ login_required, which allows you to easily allow only logged in users to access certain pages. Decorator is an instruction placed in front of the function definition. Python modifies the behavior of the function code according to it before the function runs. 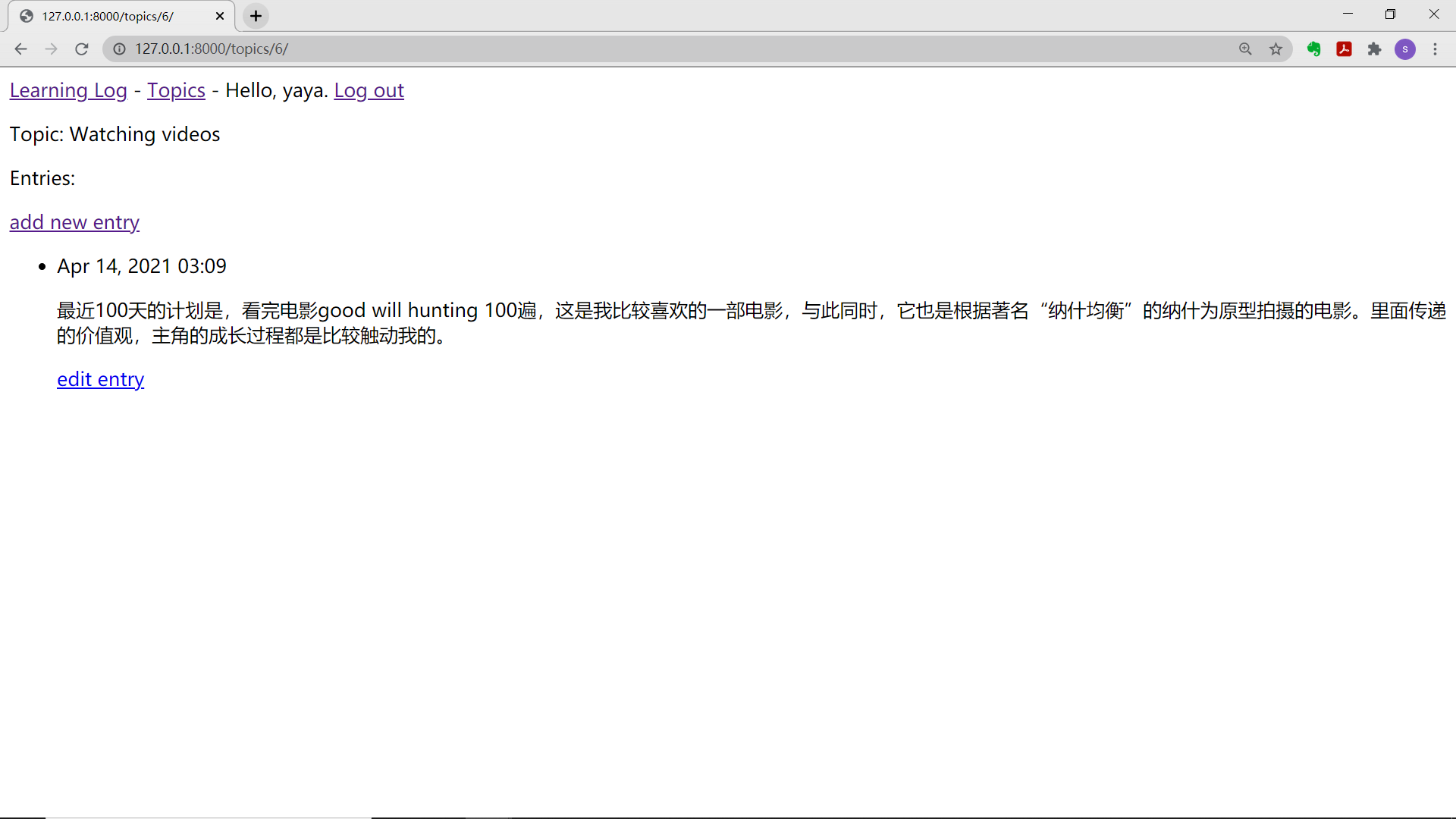 Here is "python programming from introduction to practice (Second Edition)"

Note: when I first started git push heroku master, I always reported an error because heroku in a file was written as herocu, for example:

After modification, use the command git commit -am "a paragraph" to commit again.
Then execute git push heroku master and the project will be deployed.

To verify that the server process is started correctly, execute the command heroku ps:

The output indicates how long the project can be active in the next month [1]. At the time of writing this book, Heroku allowed free deployment and was active for up to 550 hours a month. After the activity time of the project exceeds this limit, the standard server error page will be displayed, which will be customized later. At [2], we found that the process specified by Procfile was started.

What about Ip mismatch in heroku login, Terminate with Ctrl+C and then output 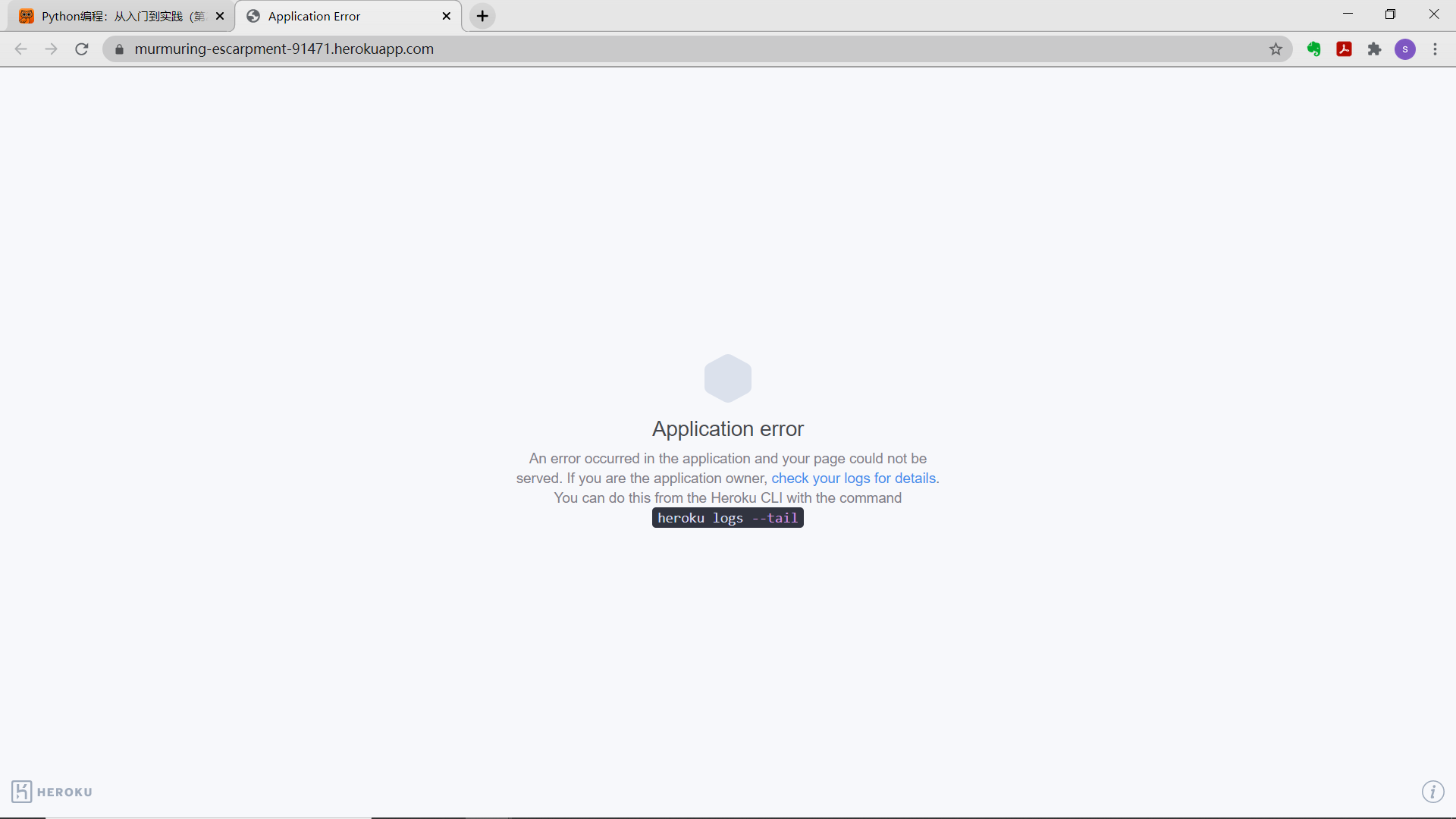 resolvent:
Enter heroku logs --tail
Then find the error: learning is not found_ logs. WSGI, sure enough, this is the author's mistake, and the correct one should be learning_log.wsgi, write s more, modify the Procfile file, and then resubmit.

Then redeploy to heroku

Then continue to execute: heroku open 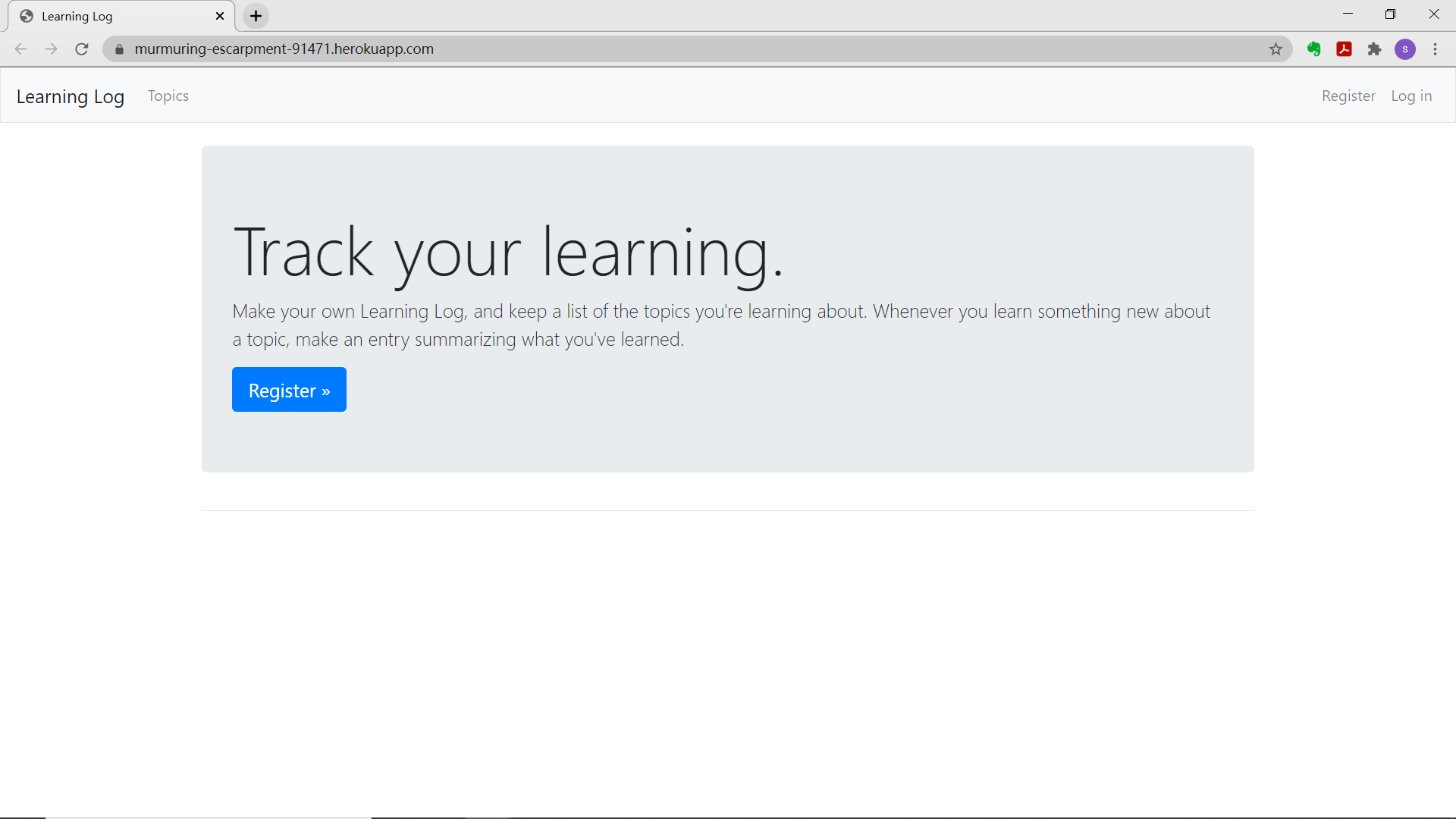 If you access the deployed application, you will be able to use it as on the local system, but you can't see any data entered in the local deployment (including super user accounts) because they haven't been copied to the online server. Typically, local data is not replicated to online deployments, as local data is usually test data.

You can share the Heroku URL of the learning notes so that anyone can use it.

At present, the url address of the self built web page is: https://murmuring-escarpment-91471.herokuapp.com/
Then he registered the user and wrote his own Learning Log.