The overall command structure can be illustrated with such a diagram. Each instruction will be described later. 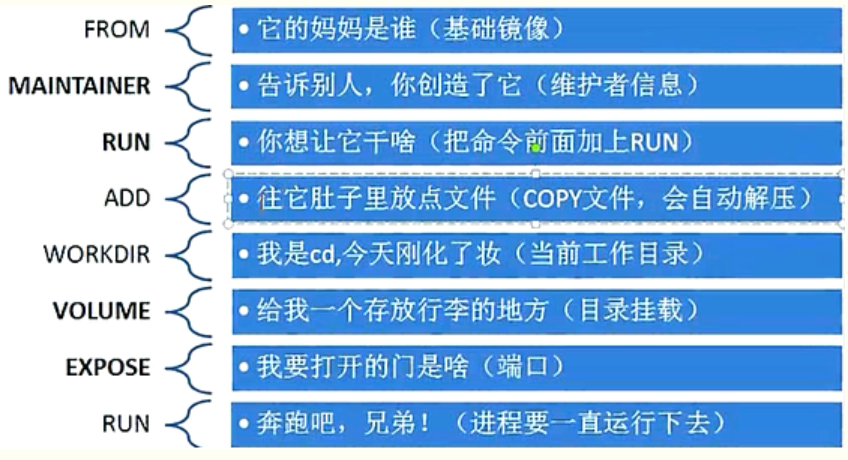 The FROM instruction specifies that the basic image must be the first command.

digest is equivalent to a hash value. When you pull the image, you can take it with you to prevent the image from being maliciously tampered with

The RUN instruction describes the commands that need to be RUN during the construction of the image.

Set the working directory of the mirror

Commands to run after starting the container

Specify the commands to be executed when the container starts

This is very similar to CMD, but it is different. Only the last CMD instruction will take effect, while the commands in the ENTRYPOINT instruction can be superimposed.

Add commands here. When the current image is used as the basic image of other images, the instructions in it will be transferred and executed

Similar to add, copy the file to the image

Used to add image meta information to the image

There are not many basic commands that have been introduced earlier; Then use the above commands to build a centos as a test.
First, create a new file in the test machine for writing. The file path I use is / home/dockerfile.
ifconfig, clear and vim commands are added in the framework process. Use vim to edit the file. After editing, check the contents as follows. 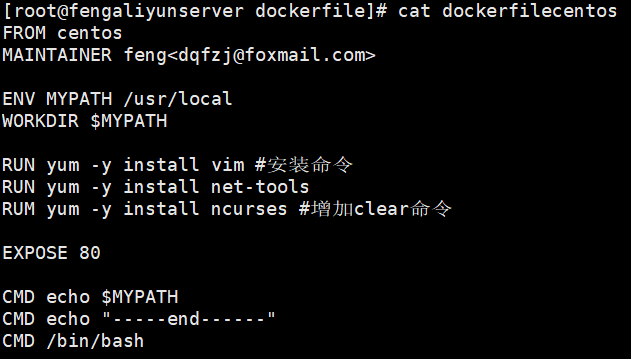 The command to build an image is docker build. The syntax was introduced earlier. Here, the following code is used for construction:

After execution, skip directly to the end, showing success, indicating that the construction is completed.

It can be viewed in the system

The first mycentos here is the image just built

Test the built image. Compared with the original centos, it can be found that at this time, mycentos: 0.1 has the ability to execute vim, ifconfig and clear instructions.