SM1 and SM7 algorithms are not public. When calling the algorithm, it needs to be called through the interface of the encryption chip; Few people understand these algorithms. Here we make a simple introduction to these national secret algorithms

Using this algorithm, a series of chips, smart IC cards, smart password keys, encryption cards, encryption machines and other security products have been developed, which are widely used in various application fields of e-government, e-commerce and national economy (including important fields such as national government communication and police communication).

SM2 algorithm is ECC elliptic curve cryptography mechanism, but it is different from ECDSA, ECDH and other international standards in signature and key exchange, but adopts a more secure mechanism. In addition, SM2 recommends a 256 bit curve as the standard curve.
SM2 standard includes four parts: general, digital signature algorithm, key exchange protocol and public key encryption algorithm. The implementation details and examples are described in detail in the appendix of each part.

SM2 algorithm mainly considers elliptic curves on prime fields Fp and F2m, and introduces the representation and operation of these two kinds of fields, as well as the representation, operation and multiple point calculation algorithms of elliptic curves on fields. Then it introduces the data conversion in the programming language, including the data conversion rules between integer and byte string, byte string and bit string, domain element and bit string, domain element and integer, point and byte string. 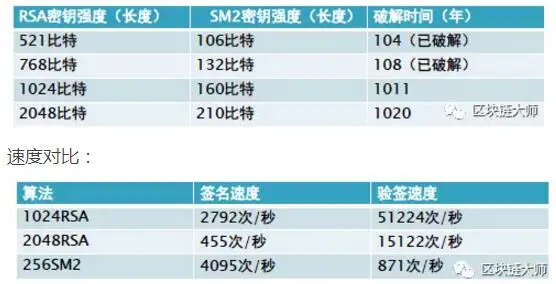 This algorithm generates a hash value with a length of 256 bits for a 64th power bit message with an input length of less than 2 through filling and iterative compression. XOR, modulus, modulus addition, shift, and, or, non operation are used, which is composed of filling, iterative process, message expansion and compression functions. See SM3 standard for specific algorithms and operation examples.

SM3 cipher digest algorithm is the Chinese commercial cipher hash algorithm standard published by China National cipher administration in 2010. SM3 algorithm is suitable for digital signature and verification in commercial cryptographic applications. It is an improved algorithm based on SHA-256. SM3 algorithm adopts Merkle damgard structure. The message packet length is 512 bits and the summary value length is 256 bits.

So far, the security of SM3 algorithm is relatively high.

SM3 is mainly used for digital signature And verification Message authentication code Generation and verification, random number generation, etc., and their algorithms are disclosed. According to the State Password Administration, its security and efficiency are equivalent to SHA-256.

The purpose of International DES algorithm and domestic SM4 algorithm is to encrypt and protect the data in static storage and transmission channel. The main characteristics are as follows:

In order to reduce the complexity of key and certificate management in public key system, Adi Shamir, an Israeli scientist and one of the inventors of RSA algorithm, proposed the concept of identity based cryptography in 1984. The identification password takes the user's identification (such as e-mail address, mobile phone number, QQ number, etc.) as the public key and omits the process of exchanging digital certificates and public keys, making the security system easy to deploy and manage. It is very suitable for end-to-end offline secure communication, cloud data encryption, attribute based encryption and policy based encryption. In 2008, the identification cipher algorithm was officially awarded the commercial cipher algorithm model SM9 (commercial cipher No. 9 algorithm) by the state cipher administration, which laid a solid foundation for the application of identification cipher technology in China.

SM9 algorithm does not need to apply for digital certificate and is suitable for the security of various emerging applications of Internet applications. Such as password service based on cloud technology, e-mail security, intelligent terminal protection, Internet of things security, cloud storage security and so on. These security applications can use the mobile phone number or e-mail address as the public key to realize data encryption, identity authentication, call encryption, channel encryption and other security applications. They are easy to use and easy to deploy, thus opening the door to popularize cryptographic algorithms.

As a national strategic resource, cryptographic algorithm is more critical than ever in history. In the era of big data and cloud computing, key information is often obtained from massive data through data mining technology, so everyone's information protection is very important.

stay information safety In, there are many important applications that use cryptographic hash functions, such as digital signature ，Message authentication code.

SM3 digest algorithm corresponds to the popular hash algorithm MD5. The result is 32-bit bytes and can be converted into 64 bit hexadecimal characters

The picture comes from the Internet. If there is infringement, please contact me to delete it