(a∧¬b∧(¬(c∨d∨¬a)∨(b∧¬d)))∨(¬(¬(¬b∨a)∧c)∧d)(a∧¬b∧(¬(c∨d∨¬a)∨(b∧¬d)))∨(¬(¬(¬b∨a)∧c)∧d)(a\wedge\neg b\wedge(\neg(c\vee d\vee\neg a)\vee(b\wedge\neg d)))\vee(\neg(\neg(\neg b\vee a)\wedge c)\wedge d)
Is there a set of assignments to these variables (such as assigning all aaa and ddd to TrueTrue\mathrm{True}, assigning all bbb and ccc to FalseFalse\mathrm{False}), which results in the final operation of the whole formula as TrueTrue\mathrm{True}? If possible, this property is called satisfiability of this logical formula. How to quickly and efficiently judge the satisfiability of any specified logical formula is an important problem in theoretical computer science, and is also the first problem proved to be NP-complete (NPC).

It's easy to think about a way to determine "violence": test each possible arrangement of the assignments to these variables (for example, assign them all to TrueTrue\mathrm{True}, one to TrueTrue\mathrm{True}, the other to FalseFalsemathrm{False}...), and if there is an assignment arrangement that makes the result of the formula TrueTrue\mathrm{True}, Then you can see that this formula is satisfiable. However, it is clear that in the worst case this method requires us to test 2n2n2^n assignment permutations (n n n is the number of variables), and it is also not negligible to check the final result of each assignment permutation. Therefore, as the size of the formula increases, the computational complexity required for this violent algorithm increases exponentially, which is unacceptable to us.

However, according to the existing computational complexity theory, the SAT problem can not be solved within the polynomial time complexity, and DPLL algorithm is no exception.

Specifically, the algorithm will select a variable in the formula (proposition variable), assign it to TrueTrue\mathrm{True}, simplify the assigned formula, if the simplified formula is satisfied (recursively judged), then the original formula is also satisfied. Otherwise, assign the variable to FalseFalse\mathrm{False} in turn, and make a recursive decision that cannot be satisfied, then the original formula is unsatisfactory.

This is called the splitting rule because it separates the original problem into two simpler problems.

The DPLL algorithm solves the Conjunctive normal form (CNF), which is a logical formula with the following form:

(a∨b∨¬c)∧(¬d∨x1∨¬x2∨⋯∨x7)∧(¬r∨v∨g)∧⋯∧(a∨d∨¬d)(a∨b∨¬c)∧(¬d∨x1∨¬x2∨⋯∨x7)∧(¬r∨v∨g)∧⋯∧(a∨d∨¬d)(a\vee b\vee\neg c)\wedge
(\neg d\vee x_1\vee\neg x_2\vee\dots\vee x_7)\wedge
(\neg r\vee v\vee g)\wedge\dots\wedge
(a\vee d\vee\neg d)
It consists of several brackets enclosing part of the logic and composition, each of which is the logic or composition of many variables or variables'negative (logical non). It can be proved that all logical formulas that contain only logical AND, logical OR, logical NOT, logical implication and parentheses can be transformed into equivalent and proper norms. Next, we call the whole paradigm a "formula". We call each bracketed part a clause of the formula, and each variable in each clause or its negation a literal.

These two simplification steps are the main difference between DPLL algorithm and our "violence" algorithm. They greatly reduce the amount of search, that is, they speed up the algorithm.

For example, the following formula:

Next, we will deal with the occurrence of this variable in other clauses in turn, if one of the words in the other clause is the same as the words in the unit clause, as in the example above (a_b_c_d)(a_b_c_d)(a_vee b\vee c\vee\neg d) clause, we know that the value of (a) (a) must be True8744;mathrm{True}, and So this clause must also be TrueTrue\mathrm{True}, which means that this clause does not impose additional constraints on the entire formula (that is, the values of b, c, D b, c, d do not affect the value of this clause). We can completely ignore this clause, so delete it.

Consider the second clause in the above formula, where the negative text (a)(a)(a) appears. We know that it can't be TrueTrue\mathrm{True}. To have this clause have a value of TrueTruemathrm{True}, we can only trust the value of ccc. We can delete a\neg a completely because it does not affect the value of the clause.

The third clause in the first clause does not contain the occurrence of (a)(a)(a) or its negation, that is, the value of a a a does not affect the value of this clause, we can just leave it unchanged.

In this way, the above formulas are simplified to:

Summary: For all clauses that contain only one text LL\mathrm{L}, for each clause in the remainder of the formula CC\mathrm{C}:

After one operation, we found a new unit clause in the formula ©©© ， We can continue to propagate the unit clause once until no variable corresponding to any unit clause appears in other clauses in the whole formula.

The above formula can be reduced to:

©∧(d)∧(a)©∧(d)∧(a)©\wedge(d)\wedge(a)
Now even though each clause in the formula is a unit clause, its corresponding variables c, d, a c, d, a c, d, a do not appear in Clauses other than the unit clause. Unit clause propagation is no longer useful. We need to implement the second simplification step.

To summarize a sentence, delete the clause in which all isolated variables are located.

For the following formulas:

©∧(d)∧(a)©∧(d)∧(a)©\wedge(d)\wedge(a)
All three variables appear in isolation. We can delete all three clauses and the whole formula will be empty, so we can judge that the original formula is satisfactory.

These are the two simplification steps.

You can see that this is a recursive program, and the original formula is not empty for the input Φ 0 Φ 0\Phi_0, which aborts in two cases:

Next, we're starting to implement a foundation from scratch (without the complex ChooseVariable). Φ) ChooseVariable( Φ)\ DPLL L algorithm for mathrm{ChooseVariable}(\Phi) heuristic).

Notice that the algorithm involves a large number of text deletion and clause deletion operations, and may appear anywhere in the middle of the text list and clause list (that is, not simply deleting the head or end), as well as more traversal in processing individual clauses and text without random access. I use a Linked list to store the formulas we work with. Specifically, we use a two-dimensional chain table to store the conjugation paradigm, which can be viewed as a list of clauses, and each clause as a list of writing.

Each text has two attributes: the variable number (integer) and whether it is a negative text (Boolean value). When entering, we discretize all variable identifiers into variable numbers. 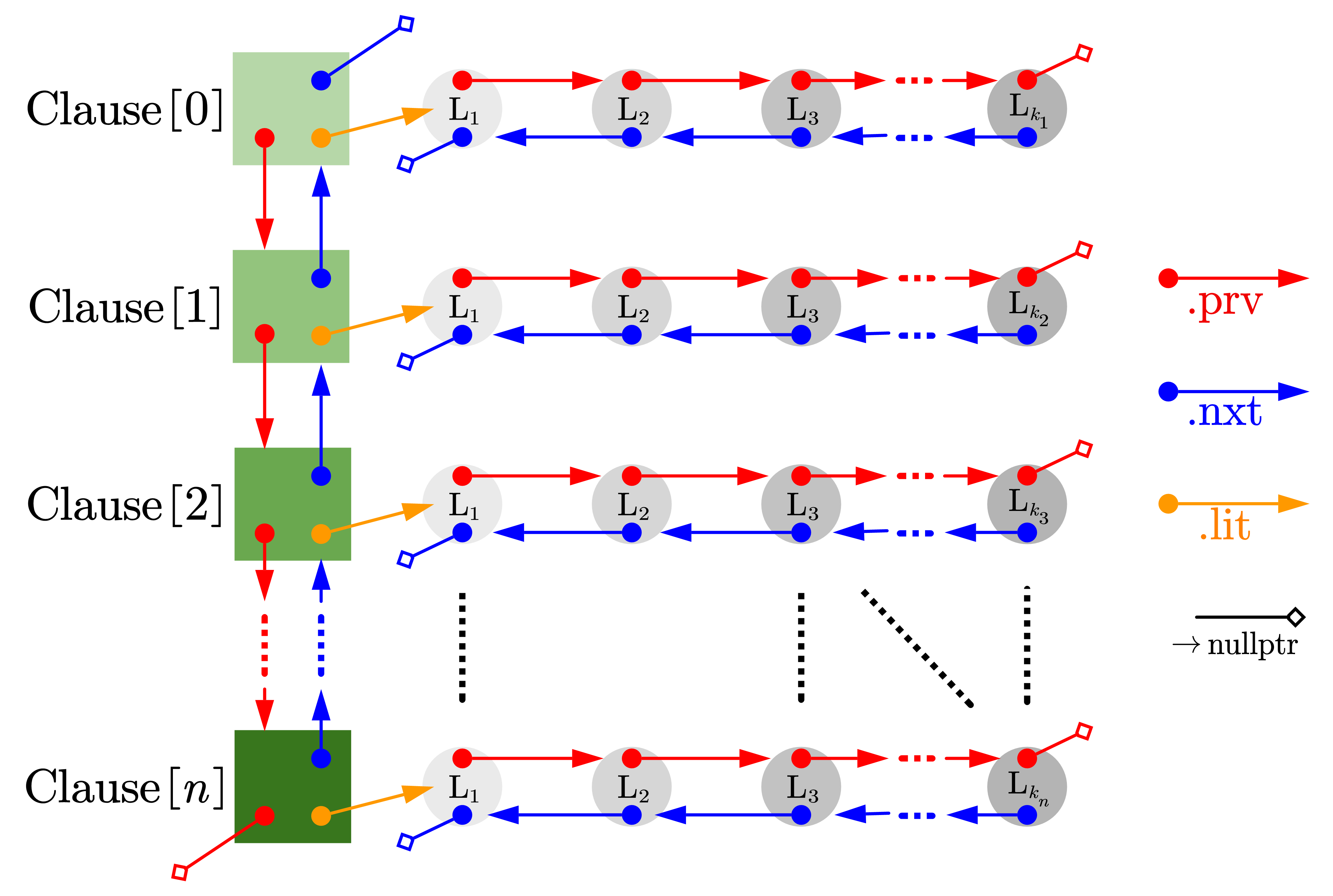 However, we find that the algorithm involves finding all the words of a particular logical variable. If a variable is assigned a value, all its words must be processed in turn. If only the structure of the chain list above is adopted, all clauses and words must be traversed in each process. We can efficiently traverse all the text of any variable by maintaining another two-dimensional chain table indexed by its name. It looks like adding a lot of jumpers to the list structure above. For the conjunction paradigm: 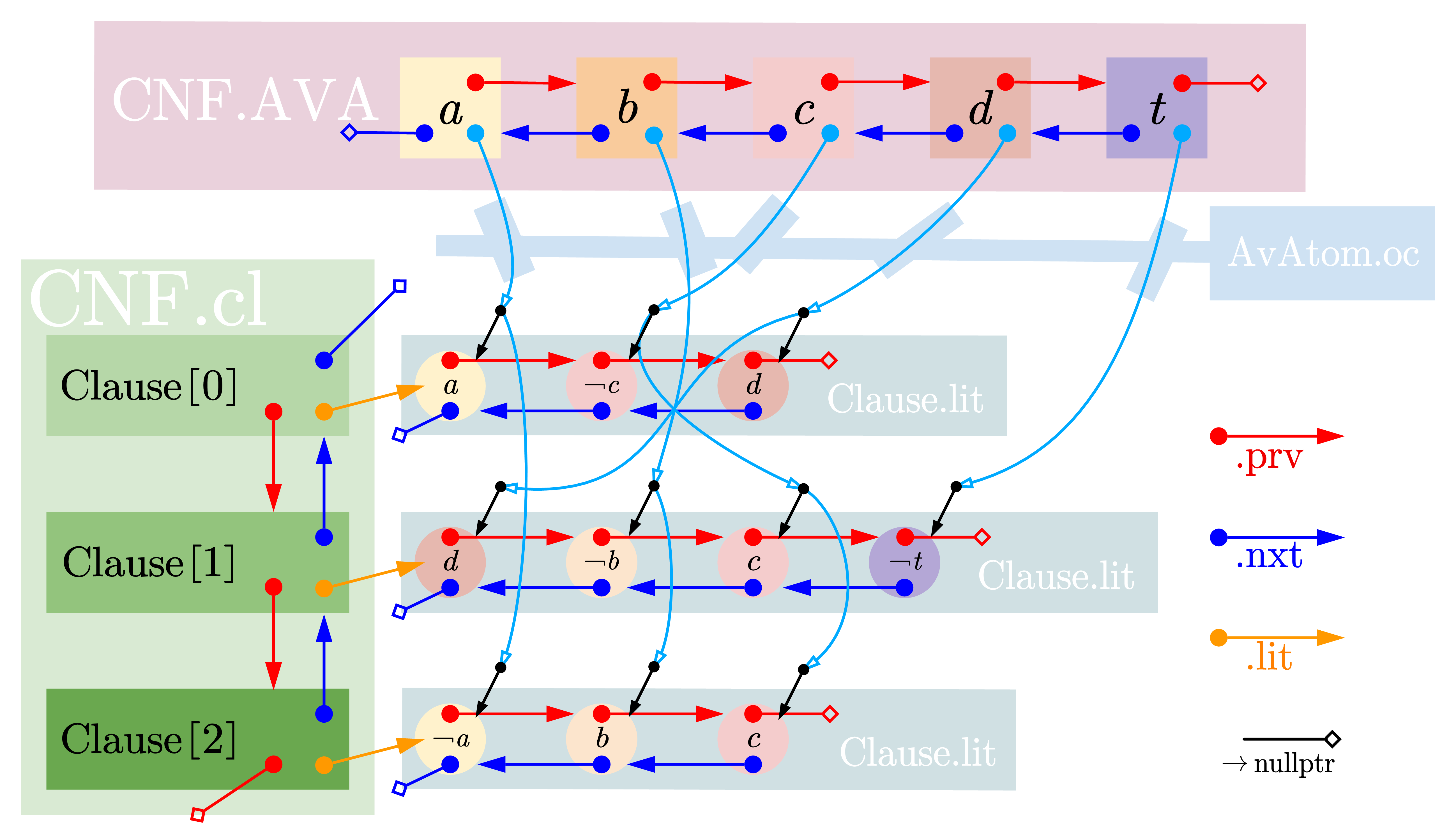 Figure 2: Adding a jumper to a two-dimensional chain table for more efficient traversal
Of course, only part of the key pointer structure is drawn, and the mid-sky blue "jumper" is also bidirectional. We can also find clauses by text and their corresponding text lists by adding some additional pointer storage.

In addition to the structure in the diagram, by maintaining a set (or list) of "unit clauses that are not propagated by unit clauses" in the deletion of text and clauses, and a set of variables with only one corresponding text, we can find all the unit clauses and isolated variables without traversing.

How do I go back? The simplest example is in pseudocode, where a historical version of the entire formula structure is copied directly by calling a copy of the parameters in the function during recursion. This sounds inefficient but easy to implement, but in fact, for a data structure with so many pointers, copying a complete, independent copy necessarily involves a lot of pointer redirection. This is very difficult and involves a lot of detail. Moreover, even if it is implemented, with a large number of recursive layers, the program will consume a lot of memory and contain a lot of redundant duplicates.

Here, I use a data structure based on stack and incremental storage. The DPLL algorithm can be seen as an algorithm for DFS searching on a binary tree. When the program executes this recursive algorithm, it maintains a stack in the call to a function (which is itself recursively) to store local variables in each function call. I've copied this structure by using stacks to store the parts of the formula structure that change in the assignments of one-tier searches.

Specifically, each arrow in Figure 2 above is a "pointer stack" that stores a series of pointers that identify a series of changes in the pointer's recursion process. In the process of simplifying and assigning each found formula state node, we only visit and modify the pointer at the top of the stack, and use a set to identify the pointer stack that has been modified in this process (simplification and assignment), which is maintained by a stack. Traversing the set at the top of the stack, releasing the top of all the pointer stacks, restores the version of the historical formula. The above data structure can be viewed as a simple partially persistent list group, but there are also many areas for optimization.

Some of the core code is given below, and the complete code is visible:

See the end of the article for instructions on how to use the code.

Input format: a positive integer nnn on a line, indicating that the conjunction paradigm contains nnn clauses. Next nnn line, line iii begins with a positive integer kikik_i means the clause contains kikik_i text, followed by kikikik_ I is a space-delimited string representing each text. If the string starts with ^, it means that the text is negative.

For example, the following conjunction paradigms:

Contains the header file dpll.hpp, guaranteed with slist.hpp can create a CNF object and call it in the same folder. The read() method reads the join paradigm from standard input and output. Then you can call the method. DPLL() applies the algorithm (with the parameter true to skip the simplification step), and a lot of debugging information is output together. If you want to get a feasible assignment scheme (provided the formula is satisfied), you can output it after applying the DPLL algorithm. The schemeStr() method generates a string with the following styles:

Each row represents the assignment of a variable, if it is underlined_ That means it can be assigned either true or false.

We apply the algorithm to the above sample conjunction paradigm and the output should be:

The presence of BACKTRACK in the middle of the output indicates that the algorithm performs a backtrace, restoring the formula back to its pre-assignment and simplification form.