_In the machine learning model, if there are too many parameters of the model and too few training samples, the trained model can easily be fitted. When training the neural network, we often encounter the problem of fitting, which is manifested in the following aspects: the loss function of the model on the training data is small, and the prediction accuracy is high; However, on the test data, the loss function is larger and the prediction accuracy is lower.

To sum up, there are always two drawbacks when training deep neural networks:

Dropout can alleviate the occurrence of over-fitting effectively and achieve regularization to some extent.

_In 2012, Alex and Hinton used the Dropout algorithm in their paper ImageNet Classification with Deep Convolutional Neural Networks to prevent over-fitting. Moreover, the AlexNet network model mentioned in this paper has triggered a boom in the application of neural networks and won the 2012 Image Recognition Contest, making CNN the core algorithm model in image classification.

_From the above paper, we can feel the importance of Dropout in deep learning. So, what exactly is Dropout?

One simple point Dropout says is that when we propagate forward, we stop a neuron's activation value at a certain probability p, which makes the model more generalized because it does not rely too much on certain local characteristics, as shown in Figure 1.

2. Dropout workflow and use

Suppose we want to train such a neural network, as shown in Figure 2. 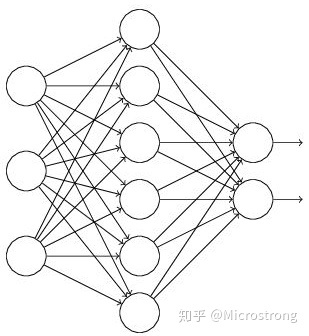 _Input is x output is y, the normal flow is: we first propagate x forward through the network, and then reverse propagate the error to determine how to update the parameters for the network to learn. After using Dropout, the process becomes as follows:

_First, half of the hidden neurons in the network are randomly (temporarily) deleted, while the input and output neurons remain unchanged (the dashed line in Figure 3 is a partially temporarily deleted neuron). 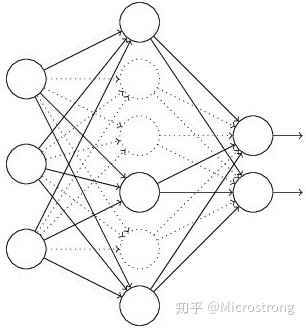 _Then continue the process:

Repeat this process over and over again.

2.2 Use of Dropout in Neural Networks

_Dropout's specific workflow has been described in detail above, but how can certain neurons stop working at a certain probability (that is, they are deleted)? How does the code level work?

_Below, we will specifically explain some of the Dropout code level formula derivation and code implementation ideas.

(1) In the training model stage

Inevitably, a probability process is added to each unit of the training network. 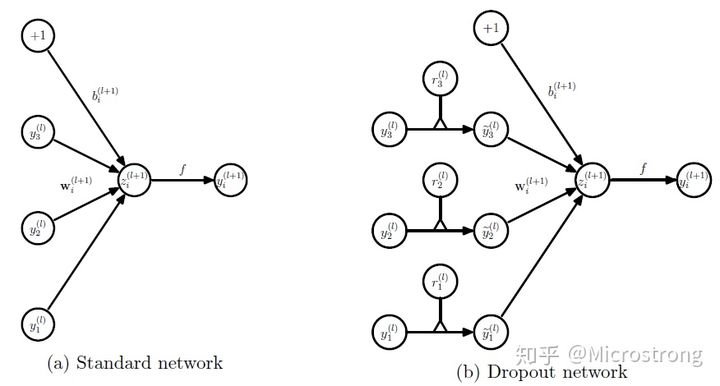 The corresponding formula changes as follows:

_The Bernoulli function in the above formula is used to generate a probability r vector, that is, a random vector of 0 and 1.

_Code level allows a neuron to stop working with probability p, essentially changing its activation function value to zero with probability P. For example, if the number of neurons in one layer of our network is 1000, and the output values of the activation function are y1, y2, y3,..., y1000, and our dropout ratio is 0.4, then after dropout, about 400 out of 1000 neurons will be set to zero.

_Note: After blocking some neurons above and making them active at 0, we also need to scale the vector y1...y1000, which is multiplied by 1/(1-p). If you did not rescale y1...y1000 after setting 0 during training, you will need to scale the weight during testing as follows.
(2) In the testing model phase

When predicting a model, the weight parameter for each neuron unit is multiplied by the probability p.

3. Why does Dropout solve the fit?

Reducing complex co-adaptive relationships between neurons:
_Because the dropout program results in two neurons not necessarily appearing in one dropout network at a time. In this way, the updating of weights is no longer dependent on the joint action of implicit nodes with fixed relationships, which prevents some features from being effective only under other specific features. The network is forced to learn more robust features, which also exist in a random subset of other neurons. In other words, if our neural network is making some predictions, it should not be overly allergic to certain segments of clues, and even if a particular clue is lost, it should be able to learn some common traits from many other clues. From this point of view, dropout is a bit like the L1, L2 rule, and reducing weights improves the robustness of the network to lose specific neuron connections.

Dropout is similar to the role of gender in biological evolution:
_Species tend to adapt to this environment in order to survive. Environmental mutations can make it difficult for species to respond in a timely manner. The emergence of sex can result in varieties adapted to new environments, effectively preventing overfitting, i.e. avoiding extinction when the environment changes.

The Loss of the red line is very low and is completely over-fitted.
By adding Dropout to the blue curve, the overfitting is significantly reduced and the curve is smoother. 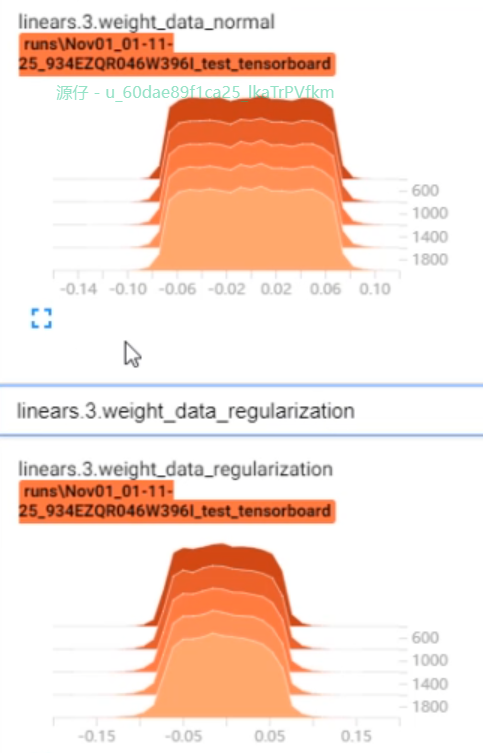 Note: The implementation of Dropout in Keras is to block out some neurons so that after their activation value is 0, the activation vector x1...x1000 is amplified, that is, multiplied by 1/(1-p).

_We have described two ways to zoom Dropout, so why does Dropout need to zoom?

_Because we randomly discard some neurons during training, but we can't discard them randomly when predicting. If some neurons are discarded, the result will be unstable, that is, given a test data, sometimes output a and sometimes output b, the result will be unstable, which is unacceptable to the actual system, users may think the model prediction is inaccurate. A compensatory scheme would then be to multiply the weight of each neuron by a p, so that the test and training data would be roughly the same overall. For example, if the output of a neuron is x, it has the probability of P participating in the training at the time of training, (1-p) discarded, then the expected output of a neuron is p x+ (1-p) 0=p X. So multiplying the weight of this neuron by P during the test would give you the same expectation.