Hello everyone, I believe that if you use Vue ecological development project, you should have heard of or are using Pinia state management library. If you haven't contacted Pinia, this article can help you get started quickly and how to use it more gracefully in enterprise projects.

This article first explains how to understand and use Pinia, and finally how to integrate Pinia into the project, which is suitable for most readers. As for studying Pinia's source code and other advanced popular science, another article will be opened for detailed description. In addition, all the demo s in this article are specially opened GitHub project To save, students in need can take it down and practice it. 🌹🌹

Pinia pronunciation: ['pi ː n ə]， It is a lightweight state management library recommended by Vue's official team to replace Vuex. Its original design idea was to let Vue Store have one Composition API State management library, and can support vue2 The Option API of version x and the setup Composition API development mode of version Vue3 are fully compatible with Typescript writing (which is also one of the important factors superior to Vuex), and are applicable to all Vue projects.

Compared with Vuex, Pinia has the following advantages:

Part of the above Pinia lightness is reflected in its code segmentation mechanism.

Let's first look at the code segmentation of vuex: when packaging, vuex will combine and package three stores. When vuex is used on the home page, this package will be introduced into the home page for packaging, and finally output a js chunk. The problem is that the home page only needs one store, but the other two unrelated stores are also packaged, resulting in a waste of resources.

Pinia's code segmentation: when packaging, Pinia will check the reference dependency. When the job store is used on the home page, packaging will only merge the used store and the page and output one js chunk, and the other two stores are not coupled in it. Pinia can do this because its design is separated from the store, which solves the coupling problem of the project.

If you are familiar with Pinia, you can skip this part 👻

Using the options API mode definition, this mode is similar to the component model of vue2, and it is also a more friendly programming mode for vue2 technology stack developers.

The use of setup mode definition conforms to the Vue3 setup programming mode to make the structure more flat. I recommend this method.

The reason why the first method is used is to write the getters and action keywords to distinguish, because it can be defined through the options API mode mapState(),mapActions() And other methods to obtain corresponding items; But the second method can be obtained directly (described in detail below).

In Src / components / piniabasicsetup Create a component under the Vue directory.

Vue2 compatible Options API can be called in here.

The change of state is handled by action: in the above example, counterStoreForSetup has a pinia instance attribute called $state, which can directly change the value of state, but it is not recommended to do so. First, it is difficult to maintain. When there are many components, a hidden state change is made, and the whole development team helps you check it; The second is to destroy the store encapsulation, which is difficult to transplant to other places. Therefore, for the sake of your reputation and safety, please stop coding 😇😇.

Replace pinia instance attribute with hook: there are many methods starting with $in the counter storeforsetup object after install ation. In fact, most of these methods can be introduced and replaced through hook.

Other thoughts to add

In the above example, we can know that when using store, we should first import the definition of store, and then execute the definition function to instantiate. However, after the project becomes larger and larger, should each component be instantiated when it needs to be used? As mentioned at the beginning of the article, pinia's code segmentation mechanism is to merge and package the pages that reference it. There will be problems like the following example. The user is referenced by multiple pages, and finally the user store is repeatedly packaged. 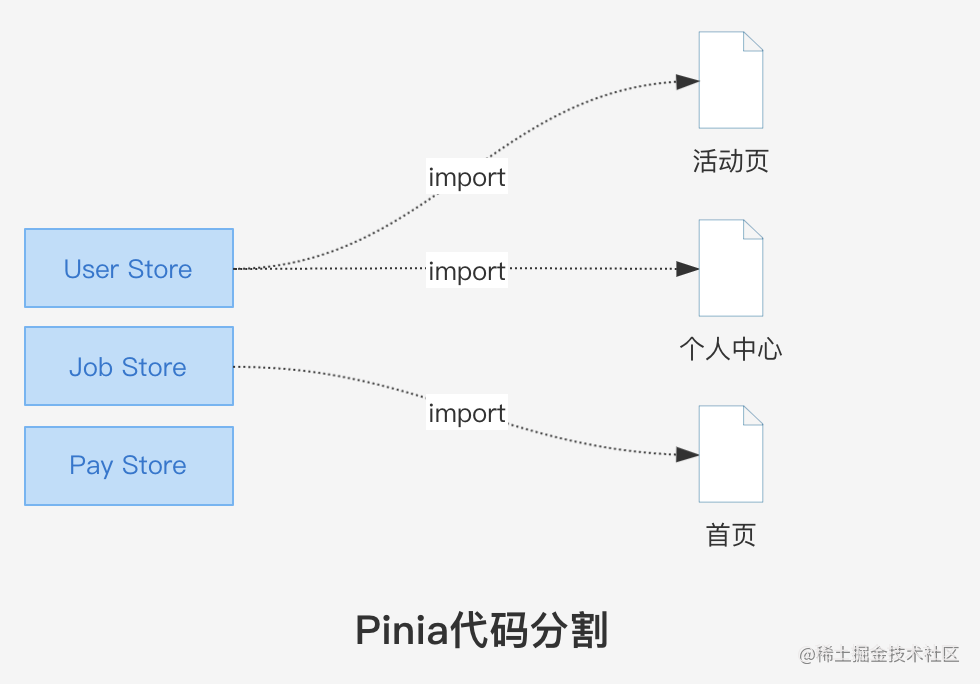 To solve this problem, we can introduce the concept of "global registration". The method is as follows:

Create an entry index. In the src/store directory TS, which contains a registration function registerStore(), whose function is to register the stores of the whole project in advance, and finally hang all store instances to the appStore for transparent transmission. In this way, when any component of the project wants to use pinia, just import appStore and get the corresponding store instance.

This is not enough. In order to decouple the appStore instance from the project, the appStore should be extracted to the public chunk in vite config. The TS is configured as follows

After such encapsulation, pinia state library is decoupled. The final project structure diagram is as follows: 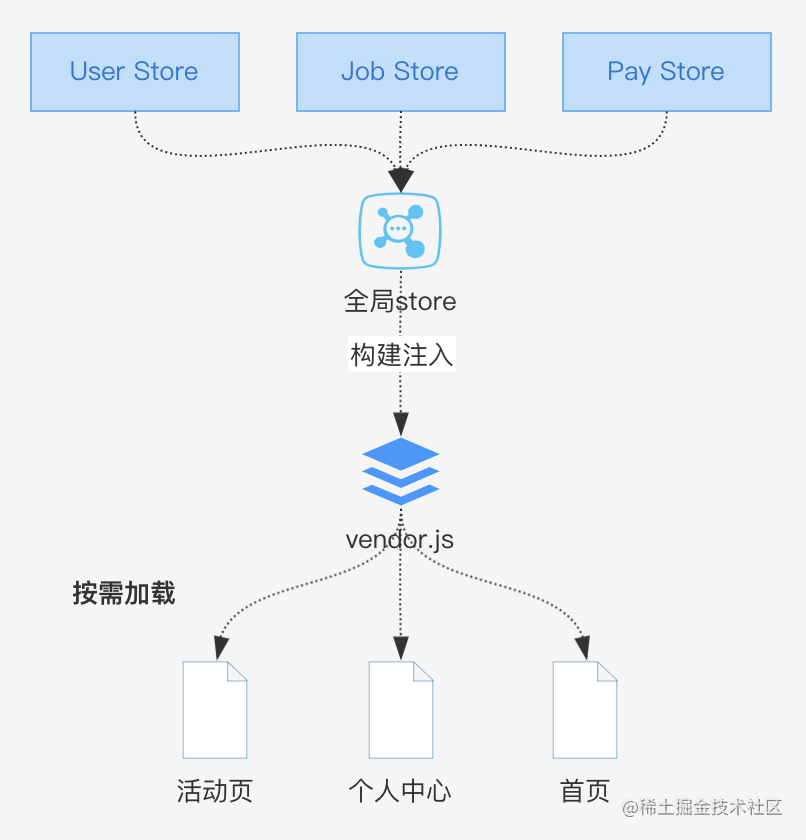 Do you often encounter the situation that a method needs to update multiple stores in the project? For example, if you want to play a game, there are three classes "warrior, mage and Taoist". In addition, the player character has three stores to control "character attributes, equipment and skills". There is a "transfer" button on the page, which can transfer to other classes. When the player changes his class, the state of the three stores should be changed. How to do it?

In contrast, method 2 is obviously better in terms of encapsulation or business decoupling. To do this, we also benefit from pinia's store independent management feature. We only need to take the abstract store as the parent store and the three stores of "character attributes, equipment and skills" as the unit store, and let the action of the parent store manage its own unit store.

For a project, a good state management scheme plays an important role, which can not only make the project thinking clear, but also facilitate the future maintenance and iteration of the project.

Finally, all the demo s of this article are specially opened GitHub project To save, students in need can take it down and practice. 🌹🌹