As a member of aikesheng DBA team, he is good at fault analysis and performance optimization. Please discuss relevant technical issues in this article.

*It is produced by aikesheng open source community. The original content cannot be used without authorization. For reprint, please contact Xiaobian and indicate the source.

In July last year, MongoDB Inc sent us MongoDB 5.0. This version not only brings the core feature - timing set, but also buries some small "pits" if it is used carelessly; If your environment is preparing to install, try or upgrade to MongoDB 5.0, you may wish to discuss it later.

First note that my Linux version is CentOS Linux release 7.2.1511.

Full of doubts, there is no problem using the lower version of MongoDB 4.4.9.

Execute the mongo or mongod command to obtain 2 lines of demsg logs with errors:

It can be seen that the command execution failure is caused by invalid opcode, which seems to be related to some instruction set of the operating system. 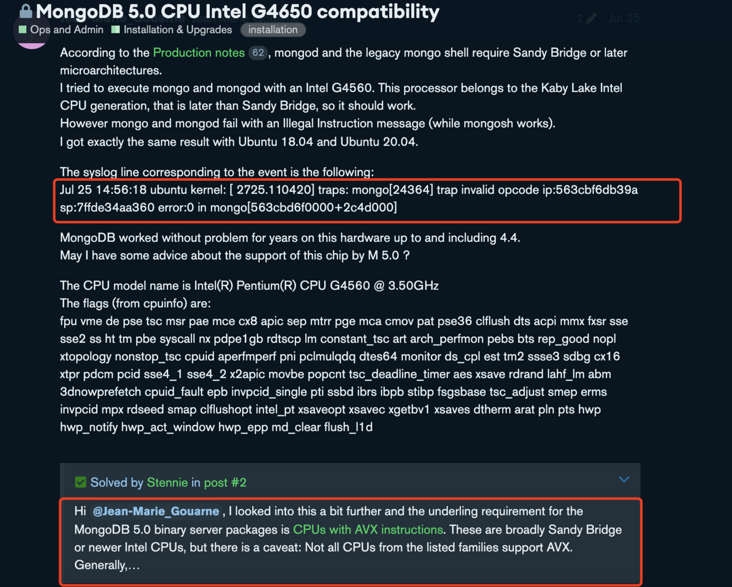 Although the operating system of this case is Ubuntu, the system error message is similar. The reason for the error is that the basic requirement of mongodb version 5.0 is that the CPU of the server needs to support AVX instruction set.

After carefully searching the official documents, you can see that the installation of mongodb version 5.0 really depends on the CPU supporting AVX instruction set: 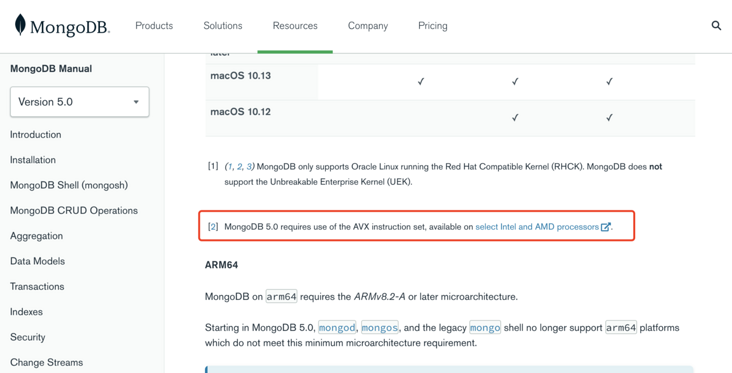 Check the CPU of my own server. It does not support avx (Note: if avx instruction set is supported, the flag field will print 'avx' string):

The command of MongoDB 5.0 is executed normally. 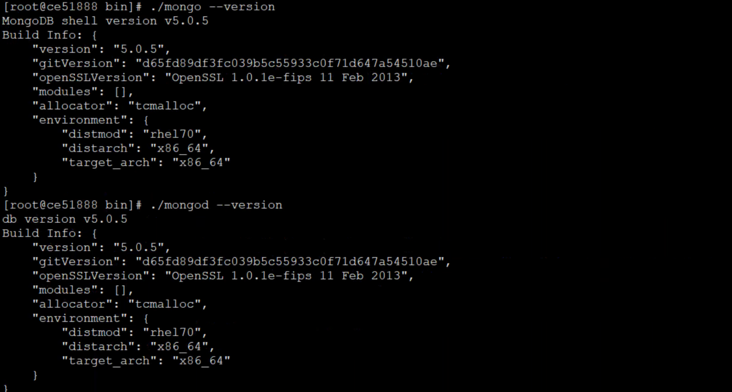 At present, the official MongoDB document only states that the installation of MongoDB 5.0 needs to rely on the server CPU to support AVX instruction set, but does not specify the specific reasons for support;

Only one article about MongoDB with AVX "Getting storage engines ready for fast storage devices" was retrieved on the Internet. It was mentioned that the highly optimized memcpy method based on avx can be used to copy data from the memory mapping area to the buffer of another application; It is speculated that the current release of version 5.0 includes the update of WiredTiger storage engine level mentioned in the article (the article mentioned that the read throughput after updating the engine has increased by 63%), and the optimization and update of the underlying storage engine depends on the support of avx.

If you need to install or upgrade to the new version of MongoDB 5.0, you must ensure whether your server CPU can support AVX instruction set architecture in advance. The check command is as follows: