Finding a few small math problems for ReentrantReadWriteLock is enough

With the padding of these two articles, it's easy to understand ReadWriteLock, which is both exclusive and shared for synchronization.

ReadWriteLock is translated literally as ReadWriteLock.In reality, business scenarios with more reads and fewer writes are common, such as applying caching

One thread writes data to the cache, while other threads can read data directly from the cache to improve data query efficiency

Mutexes mentioned earlier are exclusive locks, which means only one thread is allowed to access at a time. Mutexes are obviously an inefficient way to handle shared and readable business scenarios.To improve efficiency, a read-write lock model was created

Increasing efficiency is one aspect, but programming is more important to improve efficiency while ensuring accuracy

One write thread changed the value in the cache, and the other read threads must be "aware" of it, otherwise the value queried might be inaccurate

So the following three rules apply to the read-write lock model:

ReadWriteLock is an interface with only two methods:

So to understand the entire application of read/write locks, you need to start with its implementation class ReentrantReadWriteLock 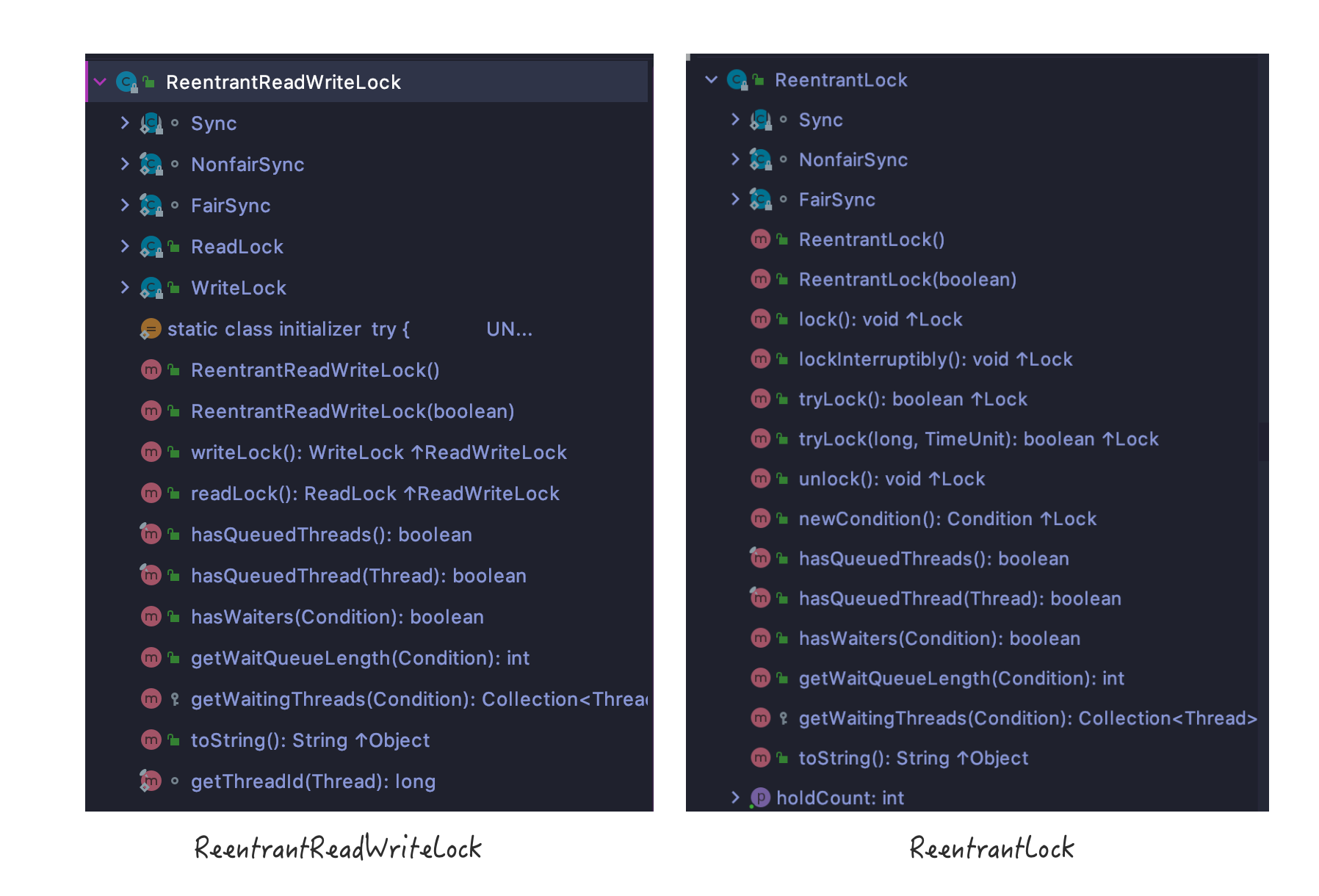 They are similar again, depending on the class name and class structure, you can also see the basic features of ReentrantReadWriteLock, as analyzed in the previous article:

The yellow-marked lock downgrade is not visible, so here's the first impression, which will be explained separately below

Also, I don't know if you remember, Java AQS Queue Synchronizer and ReentrantLock Application As mentioned, Lock and AQS synchronizers exist as a form of combination, since here are read/write locks, their combination modes are also divided into two types:

Here's just a reminder that the pattern hasn't changed. Don't be confused by read/write locks

So much said, if you forget the preamble, your overall understanding should be out of date, so let's start with an example (simulated use of caching) that gives you an intuitive impression of ReentrantReadWriteLock

How can an int-type state control both read and write synchronization?

Clearly a little design is needed

If you want to maintain multiple states on an int-type variable, you must split it.We know that int-type data takes up 32 bits, so we have the opportunity to cut states in bits.We cut it into two parts:

So if you want to accurately calculate the read/write status values, you must apply bit operations. The code below is JDK1.8, ReentrantReadWriteLock Custom Sync bit operations 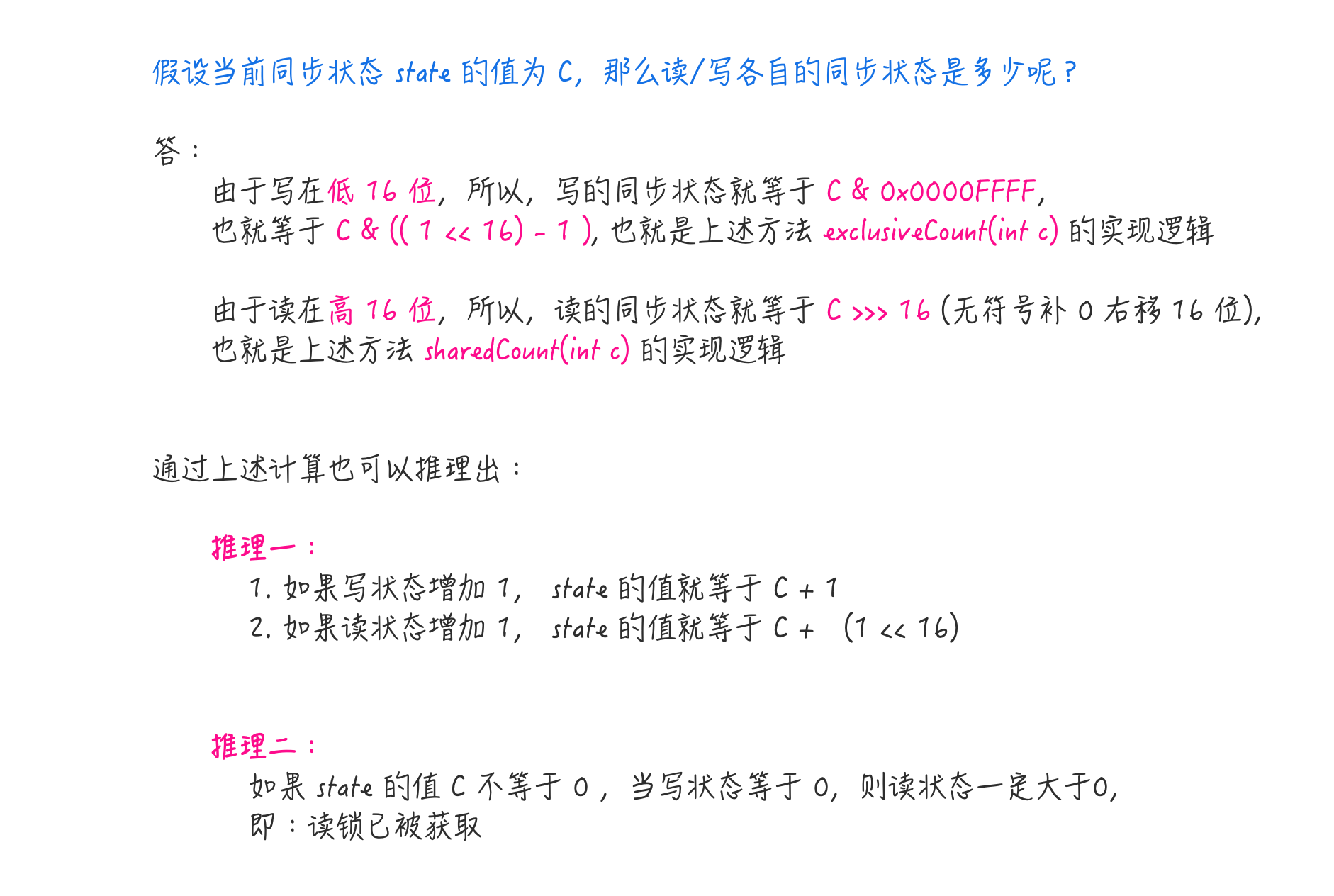 The entire ReentrantReadWriteLock calculation of the read/write state is to apply these math problems repeatedly, so before reading the following, I hope you understand this simple operation

Since the write lock is exclusive, it must be necessary to override the tryAcquire method in AQS

The writerShouldBlock in line 19 above is not mysterious either, it's just a judgment of fair/unfair access to locks (whether there are any precursor nodes)

Look, it's so easy to get a write lock

Since the read lock is shared, you must override the tryAcquireShared method in AQS

Simply put, if the current thread requesting a read lock finds the head of the synchronization queueIf the next node of the node is an exclusive node, then there is a thread waiting to acquire a write lock (failed to contend for a write lock and put in a synchronization queue), then the thread requesting to read the lock will be blocked, because there are more reads and fewer writes. Write locks may occur if there is no such judgment mechanism yet.

These conditions are met and you enter lines 14 through 25 of the tryAcquireShared code, which is mainly to record the number of locks held by threads.Read locks are shared, and to record the number of read locks held by each thread, ThreadLocal is used, because it does not affect the value of the synchronization state state, so no analysis is done, just put the relationship here

Now that the acquisition of the read lock is over, lost slightly more complex than the write lock, let's explain the upgrade/downgrade of the lock that might confuse you.

Upgrade and downgrade of read-write locks

**Personal understanding: ** Read locks can be shared by multiple threads, write locks are single-threaded exclusive, that is, write locks have a higher concurrency limit than read locks, so 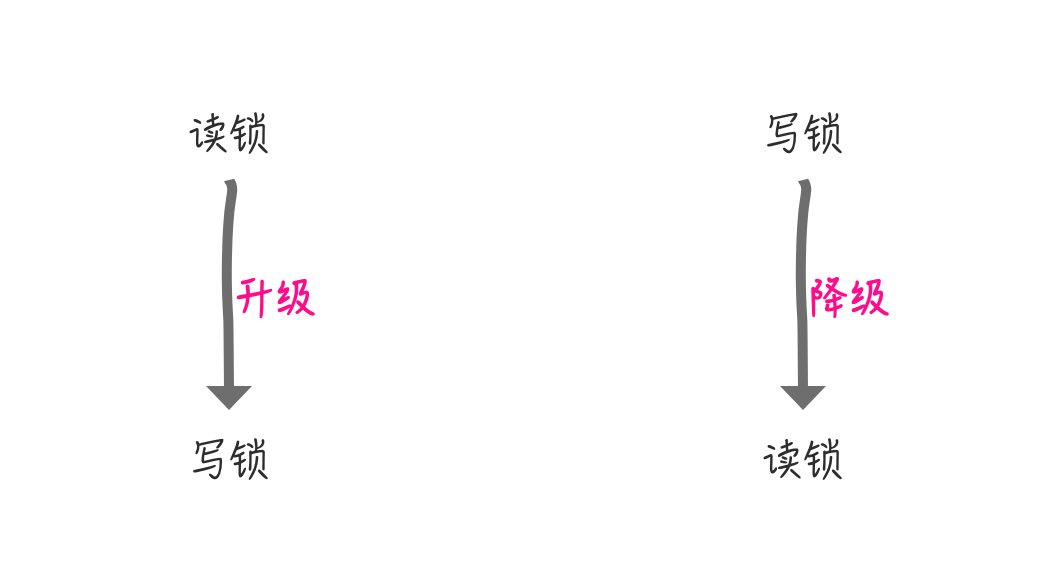 Before we can really understand the upgrade and downgrade of read-write locks, we need to refine the ReentrantReadWriteLock example at the beginning of this article

Children's shoes may be questionable

Inside the write lock, why does line 19 of the code need to retrieve the value from the cache again?Isn't that a redundant move?

In fact, it is necessary to try to get the value in the cache again here because there may be multiple threads executing the get method at the same time and the parameter key s are the same, up to line 16 of the codeWl.lock() For example: 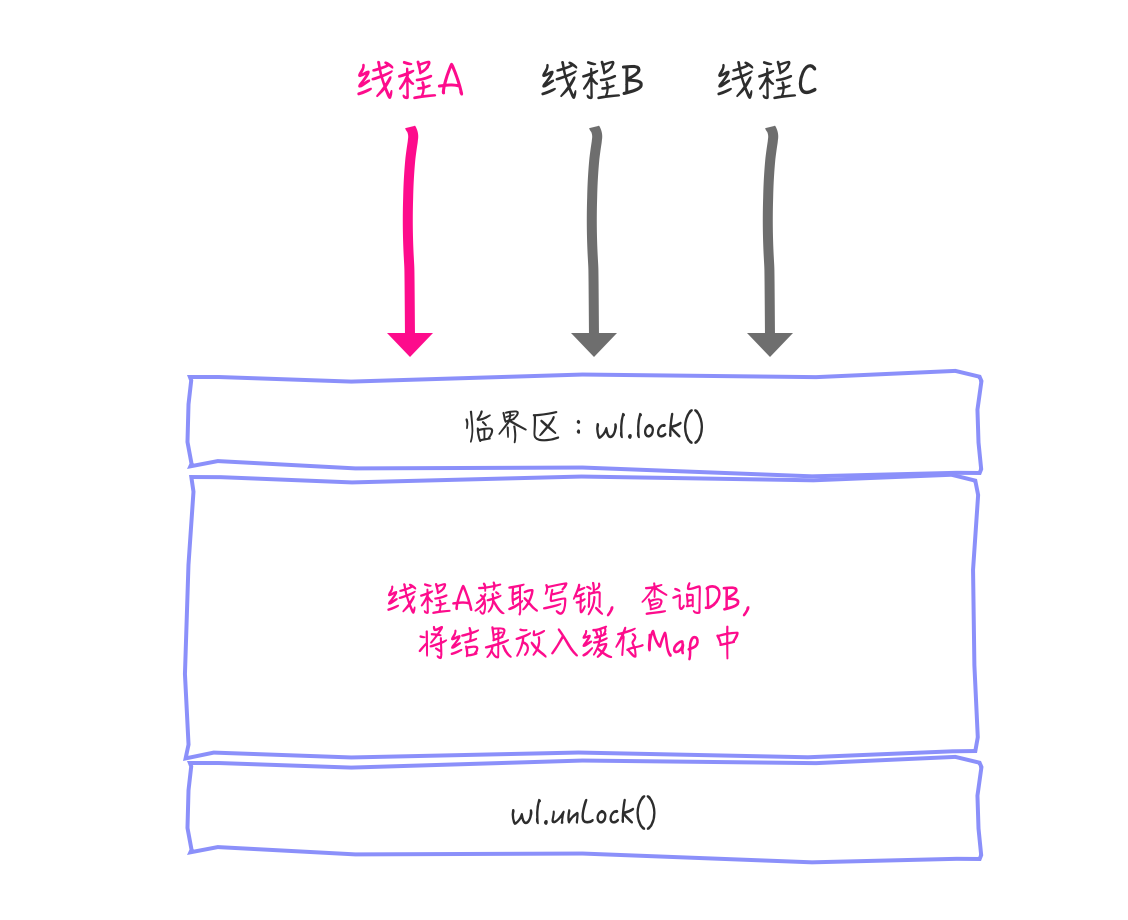 Since it is necessary to retrieve the cache again, can I directly judge in the read lock that if there is no value in the cache, then retrieve the write lock again to query the DB is not OK, just like this:

Upgrading read and write locks is not possible, so what about downgrading locks?This is Example of Oracle Official Gateway on Lock Degradation I'll paste the code here and you'll be interested in clicking in to connect and see more

The code declares a cacheValid variable of volatile type to ensure its visibility.

This process is a complete lock demotion process to ensure data visibility, which sounds reasonable, so here's the problem:

Why should the above code acquire a read lock before releasing the write lock?

If the current thread A releases the write lock instead of acquiring the read lock after modifying the data in the cache; assuming another thread B acquires the write lock and modifies the data at this time, thread A cannot perceive that the data has been modified, but thread A also applies the cached data, so data errors may occur

If thread A acquires a read lock before releasing the write lock following the lock demotion step, thread B will be blocked from acquiring the write lock until thread A completes the data processing and releases the read lock, thereby ensuring data visibility

Do I have to downgrade when using write locks?

If you understand the above question, you believe it has already been answered.If Thread A has finished modifying the data,When you want to reuse the data after a time-consuming operation, you want to use your modified data instead of the modified data by other threads, which really requires a lock downgrade; if you only want to get the latest data when you last use the data, not necessarily the data you just modified, release the write lock, acquire the read lock, and make theUse data as well

Here I'd like to add an extra explanation of your possible misconceptions:

I'm sure you've come here to understand how locks are upgraded and downgraded, and why they're allowed or prohibited

This paper mainly explains how ReentrantReadWriteLock uses state bitsplitting to achieve read/write synchronization. It also analyzes the process of acquiring read/write synchronization through source code. Finally, it understands the upgrade/downgrade mechanism of read/write locks. I believe you have a certain understanding of read/write locks here.If you find it difficult to understand what is in this article, I strongly recommend that you look back at the two articles at the beginning of this article, which are paved with a lot of content.Next let's look at CountDownLatch, the last concurrent tool class to use AQS