Genotype: internal expression of trait chromosome;
Phenotype: the external expression of a trait determined by a chromosome, or an individual formed according to a genotype;
Evolution: gradually adapt to the living environment and continuously improve the quality. Biological evolution is carried out in the form of population.
Fitness: measure the adaptability of a species to the living environment.
Selection: select several individuals from the population with a certain probability. Generally, the selection process is a process of survival of the fittest based on fitness.
Replication: when cells divide, the genetic material DNA is transferred to the newly generated cells through replication, and the new cells inherit the genes of the old cells.
Crossover: the DNA of two chromosomes is cut at the same position, and the front and back strings are crossed and combined to form two new chromosomes. Also known as gene recombination or hybridization;
Mutation: some replication errors may occur during replication (with a small probability), and the mutation will produce new chromosomes and show new traits.
Coding: genetic information in DNA is arranged in a certain pattern on a long chain. Genetic coding can be regarded as the mapping from phenotype to genotype.
Decoding: mapping from genotype to phenotype.
individual: refers to the entity with characteristic chromosome;
Population: a collection of individuals. The number of individuals in the collection is called the size of the population; 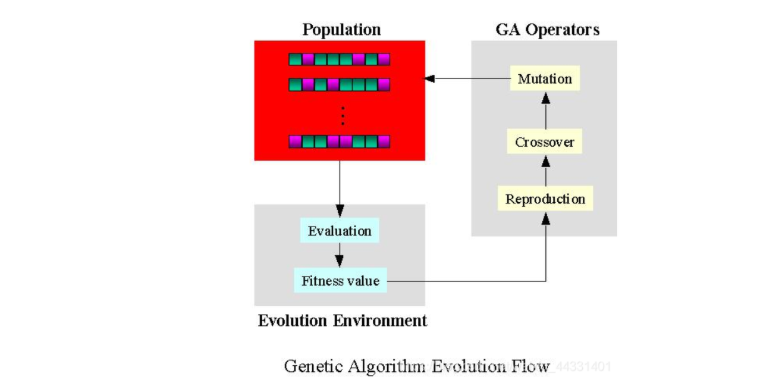 ③ Select, that is, calculate the corresponding selection probability and cumulative probability

⑥ To the next generation, cycle until the termination conditions are met 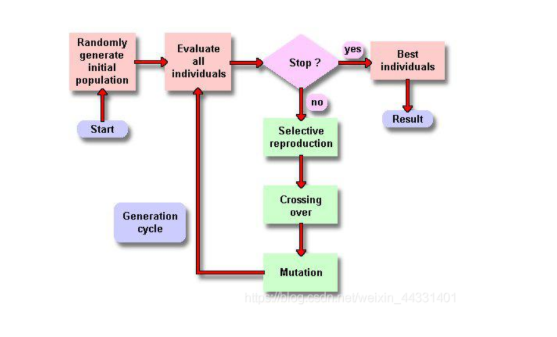 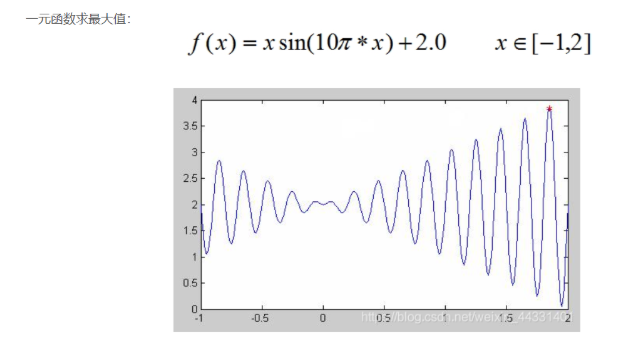 ① above is actually the conversion between binary and decimal:
The first step is to convert a binary string (b21b20... b0) into a decimal number:

The second step is the real number in the interval [- 1,2] corresponding to x '

Coding principle
completeness: all solutions in the problem space can be expressed as the designed genotype;
soundness: any genotype corresponds to a possible solution;
Non redundancy: one-to-one correspondence between problem space and expression space.

Improper design of fitness function may lead to deception:
(1) In the early stage of evolution, individual supernormal individuals control the selection process;
(2) At the end of evolution, the individual difference is too small, resulting in falling into local extremum.