In the previous article, we introduced the ThreadPoolExecutor thread pool. When submitting execution tasks through the submit method, we mentioned FutureTask, which can track the execution status of tasks. How is it implemented in jdk?

FutureTask can be used to asynchronously get execution results or cancel execution tasks. FutureTask is given the task passed in to Runnable or Callable (you can see it in the source code of the construction method below), and its run method is called directly or put into the thread pool for execution. After that, the execution result can be obtained asynchronously through the get method of FutureTask externally. Therefore, FutureTask is suitable for more time-consuming calculations. The main thread can obtain the results after completing its own tasks to reduce the waiting consumption

Similar to Runnable, unlike Runnable, the run method has no return value. Callable provides a call generic interface. The return type is the V type passed in. At the same time, it can also throw errors. The return value is the result obtained after the task is submitted. We can get the task execution result for subsequent processing

Future is an interface, which defines the basic task operation methods to implement the Runnable or Callable interface. It is mainly divided into three categories:

We can see that FutureTask finally implements the Runnable and Future interfaces at the same time, so it can be executed by threads as Runnable, and can be used as Future to get the Callable return value 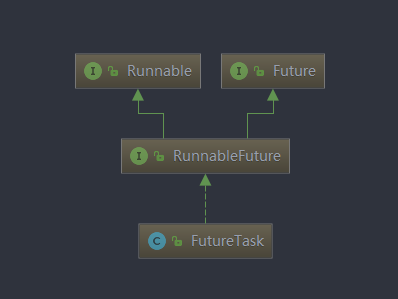 7 states are described as follows for your understanding with reference to the above state transition:

Please refer to the following figure for understanding:

There are two construction methods. For the tasks of the Callable interface and the Runnable interface, the task status is initially set to NEW

Looking back at the submit method in ThreadPoolExecutor, and looking at the submit method of AbstractExecutorService, we can see that there are many overloaded methods. Through newTaskFor, a layer of packaging is carried out first, while in newTaskFor, two construction methods of FutureTask are used to complete the packaging, and then the execution method is continued

The get method gets the task result, but it is not finished. It will block and wait through awaitDone

Judge whether the task has been CANCELLED, including the status of cancel, INTERRUPTING and INTERRUPTED. Refer to the above state transition diagram, it can be seen that the task state transition will return true after calling the cancel method

Judge whether the task is completed, not in the NEW state, and other States belong to the completed task. No matter whether it is abnormal, cancelled or completed normally, refer to the description of the above state transition diagram

Cancel task execution. The mayInterruptIfRunning parameter is allow to cancel a task that is executing but not completed

The execution method of the final task Thread is the same as the run method of Thread. The main process is as follows:

Set the result after the normal execution of the task, which is called in the run method. We can see that CAS in the method updates the execution status of the task twice, corresponding to the first situation in the state transition diagram: New - > completing - > normal

Similar to set, it is mainly called when there is an exception in task execution, which also corresponds to the second situation in the state transition diagram: New - > completing - > excel

If the task is executed normally, if it is abnormal or cancelled, it will execute. Traverse the waiters list, wake up the waiting thread in all nodes, and then leave the callable in it empty

Similar to run, the difference is that the task execution result will not be saved, and if the normal execution is completed, the set method will not be called to update the task status, similar to Runnable task

Remove the node node in the waiting list waiters

So far, the source code of FutureTask has been basically analyzed, which is not too complex in essence. To implement the tasks of the Callable() interface, then submit the tasks to the thread pool for execution. We only need to get the execution results through the get method, and at the same time, we can cancel the execution of the tasks, which is convenient for operation. FutureTask itself has seven states, which can be understood by referring to the state transition diagram or better understanding of its source code implementation

If there is any problem in the above content, please point out that the author will correct it in time after verification. Thank you