Given a group of n cities and the direct distance between them, find a closed journey, so that each city just passes through once and the total travel distance is the shortest.
TSP problem, also known as the problem of cargo carrier, is an old problem. It can be traced back to the question of Knight travel raised by Euler in 1759. In 1948, driven by Rand Corporation, TSP became a typical problem in the field of modern combinatorial optimization.
TSP is a combinatorial optimization problem with wide application background and important theoretical value. In recent years, there are many effective algorithms to solve this problem, such as Hopfield neural network method, simulated annealing method and genetic algorithm method.

For a practical problem to be optimized, it needs to be expressed as a form suitable for the operation of genetic algorithm. To solve TSP with genetic algorithm, a journey is naturally expressed as the arrangement of n cities, but the crossover and mutation operations based on binary coding are not applicable.
Path representation is the most natural and simple way to represent gene coding corresponding to journey. It is relatively easy to understand and realize in the process of encoding, decoding and storing. For example: Journey (5-1-7-8-9-4-6-2-3) can be directly expressed as (5 17 8 9 4 6 2 3)
(1) Generate initial population
One is completely random generation, which is suitable for the situation that there is no prior knowledge about the solution of the problem. The randomness is stronger, so it is more just
Second, some prior knowledge can be transformed into a set of requirements that must be met, and then samples are randomly selected in the solutions that meet these requirements. In this way, the initial population can make the genetic algorithm reach the optimal solution faster. The population has certain objective and representativeness, but the sampling is not as extensive as that of complete random, and whether the prior knowledge is reliable is also a problem
(2) Fitness function
In evolutionary search, genetic algorithm does not use external information, but only uses the fitness function of each individual in the population to search. The goal of TSP is that the total path length is the shortest, and the reciprocal of the total path length can be the fitness function of TSP:
Choice
Generally speaking, the selection will make the individuals with larger adaptability (excellent) have a greater chance of existence, and the individuals with smaller adaptability (poor) have a smaller chance of continued existence. The simple genetic algorithm adopts the roulette selection mechanism, in which Σ fi represents the sum of the fitness values of the population, and fi represents the fitness values of the ith chromosome in the population. Its ability to produce offspring is just the share of its fitness value FI / Σ fi.
(3) Cross
The coding method based on path representation requires that no duplicate gene code is allowed in an individual's chromosome coding, that is to say, to meet the constraint that any city must and can only access once. The individuals generated by the cross operation of basic genetic algorithm can not meet this constraint condition.
Partial matching crossover operation requires randomly selecting two intersections to determine a matching segment, and generating two sub individuals according to the mapping relationship given by the middle segment between two intersections in two parent individuals
For example, for the representation of the following two parents, randomly select two intersections' / '
P1: (123/4567/89)，P2: (452/1876/93)P1: (1 2 3 / 4 5 6 7 / 8 9)， P2: (4 5 2 / 1 8 7 6 / 9 3)P1: (123/4567/89)，P2: (452/1876/93)
First, the intermediate segment between the two intersections is exchanged to obtain:
o1: (xxx/1876/xx)，o2: (xxx/4567/xx)o1: (x x x / 1 8 7 6 / x x)， o2: (x x x / 4 5 6 7 / x x )o1: (xxx/1876/xx)，o2: (xxx/4567/xx)
Where x represents the code is not defined temporarily, and the mapping relationship of the middle segment is obtained. There are:
1----4，8----5，7----6，6----7
For the X part of the child 1, 2, respectively, the unselected city code is inherited from the parent, and the following results are obtained: o1: (x23/1876/x9), o2: (x x 2 / 4567 / 93) o1: (x23/1876/x9), o2: (X22 / 4567 / 93) o1: (x23/1876/x9), o2: (X22 / 4567 / 93)
Finally, according to the mapping relationship of the middle segment, for the first x of the above child 1, use the original parent code 1, from 1 to 4
The first x obtained by exchange is 4, which is similar to the second x of subspecialty 1. Using the initial parent code 8, the second x of subspecialty 1 obtained by exchange of 8-5 is 5. Similarly, the resulting sub individuals are:
o1: (423/1876/59)，o2: (182/4567/93)o1: ( 4 2 3 / 1 8 7 6 / 5 9)，o2: ( 1 8 2 / 4 5 6 7 / 9 3 )o1: (423/1876/59)，o2: (182/4567/93)
(4) Variation
Genetic algorithm to solve TSP problem based on binary coding mutation operation can not be applied, can not be realized by simple variable inversion
In TSP, the individual coding is a series of cities, in which two cities are randomly selected and their positions are exchanged. The algorithm is as follows:
Generate two random real numbers between 0 and 1;
These two random real numbers are transformed into random integers between 0 and n (city number) - 1;
The two random integer cities are exchanged; 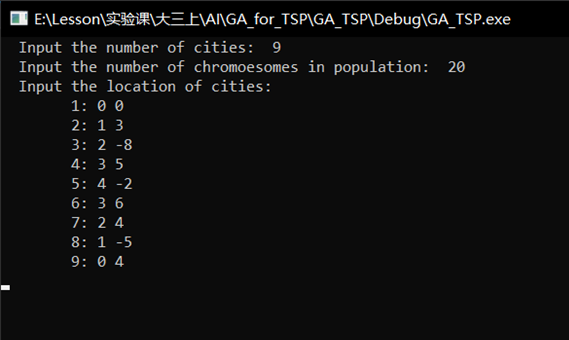 In the initial population, the chromosome with the highest fitness was 141414. The algebra T of input evolution is 100100100 generations 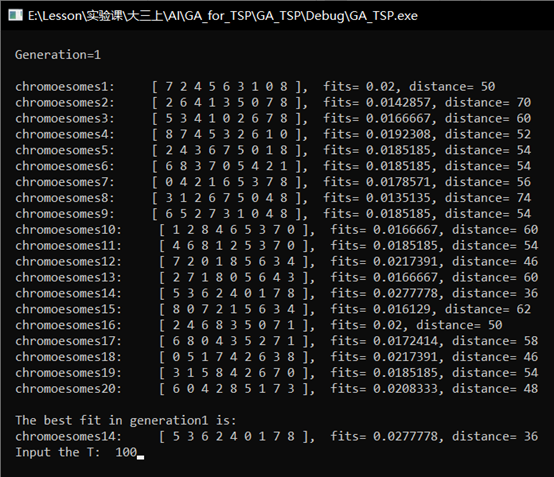 (2) In the first generation of population selection, the results of accumulation probability and roulette are output first, and then the selected population is displayed. 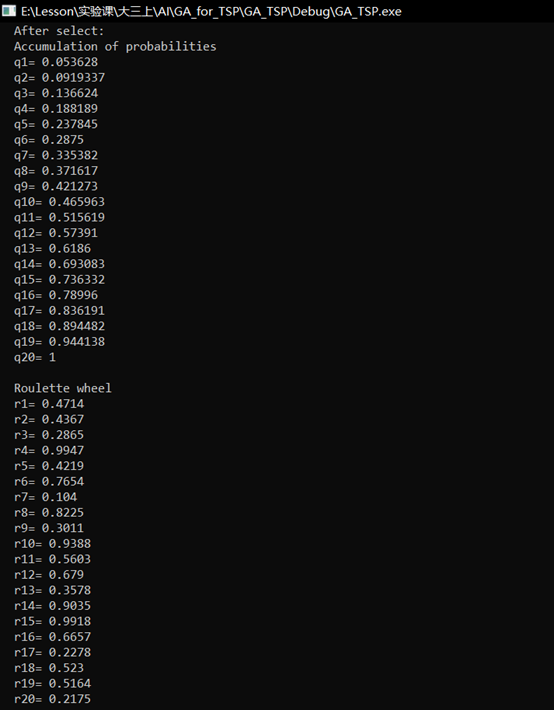 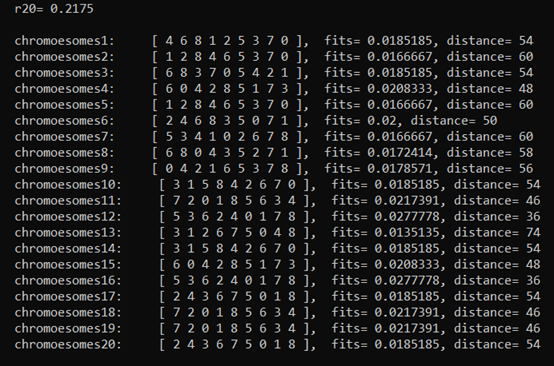 (3) After population selection, chromosome crossing is carried out (there is a part about print mapping function in the code, which will not be observed here and commented) 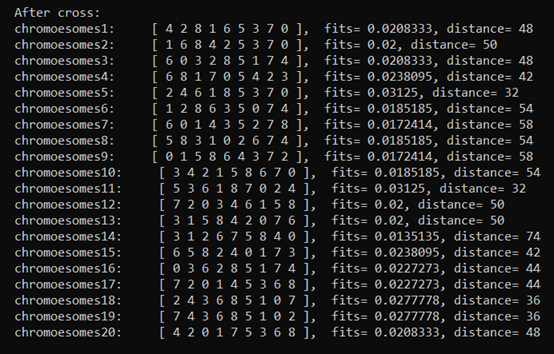 (4) After population crossing, the mutation was carried out (no chromosome mutation occurred in this round). So far, the population has evolved for a generation. 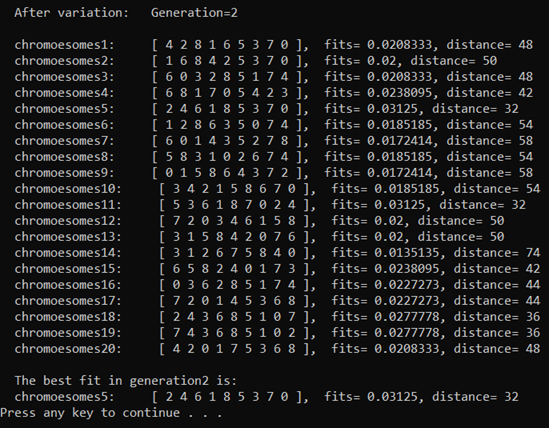 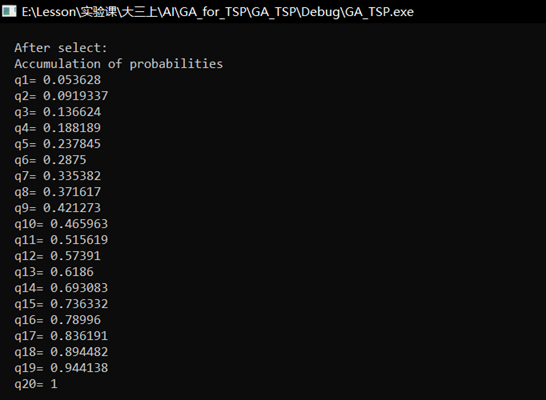 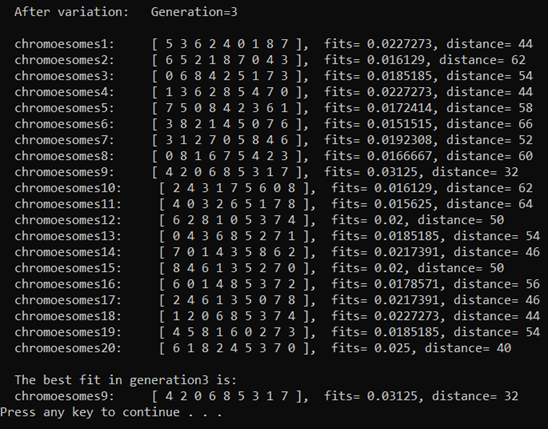 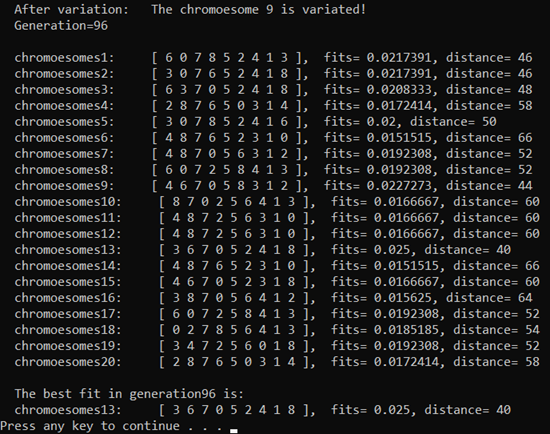 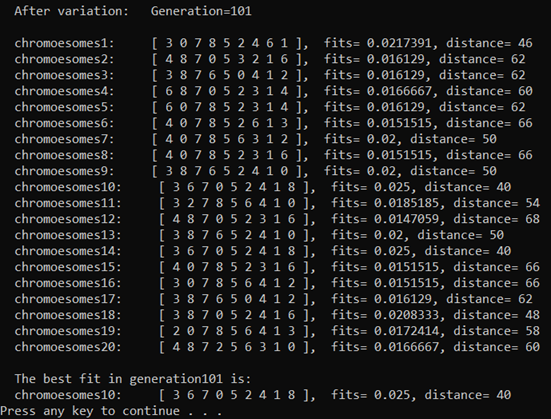 Through this experiment, I completed the genetic algorithm to solve the traveling salesman problem, and further understood the basic process of genetic algorithm. The low fitness in the experimental data is due to the reciprocal of distance. The location of urban coordinates will affect the overall fitness to some extent, but will not affect the evolution results. In order to avoid generating the same chromosome, the sleep() function is used to adjust the pseudo-random number, and the time of 1000 ms chromosome number in the population will be stopped after the input of city coordinates. In the crossover function, any position from 1 to (chromosome gene number-4) is selected as the starting position of crossover, and consecutive 3 or 4 positions are exchanged. The mapping function is set to avoid gene duplication after crossing. In the experiment, the number of input cities is 9 small, the number of chromosomes is 20 and the number of evolution algebra is 100 large, which leads to a fixed number of fitness in the evolution process.