It's 2022. We'll spend some time learning docker. We won't be fooled

Haven't you learned about docker yet? It doesn't matter. Let's simulate a few scenarios and find out what it is and when we need it in two minutes

Then we take the remaining seven or eight minutes and use docker to deploy vue2 and vue3 projects at the same time. Yes, that's so fast!

In the company, you are diligent and quickly recognized by the leader. On this day, he asked you to take over the following new projects. You need to install them on your computer

You can see that there are many different versions of nodejs and mysql: OK, it's small for me

At this time, the company has three new front-end interns and newcomers. The leader wants you to install these projects on their local computers

Due to the company's history and other reasons, they can only be equipped with computers with different operating systems: win7, win10, OSX, etc

Now you need to install these items on different operating systems of several computers. See the figure

"Installation is troublesome and time-consuming. When new people do projects, they have to switch matching versions for different projects. It is easy to make mistakes, which also pollutes the host environment and the host environment. When they think that there are more projects to do in the future, someone may already want to run away."

After awesome installation, you can do that. The leader has asked you to deploy these projects on the two small servers of the company's internal network, and do the public development and testing environment. Oh, these two servers are linux. Are you ready to start Baidu installing node and mysql in linux? And you still have to install multiple versions. What if the linux systems of the two servers are different?

Now it's your turn to carry the bucket

Don't panic. Here comes docker, which can help you smooth out the differences in application installation between different systems

Wait, why not use a virtual machine?

But docker doesn't. It starts in seconds, takes up less resources, smells good, and is easy to copy across platforms

After the configuration is written, it installs different versions of nodej, msyql, nginx, etc. on the computer at the same time with a command, and runs independently of each other. At this time, you don't need to switch back and forth manually

Isn't the above problem easily solved? Are you interested in docker now

Now let's start to understand the basics of docker

docker is divided into several concepts: image, container and warehouse

Image: it is like the system disk or system image file we need when installing. Here, it is responsible for creating the docker container. There are many official ready-made images: node, mysql, mono and nginx, which can be downloaded from the remote warehouse

Container: it can be compared to a mini system, such as one that only installs mysql5 7 is the smallest linux system. Of course, you can also install MySQL and node in the same container if you like. Remember * *, containers and containers, containers and hosts are isolated from each other**

Warehouse: the warehouse is like a github. We can create an image and then push it to the cloud warehouse, or we can pull and download the image from the warehouse

The installation of docker is very simple. Both win and osx are installed with graphical interfaces. linux also has a few lines of commands. Now the m1 chip series of mac also supports it. Let's skip the installation steps first. Be fast! Finish it first!

ps: installing mysql on the docker of m1 chip requires a little configuration

After installation, run the code below to view

After the docker is installed, let's go to the actual combat and rub our hands

ps: let's get started quickly. Let's put aside the installation of different versions of mysql for the time being

4.1 preparation of vue2 and vue3 projects

Do it together first, and we'll explain later

Now create a new file for our project: name it: my repository

We can see the startup status, port mapping and container name of the container 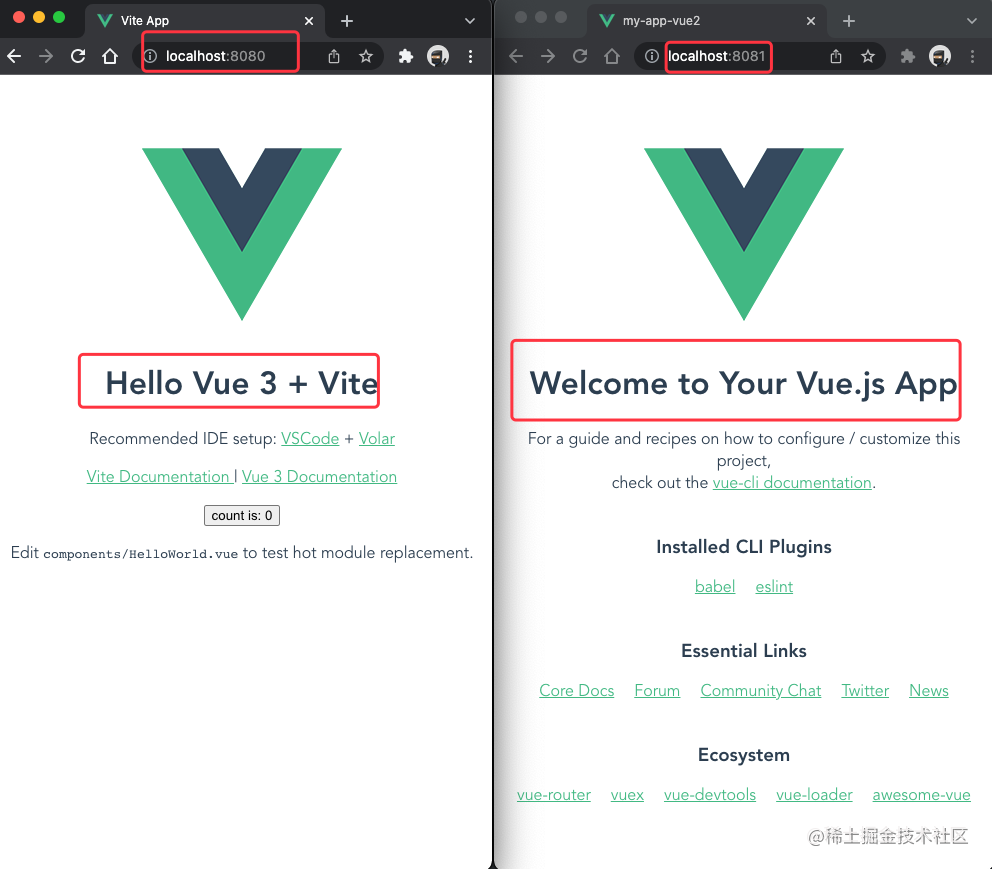 If there is an error, see the third point below: [debugging] (####3 debugging): run the following command to check the reason

What is the code of docker run xxxxx above? Now let's smooth it out

First, the docker run can be used to create a container for simultaneous startup and operation

Let's start with a new line: when the shell script is too long, we can use "\" to divide a line of command into multiple lines 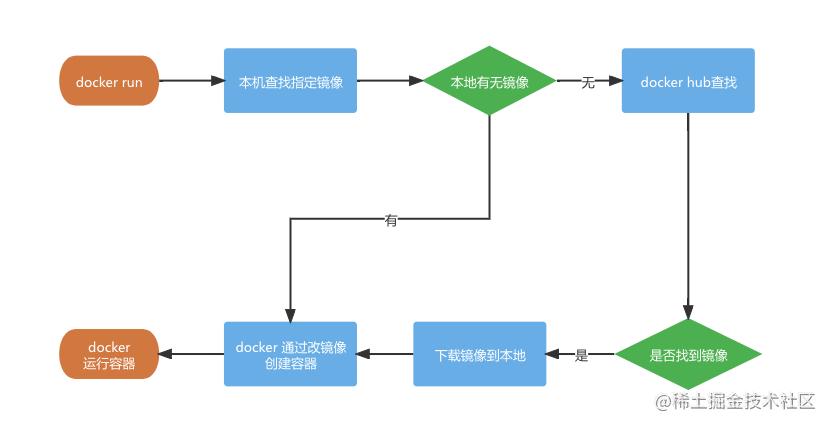 After the above code runs successfully, our computer will have two docker containers running independently of each other 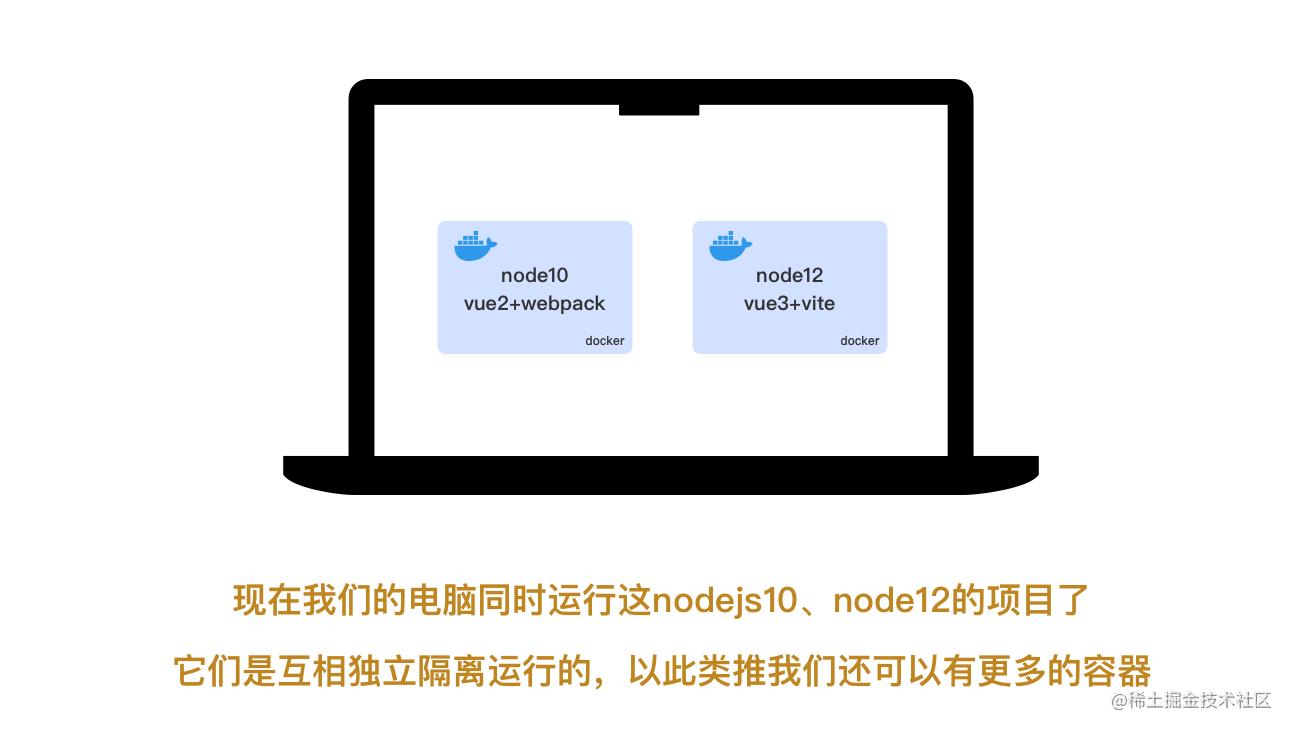 Of course, we can use this command to view the information output by the terminal when compilation is in progress or errors or even exits in the container

🌰 : After running successfully, view the real-time output information of npm run serve of myvue container on the terminal 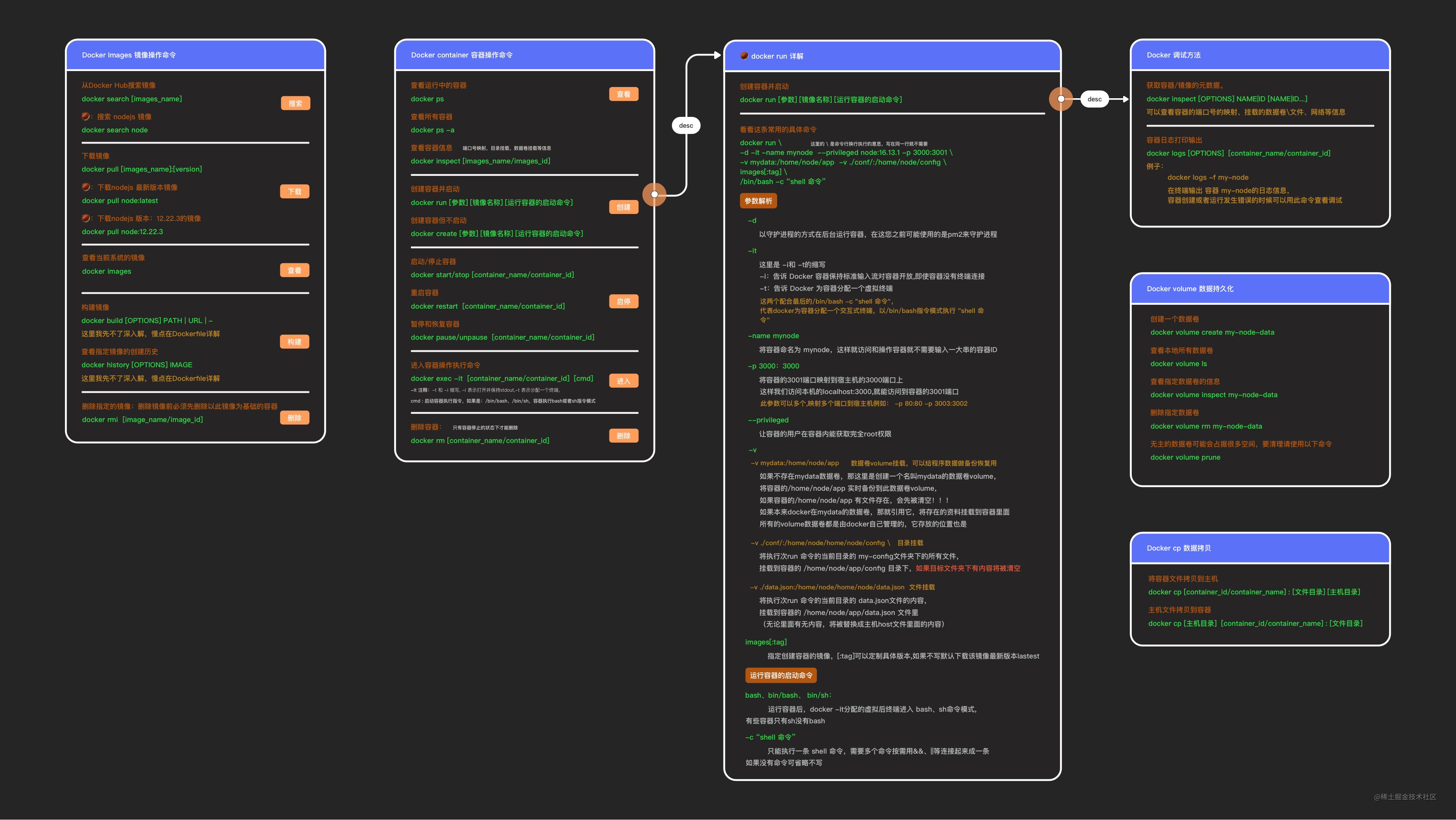 If there is no suitable image, we usually use Dockerfile to build a custom image

Did you find that the above docker run can only create and start one docker container. We can use docker compose to start multiple containers at one time. It is often used to install multiple services under a single machine

Please update later. If you are interested, you can also see my deployment with docker first Jenkins Automated Deployment CI/CD environment There is also the use of docker compose