In the last article, I shared how the Go compiler parses source files into tokens. This article mainly shares how the syntax parsing stage performs syntax parsing according to different tokens. In this article, you can learn the following:

💡 Tips: the article will involve grammar and production. If you don't know much about it, please take a look at the previous Lexical analysis & the basis of grammatical analysis This article

The article is relatively long, but there are many codes, mainly for easy understanding. I believe you will gain something after reading it

In order to facilitate the later understanding, I provide a source file here. You can bring in the following contents according to the contents of the source file:

Because in Last The article has shared the location of the entry file and what it does in detail (src/cmd/compile/internal/syntax/syntax.go → Parse(...)), After the initialization of the parser and lexical analyzer is completed, we will see that it calls the fileOrNil() method of the parser, which is the core method of parsing. Next, we will introduce what this core method does

This part will involve the parsing of each declaration type and the structure of each declaration type, as well as the relationship between the nodes of the syntax tree generated by the syntax parser. Some places are really difficult to understand. You can read the text roughly first, and then combined with the grammar analysis diagram below, it may be easier to understand

I'll introduce this part as a whole first, and then go to the details

Enter the fileOrNil() method, and you will see such a line of comments in the comments

It is the grammar rule of Go parsing source files, which is in the second article of the series Fundamentals of lexical and grammatical analysis It is mentioned in part. After initializing the parser and lexical analyzer, the Go compiler will call this method. This method will continuously obtain tokens through the next() method provided by the lexical word splitter. The syntax analysis will be carried out according to the above grammar rules

fileOrNil() simply means parsing the source File according to the grammar SourceFile, and finally returns a syntax tree (File structure, which will be described below). As we know, the compiler will parse each File into a syntax tree

After understanding the meaning of the above grammar, let's look at how fileNil() parses the grammar according to the above grammar. But before that, you need to know what the node structure of the syntax tree generated by the fileOrNil() method is

Structure of each node of syntax tree

We know that the fileOrNil() method will generate a syntax tree according to the grammar rules of SourceFile, and the structure of each syntax tree is such a structure: (src/cmd/compile/internal/syntax/nodes.go → File)

fileOrNil() will parse all declarations (such as var, type, const) in the source file into DeclList according to the structure of each declaration (each declaration defines corresponding structures to store declaration information, and these structures are the child nodes of the syntax tree). In the grammar above, we can see the constant, type and variable declaration grammar, as well as the grammar of functions and methods, which can be found in Src / CMD / compile / internal / syntax / parser Found in go

BlockStmt is composed of a series of declarations and expressions. You can find it in Src / CMD / compile / internal / syntax / nodes You can see many expressions and declared structures in go (these structures are also the node structures under the function declaration)

Does it look familiar? There are if, for and return. Stmt in BlockStmt is an interface type, which means that various expression types or declaration type structures above can implement stmt interfaces

In this part, I will not go deep into each function to see how it is parsed, but introduce how it parses the token in the source file step by step from the general outline, because this part is mainly understood from the whole first. How to parse import, var, const and func will be described in detail in the next section

You can see that the code implementation of fileOrNil() mainly includes the following parts:

There are two important methods in fileOrNil(), which are the key to understanding what fileOrNil() is doing:

The first is the got function, whose parameter is a token, which is used to judge whether the token obtained from the lexical analyzer is the token passed in from the parameter

Then there is the appendGroup function, which has two parameters. The first is DeclList (described earlier when introducing the members of the File structure, which is used to store all declarations in the source File and is a slice type); The second parameter is a function, which is the analysis function of each type of declaration statement (for example, if I currently resolve to import declaration statement, I will pass the method of resolving import as the second parameter to appendGroup)

When parsing the import declaration statement, the following is the code:

The function of appendGroup is to find out the definition of batch, such as the following

Others include declaration statements such as const, type, var and func, which are matched and parsed by switch. They also have corresponding parsing methods (in fact, the code implemented according to their own grammar rules). I don't list them here. You can use Src / CMD / compile / internal / syntax / parser View in go

As we mentioned earlier, the parser will eventually use a different structure to build each node of the syntax tree. The root node is Src / CMD / compile / internal / syntax / nodes go → File. Its structure has been introduced earlier, mainly including package names and all declaration types. These different types of declarations are the child nodes of the syntax tree

It may be a little difficult to understand through the text description above. The following shows what the whole syntax parsing process is like through a diagram

Take the source code provided at the beginning of the article as an example to show the process of syntax parsing. stay Go lexical analysis It is mentioned in this article that the compilation entry of go is from Src / CMD / compile / internal / GC / noder Go → parseFiles 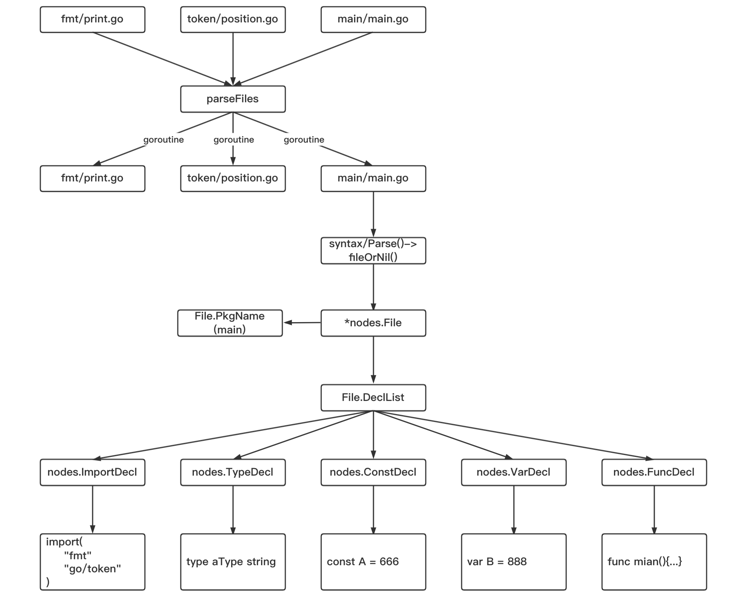 Here, I believe you have an overall understanding of the grammar analysis part of Go. However, the above does not show how various declaration statements are parsed down, which requires an in-depth look at how the parsing method of each declaration statement is implemented

For the parsing of various declarations and expressions in Go syntax analysis, you can find them in Src / CMD / compile / internal / syntax / parser Find the corresponding method in Go

In this appendGroup, the importDecl() method will eventually be called (it can be found from the above code that the parsing method of the import declaration will not be executed until the token of the import is matched)

First of all, import can be used in the following ways:

For space reasons, I won't stick out the source code of the importDecl() method. I sort out what it does here:

What is worth mentioning here is the oliteral() method, which will get the next token to see if it is a token of basic face value type, that is_ Literal

It is not difficult to see that when the basic face value type is parsed, it is already indecomposable, which is the terminator in grammar. In the syntax tree, these terminators are leaf nodes

Relevant methods are provided in the go standard library to test syntax parsing. Here, I test the results of syntax parsing during import through the interface provided by go/parser:

You can test various types of declaration parsing or expression parsing in the standard library. I won't show the tests one by one below (the test method is the same, but the fields you need to print need to be changed)

When the parser gets_ When type is a token, it will call the type parsing method to parse. Similarly, in fileOrNil(), you can see the following code:

It will call the typeDecl() method in appendGroup, which is based on the grammar declared by type type, which is introduced in the front. We know that type has the following usage:

Let's look at what has been done in this method:

When getting the type of the token on the far right, you need to continue parsing according to its type. If it is a chan type, it will create a chan type structure and initialize the information of this chan type (in the process of parsing, each type of structure created is a node)

When the parser gets_ When const this token, it will call const's parsing method to parse it. Similarly, in fileOrNil(), you can see the following code:

const has the following usage:

Then you can look at the concrete implementation of constDecl method (in fact, it is parsed according to the syntax of const declaration). It will not be repeated here. It is similar to the type resolution above. The corresponding structure is created first, and then some information of the type is recorded. The difference is that it has a list of names, because const can declare multiple names at the same time. The parsing method is parser go→nameList()

When the parser gets_ When var is a token, it will call the var parsing method to parse. Similarly, in fileOrNil(), you can see the following code: 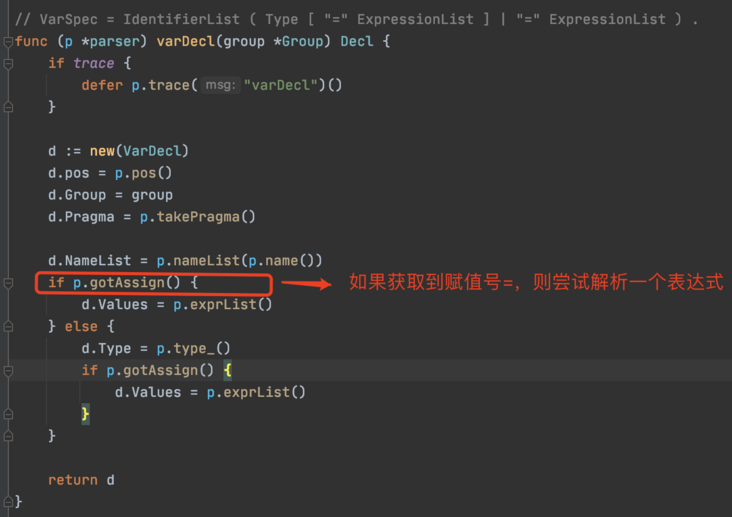 💡 Note: a figure will be added to show the process of function analysis

In fileOrNil(), you can see the following code:

The core method of parsing function is funcDeclOrNil. Because the function parsing is a little more complex, I'll stick out its implementation here and explain what each line of code is doing through comments

Two important implementations of function parsing: funcType(), funcBody(). What did they do internally?

The above function analysis process is shown in the figure for easy understanding: 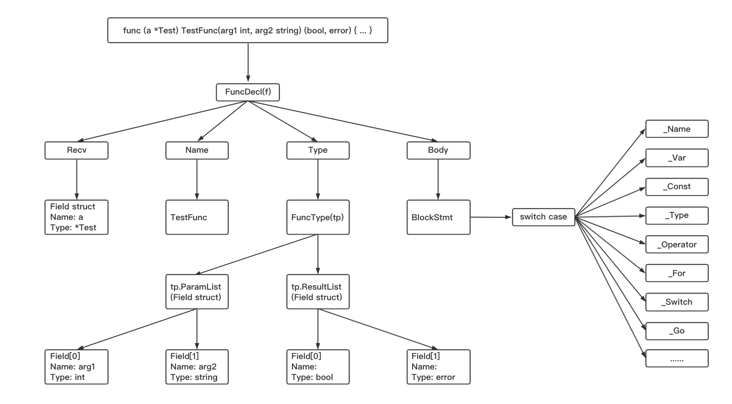 You can see how to parse some functions in the function body, such as assignment, for, go, defer, select, etc

This paper mainly shares the process of syntax parsing as a whole, and briefly shows the internal implementation of type, const and func declaration parsing. In fact, there are expression parsing, including some other syntax parsing. There are many contents, which can't be introduced one by one. Interested partners can study them by themselves

Thanks for reading. The next topic is: abstract syntax tree construction