Hi, everyone, this is senior student Dan Cheng. Today I'd like to introduce a project to you

Emotional analysis of film review based on GRU

You can use it for graduation design

This example will analyze and visualize the meteorological data in the northern coastal area of Italy. First of all, we will use the matplotlib Library in Python to chart the data, then call the SVM Library in the scikit-learn library to do regression analysis on the data, and finally draw our conclusion with the support of chart analysis.

Why Italy? Because there are ready-made data sets, if you want to analyze data from other places, you can collect and crawl.

3.1 impact of Ocean on local climate

Italy is a peninsula country surrounded by the sea. Why limit your choice to Italy? Because the problem we study is just related to a typical behavior of Italians, that is, we like to hide by the sea in summer to avoid the hot inland. Italy is a peninsula country. It is not a problem to find sea areas that can be studied, but how to measure the impact of the ocean on different places far and near? This raises a big problem. In fact, Italy is mostly mountainous, almost far from the sea, and there are few inland areas that can be used as a reference. In order to measure the impact of the ocean on the climate, I exclude mountains, because mountains may introduce many other factors, such as altitude.

The Po River Basin in Italy is very suitable for studying the impact of the ocean on the climate. This plain starts from the Adriatic Sea in the East and extends hundreds of kilometers inland (see Figure 1). Although there are many mountains around it, it weakens the influence of the mountains because it is very broad. In addition, the region has dense cities and towns, which is also convenient to select a group of cities far and near the sea. The maximum distance between the two cities is about 400 kilometers. 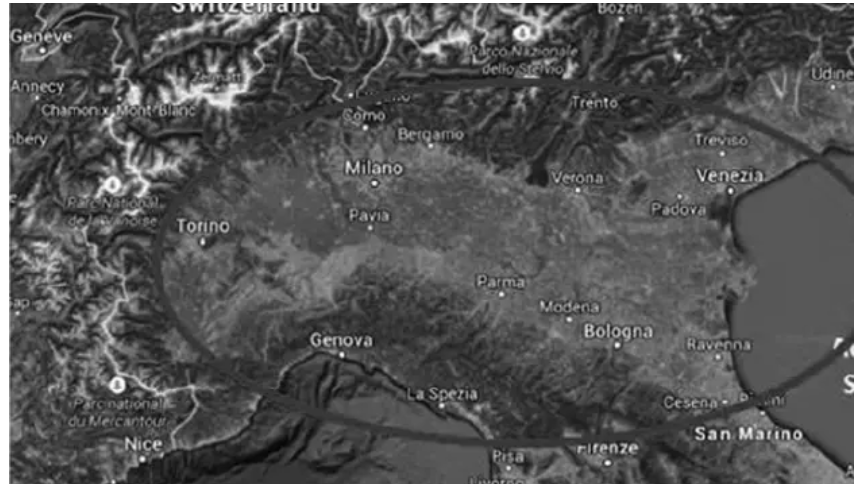 The first step is to select 10 cities as the reference group. When selecting cities, pay attention that they should represent the whole plain area

The list of cities selected as the sample is as follows:

Next, we need to calculate how far these cities are from the sea. Here, the service provided by the timenow website is used to calculate the distance between other cities based on the coastal city Comacchio:

After downloading the data set, import the relevant package, load the relevant data and start the correlation analysis.

To view the dataset structure:

A very simple analysis method is to analyze the change trend of temperature in a day. Take the city of Milan as an example. 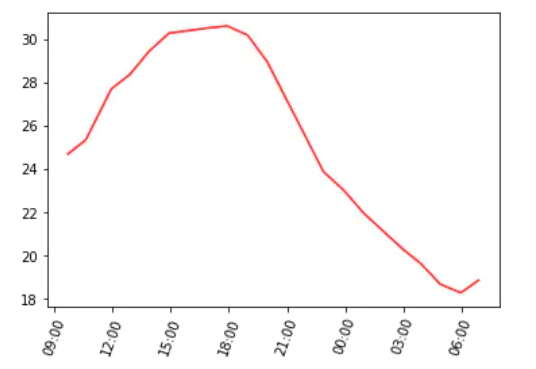 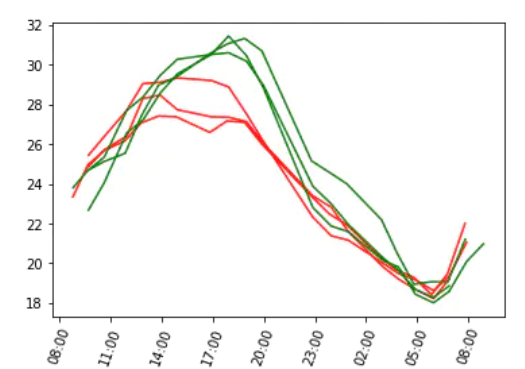 We can do in-depth research along this direction, collect the highest temperature and lowest temperature in 10 cities, and use a linear graph to represent the relationship between the temperature maximum point and the distance from the sea. 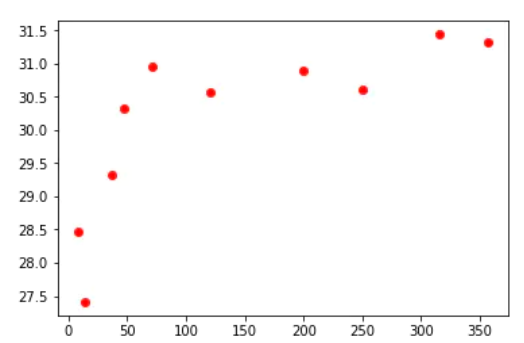 As shown in the figure, the assumption that the ocean has a certain impact on meteorological data is correct (at least for one day). Moreover, it can be found from the figure that the impact of the ocean decays rapidly. 60 ~ 70 kilometers away from the sea, the temperature has climbed to a high level.

(this code will run for a long time) 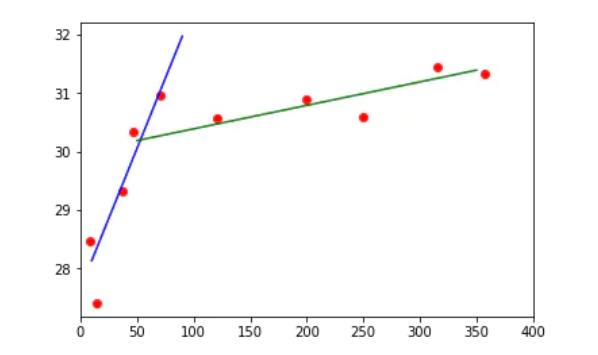 As can be seen above, within 60 kilometers from the sea, the temperature rises rapidly, from 28 degrees to 31 degrees, and then the growth rate gradually eases (if it continues to grow), and there will be a slight increase in the longer distance. These two trends can be represented by two straight lines, and the expression of the straight line is:

Investigate the humidity trend of three offshore cities and three inland cities on the same day. 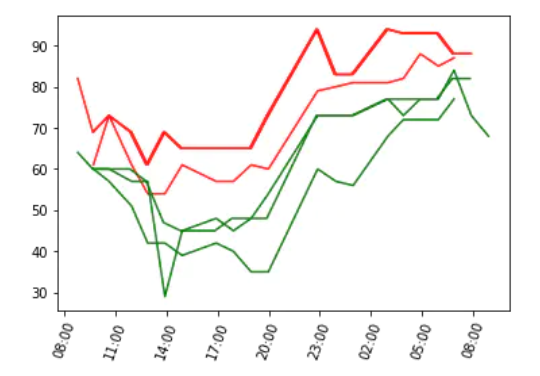 From the picture, it seems that the humidity in offshore cities is greater than that in inland cities, and the humidity difference throughout the day is about 20%.

In the collected meteorological data of each city, the following two are related to wind:

Analysis of the data shows that the wind speed is not only associated with the time period of a day, but also with a value between 0! 360 degrees. (each measurement contains the direction of the wind.)

For wind data, making it into a linear graph is not the best choice. Here, try to make a scatter diagram: 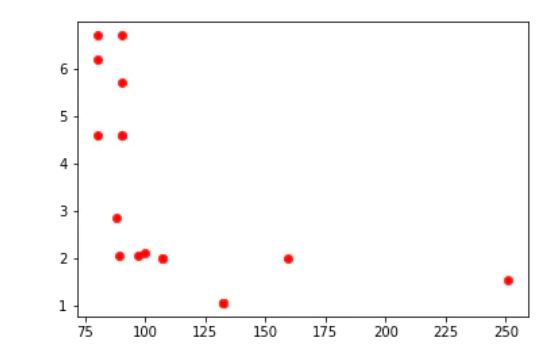 But the chart is not strong enough. 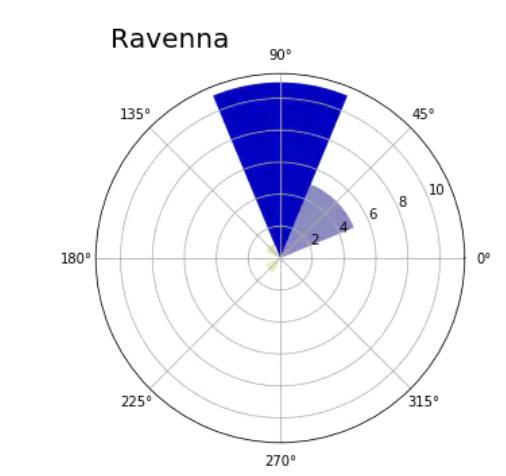 After defining the showRoseWind() function, it is also very simple to view the wind direction of other cities. 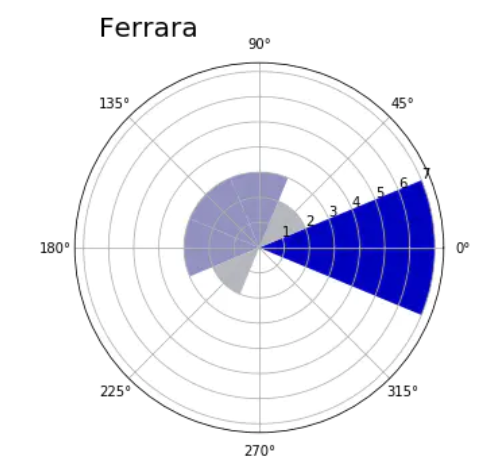 Even other data related to wind speed can be represented by polar map.

Define RoseWind_Speed function to calculate the average wind speed of each of the eight bin elements divided into 360 degree range. 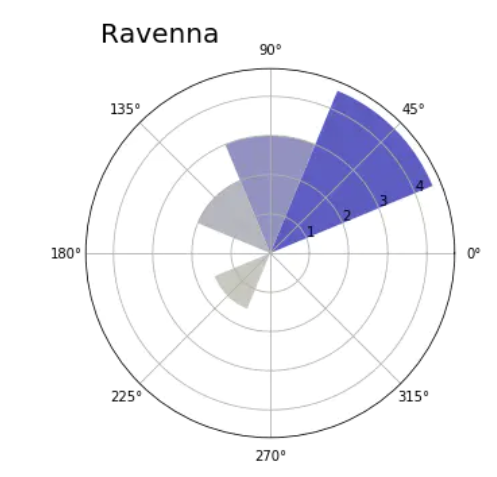 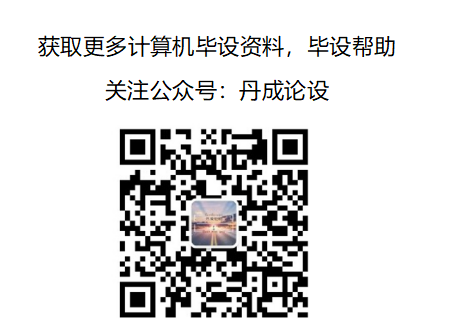