Hello, my friends. I've worked hard this time to bring you a project that has been absolutely fruitful.
The analysis is in place. It is also the first time to write such a long article. I look forward to your feedback ✨✨

This article is right Stop B Shangsi Valley greedy snake project Complete parsing of.
The original video is very good for TypeScript. It is recommended to watch it when you have time. For small partners with insufficient time
The purpose of this article is to let everyone get a big harvest in less time.
The construction of the project environment is a difficulty. If the partners can't understand it, they can study the video to ensure that relevant knowledge points will be mentioned in the video. This is very helpful for the code writing process, but it will not affect the output of the final code. (it means that if you can't understand it, just throw it up with my integrated code).
You can leave a message directly in the comment area or send a private letter. I'll send you a complete project directly for comparative research.

VSCode is used to write the program.
You need to have a general knowledge of HTML, CSS and JavaScript.
For typescript, node JS has a preliminary understanding.
Master preprocessor less
The packaging tool webpack collates the code
The project will not be compatible with old browsers. Try to use chrome browser to verify the effect

There are three class objects: snake, food and scene. And set the control module
To prepare four js sub modules, finally set up an index module for integration 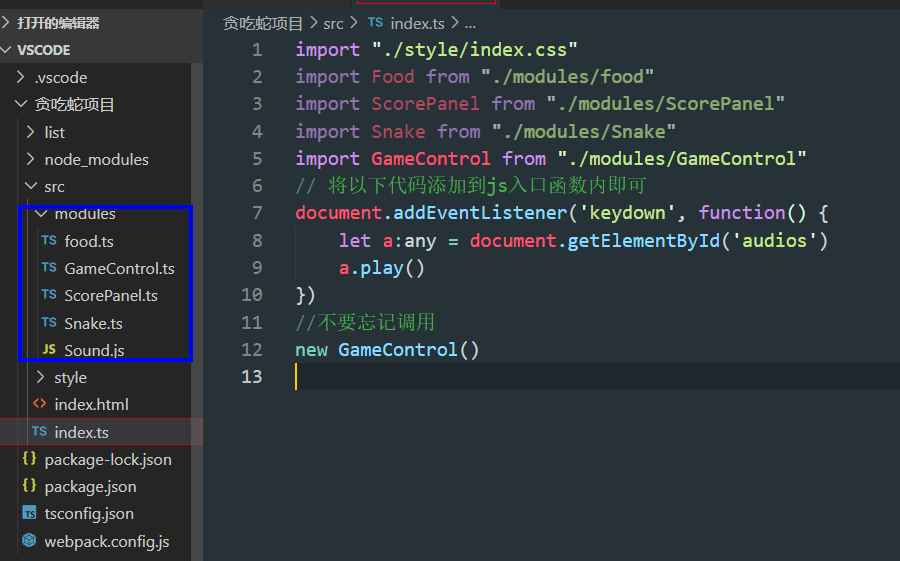 Sound.js is the BGM I set. You can also set one as an ornament

Style and structure:
1. It has a long and wide container, which is divided into the scene of Snake Movement and the upper and lower plates of the scoreboard
2. Set the boundary line in the scene where the snake moves
3. The score board records the score and level of food eaten by the snake (the higher the level, the faster the snake speed)
Logic:
1. When the snake eats food, the score will increase by one point, and each score level will increase by one level
2. There is an upper limit for the grade
3. The level is related to the moving speed of the snake

Style and structure: in a scene where snakes move
Logic:
1. The start is automatically generated at any position in the scene
2. After the snake eats it, it disappears and refreshes in a new position

Style and structure:
1. The snake is in the moving scene as a whole
2. The snake is divided into two parts: the head and the body
Logic:
1. At the beginning, only the snake's head, and the snake's body rises by one section every time it eats food
2. The snake head touches his body or the boundary line in the scene module. The game ends
3. The snake can only change its direction and can't stop.

The above are the general requirements to be realized. The author gives some optimization directions here, which you can realize by yourself:
1. Beautification of snake, food, scene and page
2. Add the pause function,
3. Add BGM, sound effects, etc
4. Scene complexity improvement: such as randomly generating ground spikes, dynamically adjusting scene size, etc
5. Press the space to build the acceleration function
6. Add automatic restart function
7. With the improvement of scores, encouraging words appear, death appears, and the game end text style appears
8. Change to bean eater

1. Configuration file of TS to JS

main points:
1. We want to create a project named tsconfig JSON file as configuration file
2. Its function is to convert all our ts files under the project into js files when we open the project in the form of integrated terminal and enter the tsc instruction.
3. This document mainly specifies some specifications for ts to translate js
4. If you do not write anything, you can just create this file, because the tsc command cannot be used without creating this file.
5. The TSC command can only be compiled once. tsc -w means continuous monitoring and will be compiled automatically later
6. It is not necessary to compile with tsc command when using webpack. As will be discussed below

In node Download node.js from the official website JS into the same hard disk as the project,
The effects are as follows:

And suggest node_ Copy a copy of the modules folder and put it into the project
main points:
1. We need to pass node JS download webpack and other modules
2. The network speed of domestic downloads may be slow, so you can try to use some image servers to download.

main points:
1. Ensure your node JS installed
2. Right click the project in vscade, select open in the integration terminal and enter the code npm init -y for project initialization. Generally, a preliminary package will be generated in your project at this time JSON file, and then we further improve it
3. The json file cannot write comments. Please delete my comments when pasting the code
4. Input the instruction NPM i - D webpack cli typescript TS loader in the integration terminal to download relevant dependencies (if you can see that the dependencies you downloaded are updated in depDependencies of package.json, it indicates that the download is successful). i means install download, and - D means downloaded as a dependency
5. Continue to input NPM I - D CSS loader and other dependencies, which are useful later
6. Please pay attention to the "build": "webpack" key value pair in the scripts in the above code. This setting shows that we can use the code of npm run build to enable the webpack packaging tool (see 15 minutes to 20 minutes in video 09 for details)

main points:
1. Finally, the related configuration of the webpack packaging tool, also named a webpack config. js
And paste the above code
2. Since the use of webpack is not the focus of this article, I have made notes on several important configurations. Interested partners can refer to video 09-11
3. What is put in output is the file after packaged output

1. First of all, remember to clear the default style of the browser and catch a lot of it on the Internet.
2. It was originally written with the less preprocessor and then translated into CSS. Here, it is directly given to the translated CSS
3. In terms of style, just note that the length and width are multiples of 10px, because the number of displacement cells behind the snake is 10px by default.
4. In this CSS style, by default, the snake head is centered at the beginning and the food position is fixed

At this time, the basic style of the page has been built, as shown in the following figure: 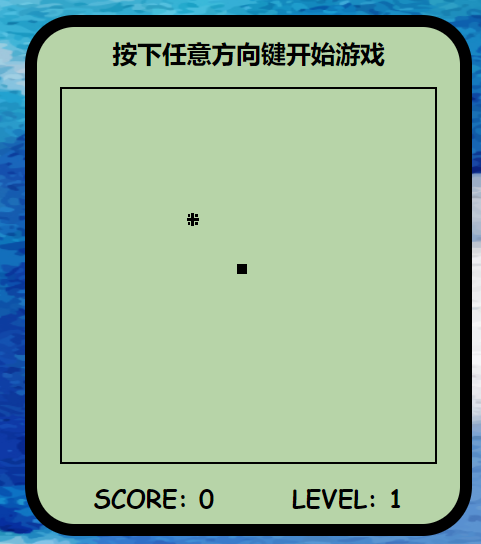 Now, as long as we code the logic of several modules according to the requirements in the project analysis.
But first we need to write it more rigorously in ts language.
First of all, we should understand that the class name {} is to build an object template in which we can write some properties and methods, so that when other js files call the template object, we can create an object that conforms to the template specification. You can analogy constructors and create instance objects

main points:
1. We set strict mode when configuring typescript, so
this.element = document.getElementById('food')! If we don't add! It will make the program not sure whether we will get food and report an error
2. It will not be mentioned later. All the codes in the constructor method will be executed once when the template object is instantiated, that is, we use the random number random. When the page is just refreshed, the food will not be in a fixed position as defined in css, but we call the code here for a random refresh at the beginning. Make the game more real.
3. The get() method is prepared to obtain the specific location of food in the control module at any time
4. The change() method is to refresh food at random
5. This will not be mentioned later. The export default Food code must be added at the end. The purpose is to expose the food template object to the global, otherwise other modules cannot reference it

main points:
1. Two methods are required, and the score and level can be improved by calling
2. We have set the upper limit of the level to no more than ten levels, which can be modified according to your preference
3. If you can roughly understand the food module, the scoreboard module is not difficult to understand

This is the most complex module in logic, but most of them are annotated. If you get it done, it's not far from success!

main points:
1. Four new methods are added: check whether the food is eaten, run() keyboard controls the movement of snake head, change the text in the page to game start (embellishment) and init() press any key to start the game.
2. this object in init refers to who it is. Please study it by yourself. In addition, it is quite clear in the video

Make a final summary of the above modules

Right click the project to open it in the form of integrated terminal, enter the command npm run build, and then press enter,
The purpose is to use the instructions of webpack to package it and output it where we want.
As shown in the figure below, the integration is basically successful.

webpack will help you integrate all js modules together, and then automatically reference it to your html file. As follows: list is where I package the output

We can start playing by opening html files with a browser!! 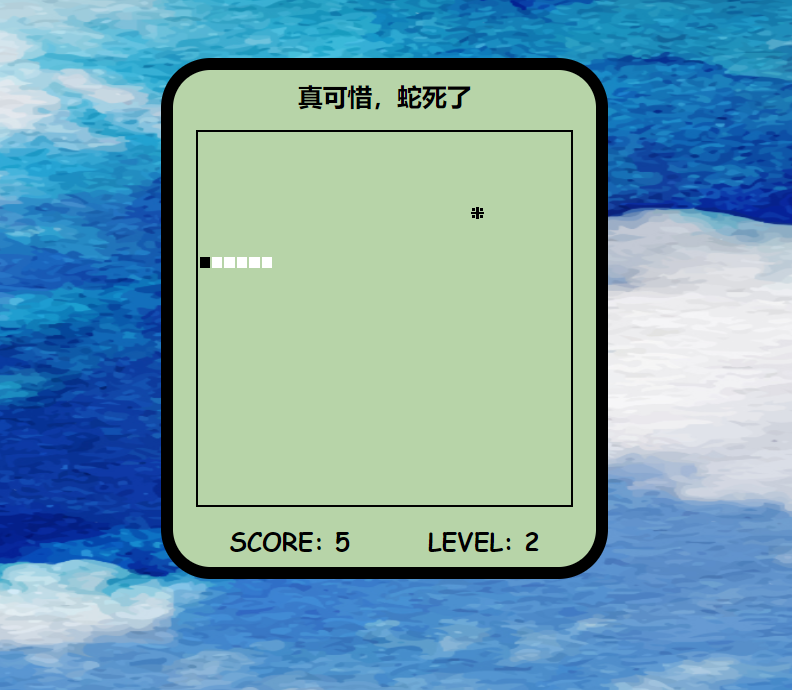 It's the first time to write such a long article. It's all drawn here. For the sake of such hard codewords, you little friends can't praise too much!!!
(～￣▽￣)～

Basic knowledge of JavaScript (step by step and orderly)

Why is jQuery classic in the front end? Light of the times)