[HashMap] some interview questions about HashMap

Tell me about the internal data structure of HashMap? 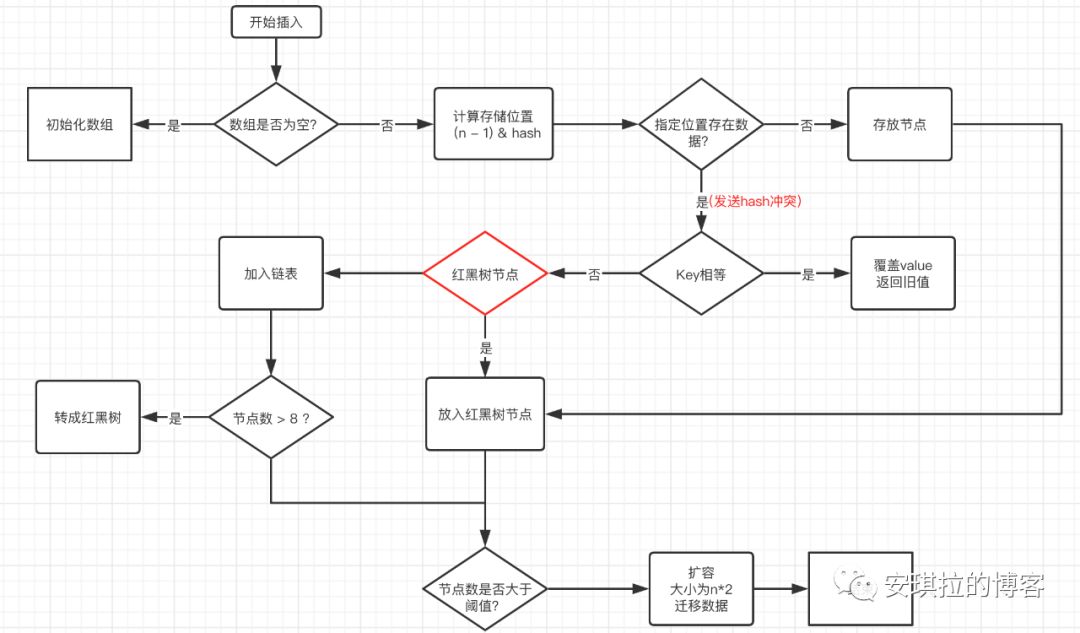 Initialization of HashMap. How does HashMap set the initial capacity?

When it comes to hash function, do you know how to design the hash function of HashMap? Why is it so designed?

The hash function first obtains the hashcode passing through the key, which is a 32-bit int value, and then makes the high 16 bits and low 16 bits of the hashcode XOR.

hash function is also called disturbance function. There are two reasons for this design:

Why can the high 16 bit and low 16 bit XOR of hashcode reduce hash collision? Can the hash function directly use the hashcode of the key?

Because key The hashcode() function calls the hash function of the key value type and returns the int type hash value. The int value range is - 2147483648 ~ 2147483647, which adds up to about 4 billion mapping space. As long as the hash function is mapped evenly and loosely, it is difficult to collide in general applications. But the problem is that an array with a length of 4 billion can't fit into memory. You think, if the initial size of the HashMap array is only 16, you need to modulo the length of the array before using it, and the remainder can be used to access the array subscript.

The modular operation in the source code is to do an "and" operation on the hash value and array length - 1. The bit operation is faster than the% operation.

This also explains why the array length of HashMap should take an integer power of 2. Because this (array length - 1) is exactly equivalent to a "low mask". The result of the and operation is that all the high bits of the hash value return to zero, and only the low bits are reserved for array subscript access. Take the initial length 16 as an example, 16-1 = 15. Binary means 00000000 00000000 00001111. And a hash value. The result is to intercept the lowest four digit value.

JDK1.8 optimized the hash function. Is there any other optimization in 1.8?

1.8 there are three main optimizations:

Tell me why we should do these optimizations?

1.7 call the transfer code for capacity expansion, as shown below:

Take 1.8 as an example. When thread A executes to line 6 of the following code and determines that the index position is empty, it just hangs. Thread B starts to execute line 7 and write node data to the index position. At this time, thread A recovers the site and performs the assignment operation to overwrite the data of thread A.

In addition, line 38 + + size will also cause problems such as simultaneous capacity expansion of multiple threads.

How do you usually solve this thread unsafe problem?

There are hashtables and collections in Java Synchronized Map and concurrent HashMap can realize thread safe Map.

Do you know the implementation principle of segment lock of ConcurrentHashMap?

The ConcurrentHashMap member variable is decorated with volatile to avoid instruction reordering and ensure memory visibility. In addition, CAS operation and synchronized are used to realize assignment operation. Multithreading operation will only lock the node of the current operation index.

Because the author designed it like this, oh, no, because after calculation, under the condition of reasonable hash function design, the probability of 8 hash collisions is 6 parts per million.. Because 8 is enough. As for why it turns back to 6, if the number of hash collisions hovers around 8, the conversion of linked list and red black tree will always occur. In order to prevent this from happening.

Are the internal nodes of HashMap orderly? Is there an orderly Map?

HashMap is unordered and inserted randomly according to the hash value. LinkedHashMap and TreeMap are ordered maps

How does LinkedHashMap achieve order?

LinkedHashMap internally maintains a single linked list with head and tail nodes. At the same time, LinkedHashMap Node Entry not only inherits the Node attribute of HashMap, but also before and after are used to identify the pre Node and post Node. You can sort by insertion order or access order.

Tell me about how TreeMap realizes order?