Usually, large Hadoop clusters are distributed on many racks. In this case,

HDFS cannot automatically judge the network topology of each DataNode in the cluster. This rack awareness requires an executable file (or script) defined by the net.topology.script.file.name attribute. The file provides the mapping relationship between the IP address of the DataNode and the rack rackid. Through this mapping relationship, NameNode obtains the rack rackids of each DataNode machine in the cluster. If topology.script.file.name is not set, the IP address of each DataNode will be mapped to default rack by default, that is, the same rack.

In order to obtain the rack rack rack ID, you can write a small script to define the IP address (or DNS domain name) of the DataNode, and print the desired rack rack rack ID to the standard output stdout

The script must be specified in the configuration file hadoop-site.xml through the attribute 'net.topology.script.file.name'. 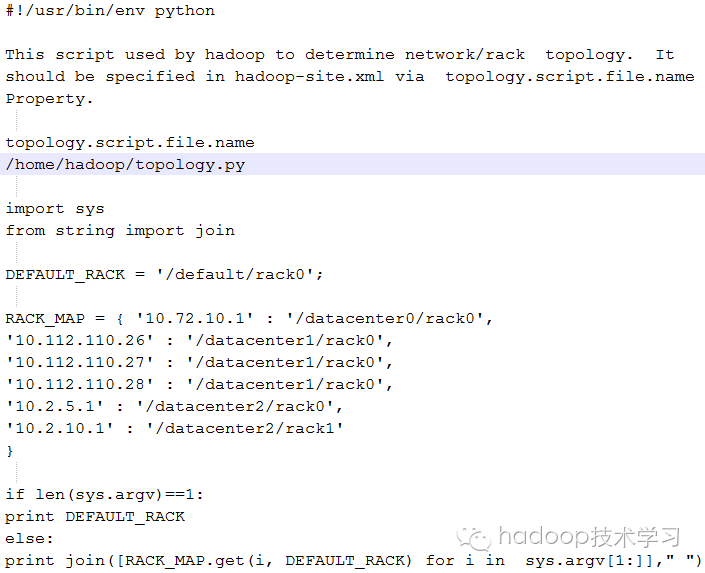 You also need to write a JAVA class. An example is as follows:

Print the above Java classes into jar packages and add execution permissions; Then put it in $Hadoop_ Run in the home / lib directory.

With rack awareness, NameNode can draw the DataNode network topology diagram shown in the above figure. D1 and R1 are switches, and the bottom layer is DataNode. Then the rackid of H1 = / D1 / R1 / H1, the parent of H1 is R1, and the parent of R1 is D1. These rack rackid information can be configured through net.topology.script.file.name. With these rack rackid information, you can calculate the distance between any two datanodes.

If there are more copies, they will be placed randomly subject to the following restrictions.

When data reading occurs, the NameNode node first checks whether the client is located in the cluster. If so, you can determine which DataNode node sends the data blocks it needs to the client according to the near to far priority. In other words, for nodes with the same data block copy, the nodes close to the client in the network topology will respond first.

Hadoop's replica placement strategy makes a good balance between reliability (block s in different racks) and bandwidth (a pipeline only needs to cross one network node). 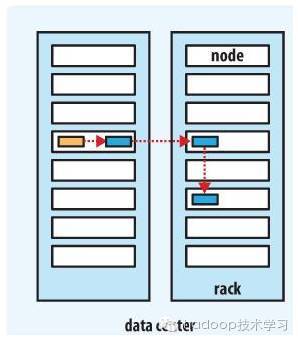