The following is an overview of the official documents:

When studying Hongmeng, I found that many things in it can be linked to Android, and the Ability is the first one. From the official overview, it should be linked to the concept of components. There are four major components in Android. In Hongmeng, it can provide many capabilities for development.

Ability is an abstraction, which includes two categories, FA and PA. let's see their differences:

Don't make complaints about it. After all, it's great to see the official technical documents of Chinese. 😆

The configuration file of Hongmeng application is config JSON, if you need to register an Ability, you need to specify it. The "type" field is used to specify the Ability type. The values include "page", "data" and "service". The format is as follows:

After reading the overview, I feel that there are only three things to learn: Page Ability, Service Ability and Data Ability.

But I read the official documents and found that things are not so simple: 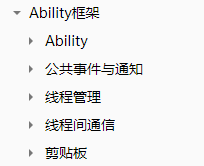 What？ Ability is a framework. In addition to ability itself, it also includes event notification, thread processing and clipboard?
Good guy, I learned an Ability, which is equivalent to directly learning a Hongmeng application development.
This article should not explain so many things, mainly FA and PA. as for the following, I will learn from them 🙃

Page Ability is a page. Its instance is a page. A page can contain one or more AbilitySlice, which is the Ability fragment, as shown in the following figure: 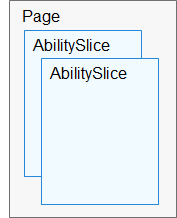 Hongmeng supports jumping between different pages and specifying specific AbilitySlice to jump to a Page. Of course, Page can also display UI without including AbilitySlice. The relationship between Activity and Fragment is the same.

If you need to change the default displayed AbilitySlice, you can configure a routing rule for it through the following methods:

However, this method needs to add some parameters, which need to be in config Register in JSON:

Look at the following code. Other pages can display the specific AbilitySlice by default when opening the Page through Intent:

The state machine is as follows: 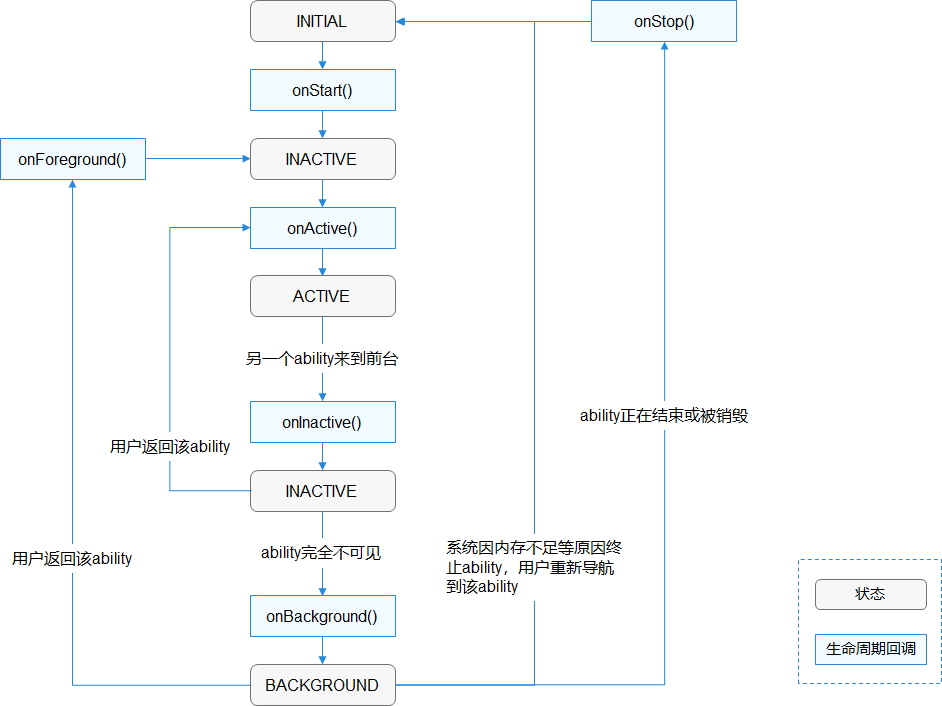 In addition, you must override the onStart() method of AbilitySlice and set the page through setUIContent():

2.4 navigation in the same Page

If you want to bring the result when returning from the AbilitySlice of the navigation target, you need to use presenterForResult(), bring the requestCode, and rewrite the onResult() callback:

When presenter() is called, the specified AbilitySlice instance has been put on the stack, and the AbilitySlice above this instance in the stack will be out of the stack and terminate its life cycle.

AbilitySlice is an internal unit of a Page and is exposed in the form of an Action.

The navigation between pages uses the startAbility() / startAbilityForResult() method to navigate, and the callback to get the returned result is onAbilityResult(). setResult() in Ability can set the return result.

Cross device migration supports the migration of pages between different devices of the same user, that is, to transfer A Page from device A to device B, which is an embodiment of the interconnection of all things. The steps are roughly three steps:

After implementing the interface of IAbilityContinuation, you can call continueAbility() / continueAbilityReversibly to request migration within the life cycle, and the latter can fetch:

The process of migrating from device A to device B is as follows:

If continueabilityreversible is called earlier, the source device can call reverseContinueAbility to initiate fetching after the migration is completed:

The specific process is not shown here, which is similar to the migration process.

Service is a single instance. There is only one instance of a service on a device. A service can bind multiple capabilities. The service can exit only after all the bound capabilities exit.
Theoretically, it functions the same as the Service component of Android. In this way, Ability is more like a context. 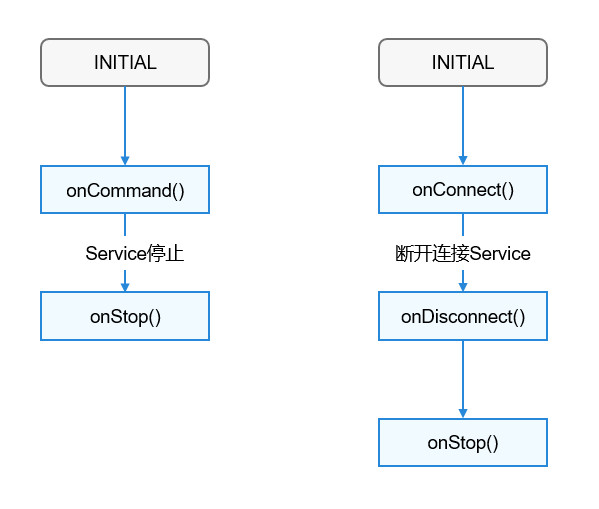 It has two ways to start

At the same time, it needs to be in config Register in JSON:

Start a Service capability through startAbility(), which can be started by passing in Intent, and can support local or remote services

Three messages can be passed in through Intent:

The code to start the local device Service is as follows:

If the Service needs to interact with the Service capability of Page or other applications, it must create a Connection for Connection, so that other capabilities can connect to it through the connectcapability () method.

When using connectAbility, you need to pass in the examples of Intent and IAblityConnection of the target Service. It has two methods: callback for successful connection and callback for abnormal death, as shown below:

The code for connecting to the Service needs to bring the Connection:

At the same time, when the Service needs onConnect(), return IRemoteObject to pass the IPC channel. Hongmeng provides a default implementation. You can create this channel by inheriting LocalRemoteObject, and then send it back, as shown below:

Service generally runs in the background, so it has low priority and is easy to be recycled.

However, in some scenarios (such as file download), users want to keep running all the time, so they need to use the foreground Service. The foreground Service will always keep the running icon displayed in the status bar, that is, it is bound to the notification

To use the foreground Service, you only need the following steps:

backgroundModes indicates the background service type. This tag is only applicable to service capability. The values are as follows:

The APIs provided by Data are URIs to identify a specific Data. The URI of HarmonyOS is based on the general URI standard, and the format is as follows:

Data capability is used to receive requests sent by other applications, so it provides an access interface.

In the project directory, click empty Data capability and enter the name of Data to create a default datacapability

Operate the file through filedescriptor openFile (uri, uri, string mode). uri is the request target path passed in by the caller, and mode is the developer's operation option for the file. The optional methods include "r" (read-only), "w" (write only), "rw" (read-write), etc

To use the database, you need to connect to the database first.
The system will call the onStart() method to create a Data instance when the application starts. Therefore, in this method, the developer needs to create a database connection and obtain the connection object for subsequent operations.

The following is an example code for connecting to the database:

The following api is provided to add, delete, modify and query:

It should be noted that the database supports ORM. ValueBucket, like a Bundle, can pass parameters. For example, insert a piece of data into the database as follows:

Similar to Service, developers must register Data in the configuration file
Several attributes need to be paid attention to:

Developers can access the shared data provided by the current application or other applications through DataAbilityHelper.

If the Data that needs to be accessed declares permission, the permission to access this Data also needs to be declared in the configuration file

Create the DataAbilityHelper object by passing in a context

Intent is the carrier of information transfer between objects. 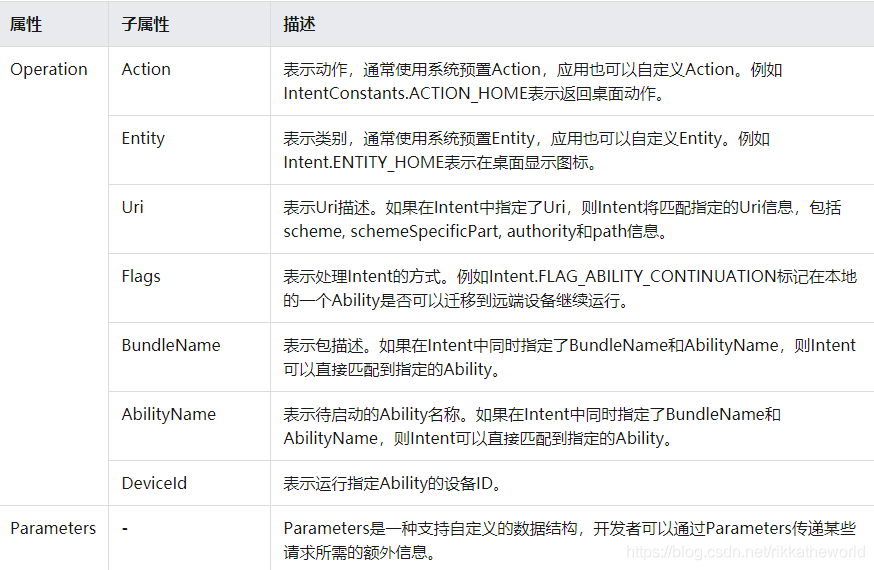 When Intent is used to initiate a request, it can be divided into two types according to different specified elements:

5.1 start the application according to the full name of Ability

Like Android Intent, you can use the capabilities provided by other applications by setting Action, regardless of which application.
For example, to open a weather query function, you only need to set an ACTION_QUERY_WEATHER is OK:

The processor, that is, the provider of weather query, needs to declare the ability to provide external information in the configuration file to facilitate the system to find itself:

Then support this action in Ability to navigate to this AbilitySlice:

Finally, process the request in the Ability and call the setResult() method to temporarily store the exchange result: