How to improve program performance with AIO Technology

This is an article about AIO. This article compares several common I/O models in detail, and introduces some API s related to AIO.

I translated the original English into this article. One is to study by yourself, and the other is to facilitate students who are not used to reading English materials to study.

Linux asynchronous I/O is a recent addition to the Linux kernel. This is a standard feature of the 2.6 kernel and appears as a patch in version 2.4. The basic idea behind AIO is to allow processes to start many I/O operations without blocking or waiting for any operation to complete. Then, after receiving the I/O completion notification later, the process can further query the I/O results.

Before going deep into AIO API, let's sort out different I/O models under Linux. The purpose of these models is to make you understand the differences between them. Figure 1 shows the synchronous and asynchronous models, as well as the blocking and non blocking models. 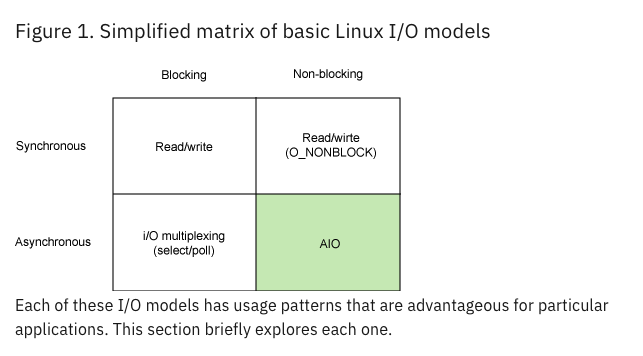 From the figure, we can see the location of AIO.

One of the most common models is the synchronous blocking I/O model. In this model, the user space application performs a system call, which causes blocking. This means that the application blocks until the system call is complete (data transfer complete or error). The caller application is in a state of waiting for a response, but does not consume CPU. From this point of view, it is fairly efficient.

Figure 2 shows the traditional blocking I/O model, which is also the most commonly used model in applications. Its behavior is well understood, and its use is effective for typical applications. When the read system call is invoked, the application blocks and the context switches to the kernel. Then start reading, and when the response returns (from the device being read), the data is moved to the user space buffer. The application is then unblocked (and the read call returns). 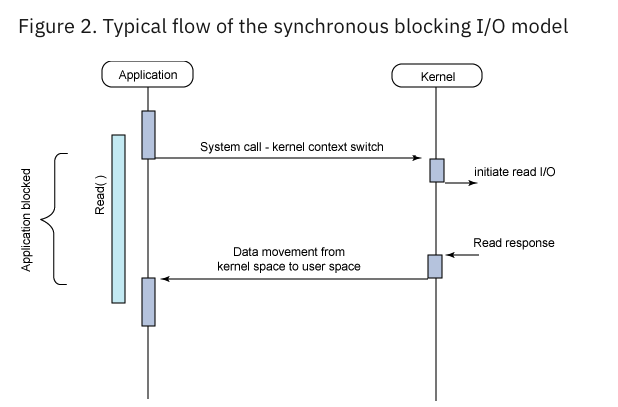 From an application perspective, the read operation lasts a long time. But it's actually just when the kernel is blocked.

A less efficient variant of synchronous blocking is synchronous non blocking I/O. In this model, the device opens in a non blocking manner. This means that the read operation may not complete the I/O immediately, but return an error code indicating that the command (EAGAIN or EWOULDBLOCK) cannot be satisfied immediately, as shown in Figure 3. 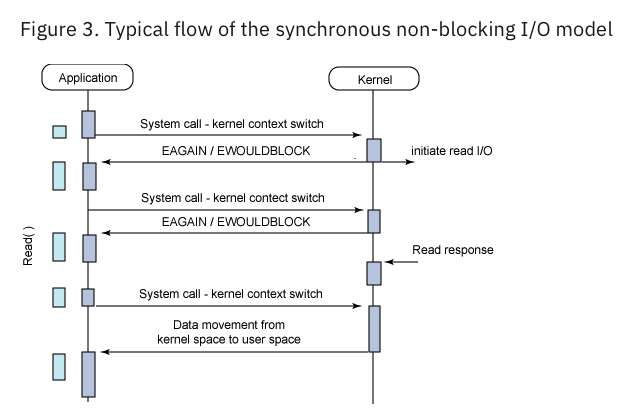 Non blocking means that I/O commands may not be satisfied immediately and require multiple calls from the application to wait for completion. This can lead to very low efficiency, because in many cases, the application must always wait for data to be available or try to do other work while executing commands in the kernel. As shown in Figure 3, this method introduces latency in I/O because any gap between when the data becomes available in the kernel and when the user calls read to return the data will reduce the overall data throughput. 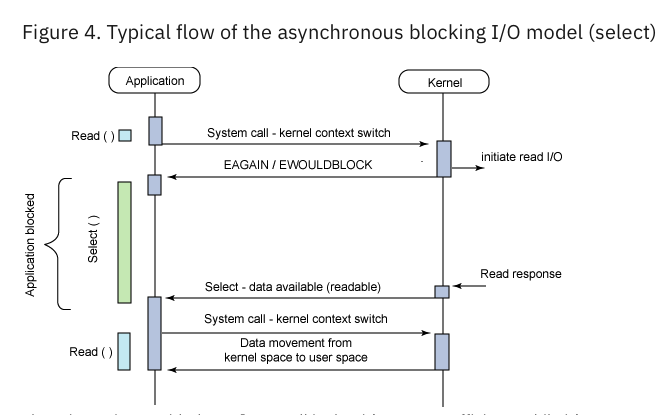 The main problem of the select call is its low efficiency. Although it is a model of asynchronous notification, it is not recommended for high-performance I/O.

Finally, asynchronous non blocking I/O model is a model of I/O overlapping processing. The read request returns immediately, indicating that the read was started successfully. The application can then perform other processing when the background read operation is completed. When the read response arrives, a signal or thread based callback can be generated to complete the I/O operation. 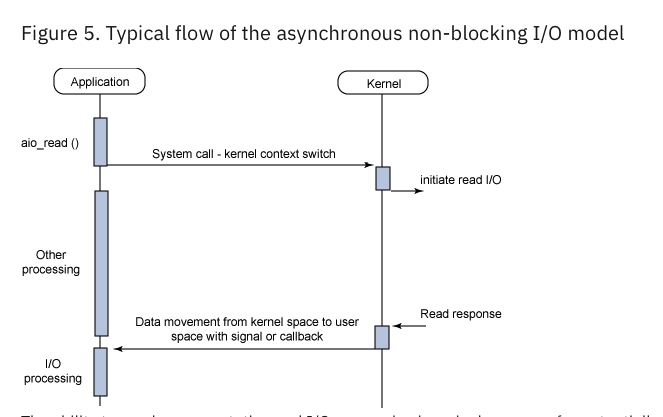 The ability to overlap calculations and make multiple I/O requests in a single process comes from, taking advantage of the gap between processing speed and I/O speed. When one or more slow I/O requests hang, the CPU can perform other tasks, or more commonly, operate on the completed I/O when starting other I/O.

The next section will take a closer look at this model and its API.

The select function (asynchronous blocking I/O) provides functions similar to AIO, except that it is still blocked when obtaining results.

This section explores the asynchronous I/O model of Linux to help you understand how to apply it in your applications.

AIO first entered the Linux kernel in 2.5 and is now a standard feature of the 2.6 production kernel.

In the traditional I/O model, there is an I/O channel identified by a unique handle. In UNIX ® In, these are called file descriptors (the same for files, pipes, sockets, etc.). In the blocking I/O model, you start the transmission, and the system call returns when the transmission is completed or an error occurs.

In the asynchronous non blocking I/O model, multiple transmissions can be started at the same time. This requires a unique context for each transmission so that it can be identified when the transmission is complete. In AIO, a structure called aiocb (AIOI/O control block) plays this role. This structure contains all the information about the transmission, including the user buffer of the data. When an I/O notification (completion) occurs, an aiocb structure is provided to uniquely identify the completed I/O. The API section of the next chapter shows how to do this.

Each of these API functions uses the aiocb structure to start or check. This structure has many member variables, and the following listing 1 shows only the necessary elements.

The sigevent structure tells AIO what to do when I/O is completed. This structure will be discussed later. Now let's look at how the various API functions of AIO work and how to use them.

aio_ The read function returns immediately after the request is queued. The return value is zero on success and - 1 on error, where errno is defined.

To perform a read, the application must initialize the aiocb structure. The following example illustrates populating the aiocb request structure and using aio_read executes an asynchronous read request (ignoring the notification temporarily). It also shows AIO_ The use of the error function will be explained later.

After opening the file from which you want to read data, clear the aiocb structure and allocate a data buffer.

The reference to the data buffer is placed in aio_buf. The buffer size is then initialized to aio_nbytes. aio_offset is set to zero (the first offset in the file). Set the file descriptor you want to read from to aio_fildes. After setting these fields, call aio_. Read requests a read. You can then call aio_error to determine AIO_ Status of read. As long as the status is EINPROGRESS, it indicates that it has not been completed. Otherwise, the request will either succeed or fail.

Here's a look at the similarities to reading from a file using standard library functions. Except AIO_ In addition to the asynchronous feature of read, another difference is to set the read offset. In a typical read call, the offset is maintained in the context of the file descriptor. For each read, the offset is updated so that subsequent reads process the next data block.

For each I/O request, you can't specify an asynchronous read offset, because you can't perform a specific read at the same time.

aio_error is used to determine the status of the request. Its prototype is:

The function may return the following states:

Only in AIO_ This function is not called until the error call determines that your request has been completed (success or error). aio_ The return value of return is the same as that of the read or write system call in the synchronization context (the number of bytes transferred or - 1 indicates an error).

aio_write is used to perform asynchronous write operations. Its prototype is:

aio_ The write function returns immediately, indicating that the request has been queued (0 for success, 1 for failure, and errno is set correctly).

This is similar to the read system call, but one behavioral difference is worth noting. Recall that offsets are important for read calls. However, for writes, the offset is only when o is not set_ Only important when used in the file context of the append option. If O is set_ Append, the offset is ignored and the data is appended to the end of the file. Otherwise, AIO_ The offset field determines the offset at which the data is written to the file.

You can use AIO_ The suspend function suspends (or blocks) the calling process until the asynchronous I/O request is completed, signaled, or an optional timeout occurs. The caller provides a list of aiocb references in which the completion of at least one will result in aio_suspend returns. aio_ The prototype of suspend function is:

aio_suspend is very simple to use. Provide a list of aiocb references. If either of them is completed, the call returns 0. Otherwise, - 1 is returned, indicating that an error has occurred. See the following example:

If to aio_suspend provides timeout and returns - 1 if timeout occurs and errno contains EAGAIN.

aio_ The cancel function can cancel one or all I/O requests for a file descriptor. Its prototype is:

Finally, AIO provides a way to use lio_listioAPI function is a method to start multiple transfers at the same time. This function is important because it means you can start a lot of I/O (kernel context switching) in the context of a single system call. From a performance perspective, this is great and worth studying. lio_ The listio API function has the following prototypes:

The mode parameter can be LIO_WAIT or LIO_NOWAIT. LIO_WAIT blocks the call until all I/O is complete. LIO_NOWAIT returns after the operation is queued. The list parameter is the list referenced by aiocb. The maximum number of elements is defined by compo nent. Note that the element of the list may be NULL, lio_listio will ignore it. The sigevent reference defines the signal notification method when all I/O is completed.

Yes, Leo_ Listio's request is slightly different from a typical read or write because an operation must be specified. The following example illustrates this.

Read operation with lio_ AIO of read_ lio_ Specify in the opcode field. For write operations, use LIO_WRITE, but LIO_NOP is also valid for no operation.

Use signal for asynchronous notification

Interprocess communication (IPC) using signals is a traditional mechanism in UNIX, and AIO also supports it. In this example, the application defines a signal handler that is called when a specified signal occurs.

The application then specifies that the asynchronous request will signal when the request completes. As part of the signal context, specific aiocb requests are provided to track multiple potentially outstanding requests. The following example demonstrates this notification method.

In this example, the signal handler is set up to be used in AIO_ completion_ The SIGIO signal is captured in the handler function.

Then initialize aio_sigevent structure to raise SIGIO notification (specified by SIGEV_SIGNAL definition in sigev_notify). When the reading is completed, the signal handler starts from the Si of the signal_ Extract a specific aiocb from the value structure and check the error status and return status to determine that I/O is complete.

In terms of performance, the completion handler is an ideal place to continue I/O by requesting the next asynchronous transfer. In this way, when one transmission is completed, the next one starts immediately.

Another notification mechanism is system callback. This mechanism does not send a notification signal, but calls a function in user space for notification. This function is initialized into the sigevent structure in the aiocb reference to uniquely identify the specific request being completed. Here is an example:

In this example, sigev is used after the aiocb request is created_ Thread requests a thread callback as a notification method.

Then, specify a specific notification handler and load the context to pass to the handler (in this case, a reference to the aiocb request itself). In the handler, just convert the incoming sigval pointer and use the AIO function to verify the completion of the request.