How to solve the oversold problem of high price and high price?

How to solve the oversold problem of high price and high price?

A problem caused by second kill

Let's assume that there is only one item left, and num = 1 in the database;

But you will eventually find that only one thread succeeded in reducing inventory, and all the other 99 threads failed.

This is why the exclusive lock in MySQL works.

It is similar to that when I execute the update operation, this line is a transaction (exclusive lock is added by default). This line cannot be modified, read or written by any other thread

In addition, a business logic judgment of whether the number of num is greater than 0 should be added before executing the sql statement.
In mysql, the exclusive lock is actually added here, but the version number is also a way to solve oversold, but the version method is used to replace the function of the statement num > 0 in the database, and the judgment of num > 0 is placed in the business logic.
In fact, there is a slight difference between the two ways to solve oversold. Consider two threads. When the inventory quantity is 2, if the first method is adopted, both threads can execute successfully. In the second way, if the second thread executes the same sql and gets the same version value before the first thread commits the transaction (that is, thread 1 and thread 2 get the same version value), then only one thread between the two threads can reduce the number of libraries by one and execute successfully. The final inventory number is not 0, but 1.

This method adopts the version number method, which is actually the principle of CAS.

When updating directly, only one of them updates first and updates the version number at the same time.

Use the single thread of redis to pre reduce inventory.

When each user thread comes in, the key value will be reduced by 1. When it is reduced to 0, all the remaining requests will be rejected.

Then, only 100 threads will enter the subsequent operation. Therefore, there will be no oversold phenomenon.

This paper mainly introduces the second kill function of goods based on Redis. Let's talk about the general idea first. The general idea is to reduce the access to the database, cache the data into the Redis cache as much as possible, and get the data from the cache.

There is another way to write: 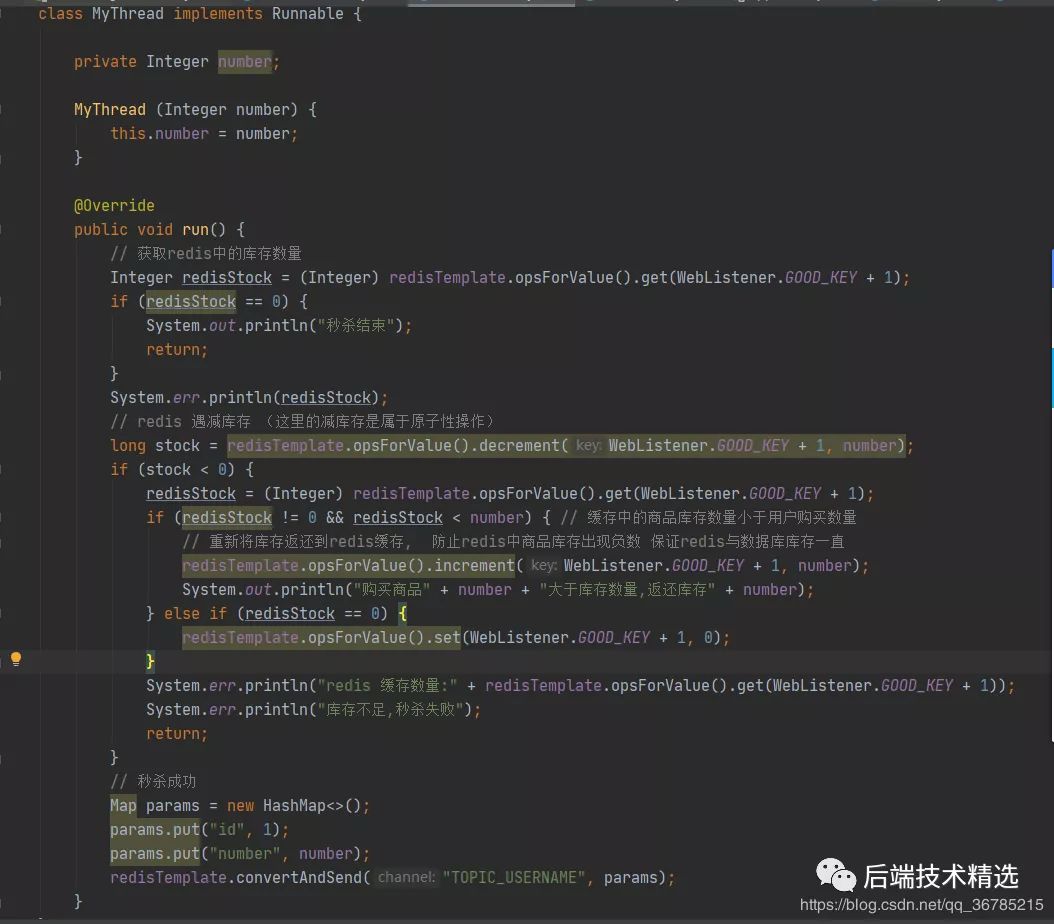 The increment operation in the redis api is used here to pre reduce the number of users' rush purchases, and judge whether the inventory in redis is greater than the number of users' rush purchases. If it is less than 0, the user will be directly prompted that the second kill fails, otherwise the second kill succeeds, enter the redis message queue and perform the database inventory creation operation.