The first play of single example mode -- lazy type
Lazy, this method can only be initialized when getInstance needs to be called, which has the advantage of saving memory space to some extent. But there is also a disadvantage that it is not safe in a multithreaded environment. The code is as follows: 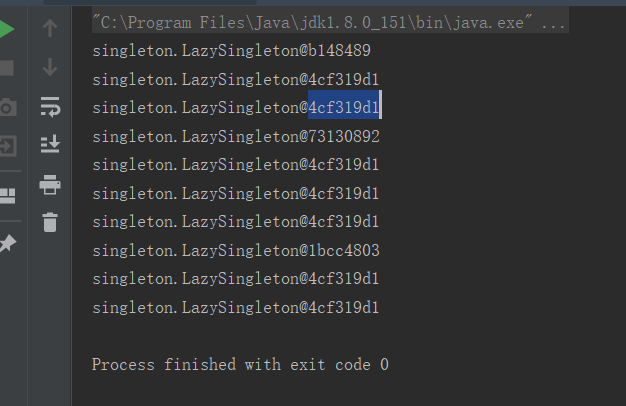 Although it is simple, we find that it is not secure (the address of the instance is obviously wrong).
The second bullet of single case mode -- double check lock mode
In fact, double check lock is the advanced version of lazy mode. You're not safe, so I'll make you safe. The code is as follows

The third bullet of single case mode -- starving Han mode
The starved man mode, as you can see by its name, is loaded directly on the first step, so as to avoid thread insecurity, but there will also be a memory problem. The code is as follows

The fourth bullet of singleton mode -- static inner class
Since the dislike starved mode does not have the function of lazy loading, the static internal classes can fully meet this function, which is not only lazy loading, but also safe. The code is as follows

The fifth bullet of singleton pattern -- Enumeration class
Although static inner class is very good, but I also dislike the code is too long, how to do??? Then use enumeration directly. Enumeration naturally has the feature of singleton. How refreshing.