In depth of Java thread pool: from design idea to source code interpretation

Why do I need a thread pool

We know that the common way to create a thread is new Thread(), and every time new Thread(), a thread will be re created, and the creation and destruction of threads will take time, which will not only consume system resources, but also reduce the stability of the system. In jdk1 There is an executor in the JUC package of 5, which can reuse the threads we create and will not create and destroy threads frequently.

No matter what it is, let's take a look at the time-consuming situation of using thread pool and new Thread():

For 100000 threads running at the same time, if using new takes time:

Time consuming to use thread pool:

In general, rational use of thread pool can bring the following benefits:

Let's first understand the idea of thread pool. Even if you don't know what thread pool is again, you won't tell you a bunch of thread pool parameters as soon as you come up. I tried many ideas to explain its design idea, but they are too official. However, when looking for information, I saw a very easy to understand description on my blog. It is described as follows. First imagine the production process of a factory:

There is a fixed group of workers in the factory, called formal workers, who complete the orders received by the factory. When orders increase, regular workers are already too busy, and the factory will temporarily pile up production raw materials in the warehouse, Wait until there are free workers (because the workers are idle, they will not take the initiative to handle the production tasks in the warehouse, so the dispatcher needs to dispatch in real time). What if the warehouse is full, and the orders are still increasing? The factory can only temporarily recruit a group of workers to cope with the production peak, and these workers will be dismissed after the peak, so they are called temporary workers. At that time, the temporary workers were also called after the recruitment was full (limited by the station limit, there is an upper limit on the number of temporary workers), the subsequent orders can only be reluctantly rejected.

And thread pool are mapped as follows:

getTask() is a method to schedule tasks in the task queue to idle threads, and then learn from the source code analysis.

After mapping, a thread pool is formed. The flow chart is as follows: 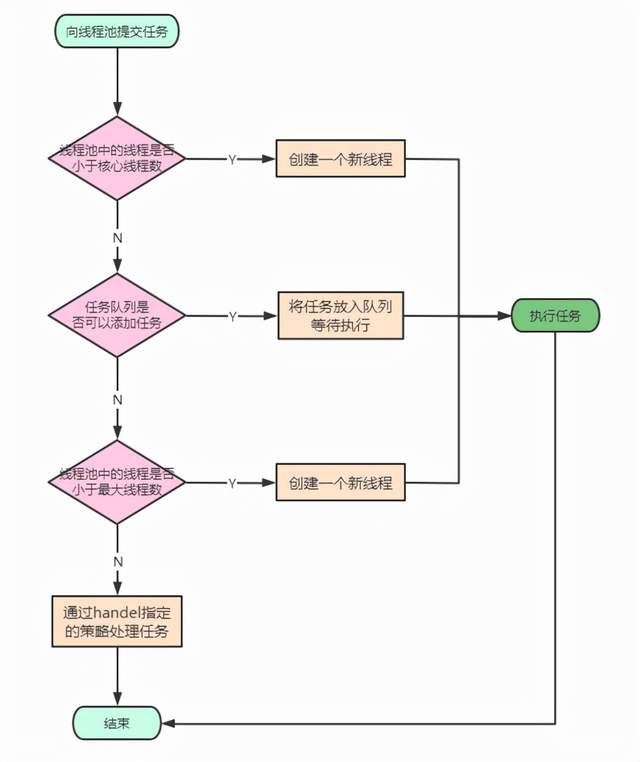 Parameters and usage of thread pool

The real implementation class of thread pool is ThreadPoolExecutor. The integration relationship of the class is as follows: 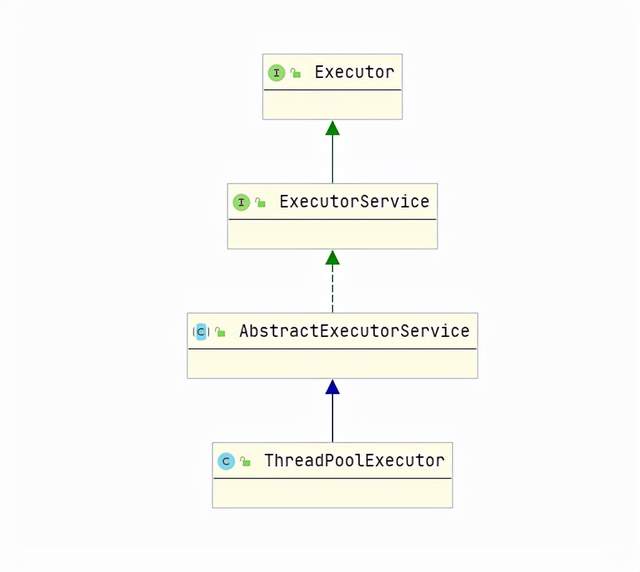 There are several construction methods of ThreadPoolExecutor. You can master the most important ones, including 7 parameters:

Two methods can be used to submit tasks to the thread pool: the execute() and submit() methods.

When three threads execute tasks through the thread pool, because there is only one core thread and the task queue is 1, when the third thread arrives, a new thread pool-1-thread-2 will be restarted to execute tasks.

Of course, someone here may ask whether the core thread will be greater than the maximum thread? Of course not. If corepoolsize > maximumpoolsize, an error will be reported directly when the program starts.

The task queue is implemented based on the blocking queue, that is, the producer consumer mode is adopted, and the {BlockingQueue} interface needs to be implemented in Java. However, Java has provided us with seven implementations of blocking queues:

The default thread name created by the thread factory is pool-m-thread-n, which is in the
Executors.defaultThreadFactory() can see:

We can also customize the thread name through {ThreadPoolExecutor}:

If you change the number of cycles of the above code to 4, an exception will be thrown
java.util.concurrent.RejectedExecutionException.

Executors, which provides a series of static factory methods for creating various types of thread pools, is based on ThreadPoolExecutor.

Features: the number of core threads is equal to the maximum number of threads, so there is no need for timeout. It is recycled immediately after execution. The blocking queue is unbounded, and any number of tasks can be put.

Scenario: applicable to tasks with known amount of tasks and relatively time-consuming.

You can create a thread pool for new threads as needed. If there are no existing threads available, create a new thread and add it to the pool. If there are threads that have been used but have not been destroyed, reuse the thread. Terminate and remove threads from the cache that have not been used for 60 seconds. Therefore, a thread pool that remains idle for a long time will not use any resources. This thread pool is flexible. For programs that perform many short-term asynchronous tasks, these thread pools can usually improve program performance.

Features: the number of core threads is 0, and the maximum number of threads is integer MAX_ Value, all of which are collected by idle threads after 60s.

Features: single thread pool. Multiple tasks are expected to be queued for execution. The number of threads is fixed to 1. When the number of tasks is more than 1, they will be queued in an unbounded queue. After the task is executed, the only thread will not be released.

Scenario: it is different from creating a single thread serial execution task. If the {new Thread} task fails to execute and terminates, there is no remedy, and a new Thread will be created in the thread pool to ensure the normal operation of the pool.

When using thread pool, I actually have some problems, such as how to create threads in thread pool? How is the task performed? How are tasks assigned? What happens after the thread is executed? Is it survival or death? When did you die? Why use blocking queues and so on. With these questions, let's read the source code. How to start reading the source code? Through the {execute() method of} ThreadPoolExecutor. The submit underlying layer also calls execute().

If less than, enter the addWorker method:

Worker is an internal class of ThreadPoolExecutor, which inherits AQS and implements Runnable.

It can be seen from the Worker's construction method that the thread attribute is created through this. Therefore, the creation of the core thread of the thread pool is mainly the "runWorker" method in the run method:

For the getTask() method, the tasks in the task queue are scheduled to idle threads. This method is very important. Why is it important? It involves the thread pool often asked by interviewers. How to ensure that the core thread will not be destroyed and the idle thread will be destroyed?

① For the code below getTask(), this logic is mostly for non core threads:

② Let's read this code in this way. When the number of working threads is greater than the core thread {corePoolSize, enter the second if statement in the} execute() method:

At this time, the total number of thread pools has exceeded ， corePoolSize ， but less than ， maximumPoolSize. When the task queue is full, non core threads will be added through ， addWorker(task,false).

In the case of high concurrency, redundant threads will certainly be generated, that is, in the case of ①, @ WC > maximumpoolsize. What about these redundant threads? Will they be recycled? If workqueue Poll ， if no valid task is obtained, the logic in ① is just opposite to ， addWorker(task,false). Reduce non core threads through CAS, so that the total number of working threads tends to ， corePoolSize.

For non core threads, if the task object obtained in the previous round of loop is "null", by default, @ allowCoreThreadTimeOut = false. Therefore, @ timed = true in getTask(). If the task is not obtained, then, @ timed out = true. This round of loop can easily meet the requirement that "timed & & timed out" is true, At this time, if #getTask() returns null, the Worker#runWorker() method will jump out of the loop, and then the #processWorkerExit() method will be executed to process the subsequent work, while the # Worker # corresponding to the non core thread will become a # free object waiting to be recycled by the JVM.

When allowCoreThreadTimeOut is set to true, the life cycle end logic of non core threads analyzed here will also apply to core threads.

This leads to an interview question: if there are multiple threads in the thread pool that do not get tasks at the same time, will they all be recycled?

For example, the number of core threads in the thread pool is 5, the maximum number of threads is 5, and the current number of working threads is 6 (6 > 5, which means that thread recycling can be triggered). If three threads timeout at the same time and fail to obtain tasks, will all three threads be recycled and destroyed?

Idea: the core of this problem is that multiple threads timeout at the same time and can't get the task. Under normal circumstances, the process of thread recycling will be triggered. However, we know that when the allowCoreThreadTimeOut variable is not set normally, the thread pool will maintain the number of core threads even if there is no task processing. If all three threads here are recycled, the number of threads will become 3, which does not meet the number of core threads. Therefore, we can get the answer first: not all threads will be recycled. At this time, the interviewer will certainly ask why?

According to the answer, it is not difficult to speculate that in order to prevent the problem of concurrent recycling, the process of thread recycling must have concurrency control.
compareAndDecrementWorkerCount(c) uses the CAS method. If CAS fails, continue to enter the next cycle and re judge.

Like the above example, one of the threads will fail CAS, and then re-enter the loop. It is found that the number of working threads is only 5 and timed = false. This thread will not be destroyed and can be blocked all the time. At this time, it will call} workqueue Take () blocks the task waiting for the next time, that is, the core thread will not die.

The core thread will not be destroyed because it calls the blocking method. The idle thread calls the timeout method and dies because it cannot get the task in the next execution.

In fact, this answer is OK, but it may show that you memorize octets, so you should answer that the core thread will not be destroyed not only because the blocking method is called, but also by using CAS.

It can also be concluded that getTask() returns null: 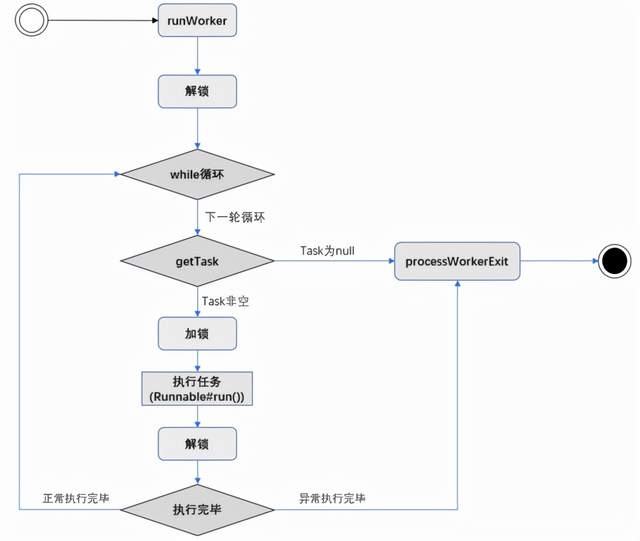 In the finally block of runWorker, after the task is executed, it needs to be processed. The working thread will not be truly terminated until it executes the {processWorkerExit() method. The method is as follows:

After processWorkerExit() is executed, it means that the life cycle of the worker thread is over.

1. How to create threads in a thread pool? How is the task performed?

It mainly consists of the {Worker} class and the} Worker#runWorker() method.

2. How are tasks assigned?

Refer to the getTask() method.

4. If multiple threads in the thread pool fail to get tasks at the same time, will they all be recycled?

5. Why use blocking queues?

When the number of active threads in the thread pool reaches the corePoolSize, the thread pool will submit subsequent tasks to the BlockingQueue (each task is a separate producer thread) and enter the blocking pair. The task thread in the column will wait() to release the cpu, so as to improve the cpu utilization.