Interviewer: the more detailed the snowflake algorithm, the better

According to Charles Knight of the National Center for atmospheric research, the average snowflake consists of about 10 ^ 19 water molecules. In the process of snowflake formation, different structural branches will be formed. Therefore, there are no two identical snowflakes in nature. Each snowflake has its own beautiful and unique shape. The snowflake algorithm indicates that the generated id is as unique as snowflake. snowflake is Twitter's open source distributed ID generation algorithm, and the result is a long ID. Its core idea is to use 41bit as the number of milliseconds, 10bit as the machine ID (five bits are the data center and five bit machine ID), 12bit as the serial number within milliseconds (meaning that each node can generate 4096 IDS per millisecond), and finally there is a symbol bit, which is always 0.

Snowflake algorithm is a 64 bit binary, which consists of four parts: 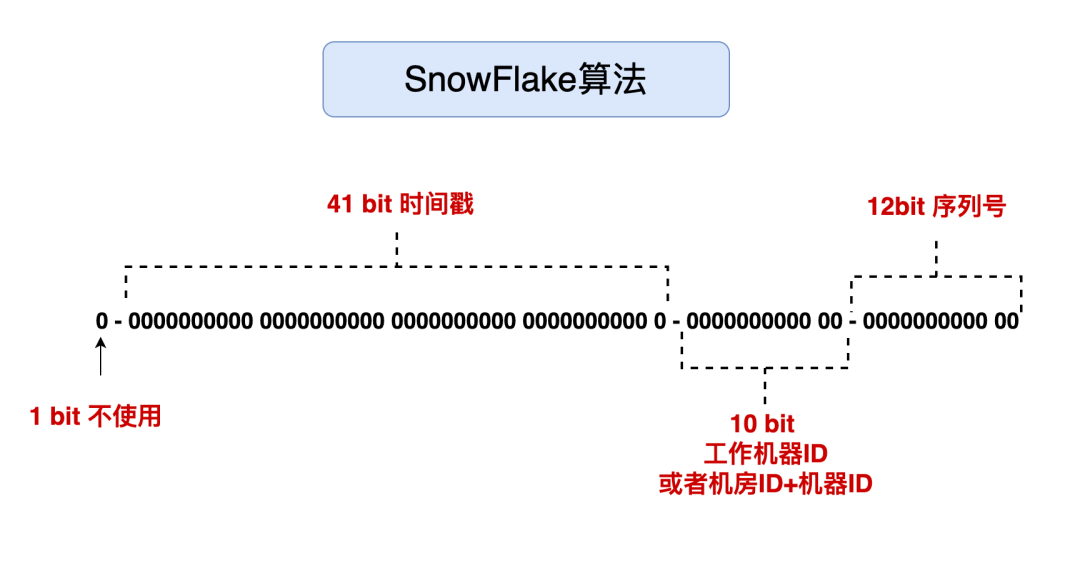 Since the 41 bit is a time stamp, our time calculation began in 1970 and can only be used for 69 years. In order not to waste, in fact, we can use the relative value of time, that is, taking the starting time of the project as the base time, and we can use 69 years in the future. The service for obtaining the unique ID requires high processing speed, so we all use bit operation and displacement operation. System can be used to obtain the current time currentTimeMillis().

When obtaining time, there may be a problem of time callback. What is time callback? That is, the time on the server suddenly goes back to the previous time.

In fact, Baidu and meituan have their own solutions to the problem of producing duplicate ID S caused by time callback. If you are interested, you can go and have a look. The following is not the information in their official website documents:

2. How to use the machine position?

Indicates how many values can be represented by x-bit binary, assuming that x is 3:

6. The accuracy is lost when the front end is directly used

If the front end directly uses the long type id generated by the server, the accuracy will be lost, because the Number in JS is 16 bits (referring to the decimal Number), while the longest Number calculated by the snowflake algorithm is 19 bits. At this time, String needs to be used as an intermediate conversion and output to the front end.

In fact, the snowflake algorithm depends on the consistency of time. If the time is dialed back, there may be problems. It is generally solved by using the extended bit. The time limit of 69 years can only be used. In fact, you can set more digits of the timestamp according to your own needs. For example, 42 digits can be used for 139 years, but many companies have to survive first. Of course, the snowflake algorithm is not a silver bullet. It also has disadvantages. It increases on a single machine, while multiple machines only increase roughly, not strictly.

There is no best design scheme, only suitable and inappropriate schemes.