Introduction to BertTiny and deployment of OpenVINO

bert is a language model technology applied in NLP field, and Transformer, Encoder and Decoder are its core technologies. The purpose of this blog is to teach you to get started bert quickly.

1.1 what problems can Bert solve

1. Combined with the context understanding semantics, it extracts all the referential relationships of a single word in the sentence in no order, and solves the problem of one-way information flow, which RNN\LSTM can't do.

2. Its advantage is to solve the problems of network bloated and slow calculation caused by stacking multi-layer LSTM.

The newly harvested millet this year is particularly delicious.

Bert's essence is to help understand the specific meaning of "Xiaomi" in the sentence combined with contextual semantics.

WORDTO NEC: text vectorization -- an expression of words and sentences that can be understood by the computer.

RNN\LSTM: basic network model, which can understand the semantics of text 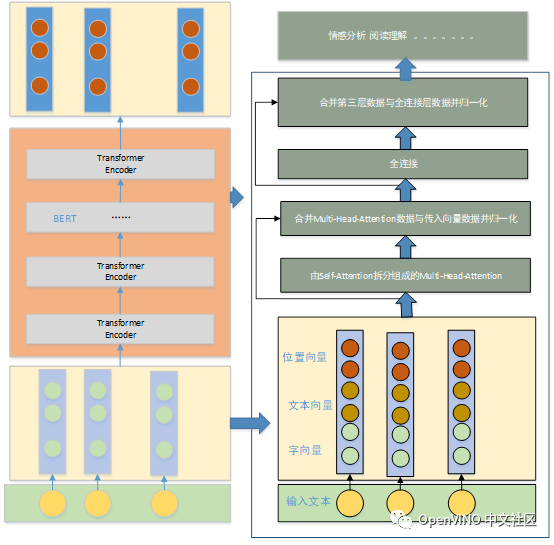 The vector representation unit includes: word vector, text vector and position vector. The function of position vector is to solve the timing problem.

Attention solves the problem that it cannot be executed in parallel, and achieves the effect of semantic expression at different levels through multi head mechanism. It is the core of transformer encoder.

The merging is completed by residual operation. Its purpose is to ensure that the network training effect will not deteriorate with the deepening of the network.

The purpose of normalization is to enhance the data,

Normalization is to normalize the data of hidden layer into standard normal distribution, which can accelerate the training speed and convergence.

The purpose of data merging by residual connection is to ensure that the main semantics are not lost after multi-layer feature extraction, so that the effect is better and better.

The application layer is mainly the specific application of feature data. The main scenes include: emotion analysis, reading comprehension, sequence annotation and so on.

Randomly cover up a certain proportion of words (tokens) in a sentence. The specific rules are as follows:

(3) 10% were randomly replaced with other words and sentences.

The mechanism of predicting whether the two sentences are context is to give the correct and wrong sentences respectively, and let the model compare and learn.

Through the joint training of Masked LM task and next sense prediction task, Bert model makes the vector representation of each word / word output by the model describe the overall information of the input text (single sentence or sentence pair) as comprehensively and accurately as possible, so as to provide better initial values of model parameters for subsequent fine-tuning tasks.

BERT, which is represented by Transformer's bidirectional encoder. Unlike other recent language representation models, BERT aims to pre train deep bidirectional representation by jointly adjusting the context in all layers. Therefore, the pre trained BERT representation can be fine tuned through an additional output layer, which is suitable for the construction of state-of-the-art models for a wide range of tasks, such as question and answer tasks and language reasoning, without significant structural modifications for specific tasks.

For comparison, the model size of BERTBASE is the same as that of OpenAI GPT. However, it is important that BERT Transformer uses bidirectional self attention, while GPT Transformer uses restricted self attention, where each token can only focus on the context to its left. It should be noted that in the literature, the bidirectional Transformer is usually called "Transformer encoder" in the literature, while the version focusing only on the left context is called "Transformer decoder" because it can be used for text generation. The comparison between BERT, OpenAI GPT and ELMo is shown in Figure 1 below.

And concatenation from right to left LSTM to generate the characteristics of downstream tasks. In the three models, only the BERT representation depends on the left and right context in all layers.

Large models such as BERT have powerful performance, but it is difficult to deploy to devices with limited computing power and memory. Therefore, researchers from Huazhong University of science and technology and Huawei Noah's Ark laboratory proposed TinyBERT, a knowledge distillation method specially designed for transformer based models. The size of the model is less than 1 / 7 of that of BERT, but the speed is more than 9 times that of BERT, and the performance has not decreased significantly. At present, the paper has been submitted to machine learning summit ICLR 2020. 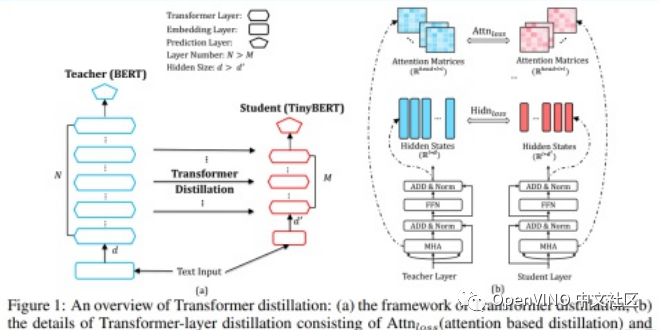 The above figure describes the process of bert knowledge distillation. The figure on the left summarizes the process of knowledge distillation as a whole: Teacher BERT on the left and Student TinyBERT on the right. The purpose of this paper is to transfer the knowledge learned by Teacher BERT to TinyBERT; The figure on the right describes the details of knowledge transfer. In the training process, the attention matrix and output of each transformer layer in Teacher BERT are selected as supervision information.

The second step is to clarify the method: we know that the BERT model proposed by Google is the baseline of all NLP tasks, almost sweeping all previous methods. Sequence annotation task and BERT source code( https://github.com/google-research/bert )The text categorization task (run_classifier.py) in is similar. So I decided to make changes based on this code to adapt it to the sequence annotation task.

Then we transformed the model into the IR model of OpenVINO. Let's do an experiment. Will this improve our reasoning speed.

Benchmark Tool is used to evaluate the performance of deep learning reasoning on supported devices. Here, the performance benchmark differences of different computing platforms are tested for CPU and GPU. The following is the operation of GPU to perform the test:

We found that the performance of the model on GPU is better. The specific data are shown in the table below:

There are eight steps to model reasoning using OpenVINO's information engine, as shown in the figure:

(2) Read model: read the model file into the instance object of Network class;

(4) Load model: load the model with set parameters into the computing hardware with LoadNetwork() method;

It is very convenient to convert the trained pt model into onnx or IR format, which can be done in a few lines of code. Because the latest version of openvino is applicable to model reading in IR format and onnx format. Next, take onnx format as an example to illustrate the deployment process:

There is no improvement in the corresponding speed of Microsoft's onnx run time. The following is the deployment effect of the same model.

It takes 4 minutes and 09 seconds

Now it only takes 3 minutes and 21 seconds. It has been greatly improved. You can still see the power of OpenVINO.

BERT is like Imagenet in the image field. It learns domain related knowledge in advance through difficult pre training tasks and strong network model, and then does downstream tasks. In terms of model deployment, as shown in the figure, there are only CPU machines. Through comparison, OpenVINO has superior performance and is a powerful tool for our engineering deployment.