In this introductory tutorial, we will build an application development environment in Taifang and learn to write a voting intelligence contract.

In this tutorial, let's build a simple "Hello World!" application, which is a voting application.

The application is simple, all it does is initialize a set of candidates, get anyone to vote for them, and show the total number of votes each candidate receives.

I intentionally avoided using any DAPP framework to build this application because the framework abstracts a lot of detail and you don't know the inside of the system.In addition, when you use the framework, you will have more experience with the heavy work it does!

We are developing a simulated memory block chain (ganache) instead of a real one.In Chapter 2 of this tutorial, we will interact with real block chains.Here are the steps to install ganache, web3js, and then start a test chain on linux.The same is true for installation on macOS. 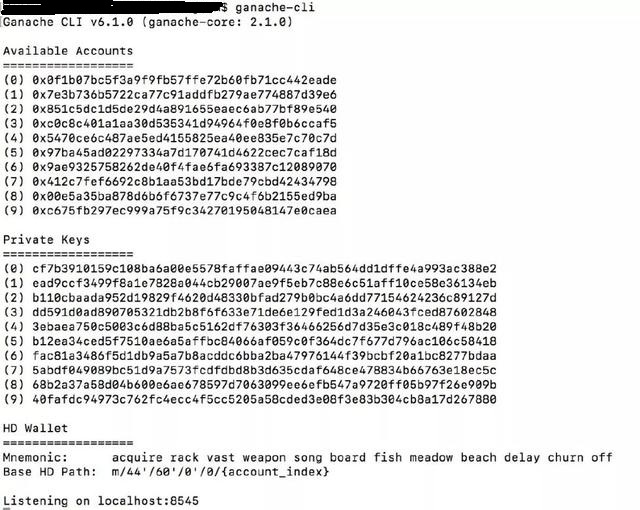 You can see that ganache-cli automatically created 10 test accounts, each with a pre-allocation of 100 (fictional) ethers

If you need a more detailed development environment installation tutorial, you can refer to the following article:

We will use the solidity programming language to write our contract.If you are familiar with object-oriented programming, learning to write solidity contracts should be easy.We will write a contract object with a constructor to initialize an array of candidates.The contract object has two methods:

Note: Constructors are called only once when you deploy contracts to block chains.Unlike every deployment of your code in the network world that overwrites the old code, the deployed code remains the same across the block chain.For example, if you update your contract and deploy it again, the old contract will still be in the block chain, the data it stores will not be affected, and the new deployment will create a contract for a new instance.

Here is the code for the voting contract:

Copy the code above and create a Voting.sol file in the hello_world_voting directory.Now let's compile the code and deploy it to the ganache block chain.

In order to compile solidity code, we need to install an npm module named solc

To ensure that the web3 object is initialized and the block chain is accessible, let's try querying all accounts in the block chain.You should see the following results:

Load the code from voting.sol, save it in a string variable, and start compiling

When your code compiles successfully and prints the contents of the contract object (output in the node console), there are two fields that are important to understand:

If you want to start learning how to develop DApp in Taifang right away, you can visit the excellent online interactive development tutorial provided by Wizard: