Introduction to Netty in Silicon Valley

Analysis of applicable scenarios of BIO, NIO and AIO

Comparison of NIO and BIO

Buffer class and its subclasses

Precautions and details about Buffer and Channel 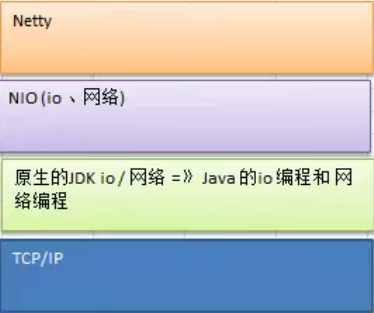 What kind of channel is used to send and receive data, which largely determines the performance of program communication

Synchronous blocking (traditional blocking type). Blocking here means that if no data is read, it will block the function or method. The server implementation mode is one connection and one thread, that is, when the client has a connection request, the server needs to start a thread for processing. If the connection does not do anything, it will cause unnecessary thread overhead, Java BIO is the traditional java io programming, and its related classes and interfaces are in java io 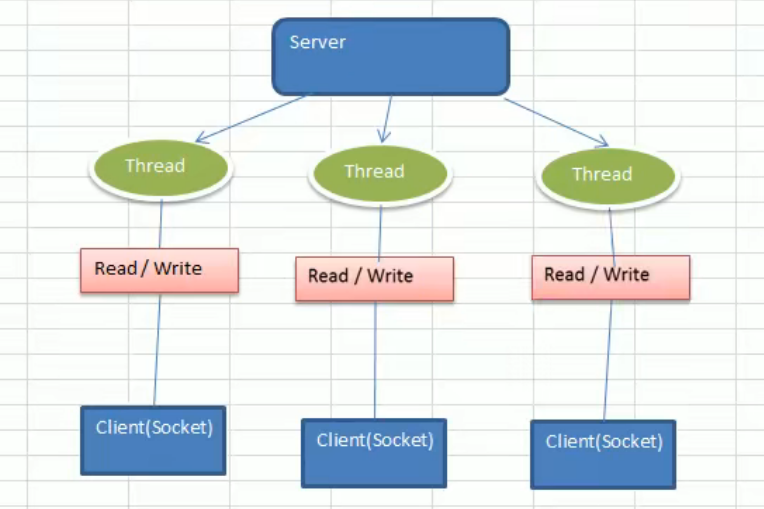 Disadvantages: if there are multiple clients, it means that there are many threads on the server. Threads have overhead and switching between threads. After the link is established, if there is no communication, the server should also maintain this thread. 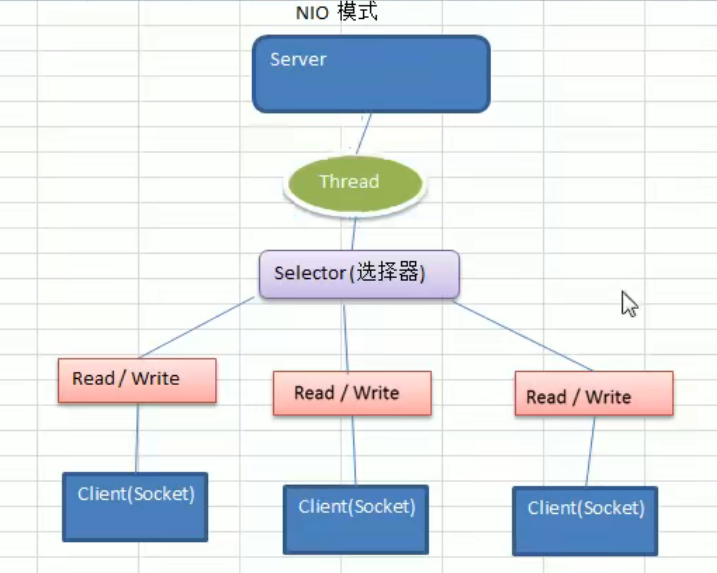 Where there is an I/O request, the client will be connected, which reflects the event driven;

There must be an upper limit on how many connections a thread can maintain. Generally, multiple threads maintain multiple connections. The specific implementation is as follows:

Asynchronous and non blocking. AIO introduces the concept of asynchronous channel and adopts the Proactor mode, which simplifies the programming and starts the thread only after an effective request. Its feature is that the operating system notifies the server program to start the thread for processing after it is completed. It is generally used in applications with a large number of connections and a long time. (a brief introduction is not the key point. Remember that netty5. X is based on its implementation, but the effect is not very good, so netty5. X is invalidated. Because of the Linux system itself)

Analysis of applicable scenarios of BIO, NIO and AIO

BIO mode is applicable to the architecture with small and fixed number of connections. This mode has high requirements for server resources, and concurrency is limited to applications. Jdk1 4 the only choice before, but the program is simple and easy to understand.

AIO mode is applicable to the architecture with a large number of connections and long connections (re operation), such as album server. It fully calls the OS to participate in concurrent operation. The programming is complex, and JDK7 starts to support it.

Example description (mainly verifying that a thread is started when there is a connection): 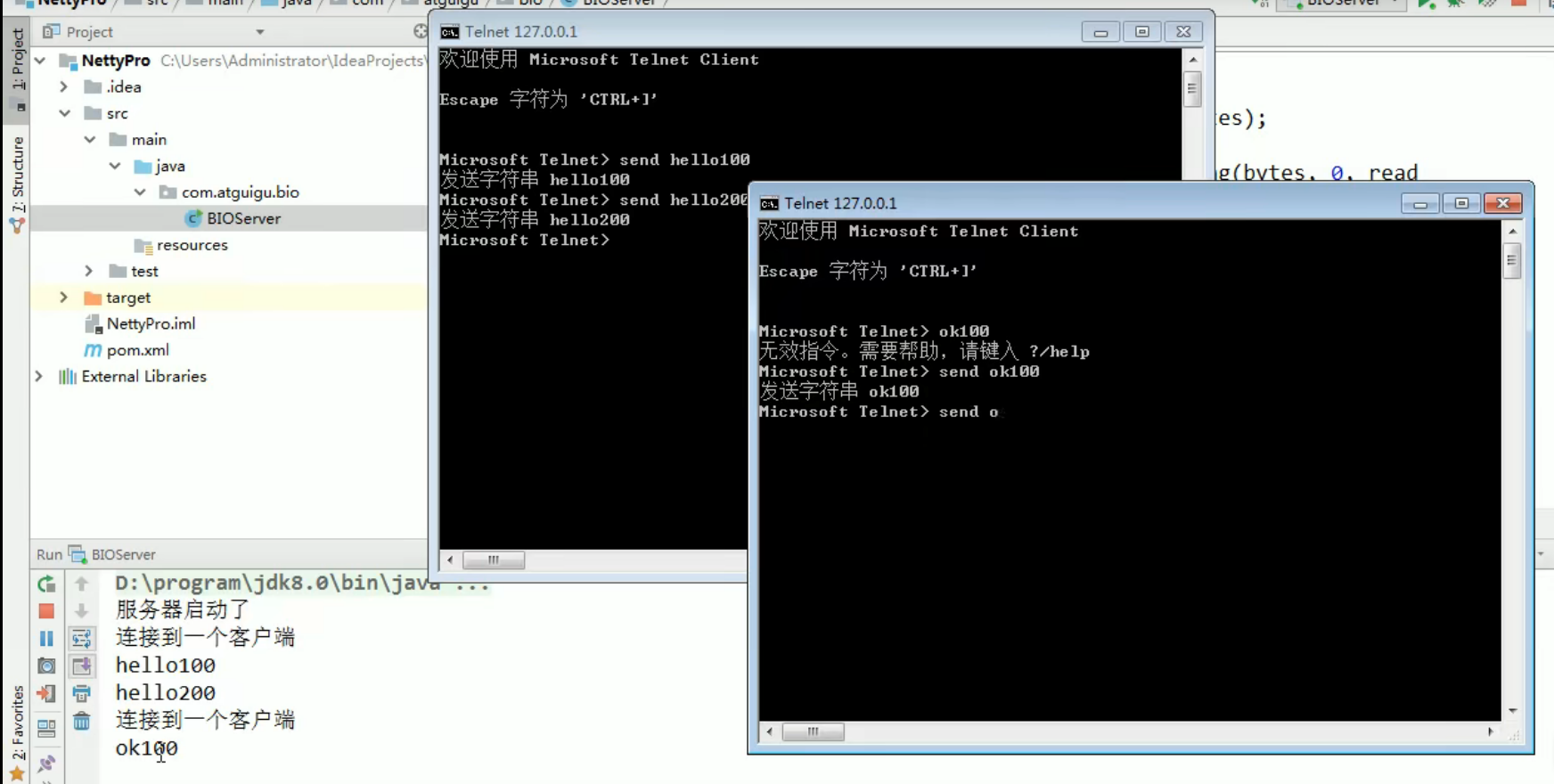 A thread corresponds to a client 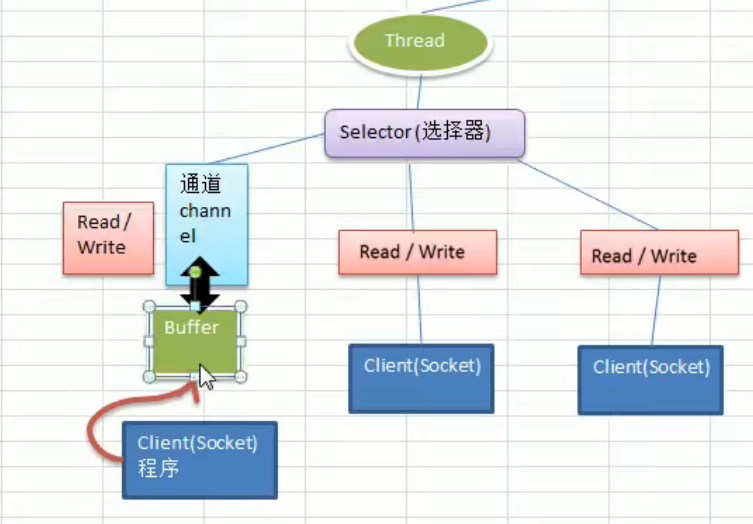 Comparison of NIO and BIO 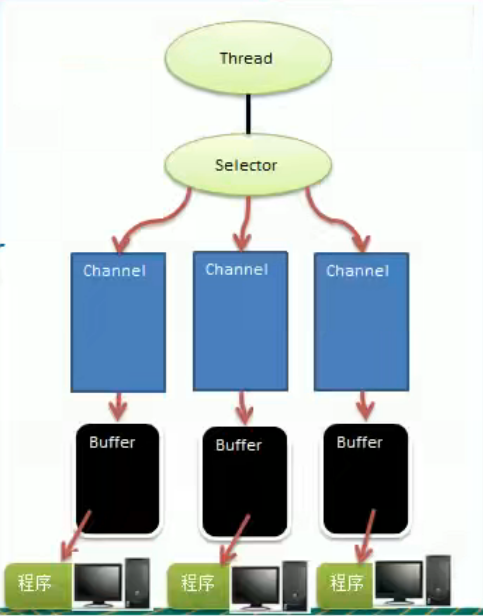 Description of the relationship among Selector, Channel and Buffer:

Buffer: a buffer is essentially a memory block that can read and write data. It can be understood as a container object (including an array). This object provides a set of methods to use the memory block more easily. The buffer object has built-in mechanisms to track and record the state changes of the buffer. Channel provides a channel for reading data from files and networks, but the data read or written must pass through the buffer, as shown in the figure

Friendly note: there are some internal mechanisms in buffer, which can track and record the state changes of buffer. Channel is the channel. It can be imagined that the binary stream transmitted by the network is people. Channel is a way to reach the destination, such as waterway, air flight and road (in the network, it is equivalent to protocols such as WS protocol and http protocol). This buffer is vehicles, ships, aircraft and cars.

Buffer part of the source code, you can see that the bottom layer of IntBuffer contains an array, which also accesses data through the int array

Buffer class and its subclasses

1) Buffer is used to buffer read-write data. Common buffers include, except for Boolean type, other types:

Store various types of data in the buffer

2) The Buffer class defines four attributes that all buffers have to provide information about the data elements they contain: 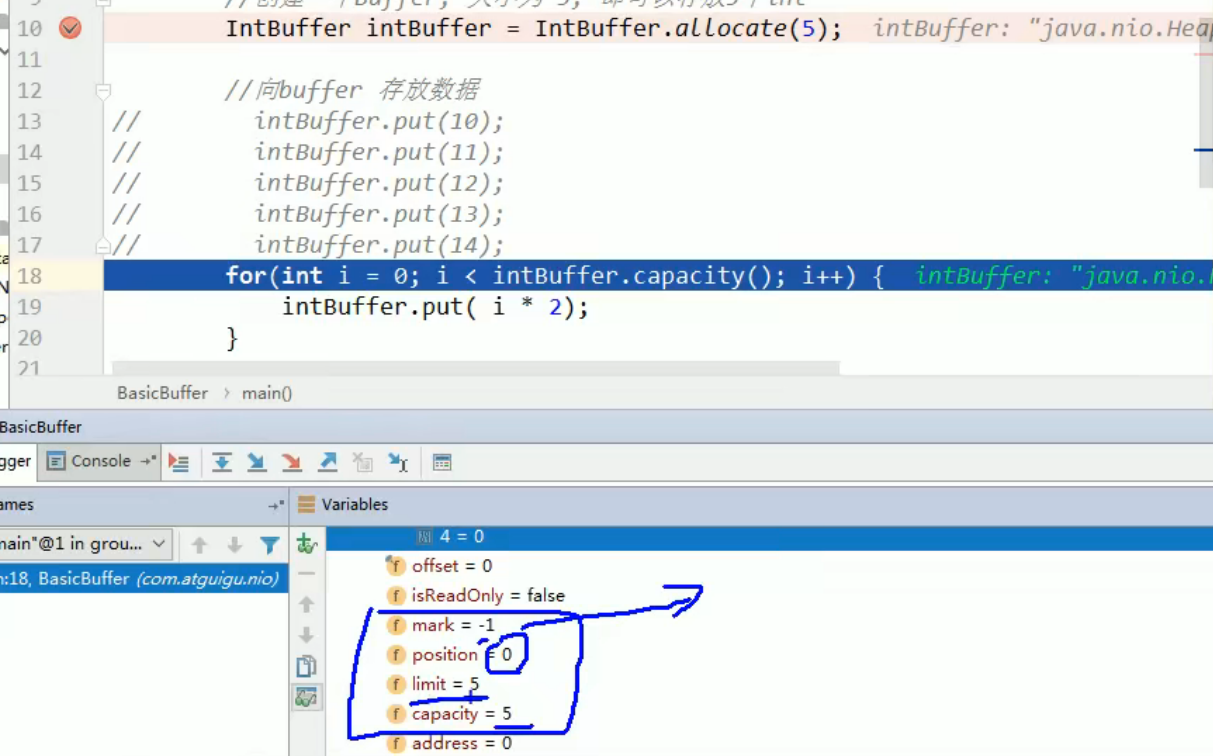 When you enter it to the end, you will find that the position and limit values are the same and cannot exceed the limit value

When reading data, position also continues to move one by one 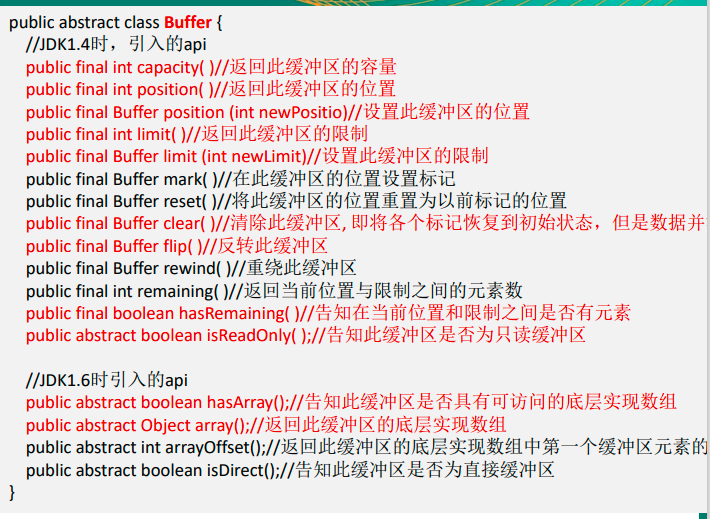 It can be seen from the above that for the basic data types in Java (except boolean), there is a Buffer type corresponding to it. The most commonly used is naturally the ByteBuffer class (binary data). The main methods of this class are as follows:

1) NIO channels are similar to streams, but some differences are as follows:

2) The stream in BIO is unidirectional. For example, the FileInputStream object can only read data, while the channel in NIO is bidirectional and can be read or written

3) Channel is a public interface in NIO China. Channel extensions are closed {}

1) Use the ByteBuffer and filechannel learned above to write "hello, Silicon Valley" to file01 Txt

2) Create if file does not exist

When the put method is run, there are 6 letters + 3 Chinese characters and 9 bytes, a total of 15 bytes

2) Assume that the file already exists

Example 3 - use a buffer to read and write files

This does not take into account that if the data exceeds 1024, the excess part cannot be copied

Friendly tip: transferTo is highly efficient. The bottom layer will be optimized by using the zero copy of the operating system. This method can only transfer 2g memory data at a time

Precautions and details about Buffer and Channel

The results show that 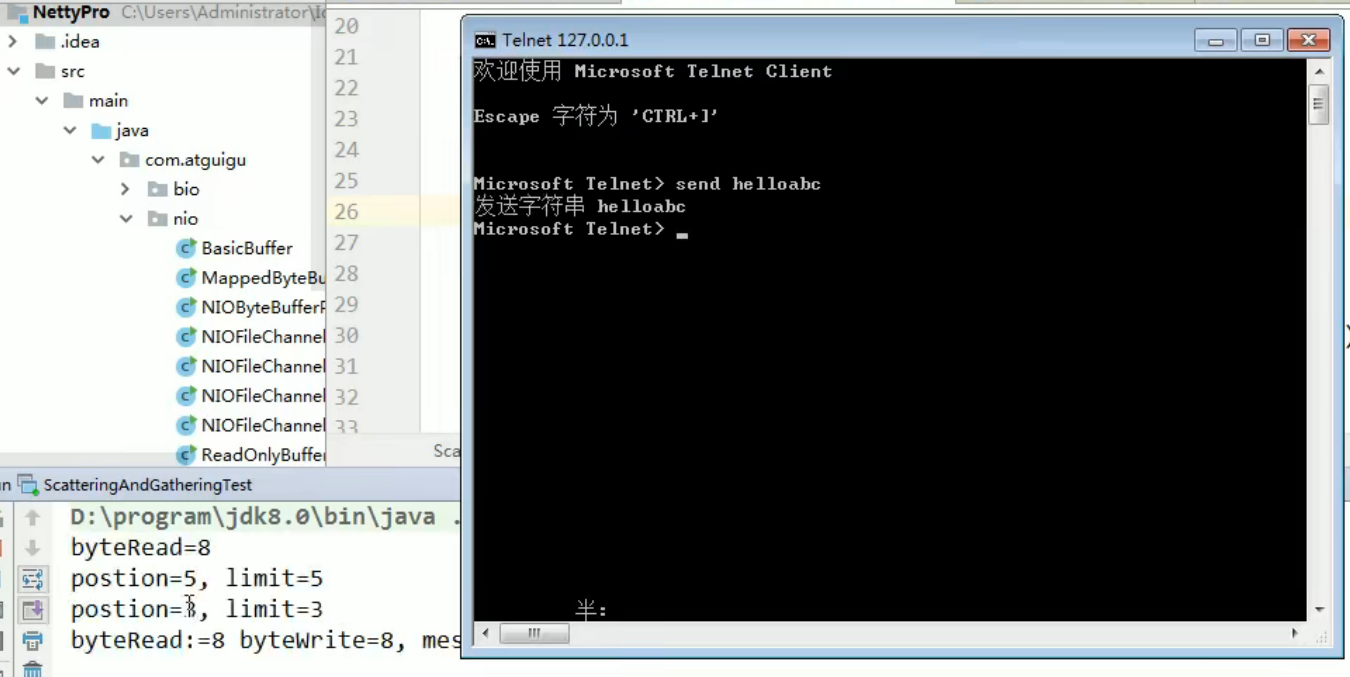