Before 2019, Envoy runs in the form of statically compiled binary files, which means that all its extensions need to be compiled in the construction phase. Therefore, other projects (such as Istio) can only publish the custom Envoy version maintained by themselves. Once there is an update or Bug repair, they have to build a new binary version, publish and redeploy to the production environment.

Although there is no perfect solution to the above problems, some scenarios can be realized through the dynamic loadability of C + +, that is, the web assembly (wasm) module is written and delivered under a standard binary application interface (ABI),

WASM itself is a front-end technology. It is a technology born to solve the increasingly complex front-end Web applications and limited JS script interpretation performance. Through this technology, you can write code in non JavaScript programming language and run on the browser.

With the development of WASM, now WASM can not only be used in browsers, but also has been defined as a new format that is portable, small, fast loading and compatible with the Web as a portable binary format.

The WASM discussed in this paper is used to execute code written in multiple languages in a memory safe sandbox at near native speed. There are clear resource constraints and API s in the sandbox to communicate with the embedded host environment (such as Envoy).

Proxy-Wasm It is the binary application interface (ABI) specification and standard between wasm extension module and L4/L7 agent. It clearly defines the communication interfaces between host environment and wasm virtual machine, function call, memory management and so on.

When the wasm module is called through the extension interface, proxy wasm transcodes and translates through a gasket and runs on the wasm virtual machine. 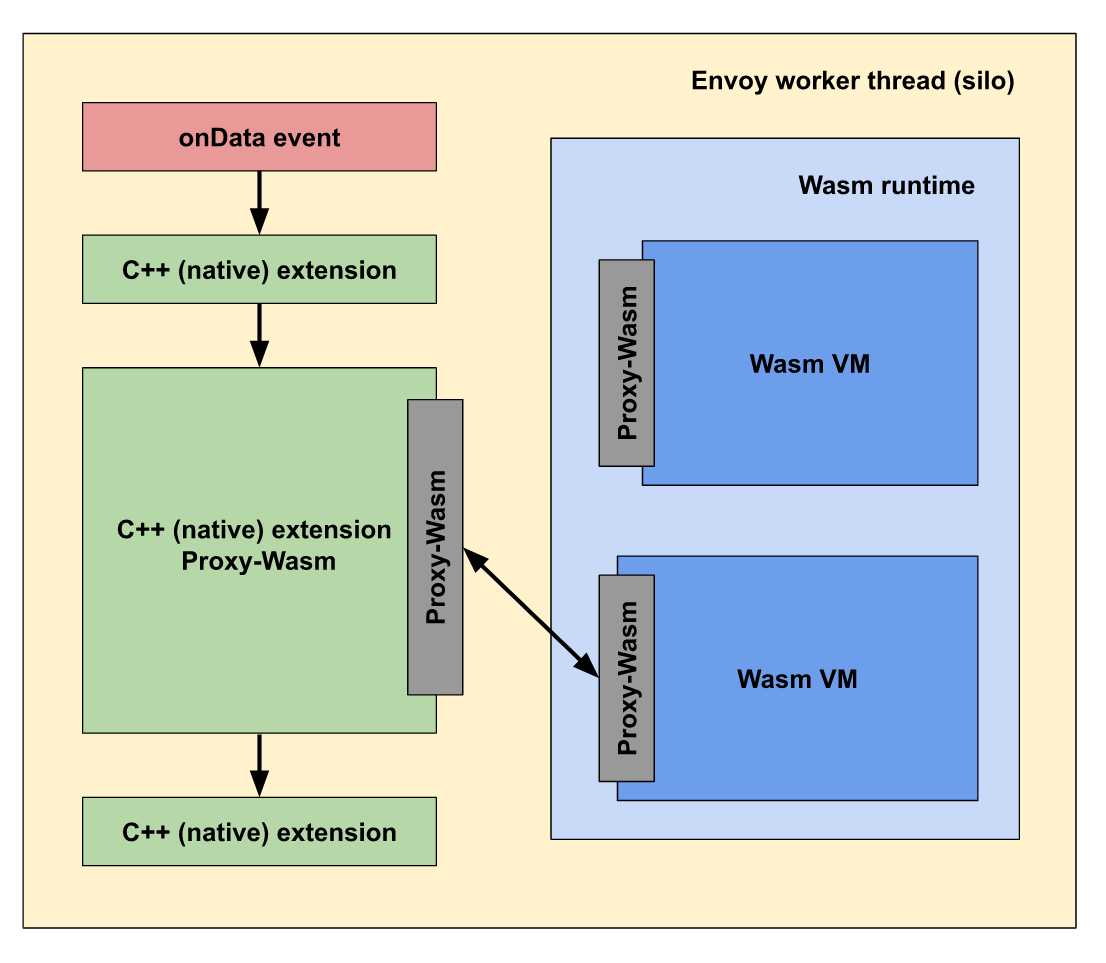 Note: Envoy uses a single process multithreading architecture model. A master thread manages various trivial tasks, while some worker threads are responsible for listening, filtering and forwarding. When a listener receives a connection request, the connection binds its life cycle to a separate worker thread.

Envoy is embedded with LLVM based WAVM and V8 C/C++ Wasm runtime, which can be selected during WASM module configuration.

Go (TinyGo) SDK Is a proxy wasm implementation based on Tinygo language.

TinyGo is a Go compiler designed for small scenarios such as microcontrollers, web assemblies (WASM) and command line tools. It reuses the library used by Go language tools and LLVM to provide another way to compile programs written in Go programming language.

The official Go compiler cannot generate binary files compatible with proxy wasm, and another major difference between TinyGo and Go is the binary size.

According to TinyGo official Description: for the simplest "Hello world" program, under the blessing of the strip command (removing all symbol flags and debugging information), the Go compiler generates 837kb binary, while TinyGo is 10kb, which is close to 1% size reduction efficiency.

Using TinyGo also has some limitations and constraints:

Although it does not support the creation of coroutines, proxy wasm defines the OnTick function, which is similar to the timer trigger function, and can be used to handle some asynchronous call tasks. 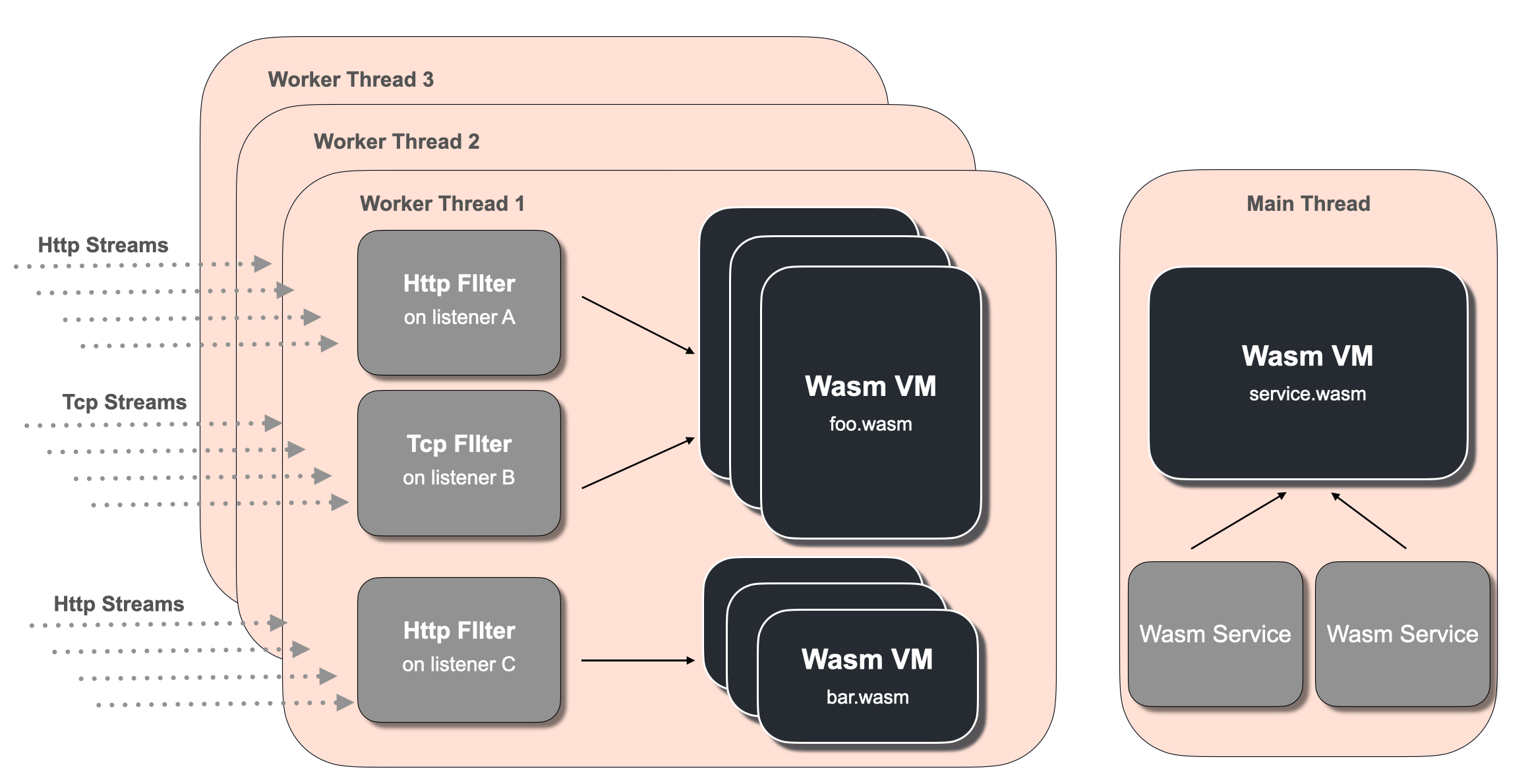 Wasm filter in Envoy is configured as follows:

Field VM_ When all attributes in config are the same value, multiple plug-ins share a Wasm virtual machine, which will have a certain impact on resource usage and startup delay.

Handle TCP events, that is, all TCP traffic (including http traffic), and the plug-in reference is envoy filter. network. Wasm, for example:

Note: the difference between Http Filter and Network Filter is only through different configurations, which act on TCP stream or HTTP stream respectively.

It works on the main thread and is configured in bootstrap_ In extensions, the plug-in reference is envoy bootstrap. Wasm, for example:

The singleton attribute is usually configured as true to represent the virtual machine that reuses the main thread. At this time, the main thread will not block the operation of the plug-in in the working thread.

The set of interfaces in the Go SDK has four types of contexts: VMContext, PluginContext, TcpContext and HttpContext. The relationship table is as follows:

The source code of VMContext is defined as follows:

The plug-in context PluginContext source code is defined as follows:

HttpContext and TcpContext will not be expanded specifically, but can be expanded through context.go View details.

The host call API is a series of methods provided by proxy wasm to interact with network plug-ins. For example, GetHttpRequestHeaders API can be called in HttpContext to obtain Http request header data, and the LogInfo API can be used to add print information to the log.

All available API s are available through hostcall.go View details.

As mentioned above, the built-in wasm runtime on each Envoy worker thread will create a wasm virtual machine. In some specific scenarios, we may need to communicate with other virtual machines in the current virtual machine, such as integration status information, cache data, etc.

Shared data is a scheme based on key value pair storage to share data across virtual machines or threads.

Shared data is applicable to scenarios such as:

A shared storage area is created through vm_config.vm_id configuration, which means that the same wasm binary (specified by vm_config.code) is not a necessary condition. 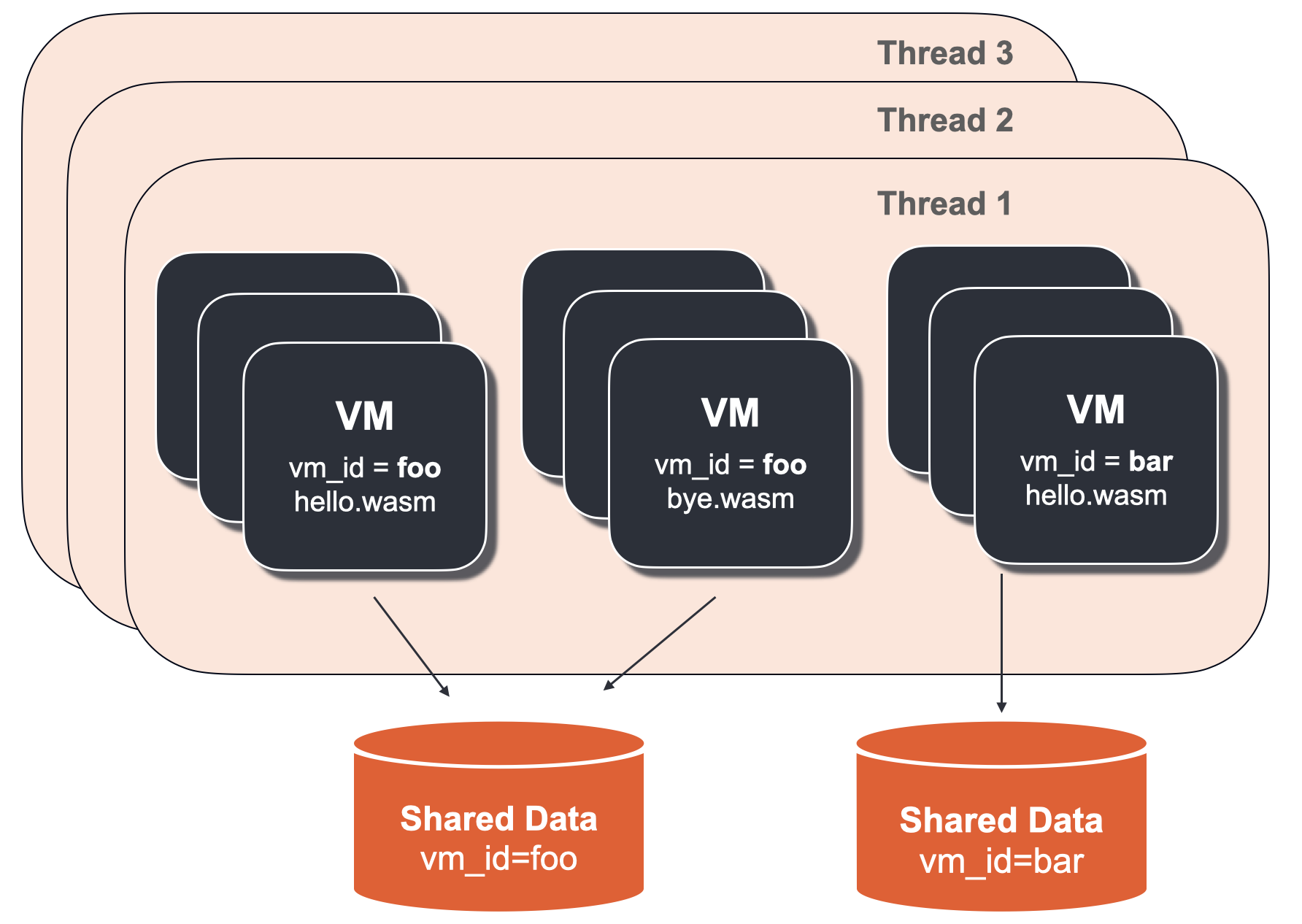 As shown in the figure above, although the two virtual machines use hello Wasm and bye Wasm two binaries, because they use the same vm_id (foo), but they share the same data store.

The API s available for sharing data are as follows:

The API is relatively simple and uses Compare-And-Swap Scheme to ensure thread safety.

A shared queue is a first in first out (FIFO) queue.

Shared queues are applicable to scenarios such as:

A shared queue passes through the VM in the configuration_ config. vm_ ID and a queue name (vm_id, name). Through these two generation, a queue ID(queue_id) can be generated for the out / in queue.

The API s available for shared queues are as follows:

stay Environment context As mentioned in the section, the PluginContext contains an API OnQueueReady, which is the mechanism used to notify the "consumer" when data is queued. When other plug-ins queue data, OnQueueReady of this plug-in is called.

It is recommended to create a shared queue in the Wasm Service of the singleton (such as the main thread of Envoy). Otherwise, when OnQueueReady is called, the Tcp/Http stream processing of the current worker thread will be blocked. 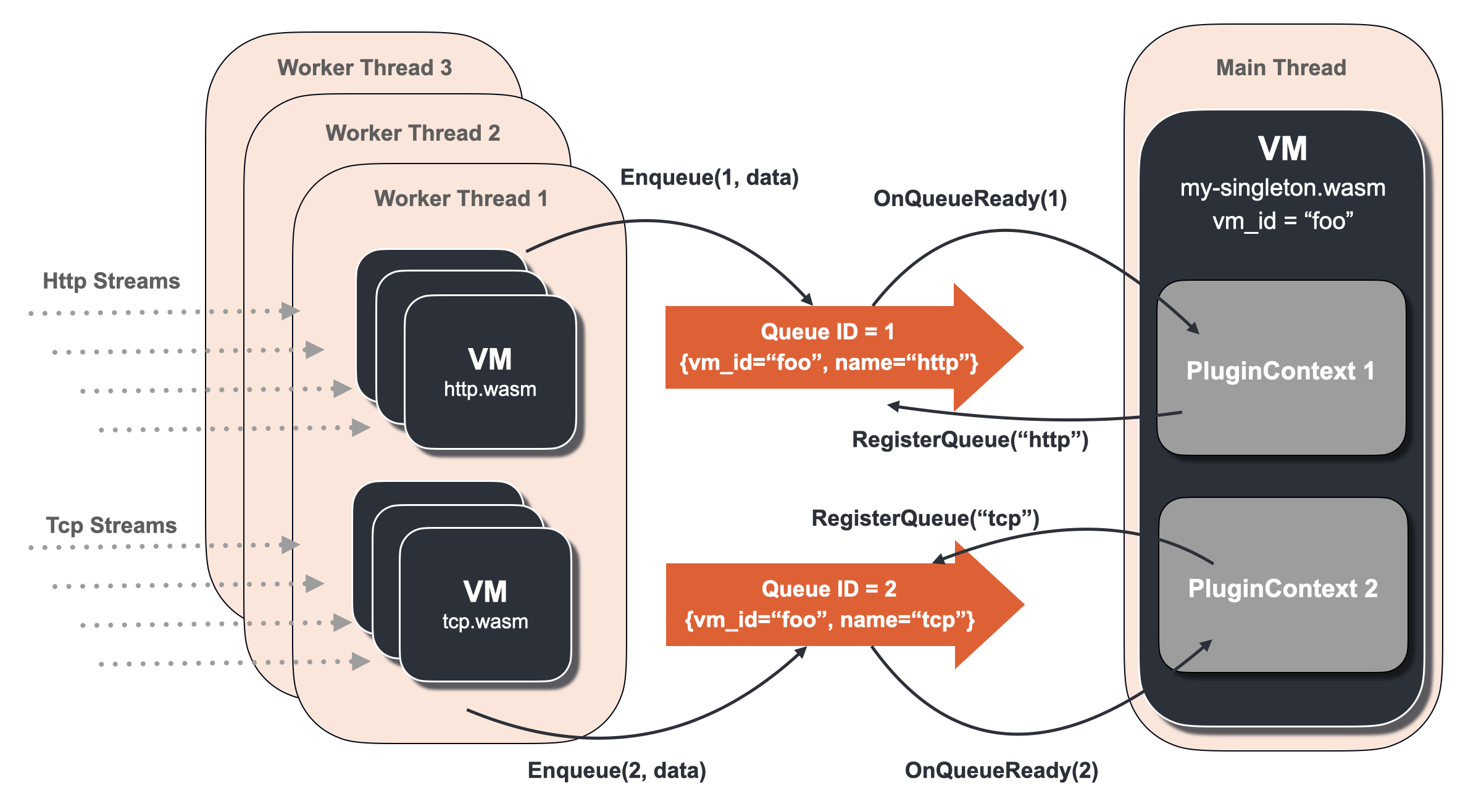 As shown in the above figure, the main thread wasm virtual machine (vm_id="foo", my-singleton.wasm) creates and registers two shared queues (named "Http" and "Tcp" respectively) through RegisterQueue. The "producers" of the two shared queues instantiate HttpContext and TcpContext in the wasm virtual machine of their respective worker threads to process Http and Tcp data streams. When they queue data to their respective queues, the PluginContext in the main thread automatically calls the OnQueueReady method to obtain queue data.

Due to the rich functions supported by Wasm filter, this section only carries out a simple data stream printing test to verify its role in Tcp data stream.

Deploy the following services and inject them into the side car to verify the normal operation of the service:

Modify its default generated main Go to make it conform to the usage of the new SDK (the default application is version v0.1.0). Add a custom print function:

Among them, Envoy supports the referenced environment context attribute. See its Official website.

Compile the code in linux environment to generate binary files:

For simplicity, the storage is mounted in the hostPath mode so that the sleep service sidecar container can access the locally generated Wasm binary file:

Modify the log level of the client side car container to Info, and the default is Warn, while proxywasm is used in the above code Loginfof enter Info log:

Because this paper applies Wasm module to SIDECAR_OUTBOUND environment, so it is necessary to adjust the client side vehicle log level.

Write the EnvoyFilter resource so that the Wasm filter is inserted into the last filter envoy filters. network. tcp_ Before proxy:

EnvoyFilter configuration of Dubbo protocol except listener Name needs to be replaced with serviceentry Spec.addresses is almost the same as others. It is not expanded here.

Enter the sleep service and send an http request:

At this time, observe the sidecar container log of sleep service: 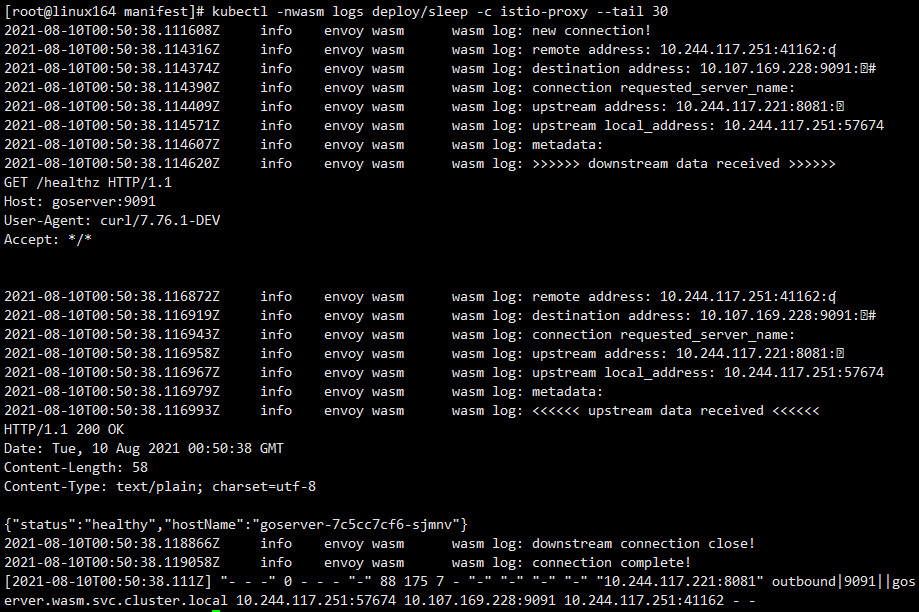 According to the above results, the addresses and port data printed in ondownstreamdata (client request data) and onupstreamdata (server response data) are consistent. Since Http traffic also belongs to Tcp traffic, the message header and body in Http request are completely printed.

Since the deployed client requests the server data regularly, it is not necessary to trigger the request sending manually.

In the dubbo protocol traffic, the request and response data are also printed normally. Because the protocol header customized by dubbo is in non plain text character format, some garbled codes appear in the data.

However, the interface, method, message type and other data in the request can still be seen in the body.

The above application of Wasm filter in Istio service grid, from its architecture principle, standard use specification to sample test, completely shows its pluggable and scalable characteristics in Envoy agent.

However, problems in its application in Istio will still be found in practice:

It is believed that the official will support the Wasm extension of Envoy written in more and more languages. We can easily choose our own familiar language to implement such functions as measurement, observability, transformation, data loss prevention, compliance verification or other functions.