java and contract( java.util.concurrent) is a powerful and extensible tool class for concurrency management provided by jdk. The main source code author is Doug lea (Doug Lee), a well-known concurrency programming master. The strong expansibility of the whole juc and the essence of concurrent programming thought are In the basic class AbstractQueuedSynchronizer, we can know from the name of this class that it is a queue synchronizer. Yes, the synchronization management of threads in juc is through a queue. 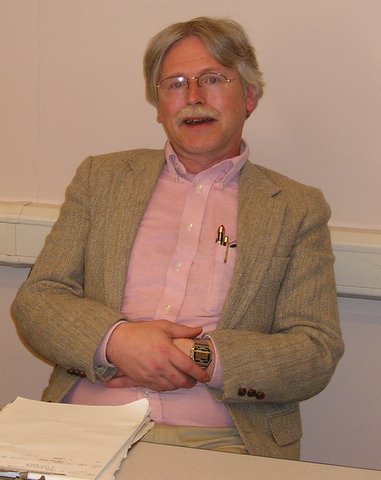 A key attribute in AQS is the following state, which marks the synchronization status. Why is it the embodiment of AQS's strong expansibility? Because in different concurrent tools implemented based on AQS, state means different meanings, and the functions of these concurrent tools are carried out around state, such as:

Therefore, because juc uses state flexibly and based on the basic thread queue management function provided by AQS, it makes juc powerful. At the same time, note that this state is modified by volatile to ensure the visibility between threads.

1.3 support of native method for AQS

The threads running in the program we write are all user state threads. To make the user state thread enter the waiting state, you need to make the user state thread enter the kernel state. At the same time, the wake-up operation needs to switch the threads up and down. These operations are supported by the operating system. java code runs on the virtual machine and cannot directly call the operating system, This part is implemented through the native method provided by jdk, that is, Unsafe class.

Unsafe provides many native methods. For understanding AQS, we only need to know some of them.

The first is the park method, which literally means parking. This is the native method that allows the thread to enter the waiting state. AQS calls this method to operate the thread in a practical sense. Of course, it calls the encapsulation method of park by LockSupport class.

With park, of course, unpark is indispensable. This is the method to wake up the thread.

There is also the compareAndSwapInt method, which provides atomic cas at the operating system instruction level. Note that this method is atomic. This is also a native method. What is passed in is the address of the object, the variable to be changed, the memory offset, expected value and target value of the initial address of the object. cas doesn't explain much here. It mainly remembers an ABA problem and the version number mechanism.

The whole Unsafe class provides native methods for atomic operations on objects. Basically, the operation methods are to locate attributes according to the offset of attributes in object memory, and then operate on some columns. This style is very similar to C language.

ReentrantLock is implemented based on AQS. Some extensions are made through the general thread management framework provided by AQS. The specific extensions are reflected in the fact that ReentrantLock class inherits AQS and implements a synchronizer Sync, but the Sync itself is abstract, Another two classes inherit this synchronizer and implement two synchronizers that obtain locks fairly and unfairly, namely FairSync and NonFairSync. ReentrantLock uses the unfair lock acquisition method by default. I will explain the lock acquisition of these two methods here.

As mentioned above, the queue synchronizer that can be used by ReentrantLock and AQS actually have a two-tier inheritance relationship. The code calling process in this part is very winding. It will be very confused when you look at it for the first time. One is the internal subclass calling the parent class, and the other is the parent class calling the internal subclass. I think this style will only appear in this source code, Usually the code we write is concise and clear.

It can be understood that AQS is a synchronizer, which maintains a FIFO queue. The synchronization of threads is actually completed through the thread node in the synchronizer operation queue. 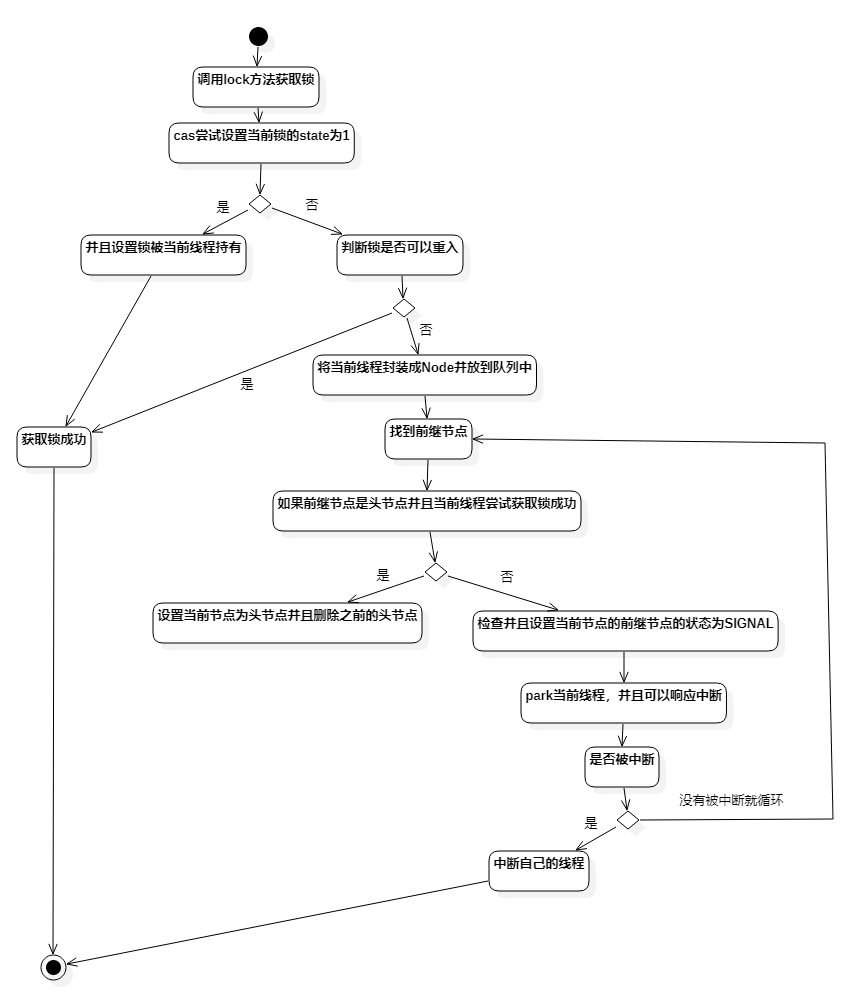 Here, I will introduce the main method logic following the steps of the above flowchart.

The acquire method is the method to acquire the lock after the current lock has been acquired by other threads.

The logic here is also a concrete embodiment of reentrant lock. When the thread currently holding the lock is the thread currently trying to obtain the lock, it directly sets state plus one. In ReentrantLock, the value of state indicates the number of times the current lock has been re entered. If it is 0, it means that the current lock is not held by any thread. Each time the thread re enters the lock, the state will increase by one. Similarly, each time the lock is released, the state will decrease by one. That is to say, each time the lock method is called, a corresponding unLock method is required, otherwise the lock cannot be released.

When the lock is not obtained in the above steps, the thread needs to be encapsulated as a Node and placed in the AQS queue for waiting. The nodes put into the queue are placed at the end of the queue, which is also in line with our common sense of queuing.

The queue initialization method calls the enq method, which will not be expanded here. The logic is very simple, that is, first create an empty node as the head node, and then put the node of the current thread after the empty node as the tail node.

After completing the above steps, the node of the current thread has been placed in the queue, and then the acquirequeueueueued method will be executed to let the thread try to obtain the lock in the queue. This step is more abstract. I'll borrow the illustration of this step in the art of concurrent programming:

The above figure can be described vividly. All threads encapsulated as nodes spin in the queue. The purpose of spin is to try to obtain locks. In fact, this figure may have other states. Maybe all node spin states after the head node stop, Because after the attempt to acquire the lock fails, the thread will block itself and wait for the wake-up after the previous node releases the lock.

Let's take a detailed look at the code implementation of the above steps. What is called here is the acquirequeueueueued method, which literally means to obtain the lock in the queue. Yes, the threads that obtain the lock in this step are in the queue. The general state of the whole AQS queue is shown in the figure above. You can see that there is an dead loop in the method, which is the spin operation. So what is the logic of spin lock acquisition or self blocking?

The way to get the thread into the blocking state is parkAndCheckInterrupt, which can be used to determine whether the thread can be safely waiting. After calling locksupport park(this); After this code, the process executed by the current thread stops directly on this line of code. After being awakened, the program will start to execute on the lower line of this line of code through thread interrupted(); To check whether the thread is set to interrupt while waiting.

Then, after throwing an exception, the program will not return immediately, but needs to clean up the queue after giving up obtaining the lock. One of the tasks of cleaning up is to remove its own node from the queue, and the other is to ensure that the successor nodes of the current node can be safely awakened.

The release of locks is neither fair nor unfair, and the logic of releasing locks is also very simple.

2.4 difference between fair and unfair

Instead of obtaining locks fairly, as we said above, in tryAcquire, no matter whether there are threads in the queue or not, it directly modifies the state value through cas. If the modification is successful, it will obtain the lock.

ReentrantLock is a non fair lock by default.

Through the above learning, we can implement a thread synchronization tool through AQS. In some business scenarios, we may need to have only one thread executing a process, so we can simply implement a non reentrant lock function according to this.

Let's talk about the overall class structure first. Because the thread synchronization tool through AQS is relatively flexible, this uses the class diagram to describe the relationship between classes.

The first is our NonReentrantLock class, which is the actual tool class. As a Lock, it needs to implement the Lock interface, including lock(), unlock(), lockinterruptible(), tryLock(), tryLock(long time, TimeUnit unit), and newCondition(). But we only implement the Lock () and unlock () methods. 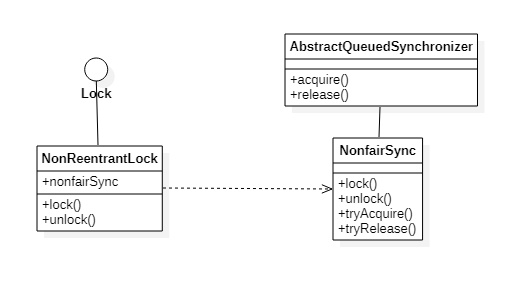 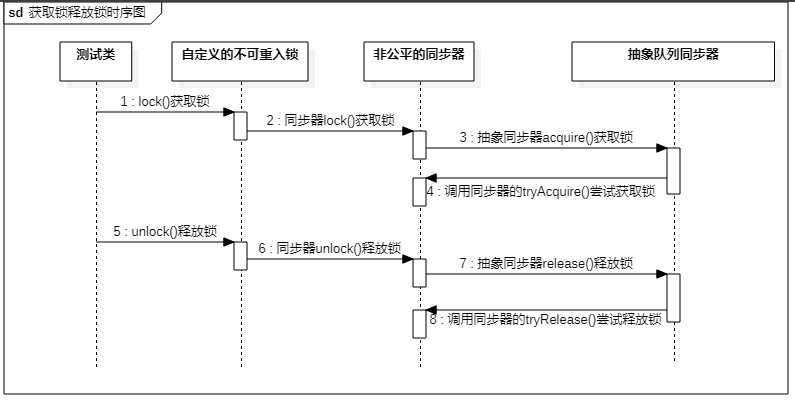 Test results: we can see that we tried to use this non reentrant lock as a reentrant lock. The first time we successfully obtained the lock, and an exception will be thrown if the current thread is not the thread holding the current lock.