1. What is a blocking queue?

A blocking queue is a queue that supports two additional operations. These two additional operations are: when the queue is empty, the thread that gets the element will wait for the queue to become non empty. When the queue is full, the thread that stores the element waits for the queue to become available. Blocking queues are often used in the scenario of producers and consumers. Producers are threads that add elements to the queue, and consumers are threads that take elements from the queue. A blocking queue is a container where producers store elements, while consumers only get elements from the container.

Exception: when the blocking queue is full, inserting elements into the queue will throw an IllegalStateException("Queue full") exception. When the queue is empty, NoSuchElementException will be thrown when getting elements from the queue.

BlockingQueue is introduced in detail. The following are the main contents involved:

In the new Concurrent package, BlockingQueue solves the problem of how to "transmit" data efficiently and safely in multithreading. These efficient and thread safe queue classes bring great convenience for us to quickly build high-quality multithreaded programs. This article introduces all members of the BlockingQueue family in detail, including their respective functions and common usage scenarios.

The core method of BlockingQueue:

Learn about ReentrantLock and Condition before going deeper:
ReentrantLock:
ReentrantLock lock can only be held by one thread lock at the same time point; Reentrant means that the ReentrantLock lock can be acquired by a single thread multiple times.
ReentrantLock is divided into "fair lock" and "unfair lock". The difference between them is whether the mechanism of obtaining locks is fair. "Lock" is to protect competing resources and prevent multiple threads from operating threads at the same time. ReentrantLock can only be obtained by one thread at the same time point (when a thread obtains the "lock", other threads must wait); Reentrant lock manages all threads that obtain the lock through a FIFO wait queue. Under the "fair lock" mechanism, threads queue up to obtain locks in turn; The "unfair lock" will acquire the lock when the lock is available, whether it is at the beginning of the queue or not.
Main methods:

Condition: await() and signal() methods correspond to wait() and notify() of the previous Object respectively

The following is a brief introduction:

The generic parameter of DelayQueue needs to implement the Delayed interface, which inherits the Comparable interface. The DelayQueue uses a non thread safe priority queue and uses the Leader/Followers mode to minimize unnecessary waiting time. DelayQueue does not allow null elements.

All threads have one of three identities: leader and follower, and a working state: proccesser. Its basic principle is that there is always at most one leader. And all followers are waiting to become leaders. When the thread pool starts, a leader will be automatically generated to wait for the network IO event. When an event occurs, the leader thread will first notify a follower thread to promote it to a new leader, and then go to work to deal with the network event. After processing, join the follower thread waiting queue and wait to become a leader next time. This method can enhance the similarity of CPU cache and eliminate dynamic memory allocation and data exchange between threads.
Parameters and constructors:

First look at the offer() method:

Ordinary poll() method: if the delay time is not exhausted, it will directly return null

Take another look at the take() method:

Finally, take a look at the poll method with timeout:

The final call of the add method and offer method here is enqueue(E x) method, which directly adds elements to the array items through the putIndex index. Here, you may wonder that when the putIndex index size is equal to the array length, you need to reset the putIndex to 0, because the current queue always obtains elements from the queue head, The added elements are obtained from the end of the queue, so when the queue index (starting from 0) is equal to the length of the array, we need to add from the head of the array next time, as shown in the following figure 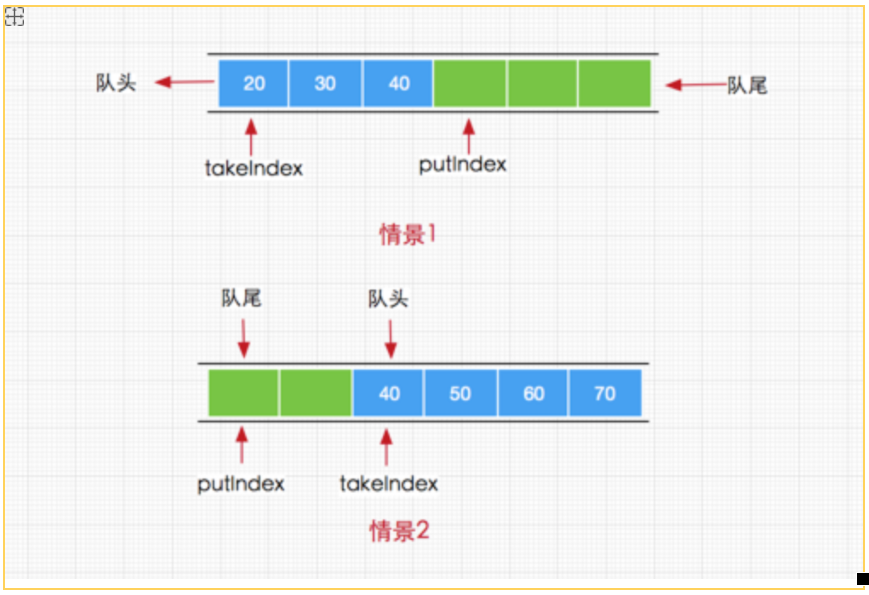 Next, let's look at the method:
The put method is a blocking method. If the queue element is full, the current thread will be suspended by the notFull condition object and added to the waiting queue. It will not wake up to perform the add operation until the queue has a gap. However, if the queue is not full, the enqueue(e) method is called directly to add elements to the array queue. So far, we have analyzed the three addition methods, namely put, offer and add. Under normal circumstances, offer and add are non blocking addition, while put method is blocking addition. This is the process of adding a blocking queue. To put it plainly, when the queue is full, the thread that calls the put method is blocked by conditional object Condtion until the thread is awakened again. Generally speaking, there are two situations in the execution of adding threads. One is that when the queue is full, the new put thread will be added to the notFull condition queue and wait. The other is that there is a removal thread to perform the removal operation. If the removal is successful, the put thread will wake up at the same time, as shown in the figure below 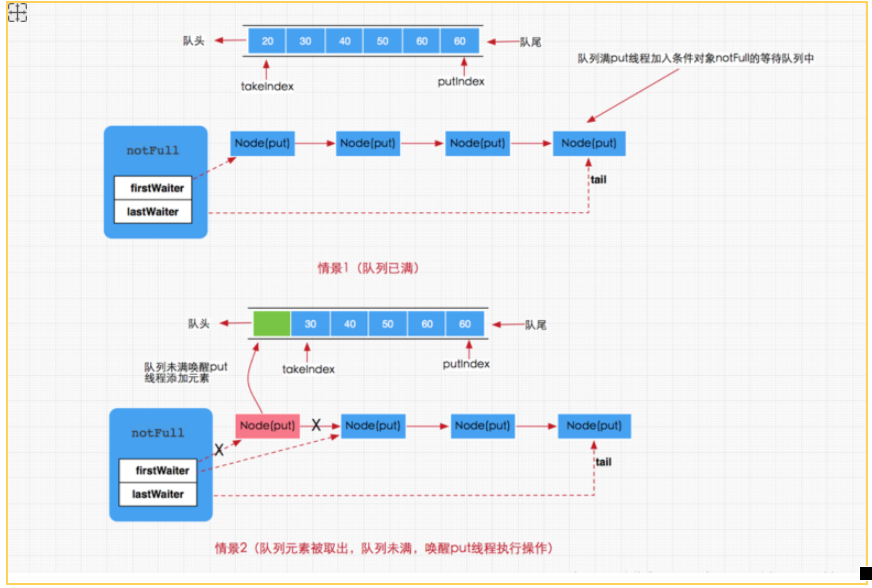 poll method, which gets and removes the header element of the queue. If the queue is empty, it returns null

Next, look at the remove(Object o) method

The delete process of the remove(Object o) method is relatively complex because it does not directly delete elements from the queue head. First, the thread obtains the lock first, and then judges that the queue count > 0. This is to ensure the safe execution of deletion operations in case of concurrency. Then get the index putIndex and takeIndex of the next source to be added as the end judgment of the subsequent cycle, because as long as putIndex and takeIndex are not equal, the queue is not ended. Then find the element index to be deleted through the while loop and execute the removeAt(i) method to delete. In the removeAt(i) method, two things are actually done: first, judge whether the queue header element is a deleted element. If it is deleted directly, wake up the adding thread; second, if the element to be deleted is not a queue header element, execute the loop operation, Move the elements after removeIndex one position forward from the index of the element to be deleted, and the element to be deleted will be replaced by the element after removeIndex, thus completing the deletion operation.

Then look at the take() method
The take method is actually very simple. If there is data in the queue, delete it and block it. Note that this blocking can be interrupted. If there is no data in the queue, join the notEmpty condition queue and wait (if there is data, take it directly and the method ends). If a new put thread adds data, the put operation will wake up the take thread and execute the take operation. The illustration is as follows 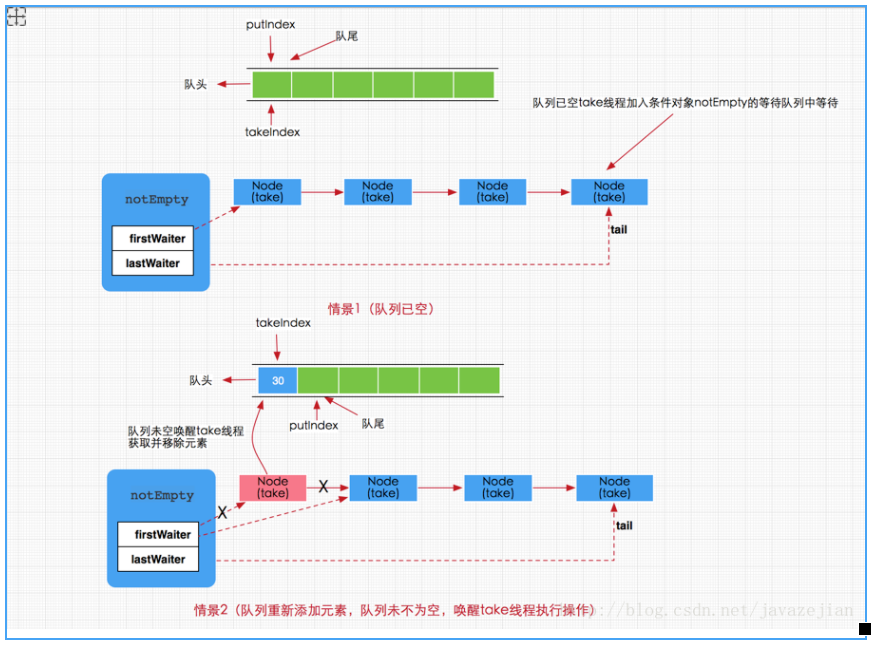 Finally, take a look at the peek() method, which is relatively simple. It directly returns the header element of the current queue without deleting any elements.

First look at the constructor

TimeUnit: time unit; BlockingQueue: the waiting thread stores the queue; keepAliveTime: idle timeout time of non core thread, beyond which it will be recycled; RejectedExecutionHandler: the processing policy of the thread pool for rejecting tasks.
Custom thread pool: this construction method is critical to the type of queue.

Next, let's look at the source code: