It is believed that the little buddies who have programming basics all know the data structure of arrays. It should also be the first data structure that we come into contact with. Those who have learned C or C++ should know that arrays and pointers are closely related. What are the different features of arrays in Java without pointers?Let's talk about arrays in java.

Arrays are also a type

Array elements in arrays are unique, which you should all know, but because java is an object-oriented language and there is an inheritance relationship between classes (which is also in C++), sometimes there is a situation where there are multiple data types in an array. In fact, at the end of the day, the type of array elements is one, which is the parent class.

In java, arrays are also a data type, the parent of the array is Object, and the array itself is a reference type (basic types such as int, char, double, etc.)

For example, in java, one way to define arrays is int[], which defines an array of integers and cannot be separated from each other, so int[] is a reference type because the objects we create with it are arrays.

In the following learning of arrays, it is more helpful to understand arrays as reference types and not think with arrays of C or C++.

Here are a few features of a simple and tidy array:

Declarations and initialization of arrays

For these two methods, we won't cover them much here, just to let you know, but the only way we need to remember and use is the first, which is better than the second, whether it's readability or understanding of arrays. Those who may have just learned C or C++ will see the second more intimate, from now on.Don't think about the second one anymore; (C#no longer supports the second grammar, and more and more languages no longer support it;

Array is a variable of reference type, so when it is known as a variable, it only defines a reference variable (i.e. a pointer). A buddy who has studied C or C++ must know that when a pointer is defined, it does not point to any valid memory space, and so does this reference variable.Therefore, the array cannot be used at this time and needs to be initialized.
ps: If you have learned C or C++, you can think about the relationship between reference variables and pointers, which makes learning easier.

The format is as follows:

Either of these is possible. The second is simpler than the first, but I think the first is better for understanding the memory space of the array.

2, Dynamic Initialization
When initializing, you only need to specify the length of the array, and the system will automatically assign the initial value.

The format is as follows:

Here is the initial value that the system automatically assigns:

Although there is no pointer in java, Java introduces the concept of reference, which is also an operation on memory, so understanding the underlying mechanism is particularly important for code writing and understanding.
The following is a little more difficult, but if you have touched the concept of pointer in advance, you will find many similarities for the following;

Draw a picture to better understand: 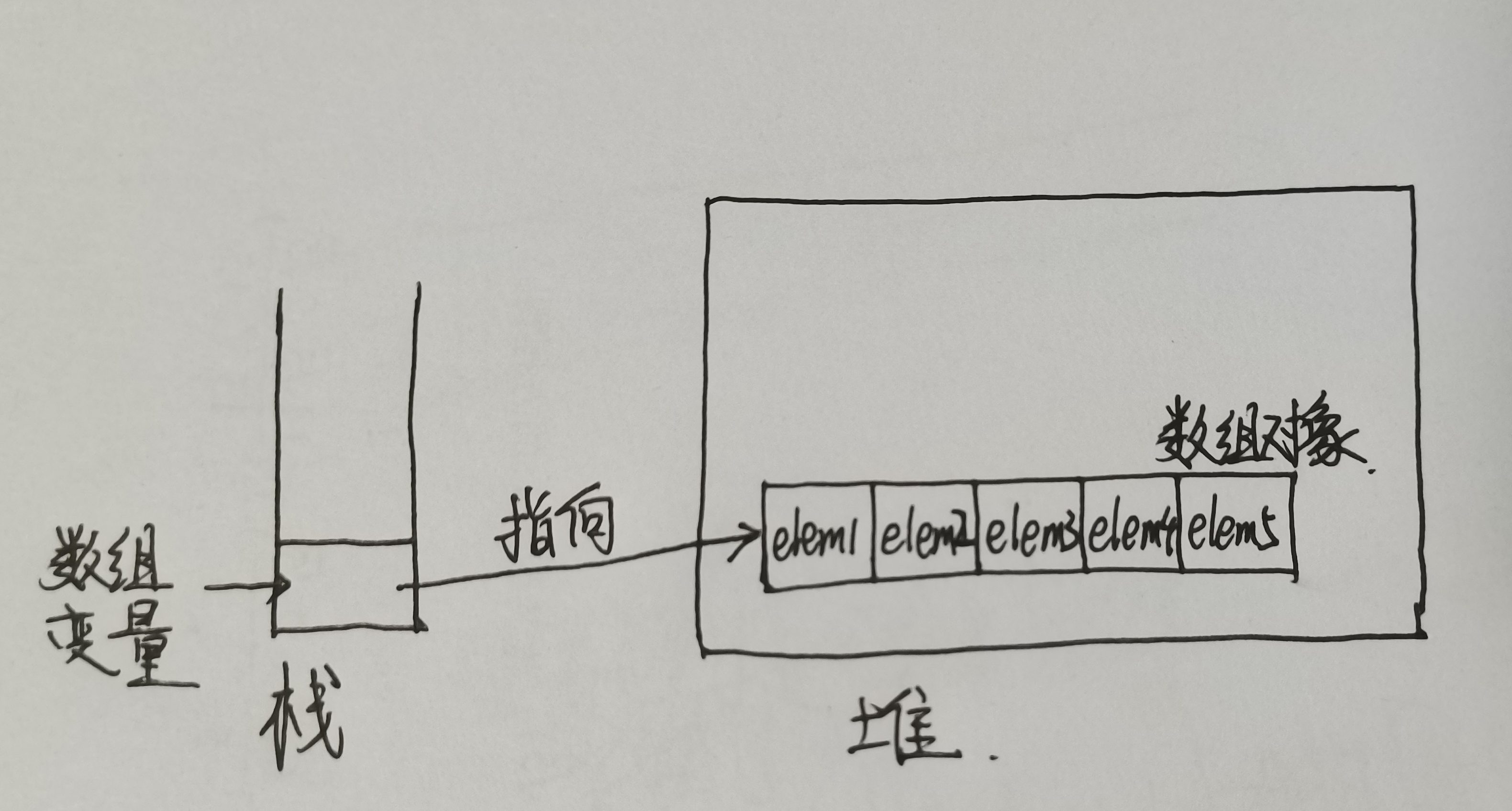 Let's take a look at the case, the code will help you understand better:

Explain here:
Start by defining two reference variables: A and b, then system memory produces four memory areas, A and B are in the stack area, and the arrays a and B point to are themselves in the stack area;
A refers to an array object with five elements {1, 2, 3, 4, 5}, while B refers to a system-initialized data object with six elements {0, 0, 0, 0, 0}. When B points to a, the data object of B is in a situation where no reference variable is referenced, and the data object of a is referenced by two reference variables, A and b, where the length of B is a 5,So when the first data of a changes, it is equivalent to the first data change of B.

Here I'm just going to give you a brief introduction to arrays in java. Don't think that if you really learn arrays, they can only be regarded as a starting point for Java arrays. You may be able to learn how to use arrays, but there are still many things that are hard to understand about how arrays work in memory. It is strongly recommended that you learn C pointers in advance.It is also a good idea to understand pointer arrays, which will help you better understand the storage and initialization of arrays in memory, understand these, and you will have a more accurate understanding of how your program works!

ps: Content welcome to communicate if you have any questions!!