24. Tell me about the implementation principle of HashSet?

25. What is the difference between ArrayList and LinkedList?

The most obvious difference is that the underlying data structure of ArrayList is array, which supports random access, while the underlying data structure of LinkedList is bidirectional circular linked list, which does not support random access. Using subscripts to access an element, the time complexity of ArrayList is O(1) and LinkedList is O(n).

26. How to realize the conversion between array and List?

27. What is the difference between ArrayList and Vector?

28. What is the difference between array and ArrayList?

29. What is the difference between poll() and remove() in the Queue?

Both poll() and remove() take an element from the queue, but poll() will return null when it fails to get the element, but an exception will be thrown when remove() fails.

30. Which collection classes are thread safe?

Iterator is a design pattern. It is an object. It can traverse and select objects in a sequence, and developers do not need to understand the underlying structure of the sequence. Iterators are often referred to as "lightweight" objects because they are inexpensive to create.

32. How to use iterator? What are the characteristics?

The Iterator function in Java is relatively simple and can only move in one direction:

(1) Using the method iterator() requires the container to return an Iterator. The first time the Iterator's next() method is called, it returns the first element of the sequence. Note: the iterator() method is Java Lang. Iterable interface, inherited by Collection.

(2) Use next() to get the next element in the sequence.

(3) Use hasNext() to check whether there are any elements in the sequence.

(4) Use remove() to delete the newly returned element from the iterator.

Iterator is the simplest implementation of Java iterator. The ListIterator designed for List has more functions. It can traverse the List from two directions, or insert and delete elements from the List.

33. What is the difference between iterator and ListIterator?

35. What is the difference between parallelism and concurrency?

Therefore, the goal of concurrent programming is to make full use of each core of the processor to achieve the highest processing performance.

36. What is the difference between threads and processes?

In short, process is the basic unit of program operation and resource allocation. A program has at least one process and a process has at least one thread. The process has independent memory units during execution, and multiple threads share memory resources to reduce the number of switches, so it is more efficient. Thread is an entity of a process. It is the basic unit of cpu scheduling and dispatching. It is a smaller basic unit that can run independently than a program. Multiple threads in the same process can execute concurrently.

A daemon thread is a service thread. To be precise, it is a thread that serves other threads.

38. What are the ways to create threads?

39. What's the difference between runnable and callable?

It's a little deep. It also shows the breadth of knowledge a Java programmer can learn.

40. What are the status of threads?

41. What is the difference between sleep() and wait()?

sleep(): the method is a static method of the Thread class, which allows the calling Thread to enter the sleep state and give execution opportunities to other threads. After the sleep time is over, the Thread enters the ready state and competes with other threads for cpu execution time. Because sleep() is a static method, it cannot change the machine lock of the object, When a sleep() method is invoked in a synchronized block, though the Thread is asleep, the machine lock of the object is not released, and other threads are still unable to access the object.

Wait(): wait() is a method of the Object class. When a thread executes the wait method, it enters a waiting pool related to the Object and releases the machine lock of the Object so that other threads can access it. You can wake up the waiting thread through the notify and notifyAll methods.

42. What is the difference between notify() and notifyAll()?

43. What is the difference between run() and start() of a thread?

Each Thread completes its operation through the method run() corresponding to a specific Thread object. The method run() is called the Thread body. Start a Thread by calling the start() method of the Thread class.

start() method to start a Thread, which really realizes multi-threaded operation. At this time, you can continue to execute the following code directly without waiting for the Run method body code to be executed; At this time, the Thread is in a ready state and is not running. Then, the Thread class calls the method run() to complete its running state. Here, the method run() is called the Thread body, which contains the content of the Thread to be executed. The Run method ends and the Thread terminates. The CPU then schedules other threads.

44. What are the ways to create a thread pool?

Create a fixed length thread pool. Each time a task is submitted, create a thread until the maximum number of thread pools is reached. At this time, the thread size will not change. When the thread ends with unexpected errors, the thread pool will supplement a new thread.

This is a single threaded Executor. It creates a single worker thread to execute tasks. If the thread ends abnormally, it will create a new one to replace it; Its characteristic is that it can ensure the serial execution of tasks according to the order of tasks in the queue.

A fixed length thread pool is created, and tasks are executed in a delayed or timed manner, similar to Timer.

45. What are the status of thread pools?

46. What is the difference between the submit() and execute() methods in the thread pool?

47. How to ensure the safe operation of multithreading in java programs?

48. What is the upgrade principle of multithreaded locks?

In Java, locks have four states, from low to high: stateless lock, biased lock, lightweight lock and heavyweight lock. These States will gradually upgrade with the competition. Locks can be upgraded but not downgraded. 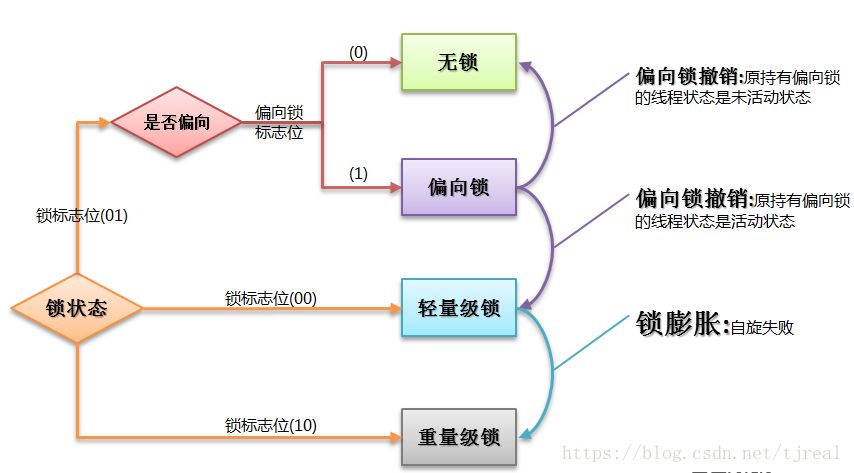 Deadlock is a blocking phenomenon caused by two or more processes competing for resources or communicating with each other in the execution process. If there is no external force, they will not be able to move forward. At this time, it is said that the system is in a deadlock state or the system has a deadlock. These processes that are always waiting for each other are called deadlock processes. It is an error at the operating system level and the abbreviation of process deadlock. It was first proposed by Dijkstra when studying banker algorithm in 1965. It is one of the most difficult problems in the computer operating system and even the whole field of concurrent programming.

50. How to prevent deadlock?

These four conditions are the necessary conditions for deadlock. As long as the system deadlock occurs, these conditions must be true, and as long as one of the above conditions is not satisfied, deadlock will not occur.

Understanding the causes of deadlock, especially the four necessary conditions for deadlock, can avoid, prevent and release deadlock as much as possible.

Therefore, in terms of system design and process scheduling, pay attention to how to prevent these four necessary conditions from being established, and how to determine the reasonable allocation algorithm of resources to avoid processes permanently occupying system resources.

In addition, prevent the process from occupying resources when it is waiting. Therefore, reasonable planning should be given to the allocation of resources.

51. What is ThreadLocal? What are the usage scenarios?

52. Talk about the underlying implementation principle of synchronized?

synchronized can ensure that only one method can enter the critical area at the same time when the method or code block is running. At the same time, it can also ensure the memory visibility of shared variables.

Every object in Java can be used as a lock, which is the basis for synchronized synchronization:

53. What is the difference between synchronized and volatile?

54. What is the difference between synchronized and Lock?

55. What is the difference between synchronized and ReentrantLock?

In addition, the locking mechanisms of the two are actually different: the underlying call of ReentrantLock is to lock the Unsafe park method, and the synchronized operation should be the mark word in the object header.

56. Talk about the principle of atomic?

The basic feature of classes in Atomic package is that in a multithreaded environment, When multiple threads operate on a single variable (including basic type and reference type) at the same time, it is exclusive, that is, when multiple threads update the value of the variable at the same time, only one thread can succeed, while the unsuccessful thread can continue to try like a spin lock until the execution is successful.

The core methods in the Atomic family of classes call several local methods in the unsafe class. One thing we need to know first is the unsafe class, whose full name is sun misc. Unsafe, this class contains a large number of operations on C code, including many direct memory allocation and Atomic operation calls. The reason why it is marked as unsafe is to tell you that a large number of method calls in this class will have security risks and need to be used carefully. Otherwise, it will lead to serious consequences. For example, when allocating memory through unsafe, If you specify some regions by yourself, it may lead to the problem that some pointers like C + + cross the boundary to other processes.

Reflection mainly refers to the ability of a program to access, detect and modify its own state or behavior

In the Java runtime environment, for any class, can you know what properties and methods this class has? Can any method of any object be called

When serialization is required:

a) When you want to save the object state in memory to a file or database;

b) When you want to use sockets to transfer objects over the network;

c) When you want to transfer objects through RMI;

59. What is a dynamic agent? What are the applications?

When you want to add some extra processing to the methods in the class that implements an interface. For example, add logs, add transactions, etc. You can create a proxy for this class, so the name suggests that you create a new class. This class not only contains the functions of the original class methods, but also adds a new class with additional processing on the basis of the original class. This proxy class is not well-defined, but dynamically generated. It has decoupling significance, flexibility and strong expansibility.

60. How to implement dynamic agent?

First, you must define an interface and an InvocationHandler (which passes the object of the class implementing the interface to it) processing class. There is also a tool class proxy (it is habitually called a proxy class because calling its newInstance() can generate a proxy object. In fact, it is only a tool class that generates a proxy object). Use the InvocationHandler to splice the proxy class source code, compile it to generate the binary code of the proxy class, load it with the loader, instantiate it to generate the proxy object, and finally return.

If you want to process an object and keep the original data for the next operation, you need to clone. Cloning in Java language is for class instances.

62. How to implement object cloning?

There are two ways:

1). Implement the clonable interface and override the clone() method in the Object class;

2). The Serializable interface is implemented to realize cloning through object serialization and deserialization, which can realize real deep cloning. The code is as follows:

Here is the test code: