It is difficult to write concurrent code. Although the Java language provides many synchronization and concurrency support, it still needs personal diligence and professional knowledge to write Java Concurrent code without bugs. Java multithreading concurrency best practice is a set of good ideas to help you quickly develop high-quality concurrent code. If you are a novice, you need to be familiar with some basic concepts. Reading this article will be more targeted.

Local variables should always be used instead of creating a class or instance variable. Generally, developers can save memory and reuse by using object instances as variables, because they think that creating local variables in methods will consume a lot of memory each time. The execute () method of the following code is called by multiple threads. In order to realize a new function, you need a temporary Collection collection, which is used as a static class variable in the code, and then clear the Collection at the end of the execute method for reuse next time. The person who wrote this code may think it is thread safe, Because CopyOnWriteArrayList is thread safe, but he doesn't realize that this method execute() is called by multiple threads, then one thread in multiple threads may see the temporary data of another thread, even if collections Synchronizedlist also cannot guarantee the logical invariance in the execute () method. This invariance is that this Collection is a temporary Collection, which is only visible inside the execution of each thread and cannot be exposed to other threads. 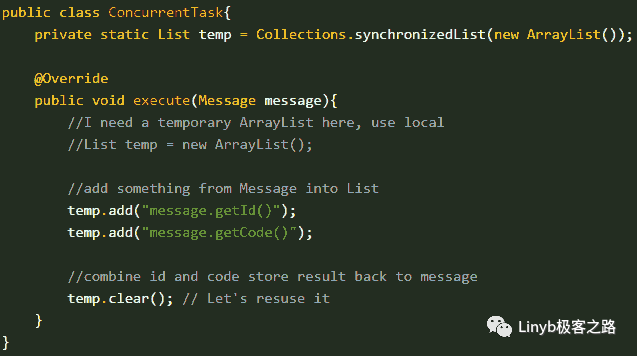 3. Minimize the scope of the lock

4. Use the Excutor of the thread pool instead of directly executing new Thread

Creating a thread is expensive. If you want to get a scalable Java application, you need to use thread pool to manage threads. JDK provides various ThreadPool thread pools and executors.

Since Java 1.5, synchronization tools such as CycicBariier, CountDownLatch and Sempahore have been added. You should give priority to using these synchronization tools instead of thinking about how to use thread wait and notify. The design of production consumption through BlockingQueue is much better than using thread wait and notify. You can also use CountDownLatch to realize the waiting of multiple threads:

8. Use Semaphore to create bounded

In order to establish a reliable and stable system, resources such as database file system and socket must be bound ed. Semaphore is an option to limit the cost of these resources. If a resource is not available, semaphore can block the thread waiting at the lowest cost:

Using synchronized synchronized code blocks will only lock one object, not the whole current method; If you change the fields of a common variable or class, first select the atomic variable, and then use volatile. If you need a mutex lock, consider using ReentrantLock

Static variables will cause many problems in the concurrent execution environment. If you must use static variables, let them be called final constants. If they are used to save Collection, consider using read-only Collection.

The Lock interface is very powerful and fine-grained. There are different locks for read and write operations, which can easily expand and expand. synchronized will not automatically release the Lock. If you Lock with lock(), you can unlock with unlock: